Also known as Sutton Springs, Harrodsburg Springs, and Greenville Springs, the site of the 19th-century Graham Springs Hotel is now within the grounds of Young's Park in Harrodsburg, Kentucky. One of over 70 mineral spring based health resorts in 19th century Kentucky, Graham Springs was among those of national repute. 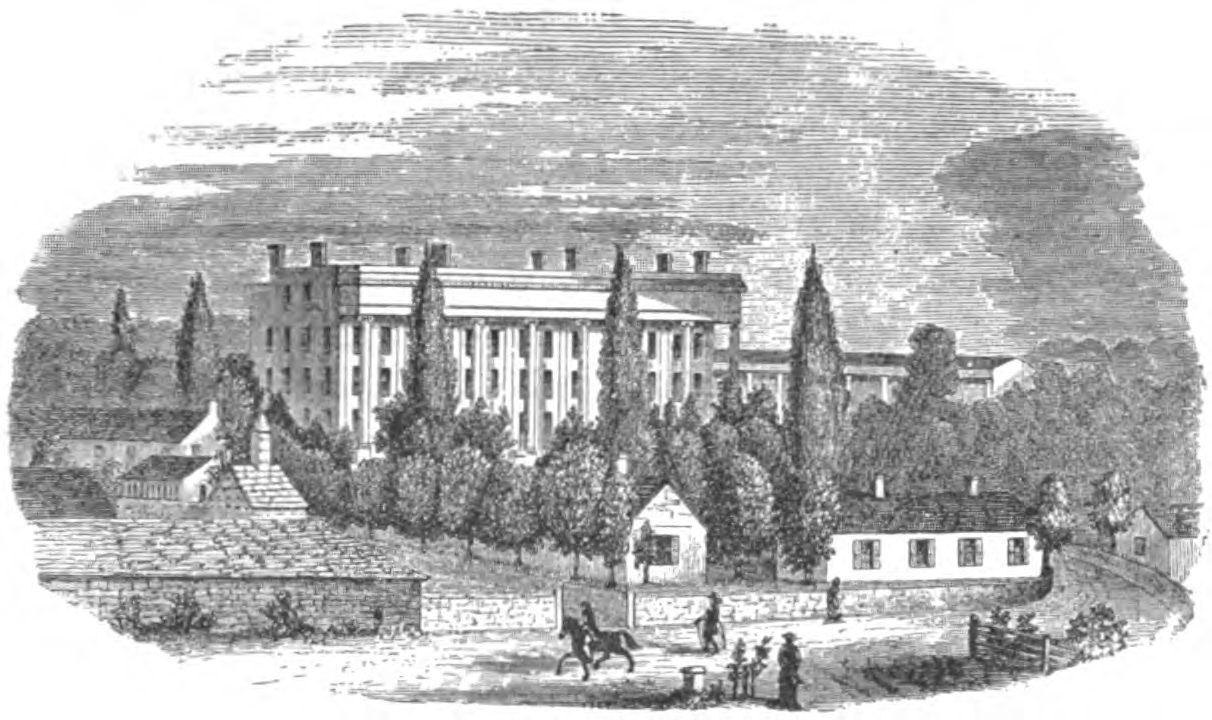 Postcard showing a view of the Graham Springs grounds with the springhouse in the foreground and the hotel visible through the tree line to the upper right (image from Armstrong 2013:81). 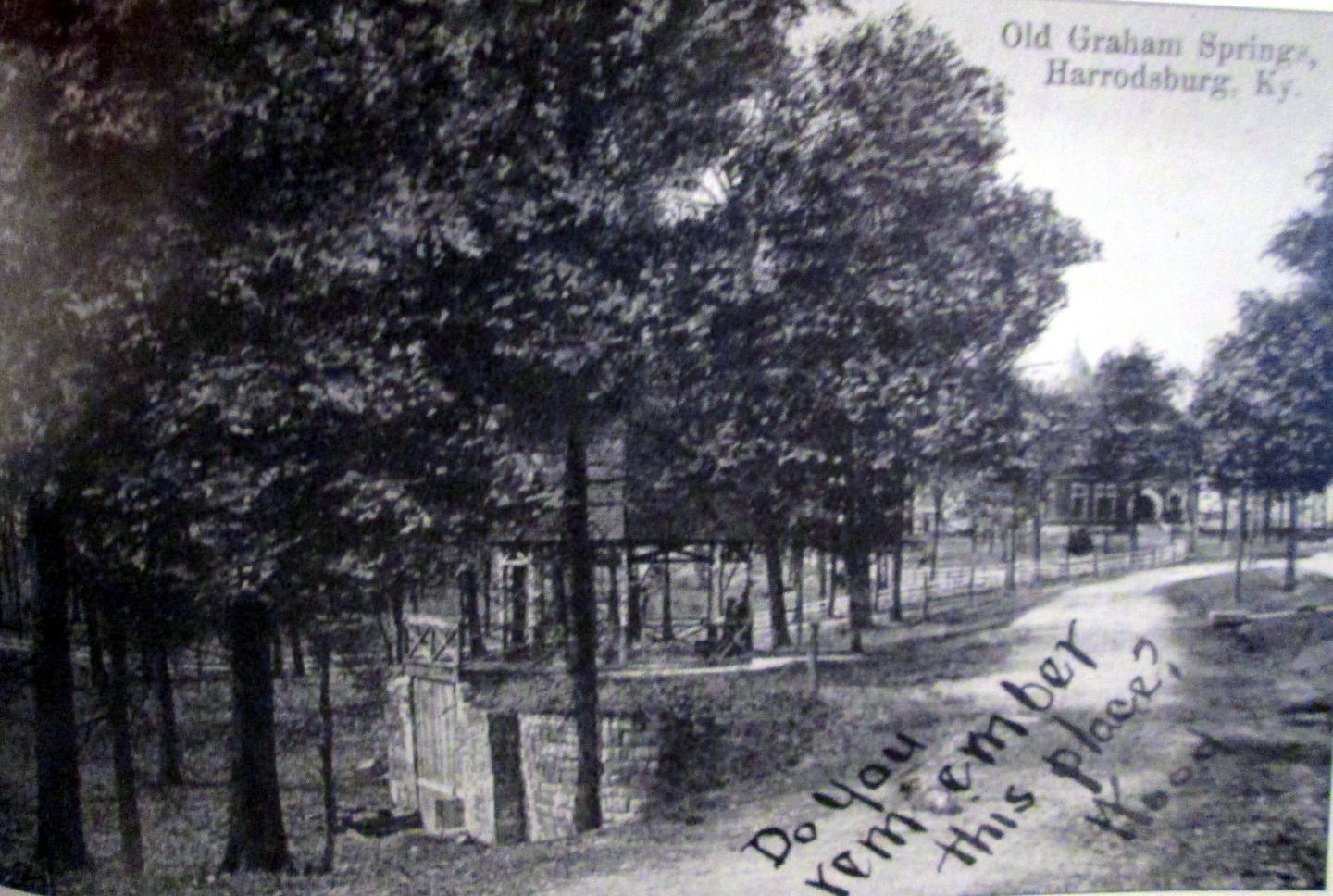 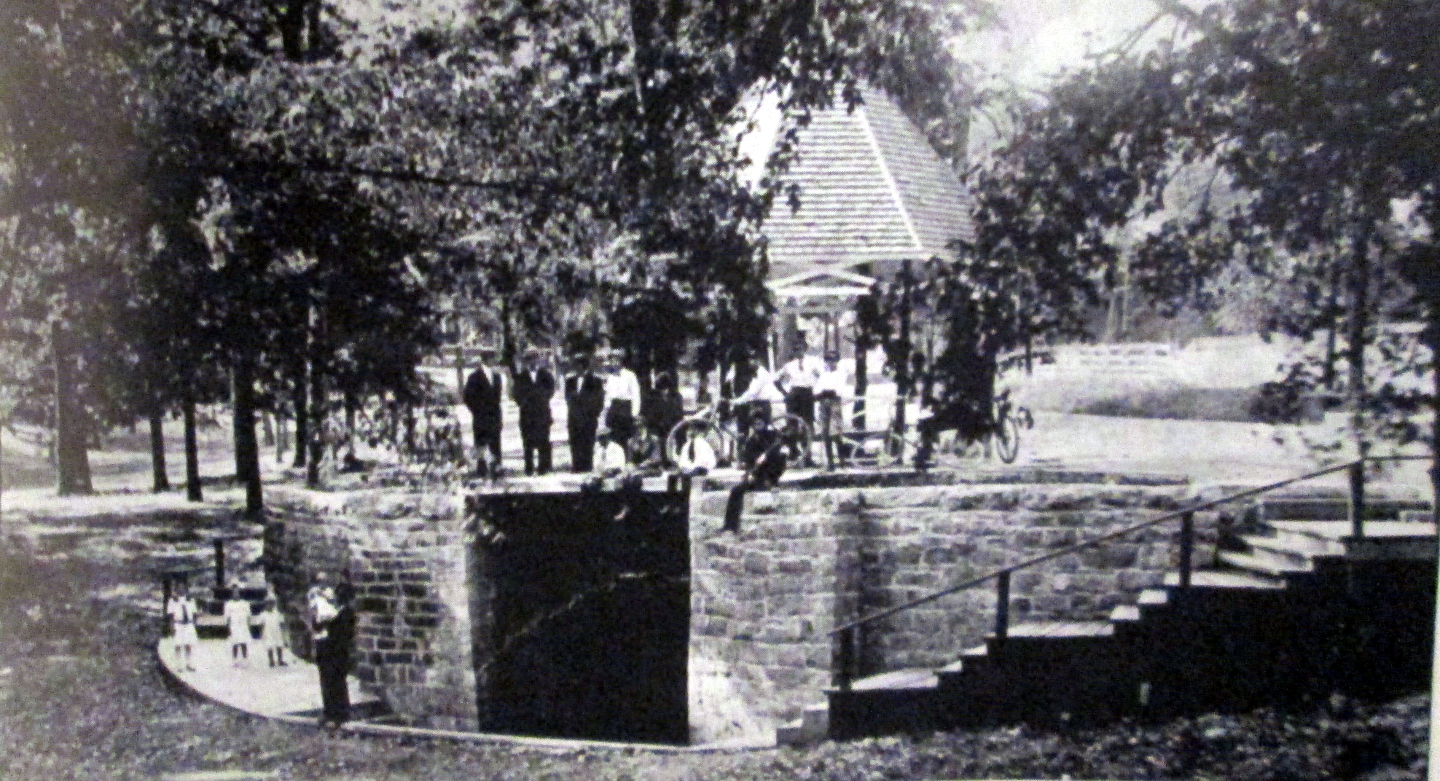 n Mercer County, Harrodsburg Springs (first known as Sutton Spring) and Greenville (or Grenville) Springs were combined into the large resort of Graham Springs in 1828. The resorts were accessible by steamboat and stagecoach, located half a mile from Harrodsburg. In the 1870s, the Kentucky Central Railroad brought guests to Nicholasville, 25 miles from the hotel, where a stagecoach would meet and take visitors on to Harrodsburg [8].

Both springs were considered good for the bowels, kidneys, liver, digestion, appetite, and skin, as well as being a laxative and sedative [8]. The waters were used to cure indigestion, urinary disorders, skin diseases, dropsy [edema], rheumatism, and bone and joint inflammations, and supposedly even improved the mood and strength of the sick, but it was believed that these springs would aggravate heart and lung conditions [7].

Greenville Springs opened in the first decade of the 19th century (owner Tobias Eastland), with nearly 1500 guests (including physicians) registered over the course of the 1808 season. The following year, new buildings were added to the grounds, including a hotel with a 112-foot long porch and a ballroom, as well as stables. The resort was purchased in 1812 by Henry Palmer, who further improved the grounds over the next seven year, adding bathhouses, a bar of "extensive proportions," cottages (extending the capacity to 300 guests at a time), a large dining room, a theatre (advertisements claimed a "regular theatrical company of respectable performers"), and a pleasure garden [3, 6]. The property was purchased by Dr. Christopher Graham in the summer of 1827.

Captain David Sutton opened Harrodsburg Springs as a spa in 1807, managed by John G. Chiles until Dr. Christopher Graham purchased the property (60-70 acres) for $10,000 in November of 1828. Under Graham's management, the two resorts were renamed Graham Springs (though sometimes were still referred to as Harrodsburg Springs), and improvements and expansion began [3]. In 1829, the grounds included a bandstand, a ballroom (50 by 100 feet), bathhouses, two rows of cabins, a battledore [badminton] court, and a bowling alley. The new brick hotel (1842-1843) was four stories high and capable of accommodating 1,000 guests, featuring a long colonnaded promenade, a second ballroom (50 by 100 feet), a 150-person dining room, an "elegant saloon," and a gaming room for chess and backgammon.

The grounds had been expanded to 280 acres by 1850, with an artificial lake, a grotto, an ice-house, an aqueduct and reservoir, walking and riding paths, three additional bowling alleys, bathhouses, warm showers and steam rooms, whole avenues of private cottages for wealthy guests, and a boardwalk through a grove of locust trees led from the hotel to the springs [3, 10]. Octagonal gazebos stood atop the springhouses at the Saloon Spring and Graham's Spring; water was carried by employees from the springs to "treatment rooms" at the hotel, equipped with showers and tub baths [1]. A "professor of dancing" was hired to conduct cotillion parties, fancy dress and masquerade balls were held in the two ballrooms, and Graham owned a band of slave musicians who provided entertainment at the springs during the summer months and were hired out to perform in Louisville during the winter months (three of the musicians escaped to Canada in 1841) [1, 3, 6].

Why Graham sold the property to the United States Government in 1853 is not clear in the historic literature; it was purchased for $100,000 for use as a military asylum for disabled veterans, but fire destroyed the main buildings in 1859 and the patients were moved to a Washington, D.C. asylum. Two years later, it was sold for $120,000 to Captain Philip Thompson, whose intent to turn the property back into a health resort was thwarted by the outbreak of the Civil War. In 1862, the ballroom and cottages of Graham Springs were used as a hospital for wounded soldiers; many of the buildings burned during the war, after which the grounds were converted to pastures and rented out by the United States Government. In 1887, the property auctioned for $19,001 to Edgar H. Gaither who, in turn, sold it to the Kentucky Real Estate and Improvement Association the following year [3, 4, 9]. A brick residence was built on the grounds in 1888 for John Lewis Cassell, which was passed on to Ben Casey Allin [1, 3]. Allin reopened Graham Springs in 1911 and continued operation until 1934, when the Great Depression shut down the business. The property was sold to William A. Caudill, who operated a sanitarium "specializing in colloidal sulphur baths," out of the 1888 brick residence (converted into the New Graham Springs Hotel); it was still in operation in 1942 [3].

A lone grave on the grounds is associated with the hotel era—a young woman died at Graham Springs and was buried under an unmarked stone in the trees near the Saloon Spring, within sight of the New Graham Springs Hotel [3]. The grave has long been a source of local ghost stories.