Founded in 1902, St. Malachy's Roman Catholic Church has been known as the Actors' Chapel since the 1920s, when Father Edward Leonard welcomed the growing theater community in the area by offering services during after-Broadway hours, as well as adding a chapel dedicated to the patron saint of actors, St. Genesius, to the church. St. Malachy's offers religious and community services, concerts, and theatrical performances to the Times Square area and the Theatre District. 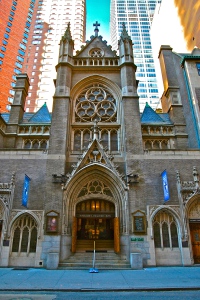 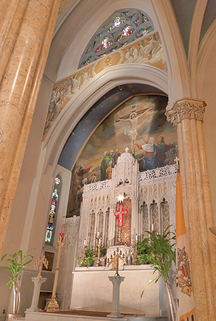 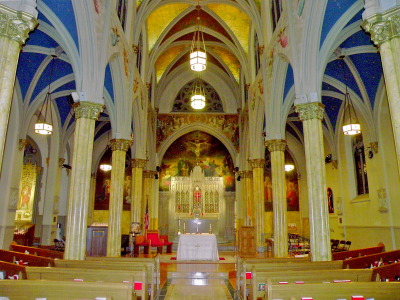 St. Malachy's Roman Catholic Church is named for the Irish monk (also known as Maolmhaodag Uí Morgair) who became bishop of Armagh in the twelfth century. Due to an influx of Irish immigrants to the nearby Hell's Kitchen neighborhood, Sacred Heart Church needed an auxiliary church. That church, founded in 1902, was St. Malachy's. Architect Joseph H. McGuire designed the "Carpenter's Gothic" building, a brick and limestone building on a concrete foundation, reinforced with steel and iron. Leading up to the 1920s, the Theatre District grew up around Times Square and Broadway, bringing new parishioners to St. Malachy's services: actors, dancers, musicians, craftsmen, and tourists. Father Edward Leonard reached out to these new congregants by offering late-night Mass and confession services so they could attend after shows let out. St. Genesius, patron saint of actors, became the central figure in a new chapel constructed in 1920 inside the church entry, earning St. Malachy's the name "Actors' Chapel."  The addition was designed by Thomas J. Duff. Architect Robert Reiley designed an additional wing on the west side of the church in 1930.

St. Malachy's was the site for the wedding of Douglas Fairbanks and Joan Crawford, the baptism of Herb Shriner, and the funerals of Rudolph Valentino and Tennessee Williams. Attendees of the church have included George Cohan, Spencer Tracy, Perry Como, Irene Dunne, Florence Henderson, Elaine Stritch, Rosiland Russell, Danny Thomas, Bob and Dolores Hope, Ricardo Montalban, Fred Allen, Don Ameche, Cyril Ritchard, Pat O'Brien, and Jimmy Durante. Antonio Banderas attends Mass regularly at St. Malachy's. It is a Broadway tradition to light a candle at the Actors' Chapel for the success of a show on opening night.

During the 1960s, Madison Square Garden moved and many neighborhood night clubs whose entertainers attended St. Malachy's closed. The neighborhood deteriorated as drugs, prostitution, pornographic shops and theaters, and crime moved in. St. Malachy's parishioners moved away or feared to attend services in the neighborhood, and vandalism and theft occurred on a weekly basis. Father George W. Moore was assigned to St. Malachy's in 1976, and began an interfaith effort to improve the quality of life of the impoverished elderly in the neighborhood, working with local and community organizations. With the support of the Broadway Association, the League of American Theaters and Producers, Actor's Equity, the Schubert Foundation, and the Times Square Alliance (among others), programs were instituted for helping the elderly, poor, and homeless, and educational childcare services were provided for members of the acting community. These programs have grown and flourished under subsequent Fathers Richard Baker and Peter Colapietro.

In addition to its religious and community services, St. Malachy's also offers musical concerts including organ recitals on the Paul Creston Memorial Pipe Organ; instrumental, choral, opera, chamber, symphonic, and Broadway performances; and classical and jazz performed by the Broadway Chamber Players, comprised of Broadway pit musicians who are members of the parish. St. Malachy's artistic director and resident playwright, Jo Ann Tedesco, began theater activities at the Actors' Chapel in 2011. Three groups give performances at St. Malachy's. One is The Saint Genesius Society, which provides actors, directors, and writers with opportunities to try new materials, acting techniques, and work on auditions or roles for free. The second is Actors Chapel Presents, consisting of readings of original plays presented by professional actors and directors, with Q&A sessions afterward. The third is Broadway After Hours, where readings, musicals, and one-person shows are presented at midnight, after the 11 pm Mass.