The Mission San Fernando Rey de España is one of the earliest Spanish Franciscan missions established in California. Founded in 1797, it was hugely successful as a religious, cultural, and agricultural center in the San Fernando Valley for its first several decades. Despite maintaining the presence of Franciscan friars and Indian neophytes even after the secularization of the missions in 1834, the mission was confiscated and sold by Pio Pico--the last Mexican governor of Alta California--in 1845. A year later, American forces seized Los Angeles during the Mexican War. The mission was returned to the Catholic church in the 1860s in state much reduced, but massive restoration efforts during the 20th Century returned much of tis former architectural glory. The convent has been added to the National Register of Historic Places and is a recognized California Historical Landmark.

The church destroyed after the 1812 earthquake, which also affected a number of the other Southern California missions. 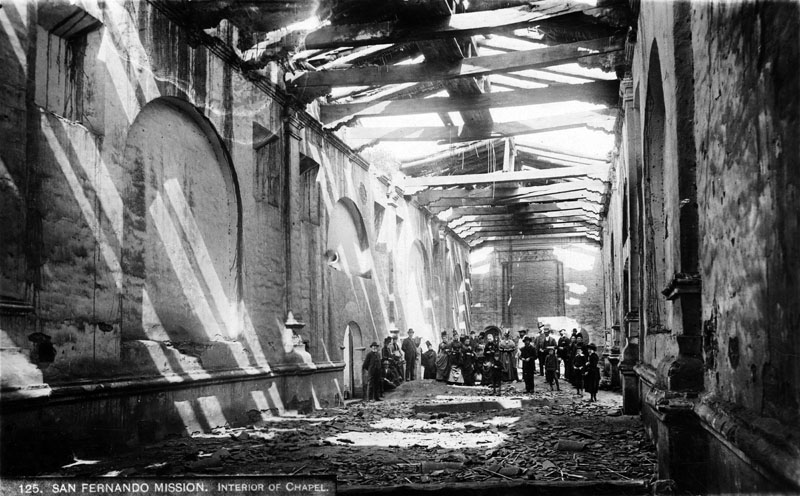 The mission in use in the 1920s (www.waterandpower.org) 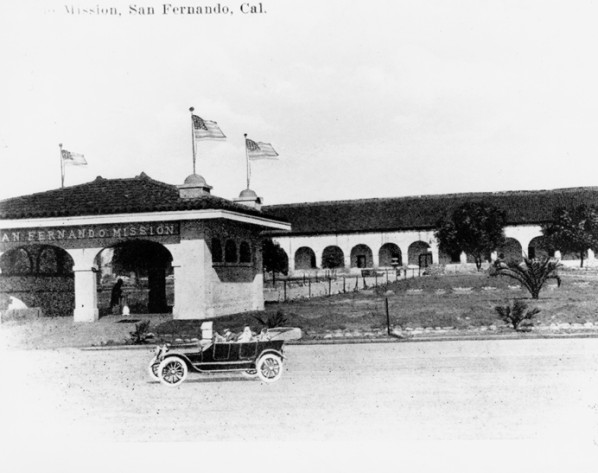 A sketch of San Fernando in the 1860s-70s by Edward Vischer, a German immigrant to Mexico whose prolific portraits of California life have been invaluable to scholars. Courtesy of the Claremont Colleges. 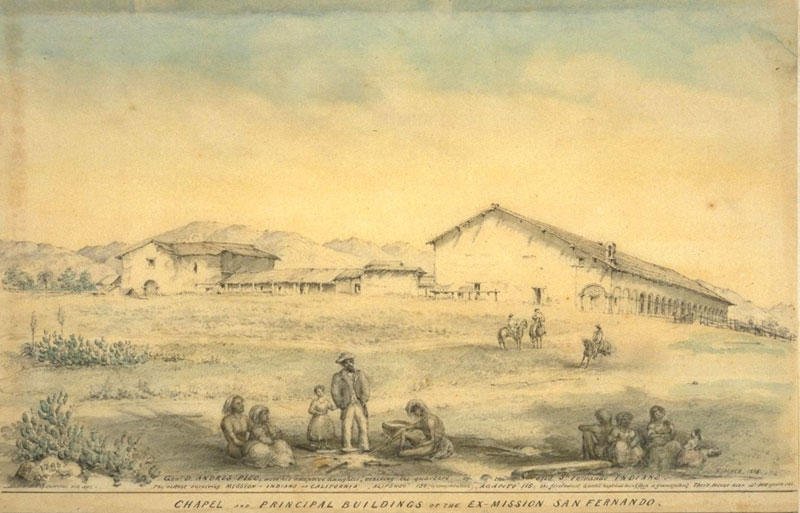 Vischer's drawing of the Mission after its confiscation by Governor Pio Pico, who made personal use of the grounds before selling the property. Courtesy of the Claremont Colleges. 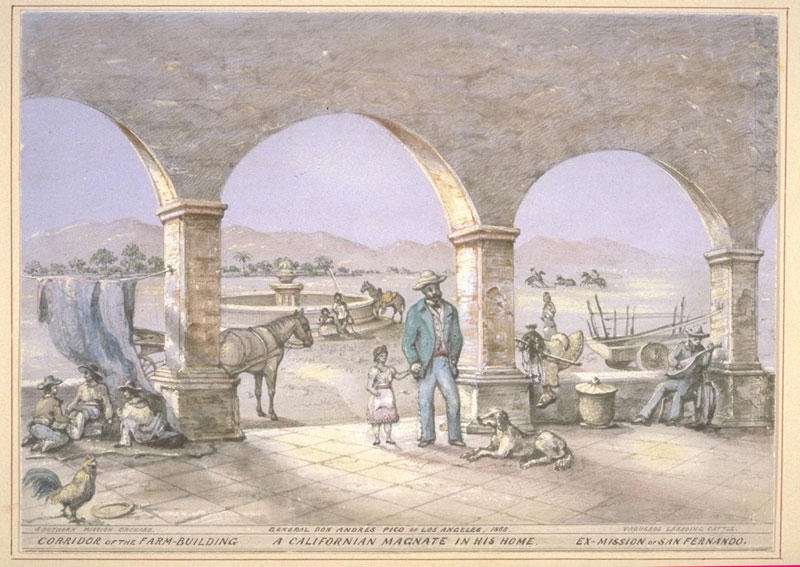 Governor Pio Pico and his family. Pico recognized the influx of Americans into California as a commercial opportunity, and sold much of the territory's public lands to his family and friends. They made a fortune in the coming decades. 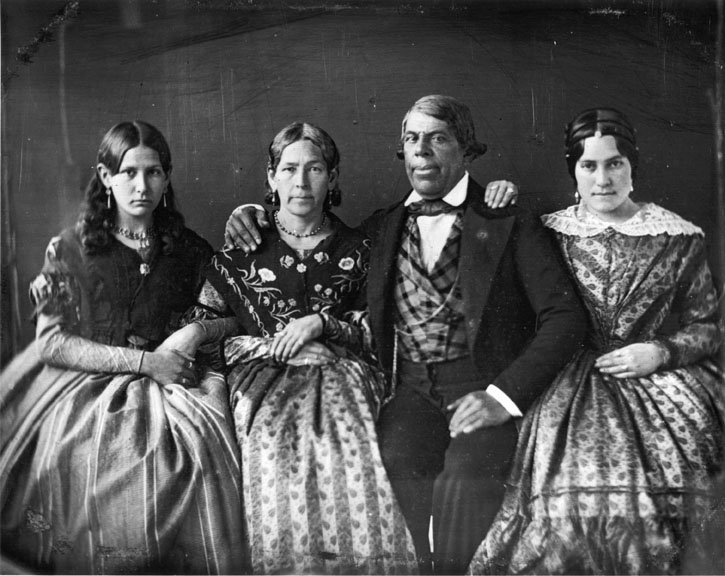 A painting of Mission San Fernando by Oriana Weatherby Day, made sometime between 1877 and 1884. 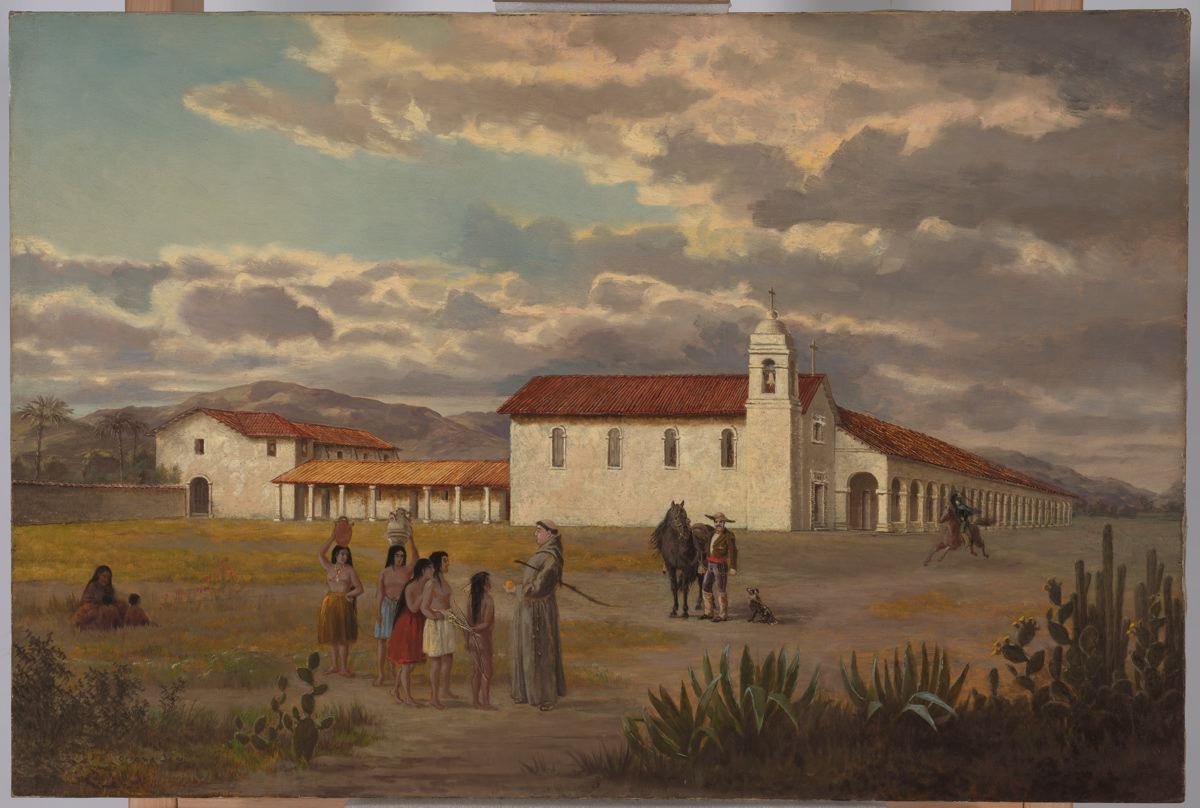 US Department of the Interior elevation drawings of the Mission. 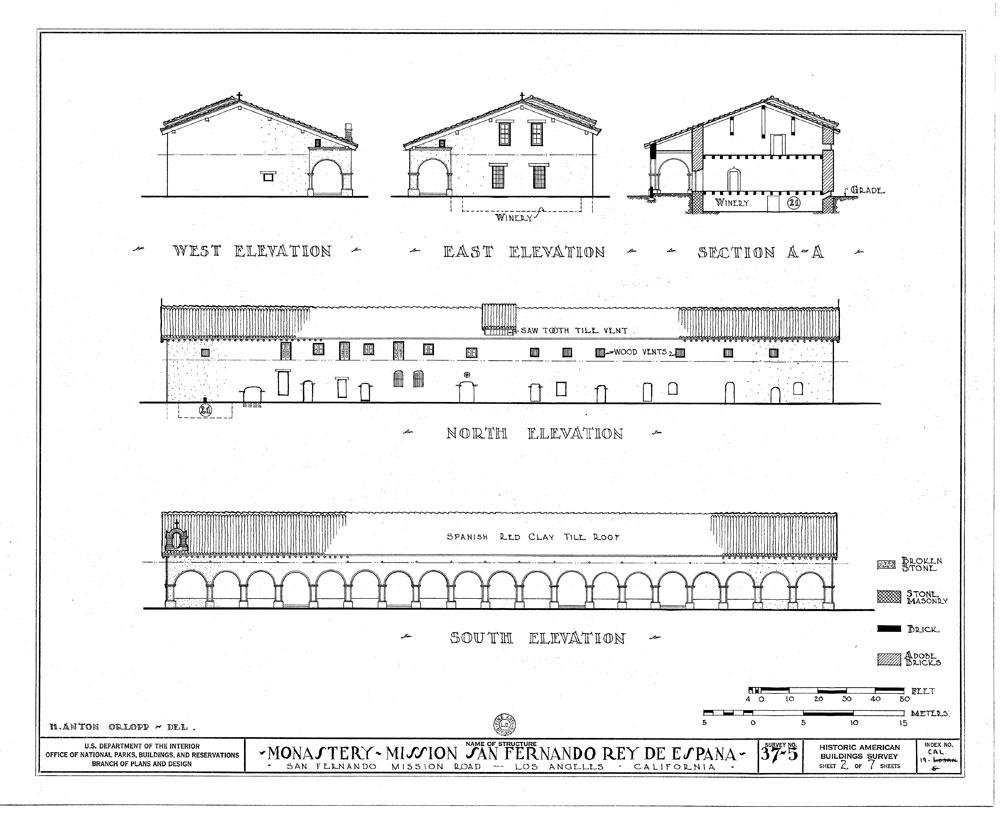 The San Fernando Valley was discovered in 1769 by the first European expedition in California. The Spanish soldier Gaspar de Portolá led a party of armed men into the unknown territory, discovering the valley while en-route to San Francisco Bay. Large areas of the newly-discovered territory, then known as Alta California, were settled. The pueblo of Los Angeles founded in 1781 and flowered under the influence of nearby Mission San Gabriel Arcangel. Seeking an intermediate mission to bridge the gap between Arcangel and new missions in Santa Barbara, on September 8th 1797 the Basque missionary and governor of the Alta California mission system, Padre Fermín de Francisco Lasuén de Arasqueta, baptised ten Native American children and founded the San Fernando Mission.  The complex was the seventeenth mission built in California, and was named after the 13th century saint-king of Spain, Ferdinand III.

The original complex had a quadrangle layout, complete with a bell tower and olive mill. A church was built in 1791, but was replaced with a series of progressively larger chapels as the congregation grew. By 1804 over one thousand Native Americans resided in the mission. The third chapel was damaged by an earthquake in 1812, and replaced with a new church in 1818. The mission was subsidised through trade between the Native American residents and merchants travelling along the same route that would one day become the El Camino Real, though this trade frequently waxed and waned. During the 1830s  Alta California was being split between Spanish colonials and independent Mexicans, and the San Fernando mission was confiscated by the former in 1834. However, ownership of the area frequently changed between the two, disrupting the lives of the monks and laypeople living there. The Native American converts gradually left, and by 1847 the mission was completely abandoned.

A gold rush occurred in an adjacent ranch in 1842, and the region was soon filled with prospectors that frequented the San Fernando church. Their motivation, however, was hardly spiritual and the chapel floor was dug up on more than one occasion by treasure hunters. During the 1850s and 1860s it was used as a stagecoach station for the Butterfield Stage Lines, and by the end of the century it was being used as a farm. In 1923 it was reclaimed by the Missionary Oblates of Mary Immaculate, who have operated the mission as a working church ever since.

The original adobe buildings have been rebuilt many times over the long time that the mission has existed, and the Oblate priests have been actively restoring the property despite having to completely rebuild the buildings after the Sylmar earthquake in 1971. One of the most splendid structures is the long “Convento” building which served as Padre Lasuén's quarters and a guesthouse, and is the largest freestanding adobe structure in California. A colonnaded cloister faces the roadside, the rounded arches holding up a terracotta roof.

Daily 9am to 4:30pm Closed Christmas and Thanksgiving