Tecumseh was one of the most influential Native American leaders of the early 19th century. As a leader of the Shawnee, Tecumseh organized his people to oppose the loss of their land to settlers of European descent throughout the early years of the American Republic. Tecumseh was born in what is now western Ohio and the son of the Shawnee war chief Pucksinwah and his Creek wife Methotaske. Although there is some debate about the exact location of Tecumseh’s birthplace, he was likely born near present-day Xenia in Greene County, Ohio. Visitors to this historical marker are likely very near the location where Tecumseh was born, as this was one of the areas where his band of Shawnee camped at the time of his birth.

The marker is near the parking lot for Old Town Reserve Park. 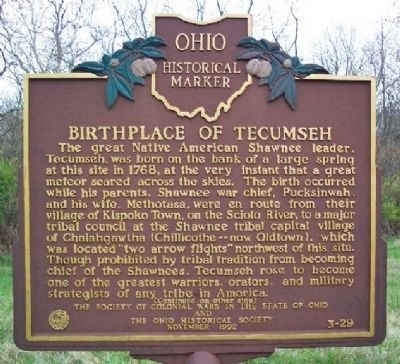 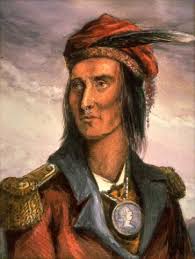 Map of the Oldtown Reserve Park 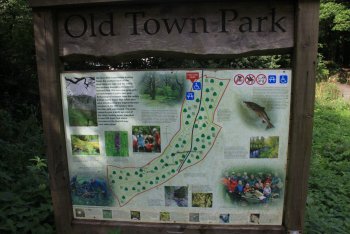 During the early years of the 19th century, Native American territories were increasingly endangered by the expansion of white colonization. The previous boundary, which had been imposed by Britain following the French and Indian War, was no longer enforced and Americans began to expand westward beyond the Appalachian Mountains. Many of the Native American tribes across the Ohio territory were resistant to the expansion of Americans into their lands. The Shawnee tribe was one of the major Native American tribes who were adamantly opposed to the white expansion into western territories.1 The Shawnee tribe had lived in the Ohio Valley for hundreds of years as part of the unified Shawnee Nation. In 1832, after decades of fighting with American settlers, the Shawnee were forced from their lands throughout the Ohio Valley and were relocated to Oklahoma.2

Tecumseh was born near present-day Xenia, Ohio, although there is some debate as to where the exact location of his birthplace is. Some historians claim that he was born in Chillicothe, while others assert that Tecumseh was actually born along the way to Chillicothe.3

Tecumseh grew up during the border warfare between the Shawnee and white settlers in the Ohio Valley. Tecumseh’s father, Pucksinwah, who was a minor war chief, was killed in the Battle of Port Pleasant which occurred during the French and Indian War. Tecumseh’s mother, Methotaske, left him in Ohio to be raised by an older sister, Tecumpease, and moved to Missouri to live with other Shawnee.4 While still a teenager, Tecumseh joined a confederation of other young Native Americans, which was founded by the Mohawk Chief Joseph Brant. Brant asserted that the tribes should work together to stop white settlers from moving into their lands.5 While part of the confederation, Tecumseh attacked white settlers as they traveled by boat along the Ohio River. He was successful in halting the advancing settlers for a brief time; however, he became appalled by the violence of both white and Native Americans.

In 1791, Tecumseh joined forces with the Shawnee chief Blue Jacket to lead a scouting mission against U.S. General Arthur St. Clair at the Battle of the Wabash.6 During the battle, 952 of the 1,000 American troops were killed. In 1794, Tecumseh mounted a failed attack against Major General Anthony Wayne at Fort Recovery. Tecumseh’s forces were later defeated at Fallen Timbers. Following the defeat, Tecumseh refused to attend the negotiations or accept the Treaty of Greenville.7 He asserted that land could not be signed away because it was a common possession of Native Americans. In 1808, Tecumseh moved to Indiana to join forces with his brother Tenskwatawa, a Native American religious leader known as the Prophet.8

Tecumseh used his speaking skills to transform his brother’s religious movement into a highly political movement which discouraged Native Americans from assimilating into the white culture. Tecumseh and his followers were headquartered near the juncture of the Tippecanoe and Wabash rivers in present-day Indiana.9 Tecumseh worked to recruit members of different tribes in order to have a united confederation. In 1811, Governor William Henry Harrison authorized a force of over 1,000 men to march on Tecumseh’s headquarters. After the Battle of Tippecanoe, the victorious Americans burned the Native American town, leaving Tecumseh with a broken confederation.10

On June 1, 1812, the United States declared war on Britain and the Native American tribes of the Northwest Territories were split along different alliances. Tecumseh allied with the British and moved his forces to Michigan to assist with the siege of Detroit. In the spring of 1813, Tecumseh joined forces with British Major General Henry Procter and they led a siege of Fort Meigs, which was commanded by William Henry Harrison.11 As Harrison led a counterattack, Procter and Tecumseh fled into Canada to the Thames River, near present-day Ontario. Procter promised Tecumseh that he would send reinforcements; however, none ever arrived and Tecumseh’s forces were quickly overrun.12 Tecumseh was killed in the attack and his body was secretly buried in an unmarked grave. His death marked the end of Native American resistance in the Ohio River Valley.

Visitors to the historical site of Tecumseh’s birth can find a historical marker detailing the birthplace. The marker also provides visitors with a brief synopsis of Tecumseh’s life and his achievements.13