The Texas State Capitol was designed by architect Elijah Myers whose work included the designs used in the creation of the Michigan and Colorado capitol buildings. The Texas capitol building was completed in 1888 and placed in the National Register of Historic Places in 1970. In 1986, it was designated a National Historic Landmark for its "significant contribution to American history."

The view from the front entrance of the gorgeous capitol building 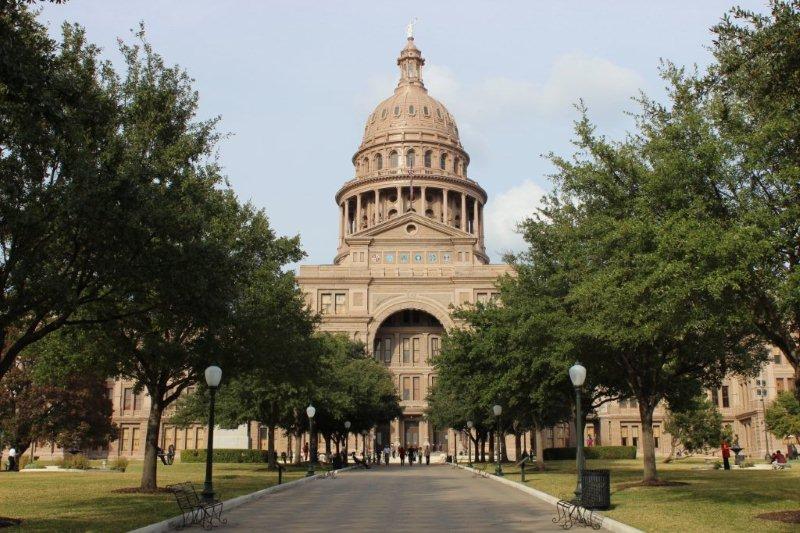 The Goddess of Liberty statue ceremony

The Texas State Capitol Building in downtown Austin is often recognized as one of the nation’s most beautiful state capitol buildings. The Capitol Building is located at Capitol Square which was originally selected as the site of the Capitol of the Republic of Texas. It was completed in 1853. However, the Greek Revival structure burned in late 1881 leaving the state of Texas without a fitting seat of government. Fortunately, The Capitol Board, who were in the building at the time of the fire, already had plans for a new structure.

Construction plans began in January 1882. To mark the start a groundbreaking ceremony was held a month later. Foundation work on the building began in March 1885. The ceremonious environment continued over the years until the completion December 8, 1888. E.E. Myers, known for his work on the Michigan and Colorado Capitols, was selected to design the new building. Contractors were offered an interesting trade in exchange for their expertise-- three million acres in the Texas Panhandle deeded to them when the work was finished.. From the foundation there gradually rose a visual marvel. The exterior was supposed to be limestone originally, but the stone that was quarried streaked when exposed to air. Some alternately proposed granite, a harder, more expensive stone. The debate stunted the construction process for almost two years. But, a decision, after long discussions, was finally reached. Builders settled on “Sunset Red” granite graciously donated by its owners in what is now Marble Falls, Texas.

The structure of the walls and the dome were beginning to take shape by mid-1887. When the dome was completed, the Goddess of Liberty statue was placed atop it. The Capitol measured more than 310 feet high, with 392 rooms, 924 windows, and 404 door. The labor was daunting. It took more than 1,000 people, including engineers, contractors, laborers, and craftsmen seven years to build at a cost of $3,744,600, which was a vast fortune for the time. The intricate structure is the largest of all state capitol buildings, and it is the second largest in total size behind only the Federal Capitol in Washington D.C. As everything always must be “bigger in Texas,” The Texas state Capitol Building actually surpasses the National Capitol in height, rising seven feet higher.

On April 21, 1888, San Jacinto Day, the Capitol formally opened to the public. The next month was full of celebrations and festivities. Celebrants marked the dedication and were organized to celebrate the “splendor that was befitting the glory of Texas and the grandeur of that building.” Patriotic displays were featured throughout the night. Crowds lined Congress Avenue and filled the Capitol grounds to watch parades and ceremonies.

Today, the building sits in the heart of Austin. Tourists flock to the site to visit and explore the history of each politician and political act made in the building. It is a fitting emblem of a state that once declared its total independence from the Union … where history continues to be made.