This regional history museum located in the historic former county courthouse. Constructed in 1910, this courthouse replaced a previous structure built in 1882 that was destroyed by the earthquake of 1906. This building served as San Mateo County's courthouse until the 1990s, and the museum opened in the vacated building in 1998. Highlights of the museum include exhibits that preserve and share the history of Native Peoples and early pioneers of European descent, exhibits dedicated to the history of this section of California during times of war, and exhibits that center on the lives or ordinary residents and leaders of government and industry. The museum is also home to a local history archive and hosts events throughout the year. 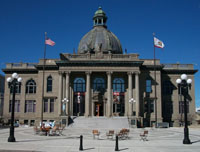 The Historical Association operates this museum in addition to several historical sites throughout the county such as the Sanchez Adobe in Pacifica which was built in the 1840s and is now home to a  historically-themed county park and the regionally famous Rancho Day Fiesta. The Association also operates the Woodside Store- a restored mercantile in Woodside that served loggers that arrived in the region in the 1880s during the state's lumber boom.