Huhugam Ki, meaning "House of the ancestors," describes the museum, which is constructed of adobe and desert plants, reflecting the beauty of the Southwest. The Huhugam Ki Museum offers exhibits that share this unique heritage, from the days of the ancient Hohokam to the achievements of today. Baskets, pottery, photos and other articles create an understanding of a people who are enriched by the strength of their ancestors. 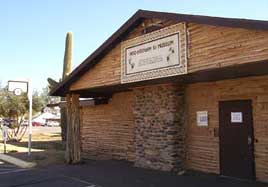 The Salt River Pima-Maricopa Indian Community is comprised of two Native American tribes: the Pima, or "Akimel Au-Authm," (River People), and the Maricopa, or "Xalychidom Piipaash," (People who live toward the water).

The Maricopa tribes were small bands that lived along the lower Gila and Colorado rivers. In the early 1800s they migrated toward Pima villages. The Pima, known as a friendly tribe, established a relationship with the Maricopa. Both tribes provided protection against the Yuman and Apache tribes.

The Pima believe they are the descendants of the "Hohokam," (those who have gone) an ancient civilization who lived in Arizona nearly two thousand years, dating as far back as 300BC. The Hohokam farmed the Salt River Valley and created elaborate canal irrigation systems throughout the valley area; that system, now modernized is still used today.

The Pima were strong runners, basket weavers and farmers who could make the desert bloom. They served as trusted scouts for the U.S. Cavalry and continue to serve their country today in various forms of the armed forces.

The Pima are well known for their basket weaving techniques, intricately woven, they are made watertight. The Maricopa, known for their red clay pottery work, created various forms of jars and bowls. Both forms of artwork are made of natural materials and can be viewed at the Community's Hoo-hoogam Ki Museum.