The life-sized statue of Francis Webster stands in front of Bulloch Drug. Created by Jerry Anderson, this statue shows Webster dressed in the typical wear of the time period (a leather three-piece suit). Webster traveled to Utah in 1856 where he became instrumental in the development of Cedar City as a business leader, member of the City Council, and mayor.

The Francis Webster Statue was dedicated in 2008. 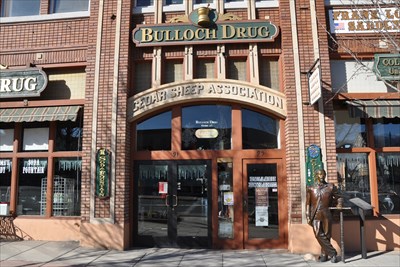 The statue of Francis Webster watches over Main Street in Cedar City, Utah.  Erected by Jerry Anderson, this statue is loccated in front of Bulloch Drug and was dedicated on August 30, 2008.  The statue is a favorite stopping point of those visiting and current residents of Cedar City.  Residing almost on the edge of the street, it is the imposing figure that initially catches the eye of passersby.  However, it is the plaque in front of him, detailing his history, that further draws people in.  He was instrumental in the creation of Cedar City when he initially arrived in 1856.  He was the Mayor twice, served on the City Council, and eventually went on to serve on the lower house of the Utah Territorial Legislature.

Francis Webster was born in England in 1830, but he always knew he was destined for greater things in life.  His transformation into the man who would become a key player in Cedar City history began while he was a part of the Martin Handcart Company which trekked across the plains into Utah.  This trek was one of the most dangerous and destructive journeys that the Mormon pioneers would go on to free themselves from religious persecution and it was the origin of Francis Webster’s faithfulness and ever-growing love for the church.  He and his pregnant wife left Iowa and went together to Utah so they could practice the LDS religion without fear of being shunned for their beliefs or worse, killed for those very beliefs.


The handcart company seemed doomed from the start; they began late in the summer which would spell trouble for them, as an early winter plagued the company.  On top of early winter, Francis Webster suffered from a terrible case of diarrhea.  However, he did not let this stop him.  Webster pulled his handcart as far as he could each day, until one day he felt that he could not pull any further.  He sat upon the ground and had a blessing administered by the Elders in the trek.  For him, this gave him “renewed vigor,” and he was able to continue on the journey, relieved of all symptoms that had once plagued him.1  While on the trek, Webster’s wife Ann Elizabeth--better known as Betsy--brought their first daughter into the world on September 27.  While Francis’s earlier journal entries make no mention for his choice of taking his almost seven-month pregnant wife across the plains, Betsy accepted his decisions full-heartedly and wanted to serve the best interests of her husband.

Their sacrifices preceding the trek, as well as during it, are remembered with respect.  Leading up to the Martin Handcart Company’s journey across the plains, the Websters had enough money to cross in a wagon from Francis’s success mining for gold in California.  Wagons often had better luck when making the perilous journey to Utah, and with his wife as pregnant as she was, Francis greatly considered using his money to travel by wagon.  However, both of them agreed that it was better to use their money elsewhere.  Therefore, Francis and Betsy opted to travel by handcart and donate the funds they would have used to other pioneers who were not as fortunate with money as they were.

During the early portion of the journey, they also evidenced a different attitude than some in the company when things did not go according to plan. While they may have had as much or more reason to feel sorry for themselves as any other member of the company, they instead looked for ways to better the situation rather than dwelling upon the negative.2

Francis also is mentioned in another man’s journal as they continued on the horrible trek to Utah.  James Godson Bleak, a fellow member of the Martin Handcart Company, noted, that he was unable to pull his own handcart, so he was persuaded to leave it.  Bleak wrote, “Br Francis Webster very Kindly persuaded me to get on his handcart and drew me 17 miles.  For which Kindness I feel grateful, and pray God to bless them with health and strength.”3  The trek did not arrive in Utah until November 30, due to the excessively early winter that had struck while they were trekking across the plains.  Almost immediately following, Francis, Betsy, and their newborn, Amy Elizabeth, continued on their journey from Salt Lake City south to Cedar City, Utah.

Francis Webster never regretted his trek across the plains by handcart because of the lessons that it taught him and how it strengthened his testimony in his beloved religion.  It was this testimony given during a Sunday School lesson that would mark Webster as a prominent figure not only in the history of Cedar City but in that of the LDS church.  He spoke of the connection he made with God through his suffering, thereby becoming a greater man because of it.4  When studying his personal accounts he lists the date and event that was prominent for himself.  He included the different elected positions he held within the community.  Webster was elected Mayor twice in Cedar City, served on the City Council, was a member of the Cedar Cooperative Sheep Association, sat on the Quorum of the Seventy for the LDS church, and was often the president of the Agricultural Society of Cedar City.5

As one of the builders of Cedar City and a very important figure within the LDS religion, Francis Webster was a natural choice for local commemoration.  The requirements to have one’s likeness made into a statue surrounding Cedar City were hefty:  “the statues will be limited to figures who made a significant contribution in the years between the City’s founding and the arrival of the railroad in 1921.”6  His contributions--and those of three other members of the community--were made everlasting through this project as Cedar City memorialized him on Main Street.

This short drive through Cedar City begins at the Frontier Homestead Museum and State Park and includes several historic homes, museums, churches, and other landmarks.