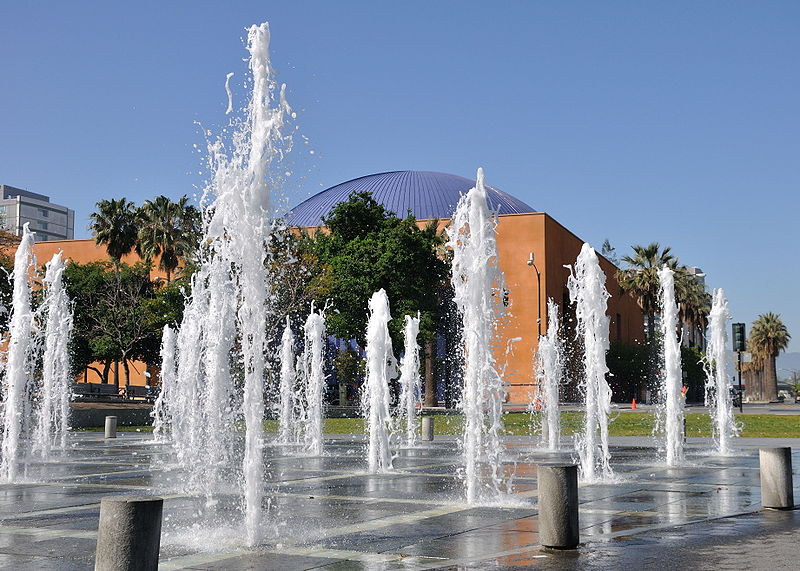 San Jose City Hall on the Plaza, 1887 (image from the city of San Jose) 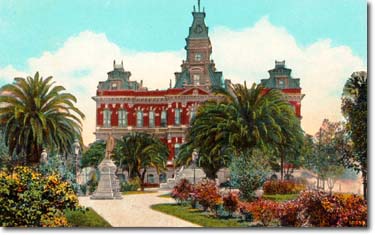 The Plaza in 1900, with St. James Cathedral and historic post office (now the San Jose Museum of Art) in background (image from the city of San Jose) 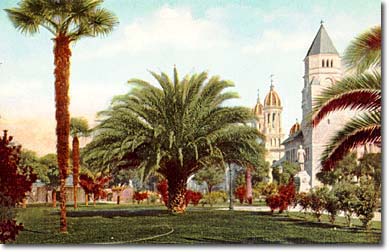 The Plaza and City Hall in 1912 (image from Stanford University) 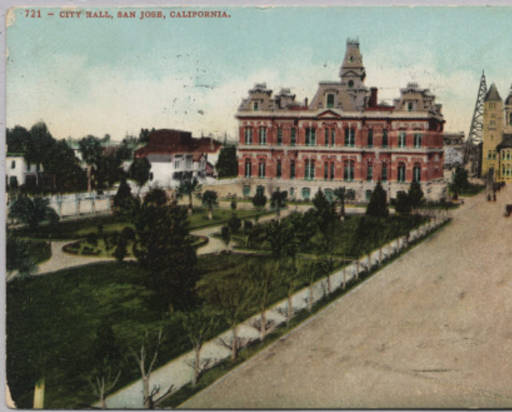 Aerial view of the Plaza circa 1930 (image from Mercury News) 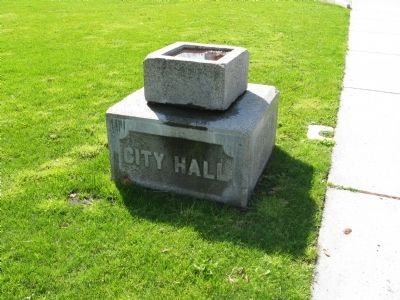 The History of San Jose's Plaza
As Russian explorers began scouting northern California in the late 18th century, the New Spanish (Mexican) government received permission from Spanish crown to expand into the area. The Ohlone people (who had settled the Santa Clara Valley region by as early as 8000 B.C.E.) initially welcomed the Spanish and the priests who established twenty-one Franciscan missions in the area [4]. The first European civilian, non-mission settlement in California was El Pueblo de San Jose de Guadalupe, chartered by the King of Spain [1; 4]. Officially founded on November 29th, 1777, San Jose's initial population consisted of nine soldiers, five settlers and their families, and one cowboy [4]. The original town site (at present-day First and Mission Streets, the site of today's City Hall) was abandoned due to flooding in favor of the higher ground around where the Plaza de Cesar E. Chavez stands today [1; 2]. The Plaza, in fact, was the heart of the original relocated Pueblo de San Jose, making it "the oldest continuously used public open space in the city," [5]. The original St. Joseph's church and the Juzgado (court) stood at the edge of the plaza, which functioned as a market square, parade ground, racetrack, and court for the rather brutal game of correr el gallo [2; 5].

Mexico broke away from Spain in 1821, but San Jose refused to accept Mexican rule for another four years [2; 4]. On July 14, 1846, during the Mexican-American War, Captain Thomas Fallon raised the United States flag over the town hall of San Jose, then a small town populated by Spanish Californians, Mexicans, Peruvians, Chileans, and Indians [4]. In the following two years, the town was surveyed by Thomas Campbell, then Chester Lyman, who followed the existing grid street pattern still in place today, as well as establishing the elliptical park containing the Plaza [1; 5]. The first State Capitol bordered the expanded plaza, as the California gold rush of 1848-1849 expanded the population and commercial development of the city, and the functions of the plaza grew to include public hangings [4; 5]. By the 1860s, San Jose had a significant Chinatown along Market Street bordering the plaza which so-called "Nativist" Euro-Americans found objectionable and which "mysteriously" burned to the ground in 1887, just in time for the erection of City Hall on the plaza [2; 4; 5].

The City Hall building, designed by Theodore Lenzen, was built between 1887 and 1889, with the stipulation that no Chinese labor would be used in its construction. The building met with heavy criticism from the American Institute of Architects, its style described as "bastard Baroque." Its ground floor housed the city jail, with Council meetings held upstairs. A cast-iron drinking fountain and statue of prohibitionist Henry D. Cogswell (donated by Cogswell himself) stood in City Hall Park (the plaza) until 1944, when it was melted for scrap metal for the war effort. Also during the Second World War, a U.S.O. Hospitality House was constructed by volunteers in a single day at the south end of Plaza Park for service men and women passing through San Jose [2]. The objectionable-looking City Hall was demolished in 1958 and a new City Hall built on the original 1777 site of the Pueblo de San Jose [2; 5].

Plaza Park was renamed in 1993 to honor resident César E. Chávez (1927–1993), who served in the Navy in World War II before settling in eastern San Jose. Having survived the Great Depression as a migrant worker, Chávez founded the United Farm Workers Union, worked for civil, labor, and consumer rights; Latino rights; nonviolence; and environmentalism [3; 5].