This establishment in Lincoln Park is now a bar and grill, but at one time it operated as a speakeasy. The building is now occupied by John Barleycorn's and has stood in Lincoln Park since 1890. It began as a pub opened by an Irish immigrant moonlighting as a Chicago police officer. During Prohibition, the pub was boarded up on the exterior to appear vacant to the authorities. However there was a full-blown speakeasy operating on the inside. What is now the back room at John Barleycorn's was used to front a Chinese laundry, where bootleggers would roll in laundry carts loaded with booze under stacks of dirty clothes. The liquor was then transported to the basement where it was stored, and drinks were served by bringing bottles up in a small elevator. Costumers entered through the back laundry entrance, since the front of the building was boarded up. 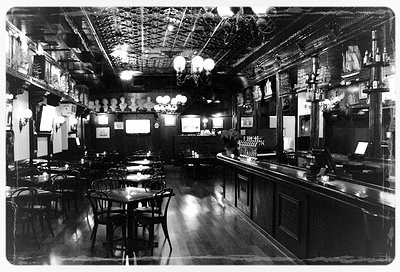 Later, during the Depression, John Dillinger is said to have been a frequent costumer. John Dillinger was an American bank robber during the Great Depression. His gang and himself robbed two dozen banks and four police stations. He was also charged with, but never convicted of, the murder of an East Chicago, Indiana police officer. In the early 1930s Dillinger’s crimes stood-out from those of Baby Face Nelson, Pretty Boy Floyd, and Bonnie and Clyde.
Dillinger was on the run for almost a year before becoming wounded, and returning to his father's home to recover. He returned to Chicago in July 1934, and on July 22, the police caught up with him at Biograph Theater. Dillinger began to flea leaving the theater; he pulled a weapon, but was shot three times and killed in the alley next to the Biograph Theater, just a few blocks north. This speakeasy was a common stop for the notorious John Dillinger, where he would often buy a round on the house with his stolen money.
Not much is known of the bar's history following Dillinger's day, but it was purchased in 1965 by a Dutch man who had a passion for handmade model ships and antiques. These ships can still be viewed today in the main room, some of which date back to the 1800s.

Take a step back in time and view Chicago from the eyes of the city's famous Mob bosses such as Al Capone, Dean O'Banion, and John Dillinger. Beginning with two of Chicago's former speakeasies, Simon's Tavern and the Green Door Tavern, the tour continues to such sites as the St. Valentine's Day Massacre, the Green Mill Cocktail Lounge, and the Cook County Jail. The tour ends at the final resting place for many of these organized crime bosses, St. Carmel Catholic Cemetery.