People gathered horses, wagons, and even a pair of bicycles for this 1894 photograph. To the right, several businesses can be seen including Steve Harris' blacksmith and wagon shop which had been in operation since 1878. 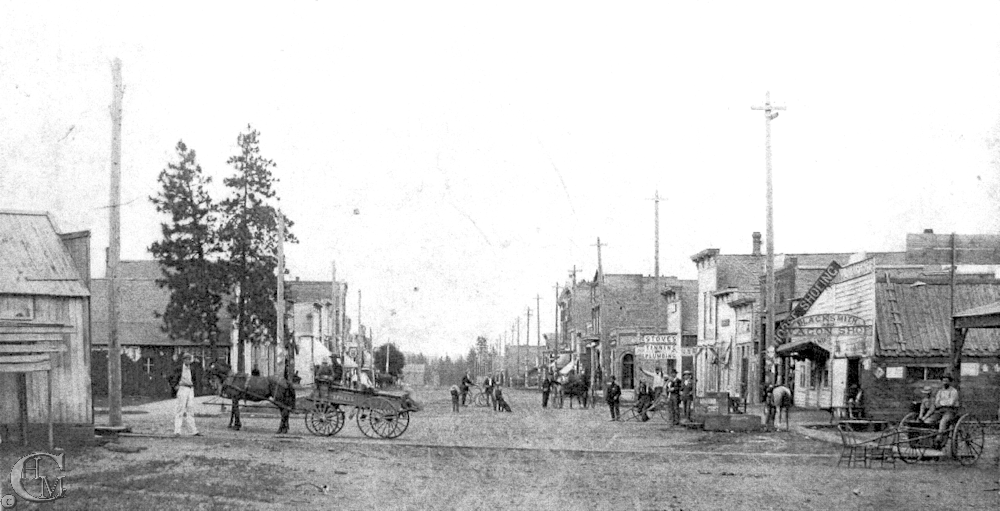 This image give a clearer view of the municipal well near G Street.

People gathered horses, wagons, and even a pair of bicycles for this 1894 photograph. To the right, several businesses can be seen including Steve Harris' blacksmith and wagon shop which had been in operation since 1878, John Garner's secondhand store, a hardware store, J.E. Roos' bakery, and a store advertising stoves, tinning and plumbing.

While it is difficult to see, there is a city well and watering trough on the right side of the street near the power pole. It was one of three municipal wells serving the business district. While a municipal water system had recently been installed that brought water from Fish Lake to a reservoir on the hill near the Normal School, visitors often used the wells on main street both for their animals and themselves. Most homes, too, still used private wells.

The Oregonian's Handbook of the Pacific Northwest said this about our town in 1894:

Cheney contains today a population of about 1,000. Its broad and well improved streets are lined with a substantial class of buildings. The two banks of Cheney rank among the solid financial institutions of the state. The hotel at Cheney would be an ornament to a town of much larger population. The State Normal School, which now occupies a fine building at Cheney is permanently located at this point. Among the industrial plants of Cheney are several wood-working establishments and a flouring mill with a capacity of 80 barrels a day. A large brickyard in the vicinity of the town turns out several hundred thousand brick each year. The enterprise of the citizens of Cheney is shown by the fine water works system here.  Cheney is well lighted by electricity supplied by a complete plant equipped at a cost of $20,000.

The Oregonian's Handbook of the Pacific Northwest 1894
The Cheney Sentinel