There's a historical marker on the road to Mammoth Cave for "Sand Cave," where Floyd Collins -- America's Greatest Cave Explorer -- met his untimely demise in 1925. The Wayfarer, a large house behind the marker, was purchased by Becky and Larry Bull in 1989 to open an upscale (at least for Cave City) gift shop and bed and breakfast. They didn't know a thing about Floyd. Constant questions by visitors to the marker prompted the Bulls to do their research and open a museum.

Floyd's body was displayed in a glass-topped coffin in Crystal Cave for many years. 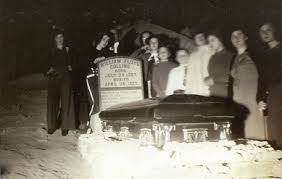 Floyd Collins was a legendary spelunker and Kentucky backwoods boy. He'd discovered nearby Crystal Cave and turned it into a profitable commercial attraction. He was part of the infamous Cave Wars between Mammoth and 17 other hungry cave attractions. In 1925, Floyd was plugging away at his exploration of a wet rathole called Sand Cave, hoping to find major passages, perhaps even a link to the massive Mammoth Cave system. A little rock fell out of the wall and wedged Floyd's foot, 150 feet from the surface.

Floyd had only one light, was ill-clothed, didn't have a protective helmet, and was exploring alone. Don't forget, now -- this is America's Greatest Cave Explorer. Relatives eventually noticed that Floyd was missing, and a quick check of his latest hangout confirmed the worst. The ensuing rescue effort and publicity carnival lasted for 18 days and captured the ghoulish interest of the whole nation, via the relatively new medium of radio.
They tried everything - digging and hacking at the passageway, sinking a new shaft, feeding Floyd to keep up his energy, and sending down reporter Skeets Miller, who chronicled the drama. A passage just above Floyd eventually collapsed, cutting him off for his last few days. As the historical marker matter-of-factly states, his plight "Aroused sympathy of nation." In the end, Floyd died.
Floyd's body was displayed in a glass-topped coffin in Crystal Cave for many years. After some vandalism, in which his body was stolen -- and later found in a nearby field (missing a leg) -- he was placed in a chained casket. You could get a peek on the tour if you gave the guide a tip. The National Park Service eventually absorbed Crystal Cave and closed it to the public. In 1989, the family had him properly buried in Flint Ridge Cemetery.
The museum chronicles the rescue attempt in a series of stuccoed, cave-like alcoves. The final chamber contains a chained coffin . A Floyd Collins ballad, popularized on the then new medium of radio, plays in the background. You can sign the guest register near a replica of his tombstone.
You can visit the real tombstone in a cemetery on the National Park grounds, next to the old Mammoth Cave Baptist Church. A little further up the road, you can park and walk a mile and a half to the old Crystal Cave ticket booth and entrance. Proceed at your own risk; though there are no warning signs, and the NP folks aren't encouraging visits. The ghost of Floyd may still be out looking for his leg. 1http://www.roadsideamerica.com/story/2105