This historical marker was dedicated on July 11, 2004 to commemorate the most famous duel in American history, which occurred at this site exactly two centuries prior. The combatants, Aaron Burr and Alexander Hamilton had been engaged in a rhetorical battle for several years. Their disagreements culminated in a meeting at this location, known as the Weehawken Dueling Grounds, in what would become the most famous duel in American history. The duel ended in Alexander Hamilton's death, and further damage to Aaron Burr's reputation and career. In his later years, Burr worked as an attorney.

This historical marker was dedicated exactly 200 years after the famous duel. 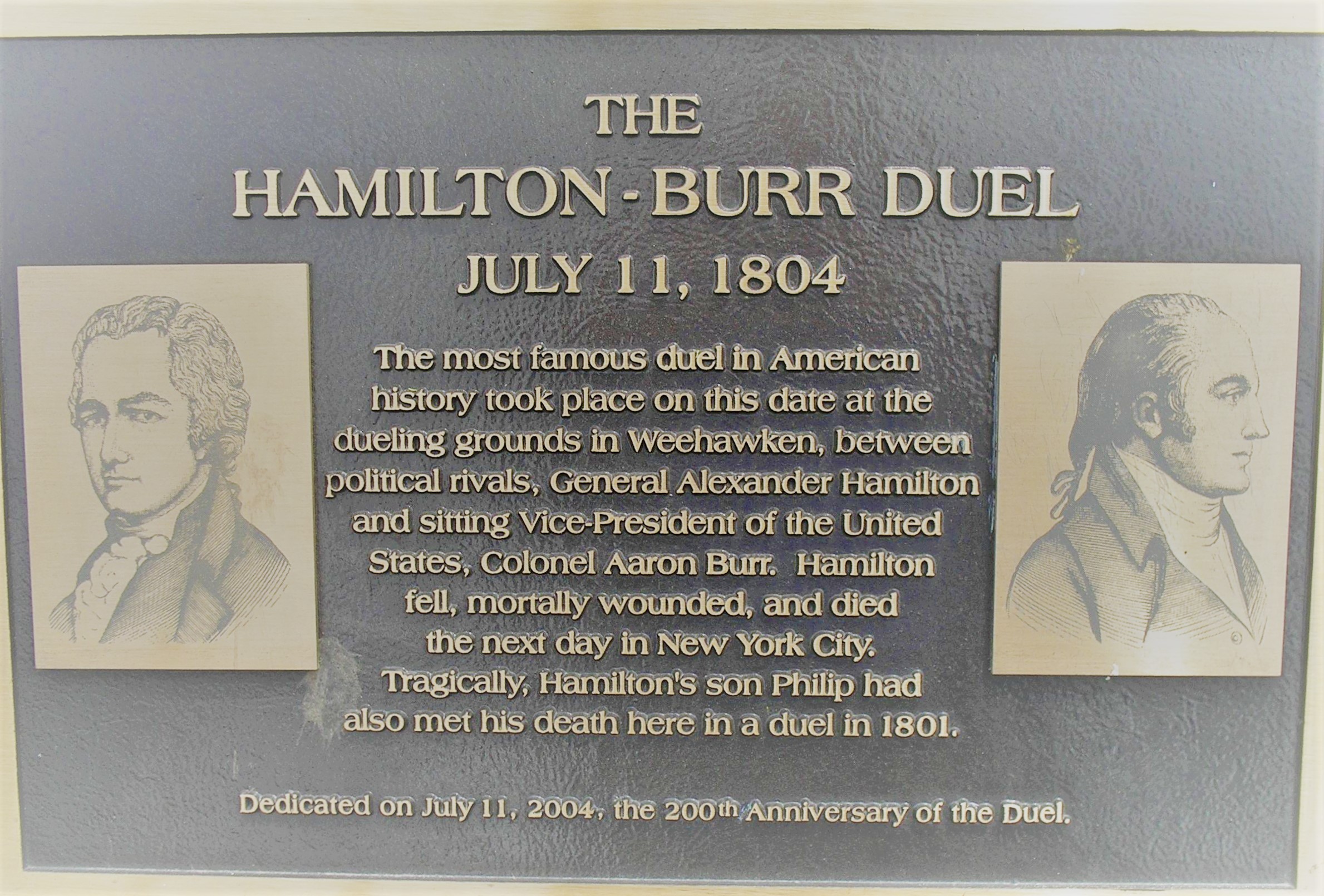 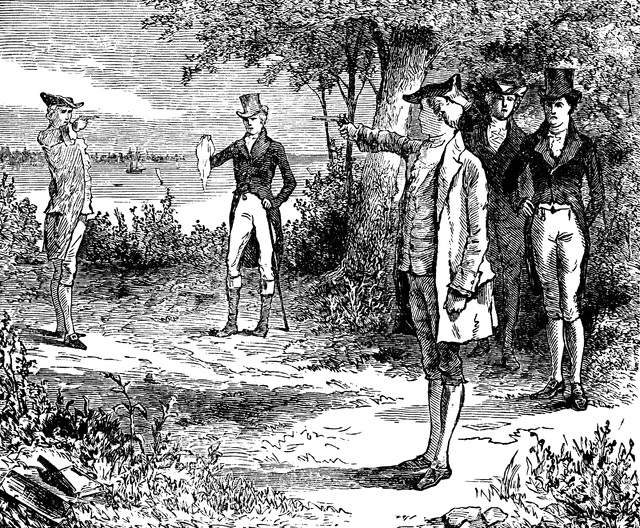 Close-up photograph of the inscription on the rock. 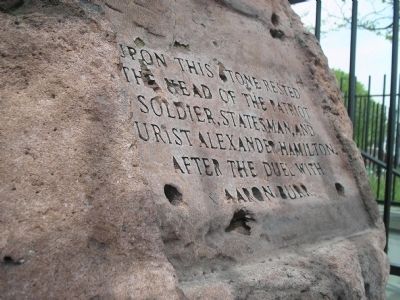 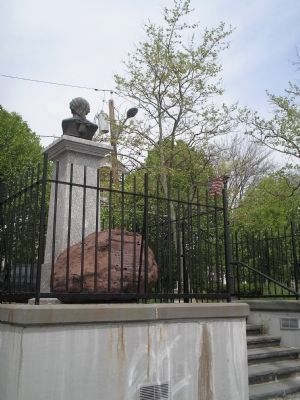 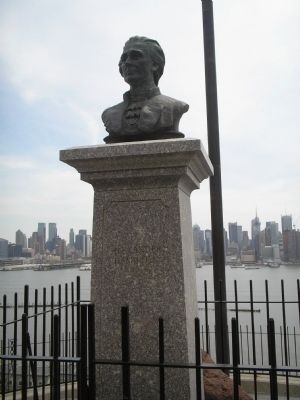 On June 18, 1804, Burr wrote a letter to Hamilton asking about the assertions published by a Charles Cooper. Burr wrote, "You must perceive, Sir, the necessity of a prompt and unqualified acknowledgement or denial of the use of any expression which would warrant the assertions of Dr. Cooper." On July 10, 1804, Hamilton issued a statement that stated that Hamilton made severe statements about Burr's political principles and character. Hamilton was making it sound as if Burr had left him no choice but to duel, despite the fact that Hamilton had been assaulting Burr's character since 1792.

Duels were illegal in New Jersey, but the two duelers met at the Weehawken dueling area anyway on July 11, 1804. Weehawken, only accessible via the water, was a popular dueling place on the Hudson with more than 70 duels having been fought there that resulted in 35 deaths. In fact, both Hamilton and Burr had been there for previous duels. Hamilton was more experienced at dueling and had been in twelve duels previously. Burr was a duelist only once before. Dueling a had a protocol that each dueler have a second hand that helped with various activities regarding the duel. Aaron Burr picked William Van Ness, and Alexander Hamilton selected Nathaniel Pendleton to act as their respective seconds. Hamilton provided the pistols, which were a pair of .54 caliber dueling pistols. The combatants were a mere 30 apart. Lots had been cast to determine who got to choose their location and which second was allowed to give the command to start the duel. Hamilton won both lots. Finally, Pendleton gave the command to fire. It is believed that Hamilton fired first and missed. Burr fired the second shot and hit Hamilton's liver before lodging into his spine. Hamilton died from his injuries the next day.

The newspapers had much to say about Hamilton's death. "What shall we do; our chief is slain?" asked The Sprig of Liberty. An article from the New York Evening Post reprinted by the Sprig of Liberty said, "The public mind being extremely agitated by the melancholy fate of that great man, Alexander Hamilton." The Sprig of Liberty also reprinted the following from the Philadelphia Gazette: "The greatest man in America has this morning fallen in a duel! General Hamilton!-Yes-Hamilton! The pride of every true American is by this time no more." We find from the New York papers from july 30th to August 8th that the "Coroner's Inquest upon the body of the late General Hamilton have brought in the verdict of murder against Aaron Burr." The American papers continued to be filled with writings of this unfortunate event. Several books gave former President John Adams credit for suggesting that Burr had repaid Hamilton for "fifteen years of slander." This goes to show the political culture at the time was vicious and could lead to a fatal finality. Thus, the events that transpired at Weehawken caused many issues for Burr.

The death of Alexander Hamilton marked the death of Aaron Burr's political career. His political career was already in a state of despair, and it died a public death. The Federalist, even ones that hadn't previously been harsh to Burr, was very angry over Hamilton's death. The Courier of London, England, printed a voluminous article that handled several aspects. The Courier gave a detailed account of the duel and all of the particulars that it involved. They also gave illumination to the last will of testament of Alexander Hamilton. Hamilton wrote a letter that explained his reason for dueling with Burr, which was published on August 16, 1804. The Republicans saw the chance to end the last thing that had made a credible charge at the Jeffersonian dynasty. Burr was treated in the press as a murderer despite the duel being a mutual choice by both parties and had been fought with a fair spirit. Supporters of Jefferson, Clinton, and Hamilton made a united effort previously against Burr and had many newspapers at their disposal. Jefferson had allowed the Sedition Act to lapse, so that gave him a favorable light to many editors. During this era there were around twenty daily newspapers so the newspaper was certainly a viable tool to get a message presented to the public.

"The Sprig of Liberty." The Philadelphia Gazette April 21st 1804.