During World War II, the Glenn L. Martin Company's Bellevue, Nebraska, plant assembled aircraft for the United States' war effort. Located on the Fort Crook military post, the facility was the only building of its kind in Nebraska. The plant turned out over 2,000 B-26 and B-29 aircraft from 1942 to 1945, including the two B-29s used to drop the atomic bombs on Hiroshima and Nagasaki. After the war, the plant was returned to the United States government and used for various functions on the newly christened Offutt Air Force Base. As of 2015, the building is scheduled to be demolished because of its proximity to the base's main runway, which poses a safety hazard.

An overview of the Glenn L. Martin Company's Nebraska facility, which utilized the existing aviation facilities of Offutt Field. Date unknown; presumably during or after World War II. Courtesy of the Library of Congress. 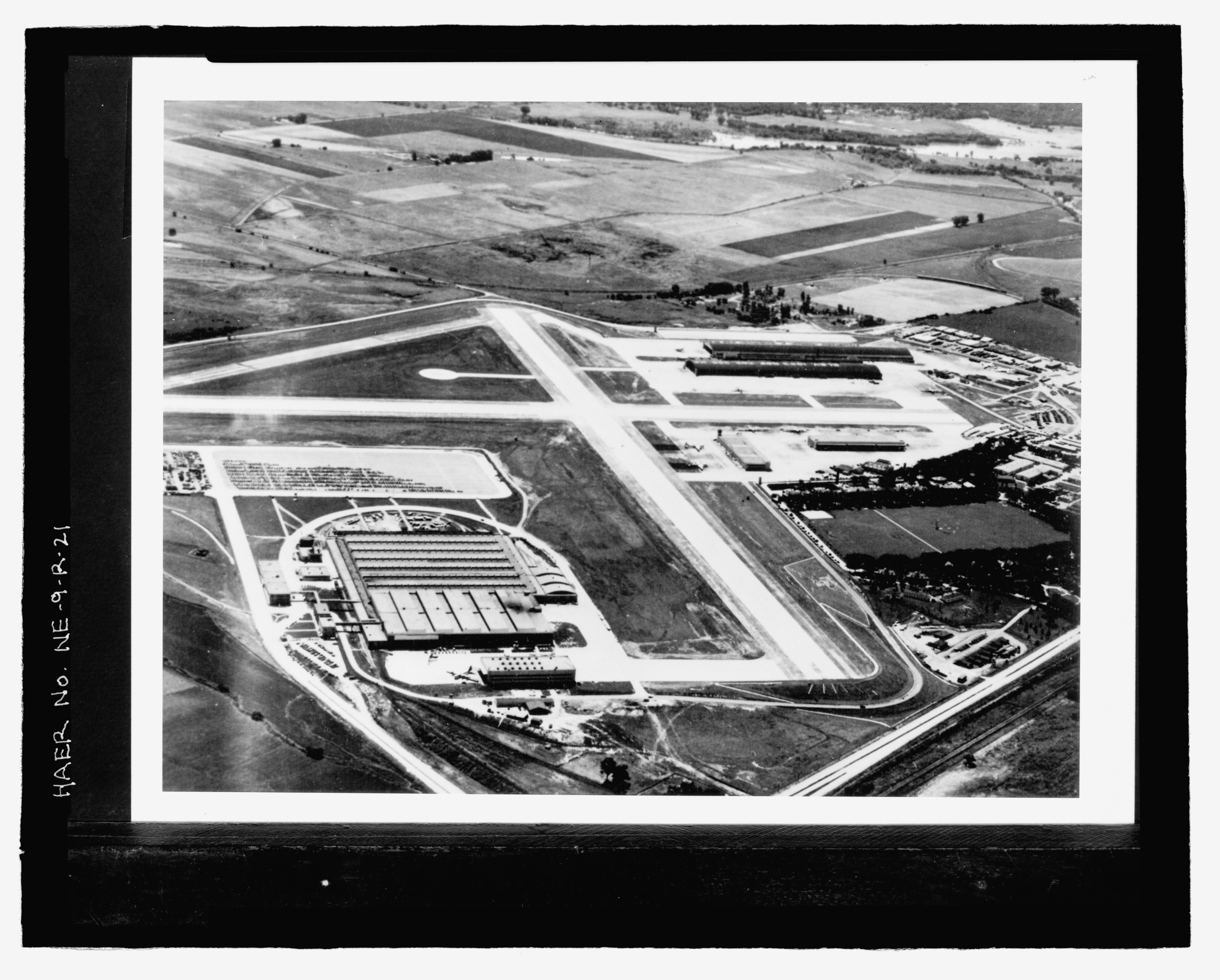 The interior of the factory, date unknown. Courtesy of the Library of Congress. 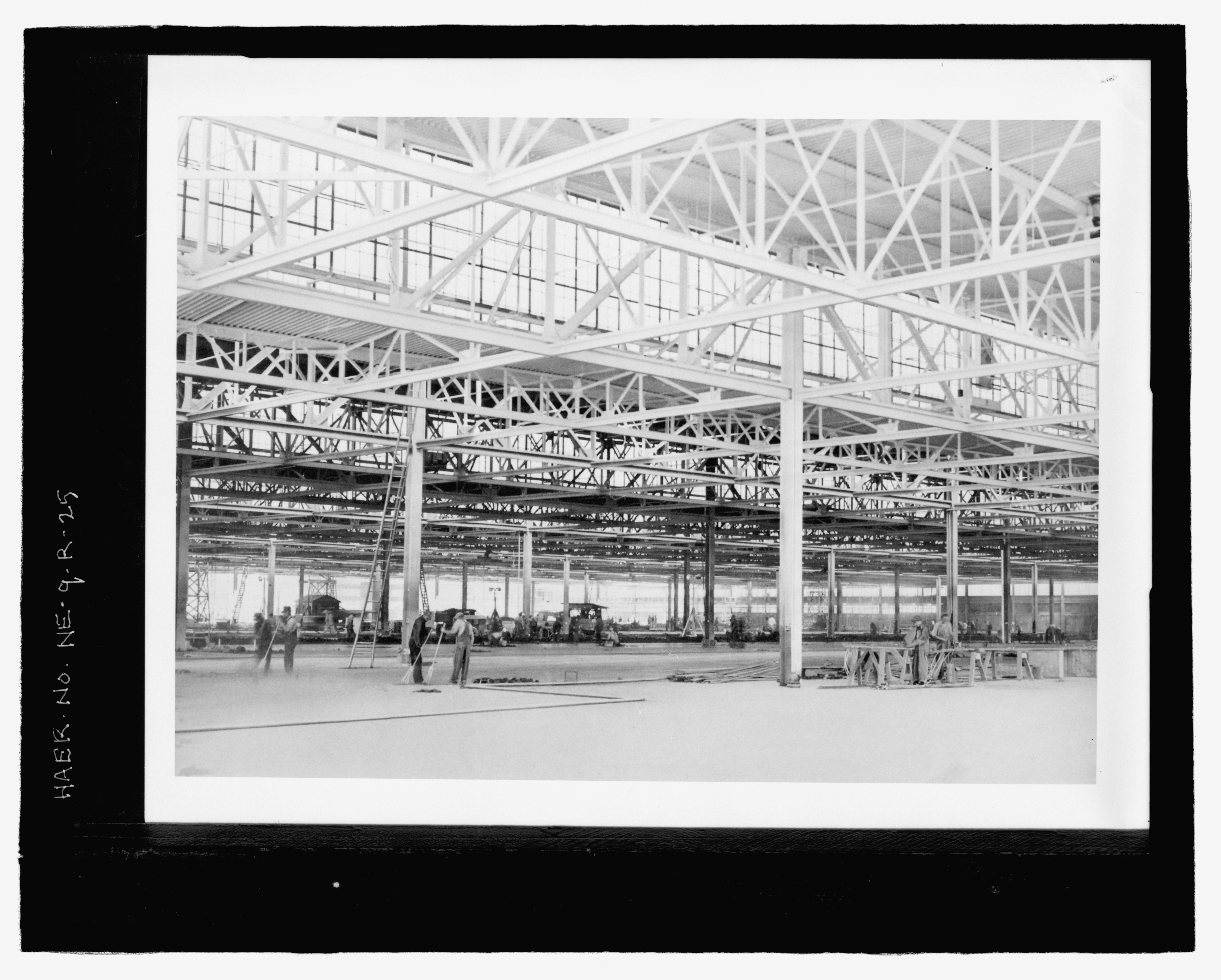 A view of the accident which occurred on September 22, 1943. Courtesy of the Library of Congress. 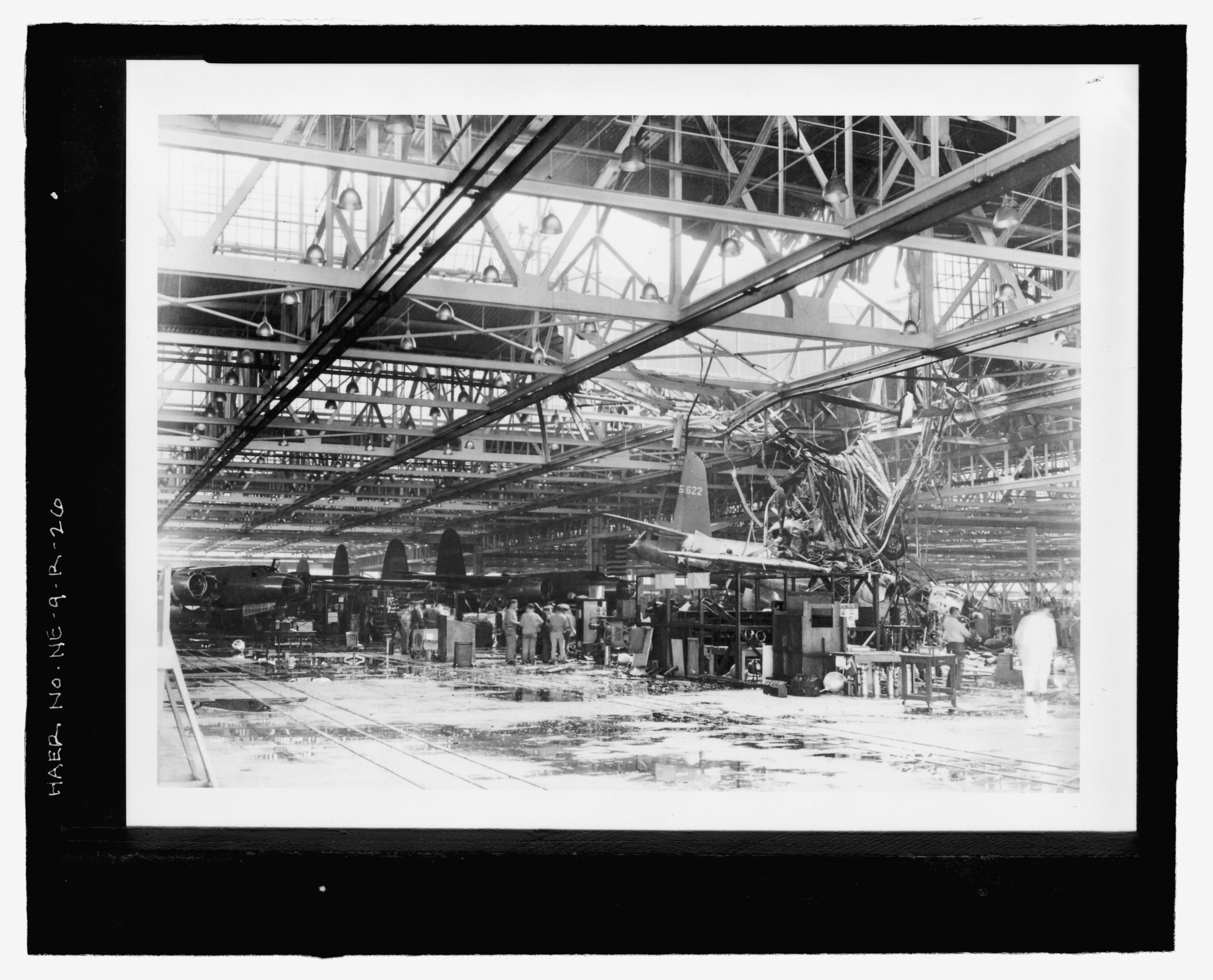 The final B-26 rolls out of the factory with a large crowd in attendance on April 4, 1944. Courtesy of the Library of Congress. 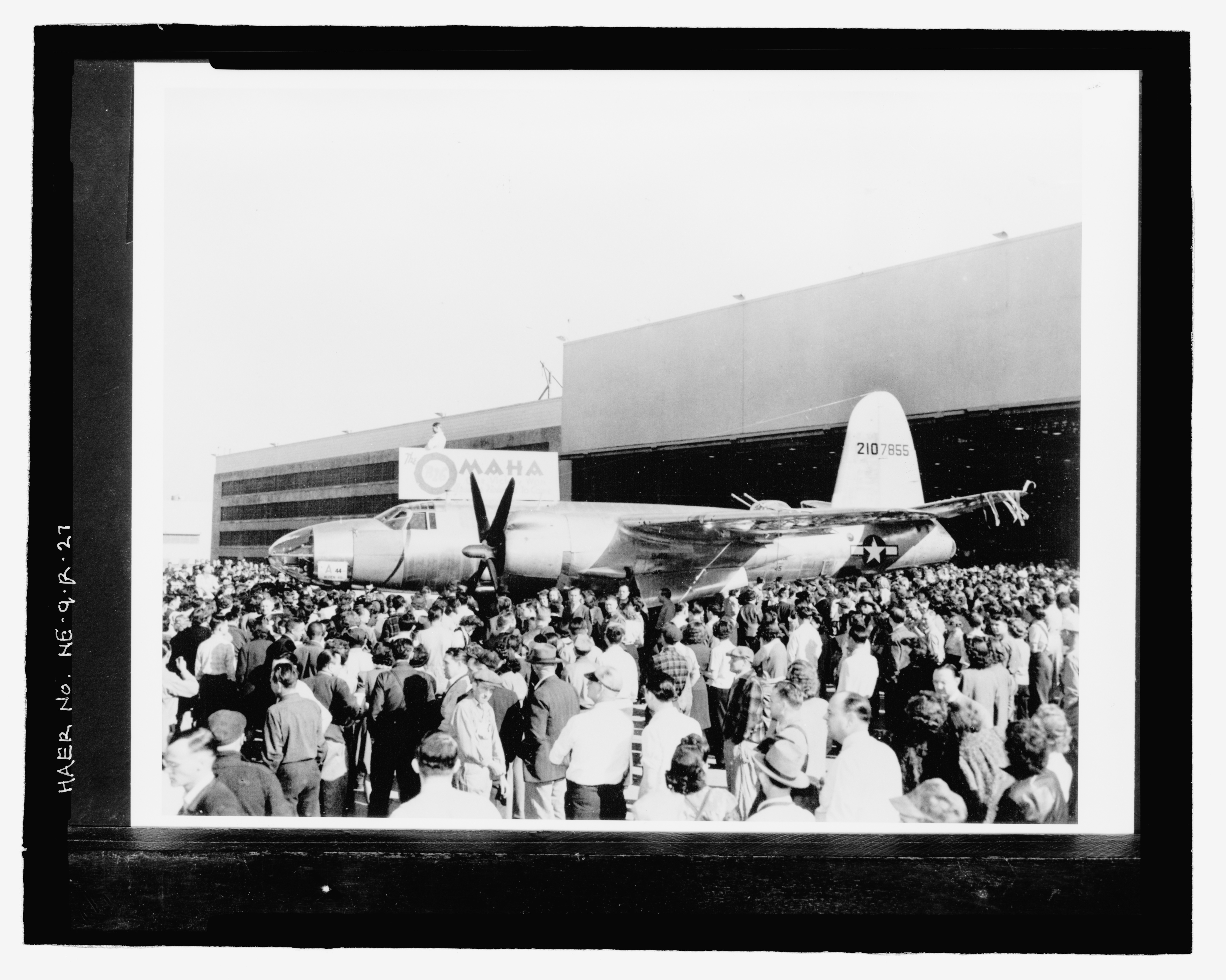 The first combat-worthy B-29 leaves the Martin-Omaha plant on May 24, 1944. Courtesy of the Library of Congress. 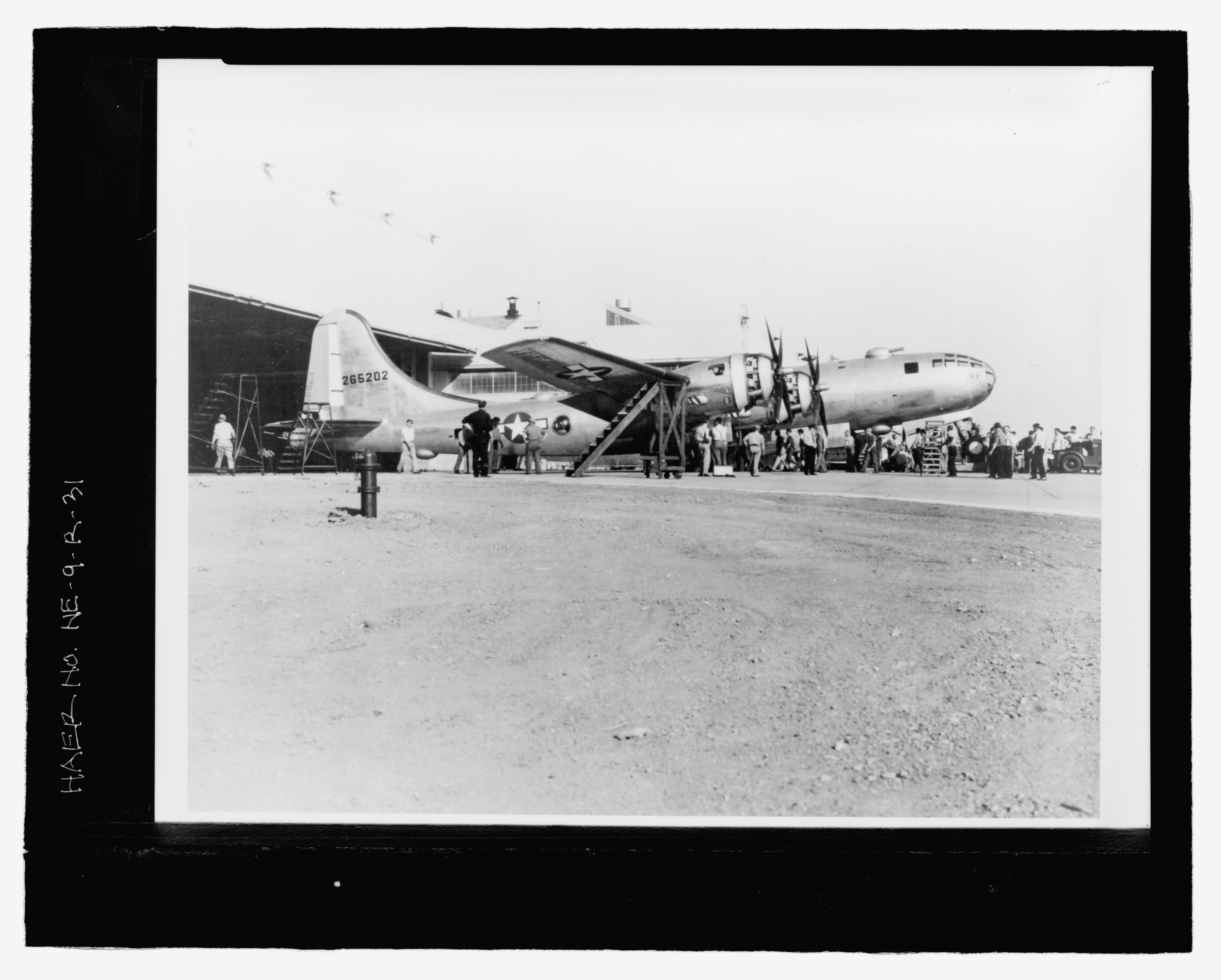 The factory during B-29 production, 1944. Courtesy of the Library of Congress. 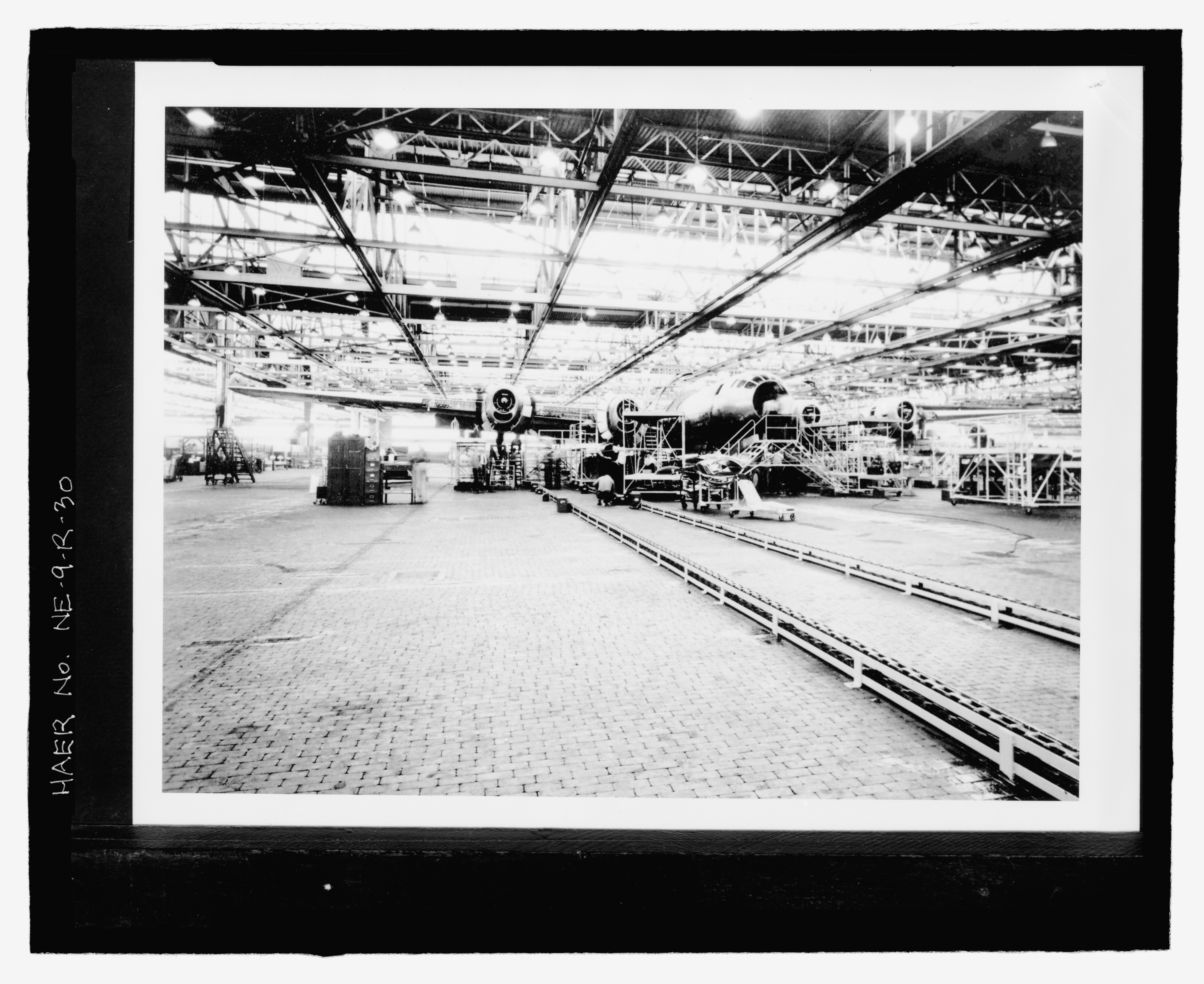 In 1940, the National Defense Advisory Committee (NDAC), headed by business magnate William S. Knudsen, proposed the construction of two aircraft manufacturing plants to provide a cushion should the United States enter World War II. Manufacturing of major aircraft subassemblies such as wings and fuselage sections would be handled by automotive companies such as Hudson and Chrysler. The companies that originally designed the aircraft (and occupied the proposed plants) would receive the subassemblies and create complete aircraft.1

Because of the number of people needed to work at each factory, the War Department and Army Air Corps decided to build four smaller factories instead of two large ones. The War Department decided to build the new factories as far from the coasts as possible to decrease their vulnerability to attack as well as their distance from subcontractors, in areas that could sustain the labor requirements. The factories also needed to have large enough dimensions to accommodate the biggest proposed military aircraft of the time. Omaha (more precisely, Bellevue) was chosen as one of the four cities where factories would be located. The other three factories were located in;

1. Kansas City, Kansas. Operated by North American Aviation, the factory was used for the manufacture of the B-25 Mitchell medium bomber.2

2. Oklahoma City, Oklahoma. Operated by the Douglas Aircraft Company, the factory was used for the manufacture of the the C-47 Skytrain transport aircraft.

3. Fort Worth, Texas. Operated by the Consolidated Aircraft Corporation, the factory was used for the manufacture of the B-24 Liberator heavy bomber.3

As facilitating the construction of the factories was the responsibility of the aircraft manufacturers, the Glenn L. Martin Company began negotiations with local construction firms in February 1941. It was eventually agreed that famed industrial architect Albert Kahn would design the factory building, while several other companies, most of them local, would be involved in the acquisition of materials and construction of the nine-building complex;

Construction on a 641.76-acre plot of land began in spring 1941.4 A large hill was leveled by April 17, and the first structural steel was erected on June 18, 1941. The letter of intent previously signed by Glenn L. Martin on March 3, 1941, the day of the plant's groundbreaking, for the production of 1,200 B-26C medium bombers became an official contract on June 27, 1941. The "C" variant of the B-26 was so designated to distinguish it from the B-26B (to which it was otherwise identical) which was produced at Martin's other factory in Middle River, Maryland, outside of Baltimore.5 Martin planned to have the plant completed by November 1941, with production beginning in January 1942. Construction of the plant, minus interior fittings, was essentially completed by the middle of November, and the company was given permission to occupy the plant on December 10, 1941. After the death of Albert Kahn in 1942, the Latenser and Sons Company of Omaha was hired as architect.

Because of lack of machine tools owing to the Army's rather bureaucratic acquisition process (requests for equipment were submitted to Wright Field, Ohio, where they were evaluated on a priority system) the first complete B-26C was not accepted until August 1942. In the meantime, the plant fabricated what it could with the tools it had on hand, and was also used as a modification facility, applying the latest tweaks (or, what it could apply depending upon what resources it had) to B-25 and B-26 aircraft flown in from other locations. Production was slow for most of 1942 (3 aircraft in August, 7 in September, and 15 in October) but picked up in 1943 (90 aircraft in April, 125 in June, followed by an all-time high of 145 accepted in August).6 During the production of the B-26C, on July 16, 1943, the Glenn L. Martin Company accepted a contract for the production of the B-29 Superfortress heavy bomber. Construction was to begin once the plant had completed its B-26 contract and been properly modified.

On September 22, 1943, a tragic accident occurred at the factory. A B-25 which had been flown to Offutt Field from Kansas City for modification crashed through the roof of the assembly line during a test flight, landing directly on top of a B-26. As the line was thankfully empty, the only casualties were aboard the B-25; three of the four crew were killed. Five B-29 prototypes were completed in late 1943 as B-26 production wound down; a total of 1,585 B-26Cs, including 200 unarmed trainer models designated AT-23B, had been built. The first combat-worthy B-29 rolled out of the factory on May 24, 1944. Unlike other aircraft models such as the B-24 and B-26, lettered variants of the B-29 were not pre-designated to be built at specific factories in the production program. Instead, the two-letter manufacturer's code which followed the variant letter (if applicable) and the production block number was used to differentiate B-29s built at each factory. B-29s built by Martin-Omaha were designated B-29-##-MO, while B-29s built at the Boeing Company's Wichita, Kansas factory were designated B-29-##-BW. B-29s built by the Bell Aircraft Corporation in Atlanta, Georgia, were formally known as B-29-##-BA.7

In late 1943 and early 1944, the U.S. Army Air Forces' Silverplate program performed feasibility testing and selected certain partially-completed B-29 aircraft for special internal modifications to be able to carry and drop atomic weapons. 46 (65 if counting 19 more delivered immediately after World War II) B-29s were eventually converted. Among them were the Enola Gay and Bockscar, both Martin-Omaha built aircraft, and the ones used to drop the atomic bombs on Hiroshima and Nagasaki, respectively.8 Both aircraft were preserved because their historical significance, and are now on display. B-29 production at Martin-Omaha ended with World War II in September 1945, with 536 built.9 The last workers left the plant on April 1, 1946.10

During World War II, the plant employed a peak of 14,572 people, forty percent of whom were women. It is impressive to note that the vast majority of the workers had no previous experience working with heavy machinery, and were trained on-site. Of thirty excellence awards given to aircraft factories by the War Production Board, the Martin facility won nine of them, in addition to an Army-Navy "E" Award for operating on-schedule for a period of one year.11

After the end of World War II and an uncertain future for the plant, it was repurposed as a storage facility for machine tools. Beginning in 1959, it was used to manufacture guided missiles. In 1965, these facilities were decommissioned and the building itself used to house various institutions at Offutt Air Force Base, such as maintenance facilities and laboratories. In 2015, the building was scheduled to be demolished because of its proximity to the base's main runway, which poses a safety hazard.12 As of early 2017, preparations for demolition have not yet commenced.