Fly Landing of the Sistersville Ferry

Established in 1815, the Sistersville Ferry Company has been in operation for around 200 years and is now one of only four remaining ferry services in operation along the Ohio River. The location was the site of George Washington’s encampment on his October 1770 journey along the Kanawha and Ohio Rivers, and has a history of several different types ferries used throughout the company’s history, except for a push-pull barge, due to the water’s depth. A historical marker was erected in the location in 2003, and ferry rides can still be taken today.

A ferry boat crossing the river 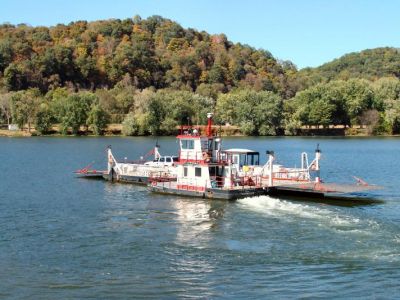 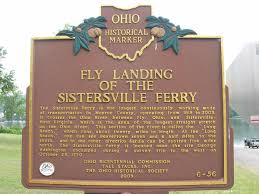 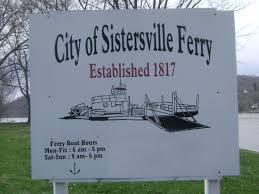 The Sistersville Ferry at Fly Landing was the longest continuously working mode of transportation in Monroe County, Ohio during its time of operation. On January 28, 1818, the General Assembly of Virginia passed an act that granted a ferry service crossing of the Ohio River from Fly, Ohio to Sistersville, Virginia (now West Virginia) to John McCoy. The state of Virginia set the fares to six pence for man or horse to cross the river using the ferry service, a considerably small fee for the length of travel. The section of river is referred to as “Long Reach,” because its 20-mile length is the longest straight stretch of the Ohio River. From Fly Landing, both Beavertown and Sardis could be seen.

The type of ferry used at the time was likely a two-horse powered treadmill ferry because the river was too deep for a man to operate a push-pull barge. Although steam-powered ferryboats were available in the 1840s, the Sistersville Ferry used horsepower until the 1880s. It was not until 1886 that the 1884-built steam-powered Orion was purchased, followed by the W.C. Pusey in 1889.

In 1894, Frank D., A.S. McCoy, and Elizabeth W. Talbott, descendants of John McCoy, bought the ferry company from the other remaining McCoy family members, establishing the Sistersville Ferry Company. In 1907, Orion was converted into the Daniel, but was sold 10 years later in 1917 to make room for a new type of ferry. Built in Clarington, Ohio, their gasoline-powered ferryboats soon became popularized. The stern-wheel Dora T. worked from 1917-1925, and the Kiwanis followed until 1956. In 1920, the company began issuing shares.

Stockholder Everett Tuel bought shares owned by Elizabeth Talbott's descendants, enabling him to gain control of the company, in 1937, while a balance of the shares remained within the McCoy family. Tuel went on to operate the Sistersville Ferry Company as the Tuel Fleet. The following year, he purchased the company’s first diesel-powered ferries, Elinor D. and then in 1939 John F. III, which worked until 1955. At that point, he sold his part of the company to Joe Witten, who had Yates Marine Construction Co. in Wheeling, West Virginia build the diesel-powered ferry-towboat Rides and bought the Sham ferryboat three years later. He then went on to purchase the rest of the Sistersville Ferry business from the McCoys in 1960. Up until 1960, the McCoys had owned or been involved with the Sistersville Ferry for over 140 years.

There are now only four operating ferries along the Ohio River, with the Sistersville Ferry being the only service along the stretch that shares its border with West Virginia. The site at Fly Landing is also the location of George Washington’s encampment on October 25, 1770, when he journeyed west to locate bounty lands on the Kanawha and Ohio Rivers for soldiers of the Virginia Regiment. In 2003, a historical marker was erected by the Ohio Bicentennial Commission, Tall Stacks, Inc., and the Ohio Historical Society. A nearby marker can also be found regarding Washington’s journey at the location.