Located just to the west of Gilroy, California, is a row of approximately 115 deodar cedar trees along a 1.39 mile stretch of state highway 152 that were planted by the local community in 1930 and 1931. The trees were planted as part of the state’s fledgling highway beautification program in conjunction with Arbor Day along the recently (1928) completed Hecker Pass Highway. Numerous stands of deodar cedars were planted along California roads during the 1930s, but a row of original trees along Highway 152 is all that remains due to road widening and rerouting. In 2007, this stretch of Highway 152, known as "Tree Row," was added to the National Register of Historic Places. Tree Row is significant to the social history of tree planting, urban beautification, and observation of Arbor Day.

A few of the majestic deodar cedars that comprise Tree Row along Highway 152. 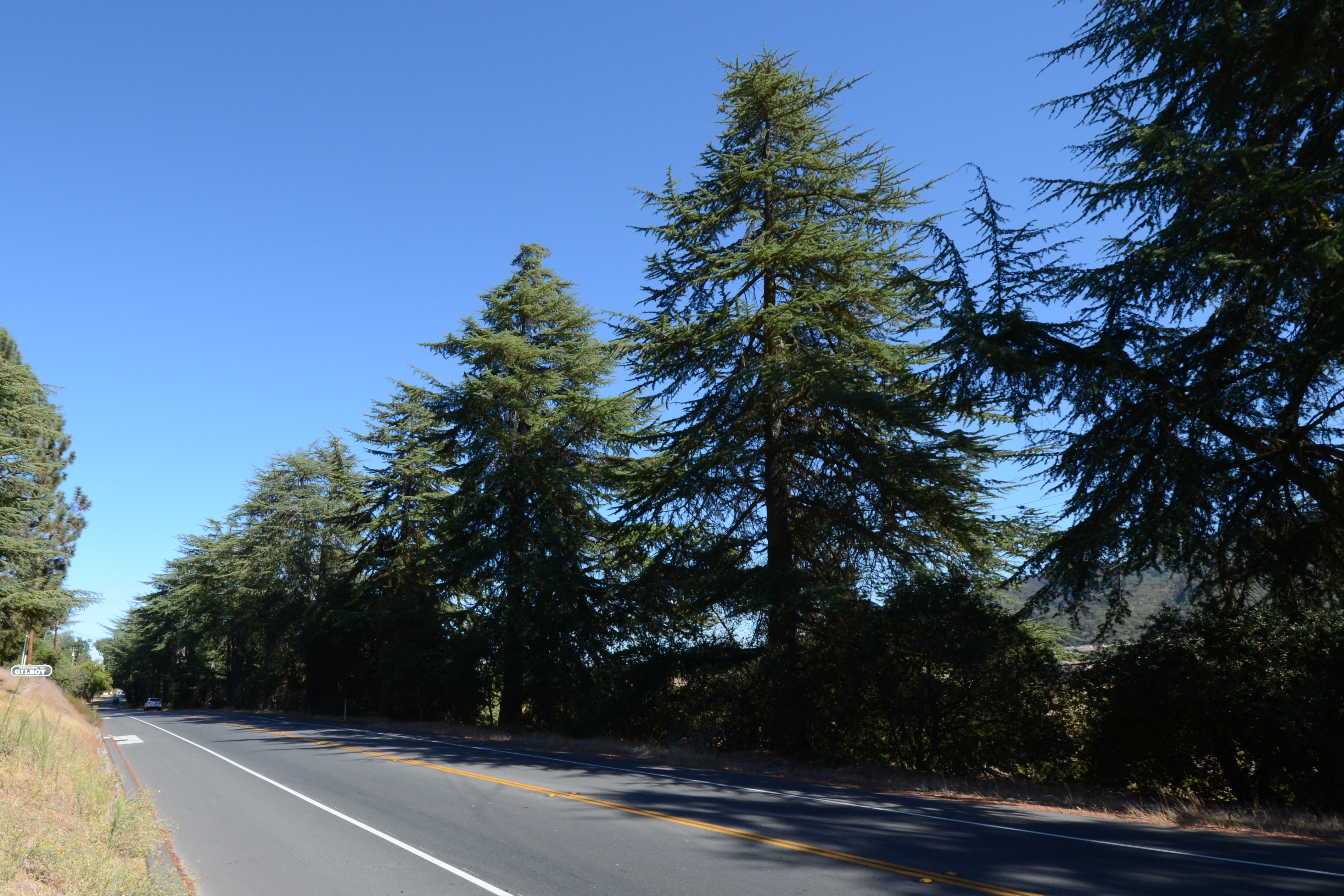 A map of Highway 152 that runs west from Chowchilla to Watsonville. 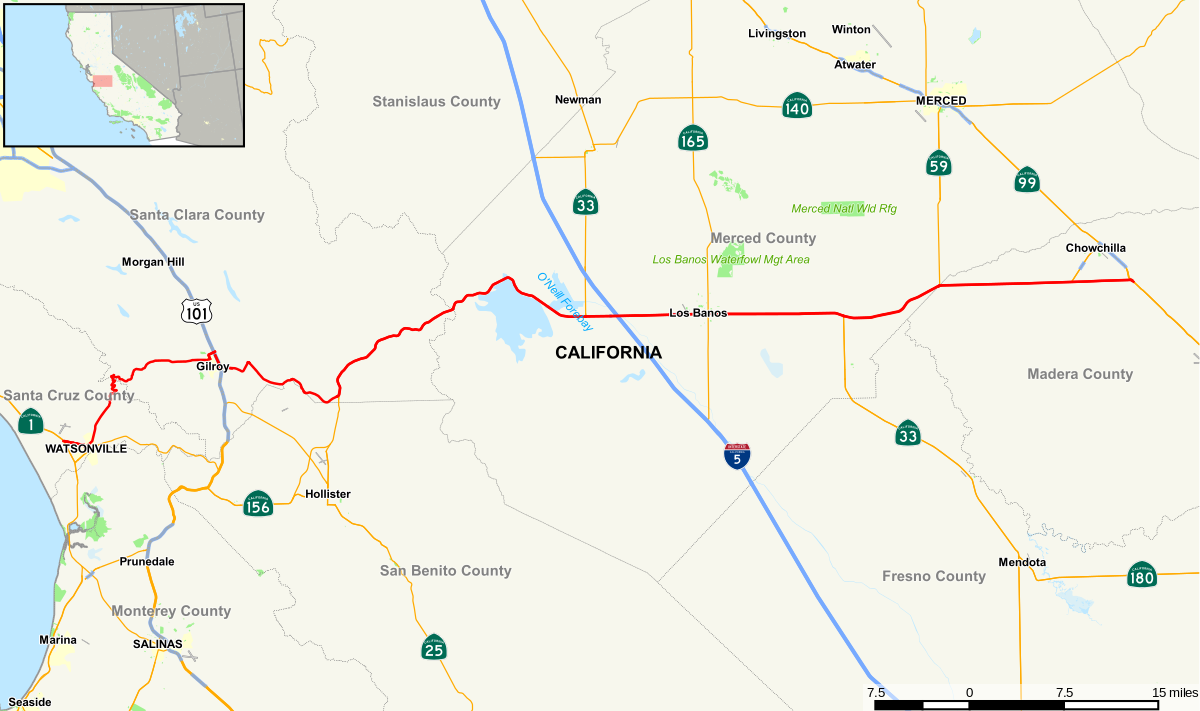 It's easy to see from this photo why the deodar cedar is referred to as a "living Christmas tree." 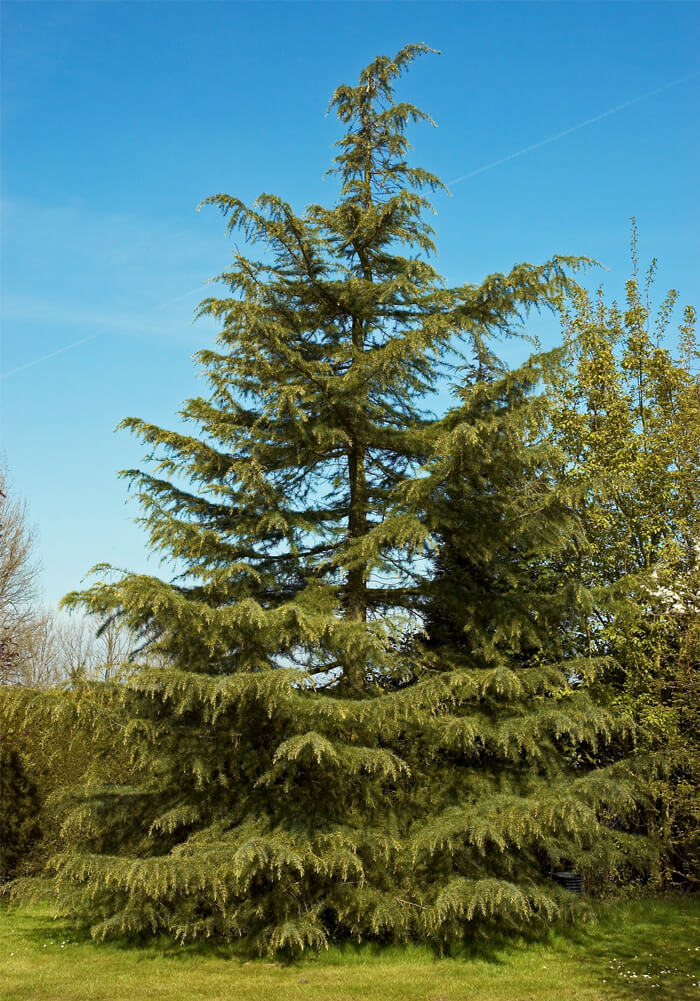 A photo of historic Gilroy, California. 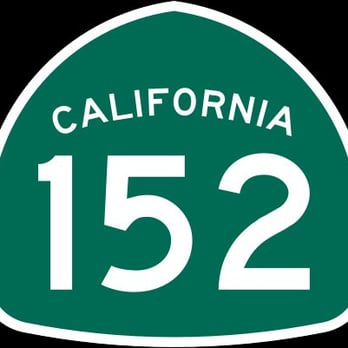 What would become Highway 152 began as a popular route among those heading west in search of gold in the mid-late 19th century.  It is now a major east-west route that runs from Chowchilla in the east to Watsonville in the west, passing through Los Banos and along the San Luis Reservoir on its way to Gilroy.  It then plunges down to Watsonville near the coast.  As the automobile became the pre-eminent mode of transportation in the country, improvements and connections were added to the road and the state’s highway beautification program soon followed.

The town of Gilroy, which was incorporated in 1870, had already planted numerous deodar cedars and was eager to plant more along its western approach.  The deodar cedar had arrived in the United States from the Himalayas, via Europe, in the early 1800s.  Known as the “living Christmas tree,” the deodar cedar is well adapted to the warm, dry climate of California.  They also grow quickly, their wide canopies provide year-round shade and they require little maintenance.  Since Gilroy was pleased with their previous experiences with the deodar cedar, it only made sense to continue planting them on the outskirts of town, along Highway 152.

On March 7, 1930, (Arbor Day) a parade of local business leaders and more than 600 students escorted two flatbeds loaded with the trees to their destination just west of town.  The trees were provided by the Gilroy Elks and Ladies Auxiliary Groups and the community event was organized by the Gilroy Rotarians.  The 75 trees were then planted by a large group of Rotarians, Elks, American Legionnaires, Boy Scouts, Camp Fire Girls, school children and other Gilroyans.  Across the state, over 25,000 trees were planted that day.  The next Arbor Day, the town planted an additional 65 trees along Highway 152.  It would be the last time they did so as the residents, and the country, became increasingly preoccupied with the Great Depression and the coming of World War II.

Today, if you drive west from Gilroy, over 100 of those original deodar cedars still tower 50-feet over your car at regular 20-feet intervals between Santa Teresa Boulevard, past the Gilroy Golf Course and end at the Uvas Creek Bridge.  They are the last remnants of a once thriving number of deodar cedars that were planted in the 1930s along 152 from Santa Cruz to Watsonville which makes them, primarily for that reason, historically significant.