Completed in 1840, the North Carolina State Capitol is the fifth home of the state government. The first headquarters of the colonial government was in Edenton, but when the population shifted southward and westward, New Bern was selected as the headquarters of the colony. The first headquarters was constructed between 1767 and 1771. In 1788, a state convention decided to move the capital to Raleigh and model it after the building that served as the national capital Philadelphia. The original capital in Raleigh burned in 1831 and a statue of George Washington was destroyed beyond repair. The current building was placed upon the site of the burned building and it was completed in 1840. This building held the governor's offices, legislative, and supreme court at its completion. The Supreme Court moved to a separate building in 1888. The legislative moved in 1963 and today the Capitol now holds the governor's office and holds plaques of famous North Carolinians around the rotunda.

This a view of the Capitol from a street corner in downtown Raleigh. 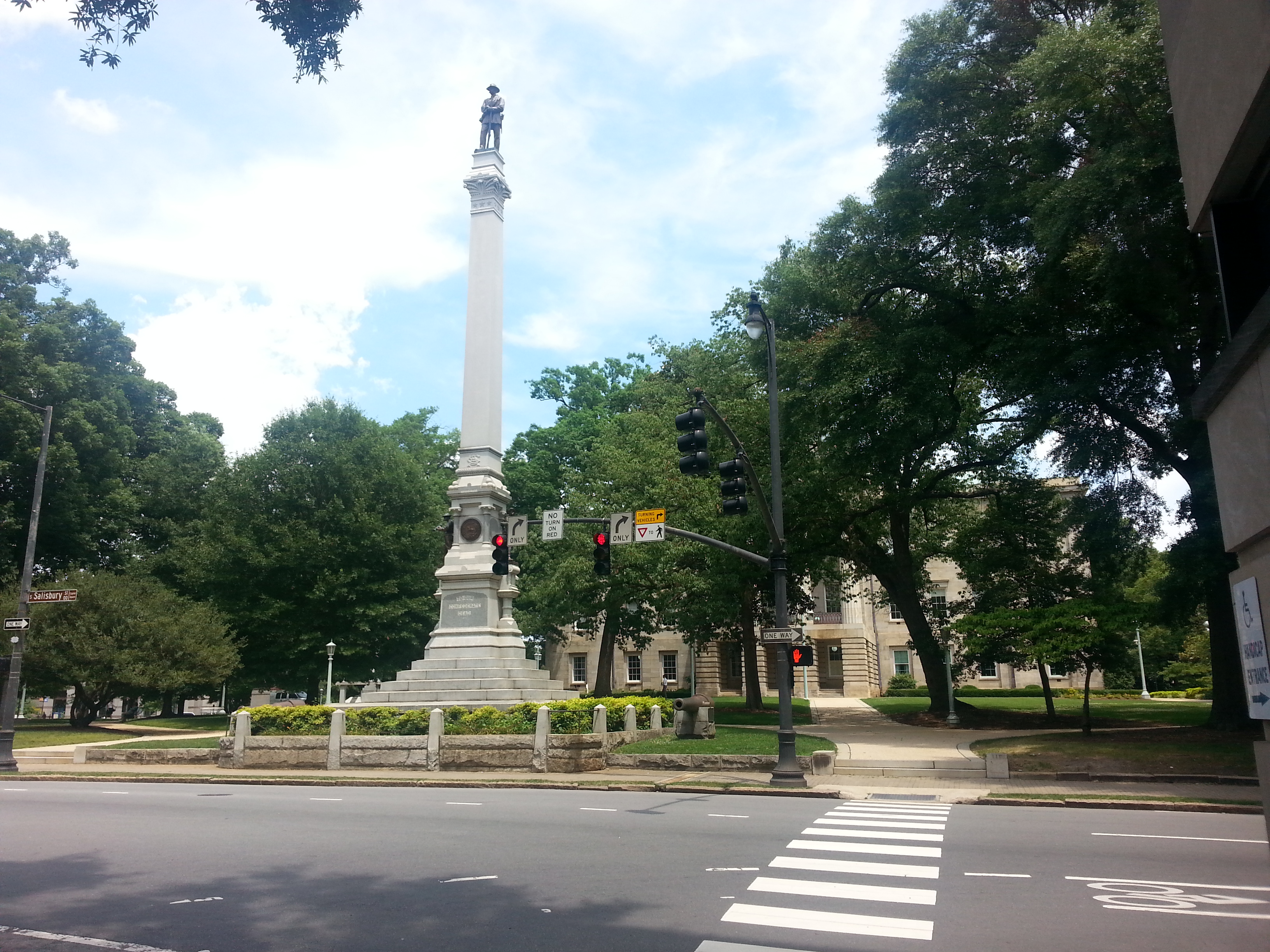 This picture shows the Capitol from the rear of the building. 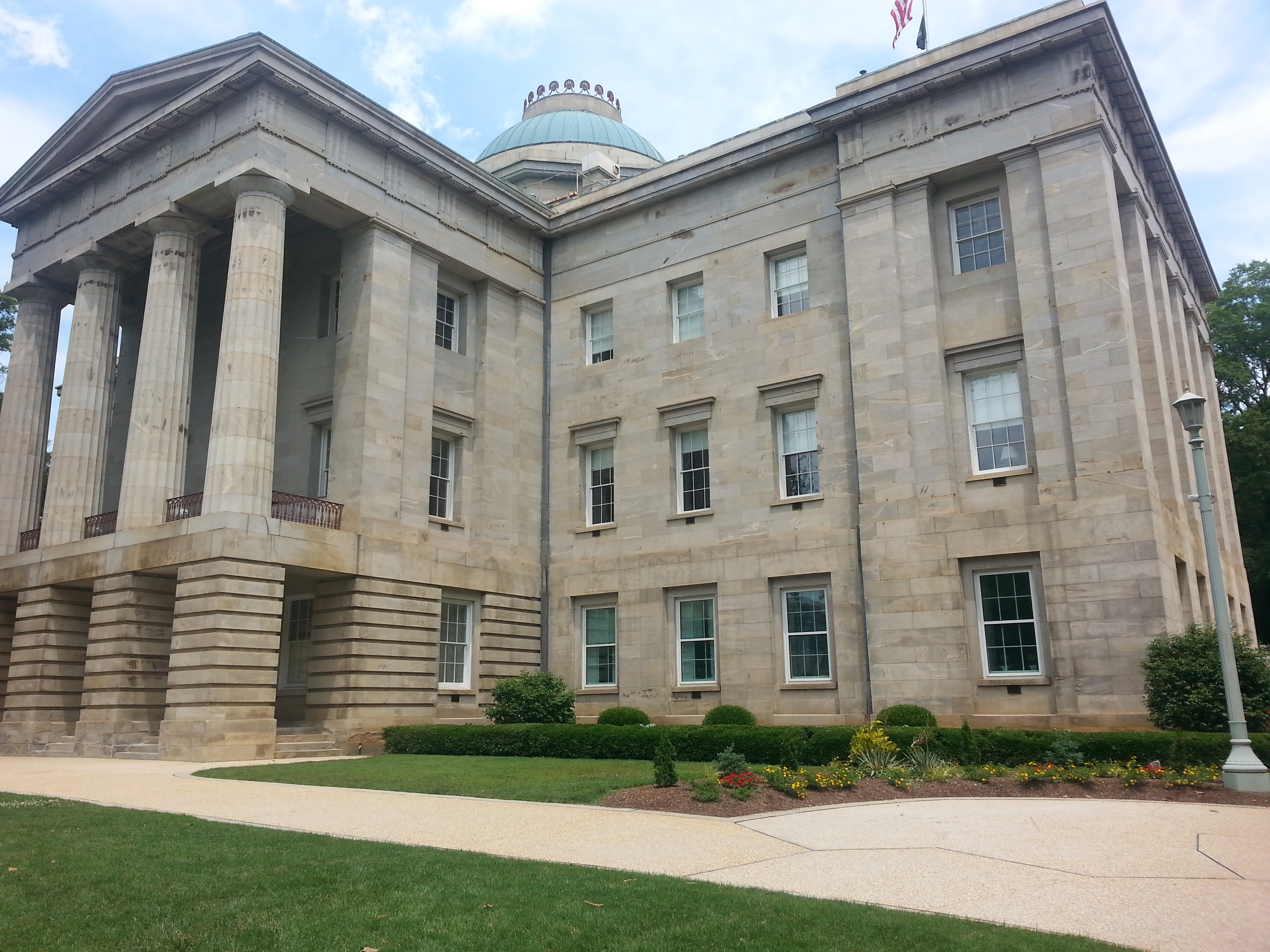 Me (Sarah) in front of the building. 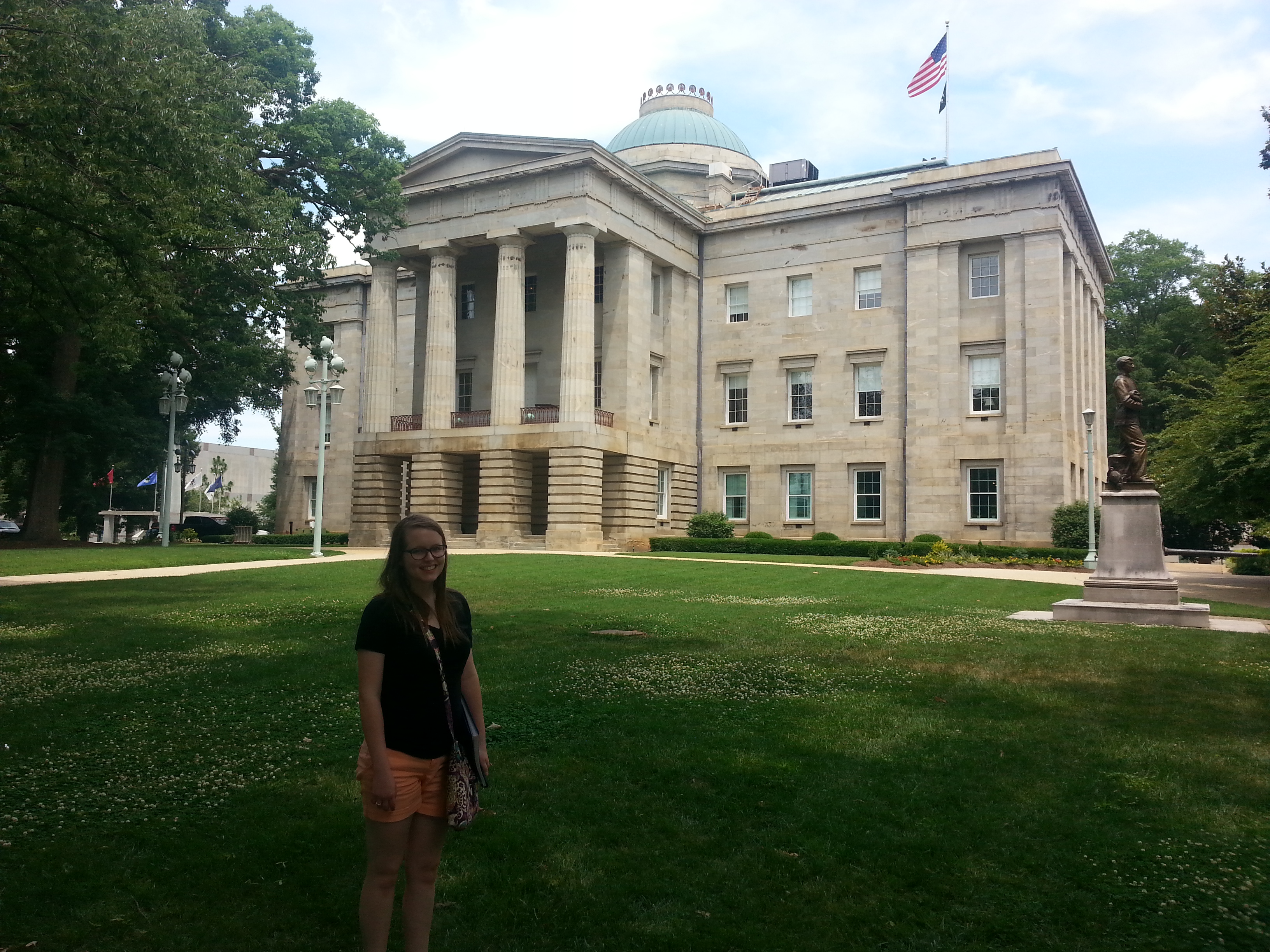 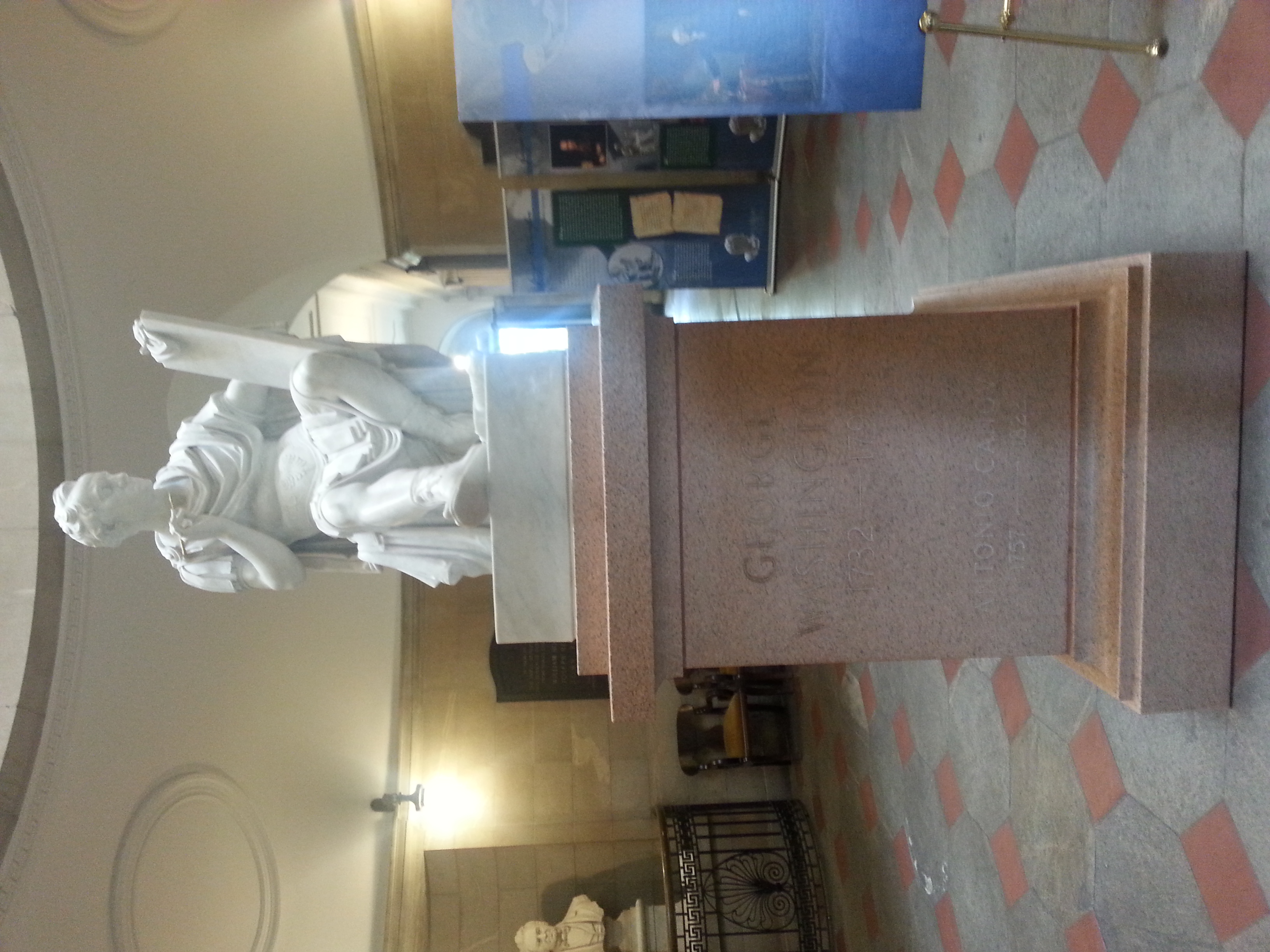 This sign explains why George Washington is featured throughout the Capitol. 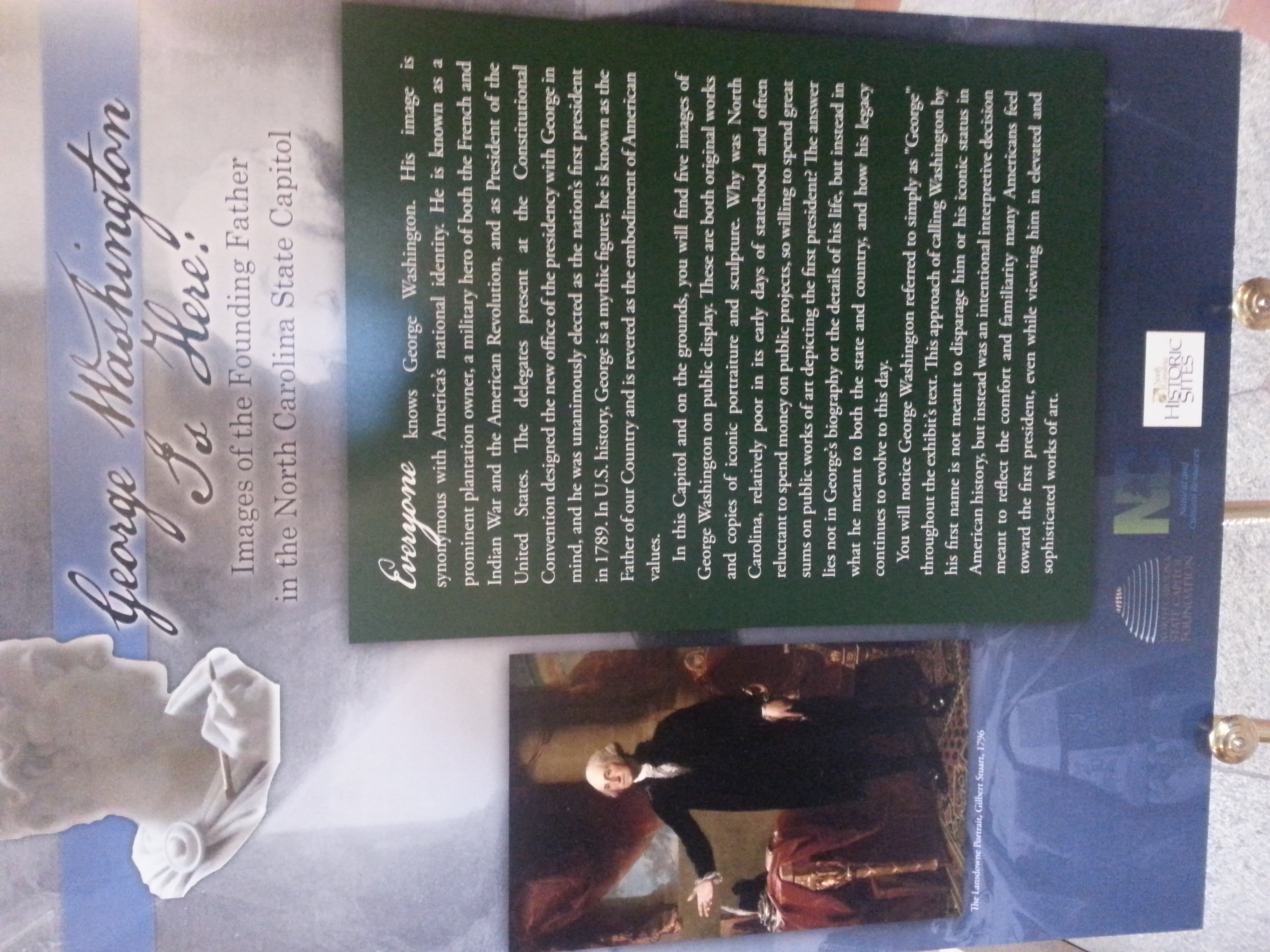 One of the Capitol's most distinctive features: its Rotunda. 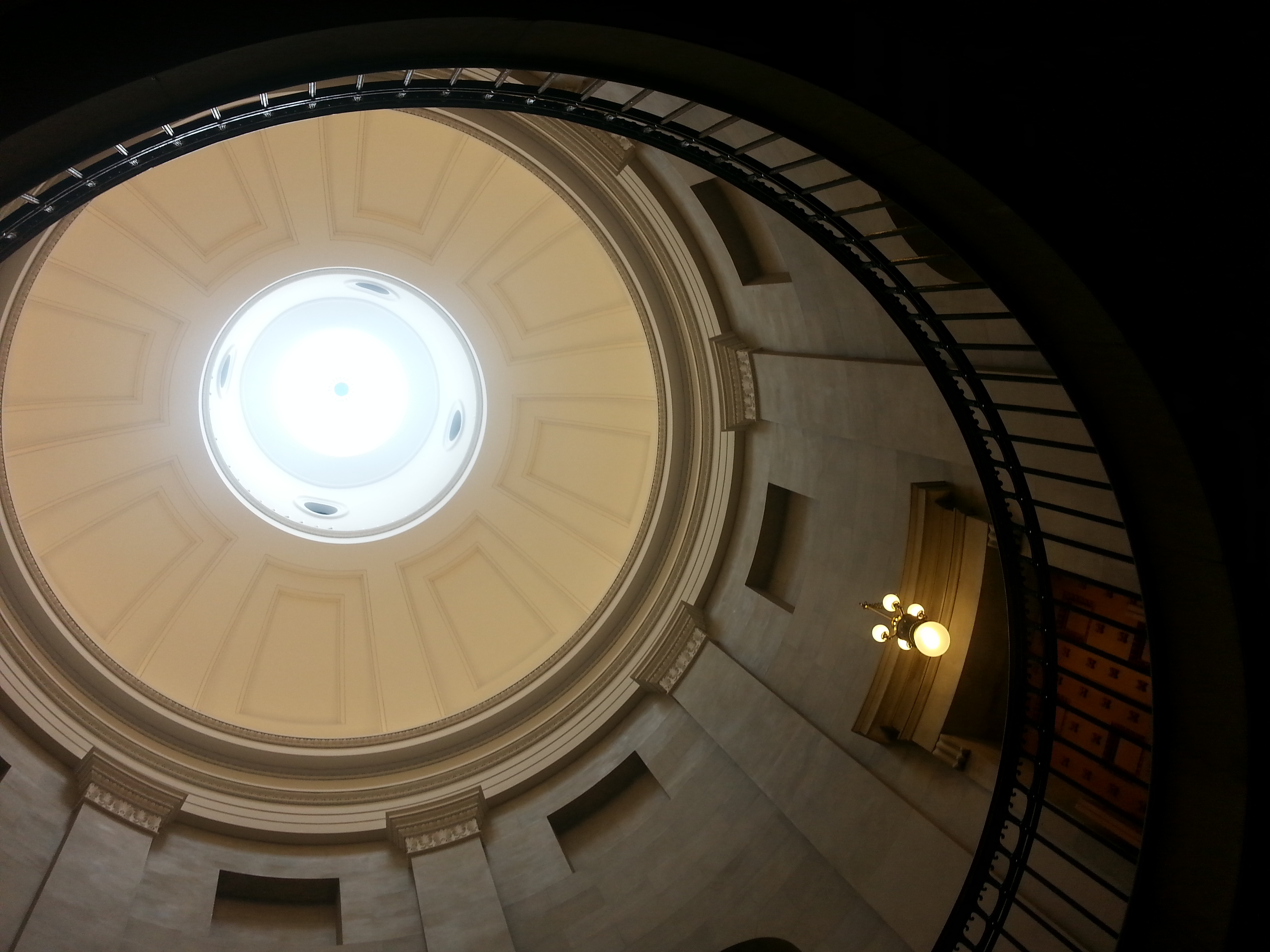 This room housed the State's Legislative Committee from the 1840s to the 1860s. 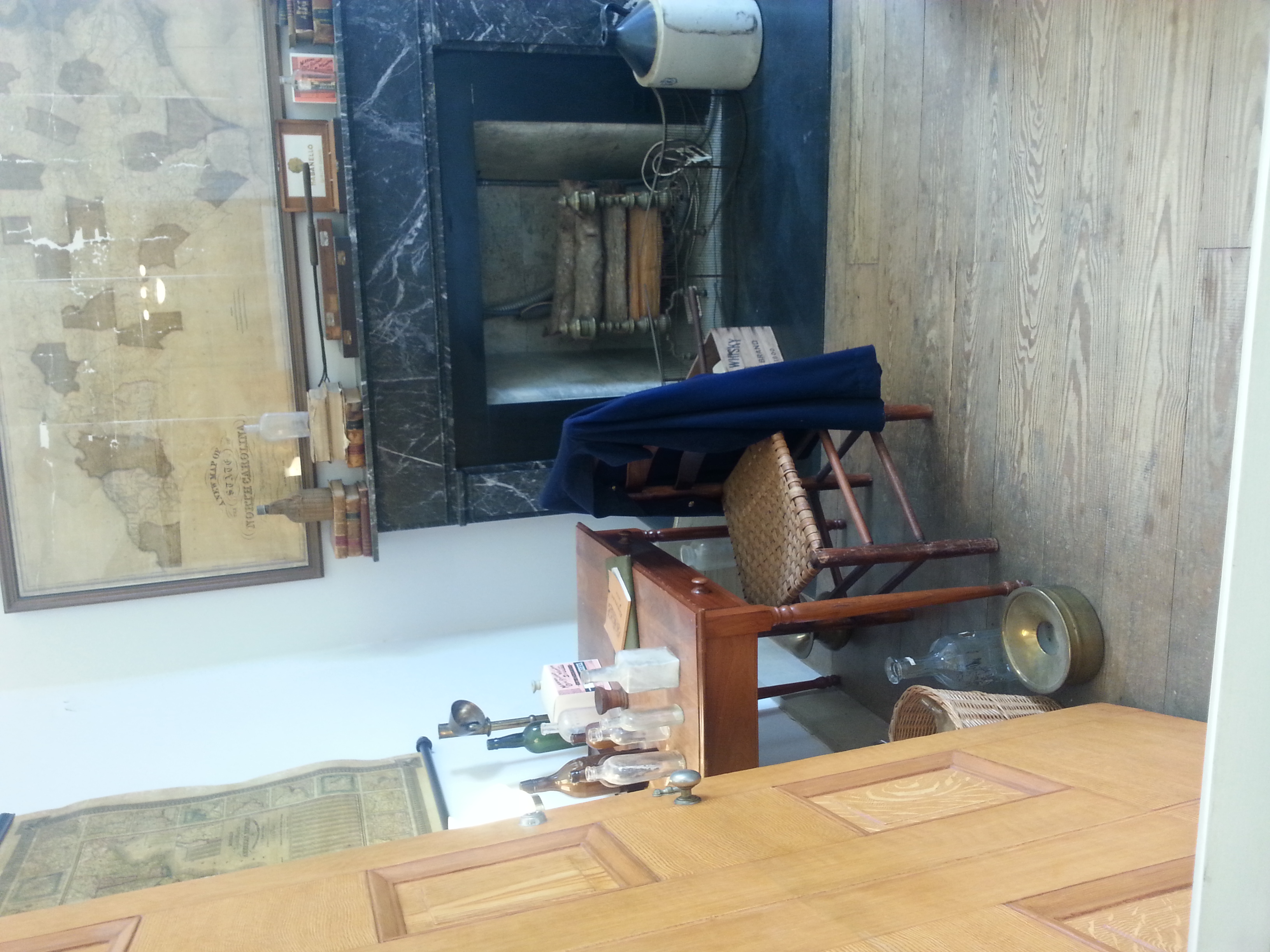 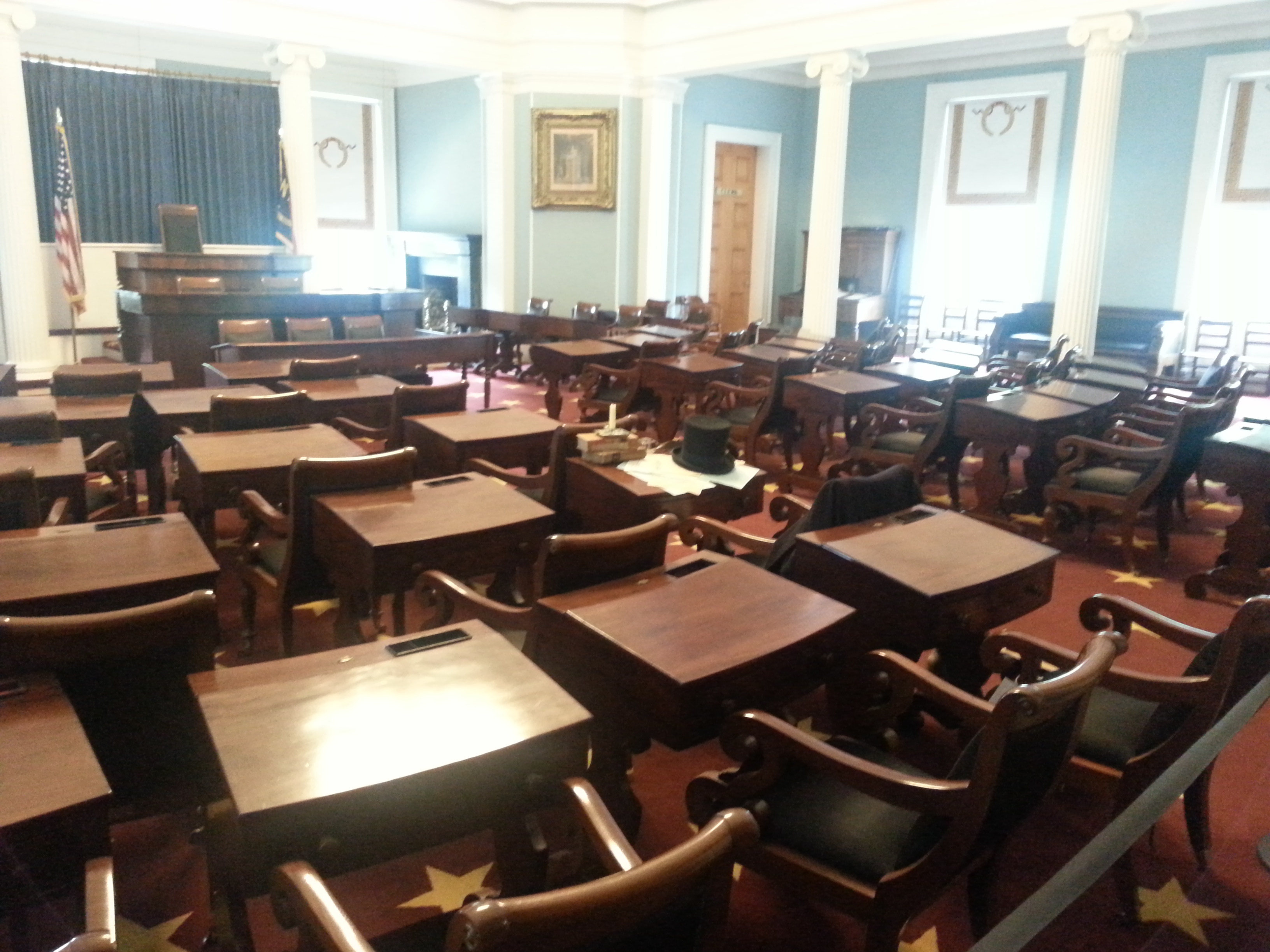 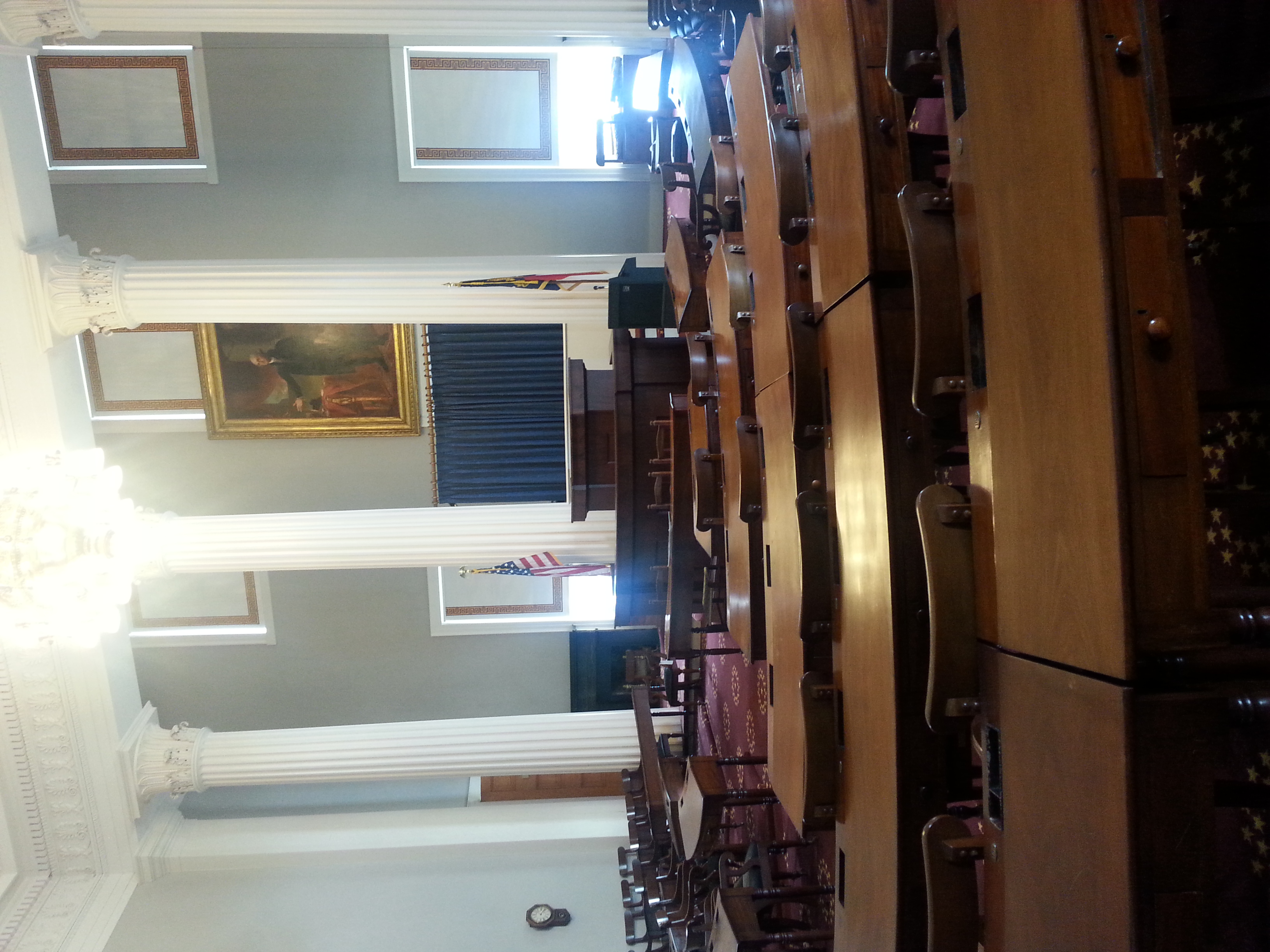 This room was once home to the State Library, which moved elsewhere in the early twentieth century. 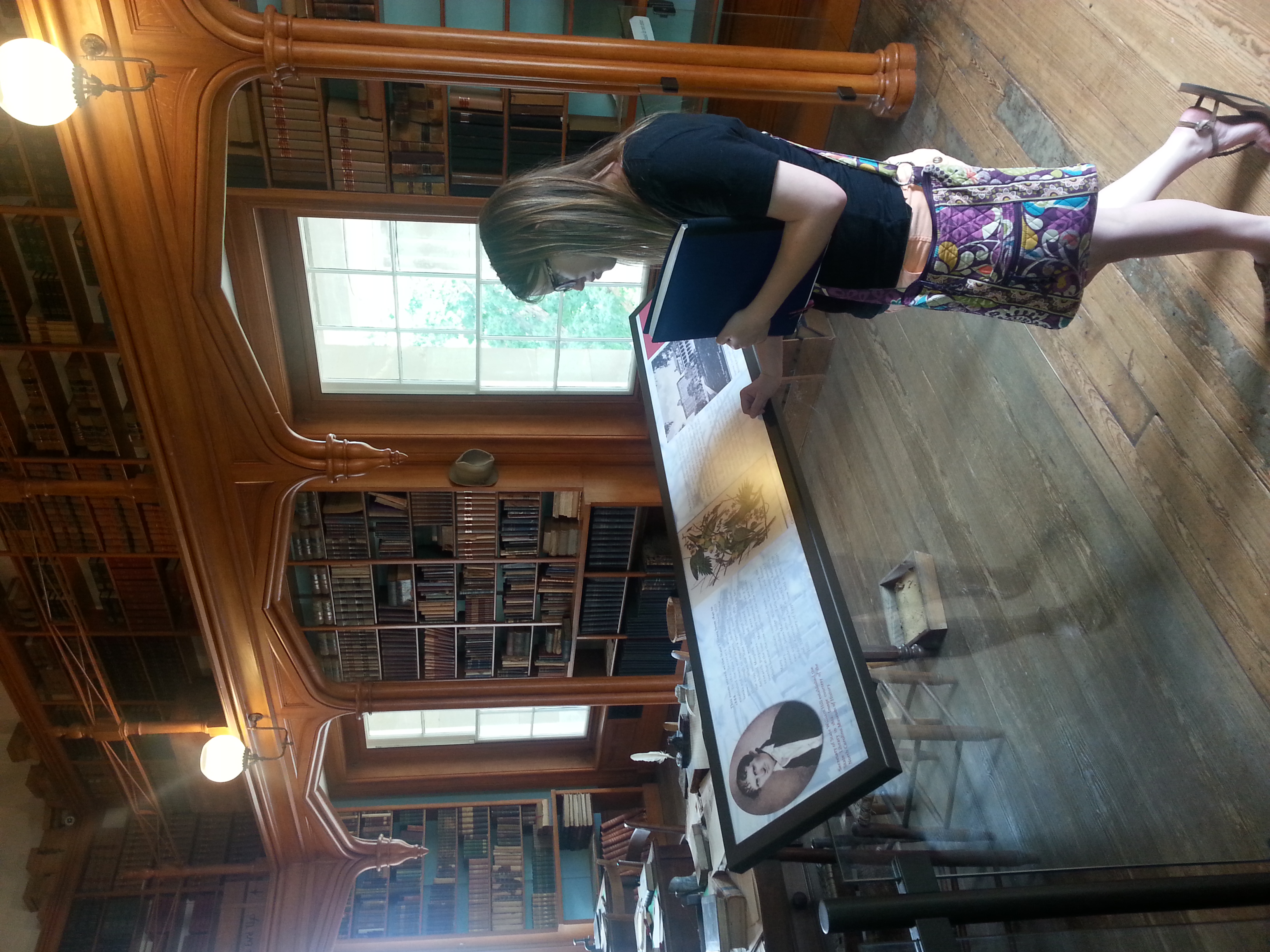 This final photograph symbolizes the current purpose of the Capitol: to house the office of the governor. Roy Cooper's office is shown in this photograph. 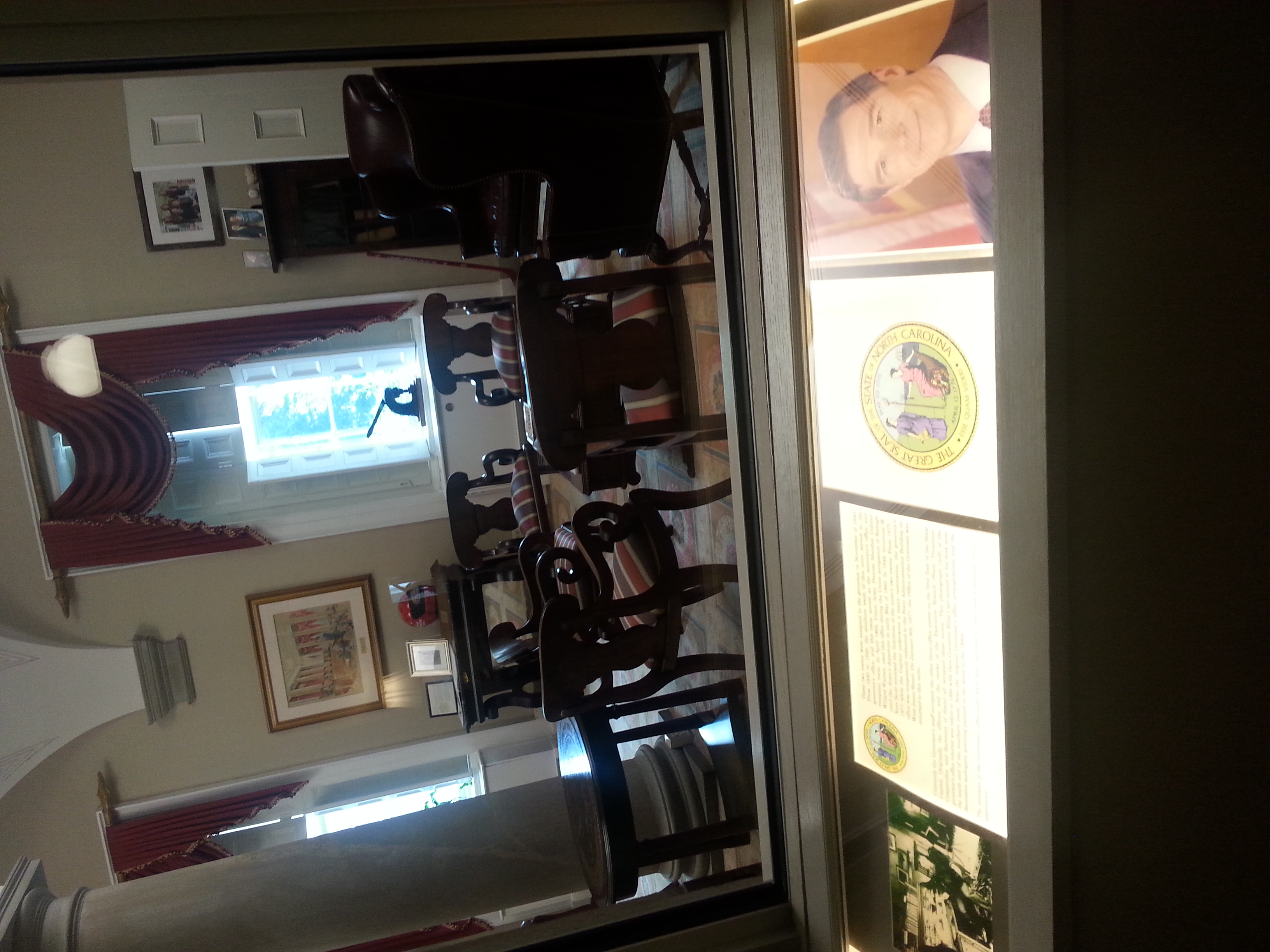 This historic buidling was completed in 1840, but it was not the first Capitol building the state had constructed, nor was Raleigh the first capital city of North Carolina. North Carolina was without a capital city for much of the colonial period. During this period, the government was migratory as the Assembly moved from place to place. In 1722, in an attempt to rectify this slight, the General Assembly chose Edenton to be the state capitol. However, this city was seemingly “capital” in name only.

Following the migration of the government after the establishment of a capital at Edenton, several efforts were made to establish a capital elsewhere, with New Bern being labeled the new capital in 1776. However, like its predecessor, New Bern’s status as the capital of North Carolina was short lived. Due to the “turmoil of the Revolutionary War-along with mounting demands for a more geographically centered location-...the General Assembly [was prompted] to move the capital from coastal New Bern in 1778.”(NC Historic Sites).  The government again became migratory until 1788, when, in the midst of debate over the ratification of the Constitution, “a State Convention voted to fix the capital within ten miles of Isaac Hunter’s plantation [my research has indicated that while Isaac Hunter was indeed a planter, the “plantation” the web page refers to was a tavern that was a popular lodging place for government officials] in Wake County.”(NC Historic Sites). The Assembly purchased one thousand acres of Colonel Joel Lane’s plantation, and plans were drawn for Raleigh modeled after the city of Philadelphia. Construction of a “State House” began in 1792, effectively cementing  Raleigh’s status as the capital of North Carolina..

History of the Capitol Building

Much like North Carolina’s various capital cities, the physical representation of the capital also underwent many transformations. Following the establishment of Raleigh as the state capital and permanent seat of government in 1792,  the first incarnation of the capitol building was constructed. This building, named the State House, was a “simple, two-story brick building” built on Union Square and completed in 1796. Over the next twenty-eight years, the State House was remodeled, with the addition of a third floor and eastern and western wings. However, much like the government’s quest for a capital, their attempts to have a physical capital were hindered by outside events. The State House was destroyed by fire in 1831, and the “General Assembly of 1832-33 ordered a new Capitol be built as an enlarged version of the old State House-that is, a cross shaped building featuring a central, domed rotunda.”(NC Historic Sites). This new Capitol’s features were patterned after Greek architecture: moldings, ornamental plasterwork, and the honeysuckle crown atop the dome of the rotunda all possessed Greek features. Additionally, the new Capitol featured many statues and portraits of George Washington, an example of which can be found in the photos posted here. The building was completed in 1840, at a total cost of $532, 682,34. After its completion, the Capitol served as a meeting place for the government of the state: it housed “all of North Carolina’s state government [including the State Library and Supreme court, as well as the House and the Senate] until 1888.”(NC Historic Sites). The Supreme Court and the Library moved into a separate building that year, and the General Assembly moved into the State Legislature building in 1963.

Today, the Capitol serves a drastically different purpose than its original one. Instead of housing all of the State’s government, it merely houses the offices of a few officials: the governor and lieutenant governor, as well as their staff. Instead of acting as a private place for government functions, the Capitol is now a museum of sorts where individuals can come to learn about the history of the building as well as the capital city.

The Capitol is open Monday-Saturday from 9 am to 5 pm. It is closed on Sundays and most major state holidays. Visitors are encouraged to call ahead to confirm hours of operation for the day they wish to visit.