Nanih Waiya Mound holds great significance for the Choctaw Indians, who consider it to be the heart of their culture. It is 25 feet tall, 218 feet long, and 140 feet wide. The mound plays a central role in the Choctaw creation stories, one of which says that the mound gave birth to the Choctaw ancestors who then gave rise to the tribe. It is not known exactly when the mound was built as archaeological excavations have not taken place. However, pottery shards have been found nearby and these date from 100 B.C.-400 A.D.. Similar mounds found throughout the midwest built by the ancient Mississippian cultures date to 1000-1600 A.D., so it is possible that Nanih Waiya Mound was built during this period. The mound and the immediate surrounding area, which is a state historic site, was added to the National Register of Historic Places in 1973.

The Choctaw Indians consider Nanih Waiya Mound to the heart of their culture. 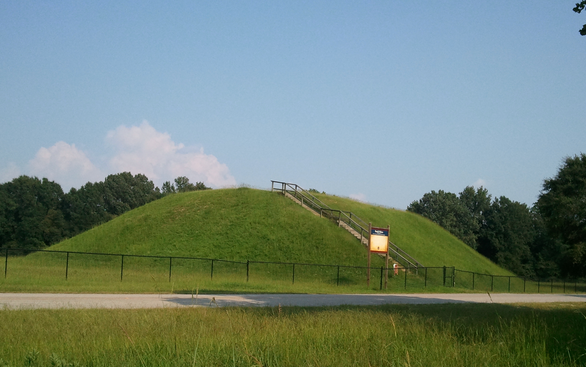 The mound has largely remained in good shape, which cannot be said of the other mounds nearby (these are out of the park boundary) that have been mostly leveled by cultivation. The site also features a long earthen embankment, of which only a portion remains.