Built in 1931, the District of Columbia War Memorial honors the 26,000 residents of D.C. who served in World War I. With architecture inspired by ancient Greece and Rome, it was designed as a functional bandstand for commemorative and military concerts that were popular in the early to mid twentieth century. Today, it is part of the National Park Service's National Mall and Memorial Parks, where it has recently undergone restoration. It is the only locally-focused memorial on the National Mall.

The District of Columbia War Memorial is often missed on the National Mall, though recent restorations and the centennial of World War I have renewed public interest. Photo courtesy of Tim Evanson, Wikimedia. 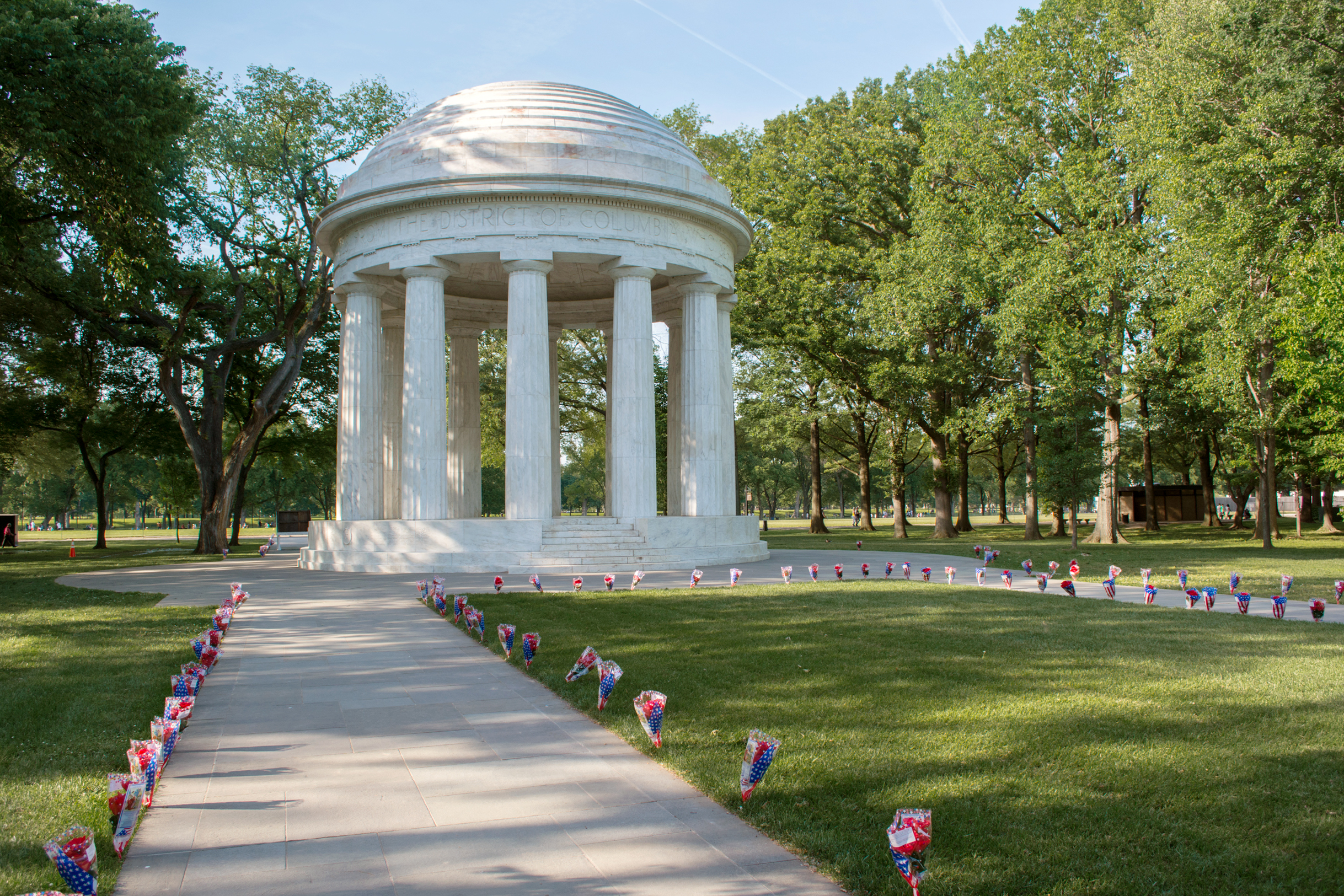 The District of Columbia War Memorial was built as a contemporary bandstand with a neoclassical design, with marble, columns, and a dome reminiscent of ancient Greece and Rome. Photo courtesy of 350z33, Wikimedia. 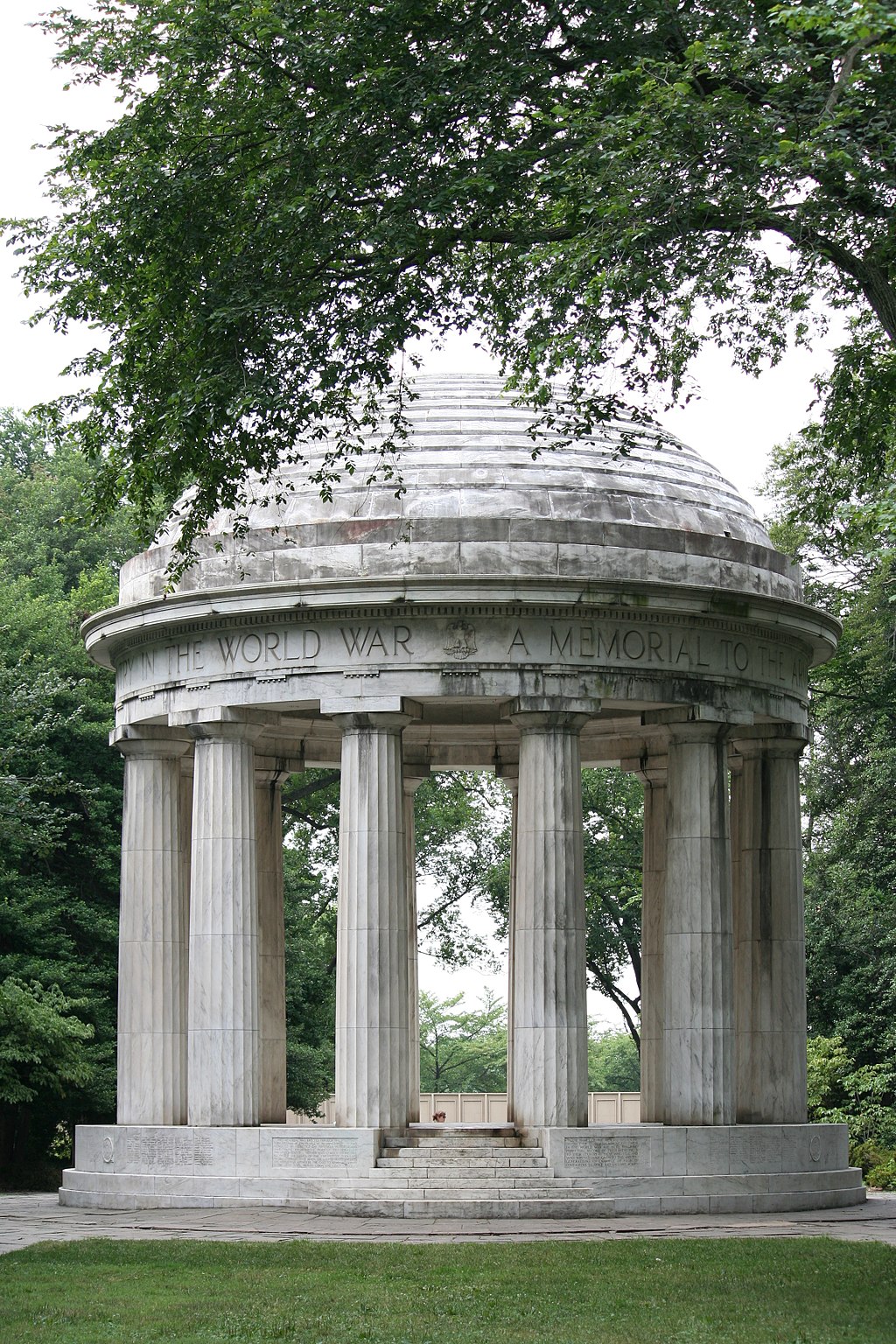 Early rendering of the District of Columbia War Memorial by Frederick H. Brooke. Courtesy of the National Park Service and Commission of Fine Arts. 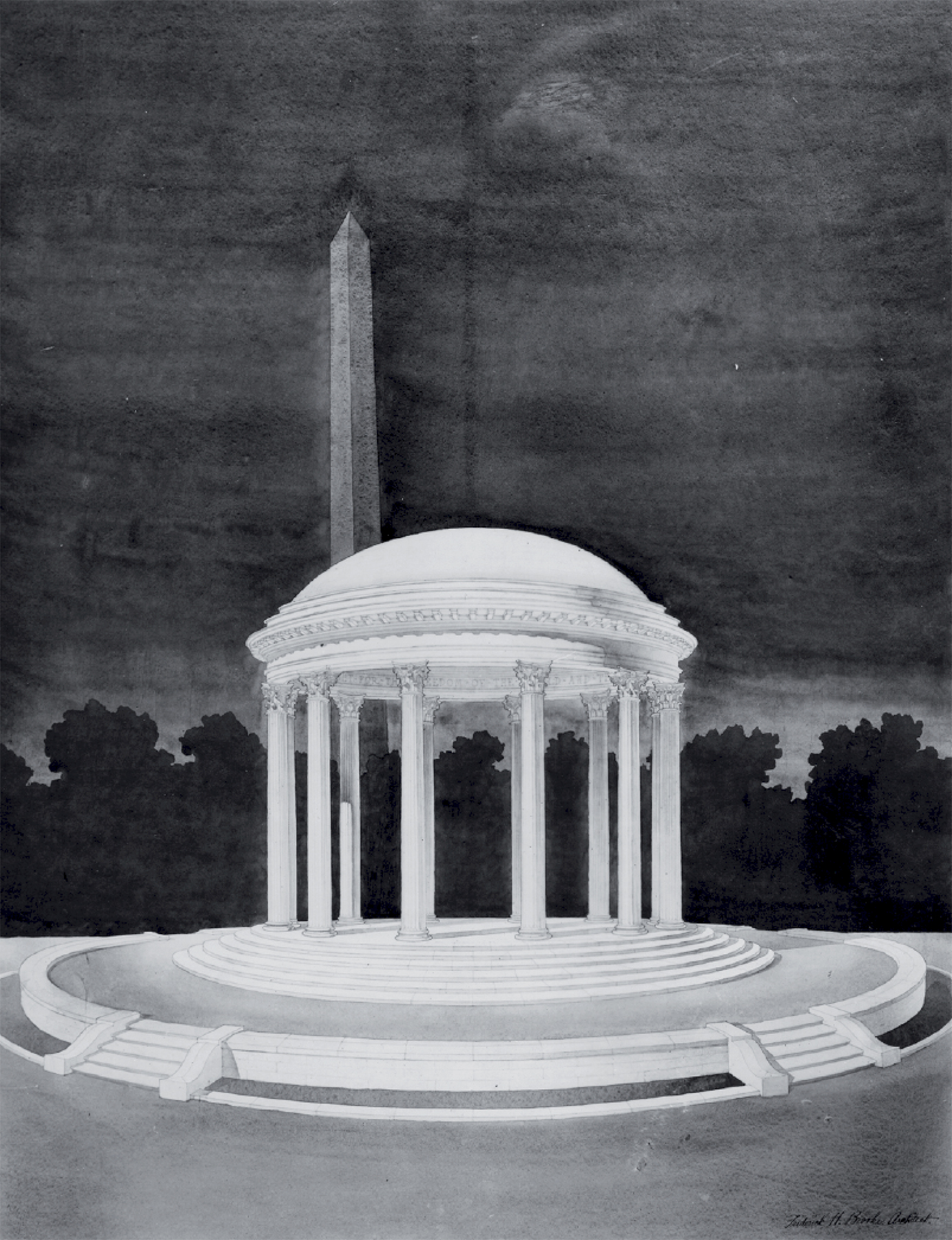 Dedication of the District of Columbia War Memorial on November 11, 1931, the thirteenth anniversary of Armistice Day. Photo courtesy of the National Register of Historic Places form. 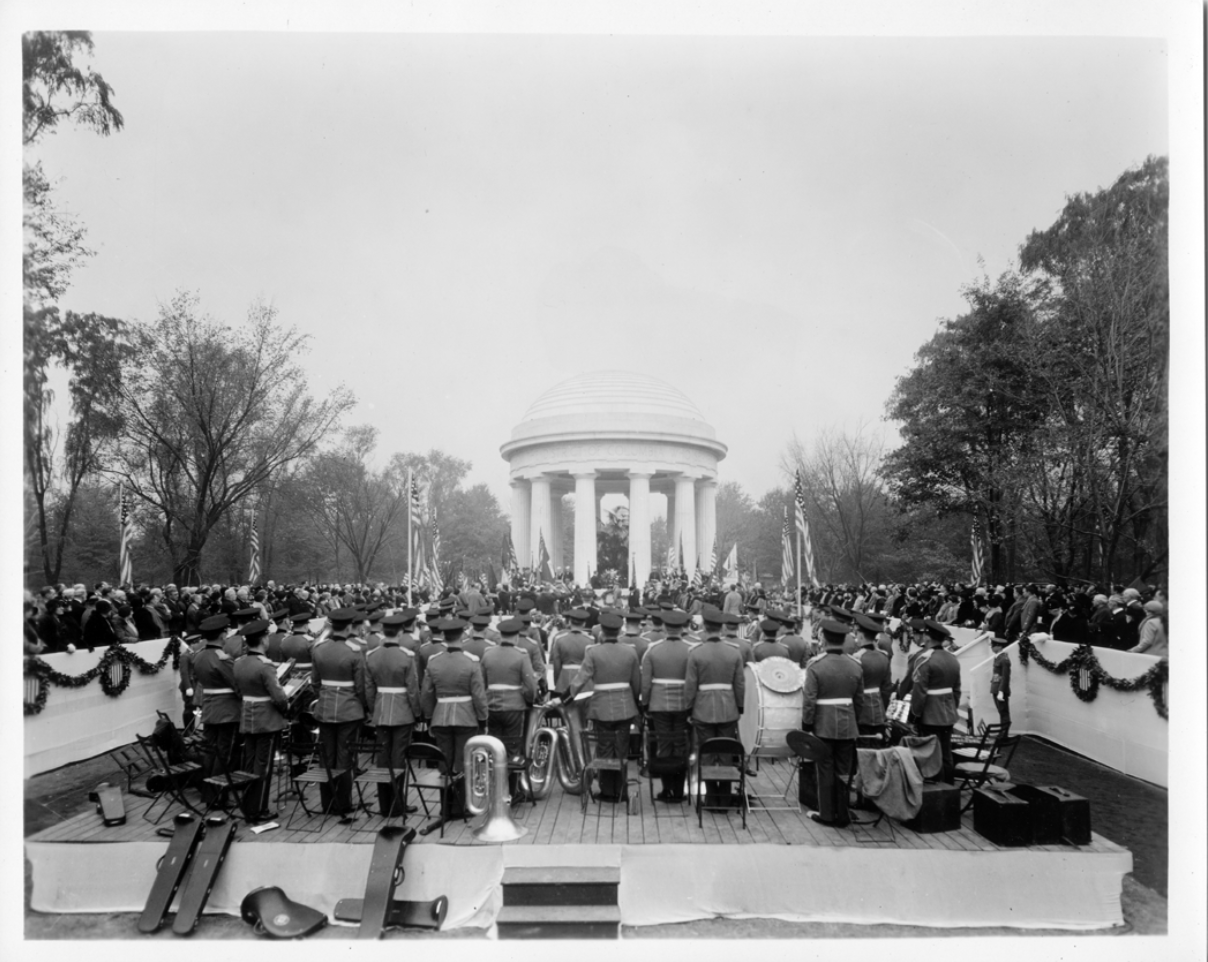 499 names of fallen service members are listed alphabetically on the memorial. Photo courtesy of the National Park Service. 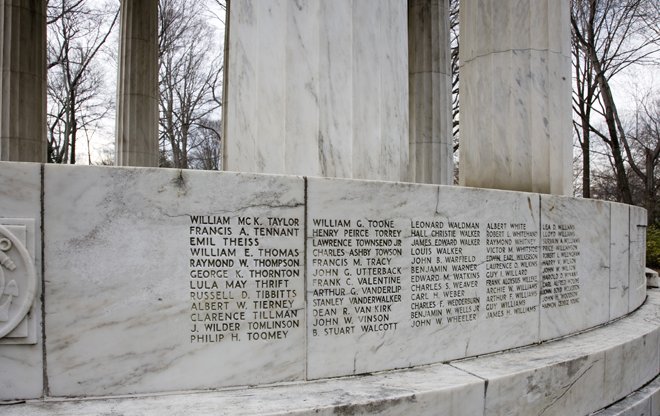 A bronze medallion on the center of the floor depicts an eagle grasping arrows in its talons. Photo courtesy of the National Park Service. 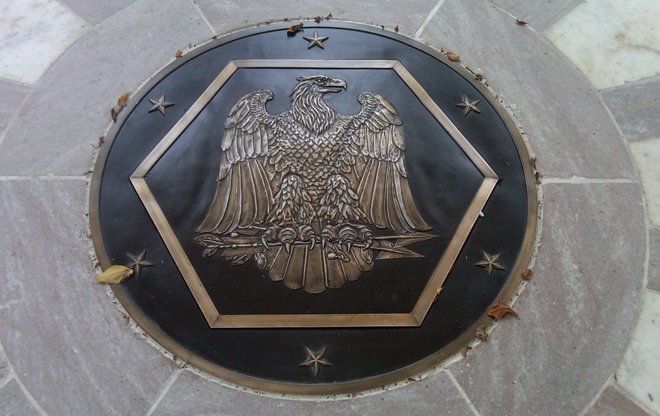 Nestled in a grove of trees alongside the Lincoln Memorial Reflecting Pool, the District of Columbia War Memorial is an easily hidden yet meaningful tribute to the 26,000 D.C. residents who served in World War I. Also called the Great War, World War I was the largest international conflict at the time, involving 70 million military personnel from over two dozen countries between 1914 and 1917. The United States remained neutral until declaring war on Germany in April 1917 and entering the conflict as an independent power. 4.7 million Americans served in the war and more than 116,500 lost their lives.1 The District of Columbia War Memorial is often overlooked, much like the history of the war itself, though recent restorations and plans for a national memorial are drawing attention back to this early war memorial on the National Mall.

Almost immediately after World War I ended, citizens of D.C. called for a memorial honoring local service members. It took years before their hopes came to fruition. The most popular idea came from Janet Noyes, a civic activist in D.C. Her idea involved replacing a wooden bandstand on the National Mall with a marble structure that would host military concerts and serve as "living memorial" to veterans and fallen service members. In 1924, Congress established the District of Columbia War Memorial Commission to coordinate this memorial. Janet Noyes served as head of the women's committee while her husband, Frank Noyes, the owner of the Washington Evening Star newspaper and president of the Associated Press, served as chairman. The commission, comprised of notable Washingtonians, hired local architects and construction contractors. Volunteers organized teams to solicit donations from street car and bus companies, radio broadcasting companies, motion picture theaters and vaudeville houses, hotels, banks, large stores, the Boy and Girl Scouts, police and fire departments, and women's clubs and organizations. President Calvin Coolidge made one of the first donations to the project, while superintendent of D.C. schools, Dr. Frank W. Ballou, encouraged the 70,000 schoolchildren to donate five cents to the project. Fundraising, however, was still a slow process that some attributed to the city's disenfranchisement of its citizens; Washingtonians, for example, did not receive the right to vote until 1961. Eventually, enough funds were raised to begin construction in the spring of 1931.2

The memorial would be an architecturally beautiful and practical addition to the National Mall. The Commission of Fine Arts approved designs and determined it would be the first memorial in West Potomac Park. The memorial was designed by Frederick H. Brooke, Nathan C. Wyeth, and Horace W. Peaslee, all of whom were prominent architects in the D.C. community. The bandstand was a common feature of towns and cities across America, though the one on the National Mall would be more grand in design and materials. It was built in the neoclassical design reminiscent of ancient Greece and Rome. Neoclassicism became popular on the National Mall in the early twentieth century, with the Lincoln Memorial and National Museum of Natural History already constructed and the Jefferson Memorial to come. The memorial bandstand included 12 columnns, a domed roof, and marble from Vermont. 499 names were inscribed in the marble to commemorate those who died in service or due to an injury before the war ended; seven of these names belonged to women. As construction continued, landscaping also beautified the area with oak, beech, elm, and tulip trees. On the National Mall, the District of Columbia War Memorial would be a focal point for music and social gathering during periods of cultural change and economic depression.3

The names of the men and women from the District of Columbia who gave their lives in the World War are here inscribed as a perpetual record of their patriotic service to their country. Those who fell and those who survived have given to this and to future generations an example of high idealism courageous sacrifice and gallant achievement.4

The District of Columbia War Memorial was dedicated on November 11, 1931, the thirteenth anniversary of Armistice Day, which ended World War I. President Herbert Hoover presided and made an appeal to world peace, his address beginning at 11 o'clock, the same time the war had ended in 1918. Renowned musician John Philip Sousa brought the memorial to life. Sousa led a patriotic 20-minute performance with the United States Marine Band. Songs included "The Stars and Stripes Forever," "Taps," and "The Star Spangled Banner." The event welcomed thousands to the National Mall, including World War I veterans, Gold Star Mothers, the American Legion, the Veterans of Foreign Wars, and the Disabled American Veterans. Americans across the nation listened on the radio. In the coming years, the memorial would be a significant concert venue, each performance honoring World War I service members.5

Time and nature took a toll on the District of Columbia War Memorial. Not even a decade after construction, the memorial was already suffering water damage. In 1939, the Public Works Administration rehabilitated the walkways and mitigated water damage with gutters and an assortment of new tree species on the grounds. The use of the memorial as a bandstand also fell out of fashion, as new traditions, musical tastes, and memorials changed the culture of the National Mall. As the structure deteriorated, World War I veterans passed away. In 2008, the last living American veteran of World War I, Frank Buckles, called for the memorial to be restored and rededicated as a national memorial. The American Recovery and Reinvestment Act of 2009 set aside $7.3 million to restore the structure and grounds, which began in 2010. It reopened November 11, 2011, on the 93rd anniversary of Armistice Day. Though this memorial remains dedicated to D.C. residents, the National World War I Memorial in D.C. is under construction in Pershing Park. Today, music occasionally lofts from the memorial. It remains a hidden gem worth discovering in the National Mall and Memorial Parks.6