This historical marker along U.S. Route 219 was dedicated by the state of West Virginia and recognizes the history of the Seneca Trail, a path that generally follows present-day U.S. Route 219. It entered the present state a few miles west of Bluefield and followed the Bluestone River to the New and Greenbrier rivers to the vicinity of White Sulphur Springs. It then followed Anthony Creek down to the Greenbrier River near the present Pocahontas – Greenbrier County line which then ascended to the vicinity of Hillsboro and Droop Mountain. It then made its way through present Pocahontas County by way of Marlinton, Indian Draft Run, and Edray. Passing into present Randolph County, it descended the Tygart Valley River from its headwaters and passed through the vicinity of present-day Elkins, after which it proceeded north by ascending Leading Creek. It exited Randolph County when it crossed Pheasant Mountain. Descending the Left Fork of Clover Run into present-day Tucker County, it crossed the Shavers Fork of the Cheat River and exited that county by way of Horseshoe Run northeast of St. George. Here it also exited the present state of West Virginia near Oakland, Maryland. 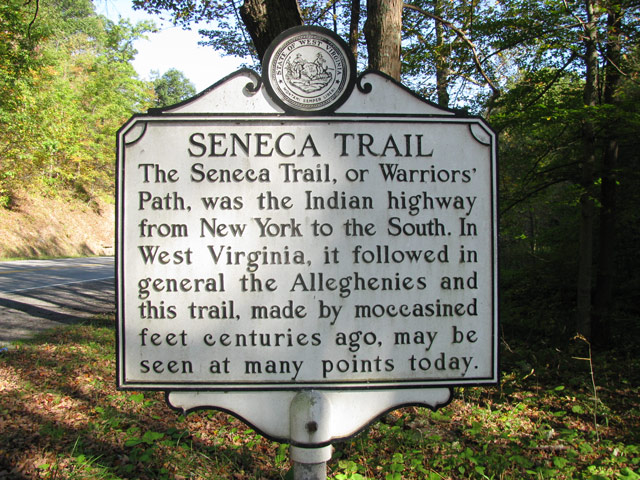 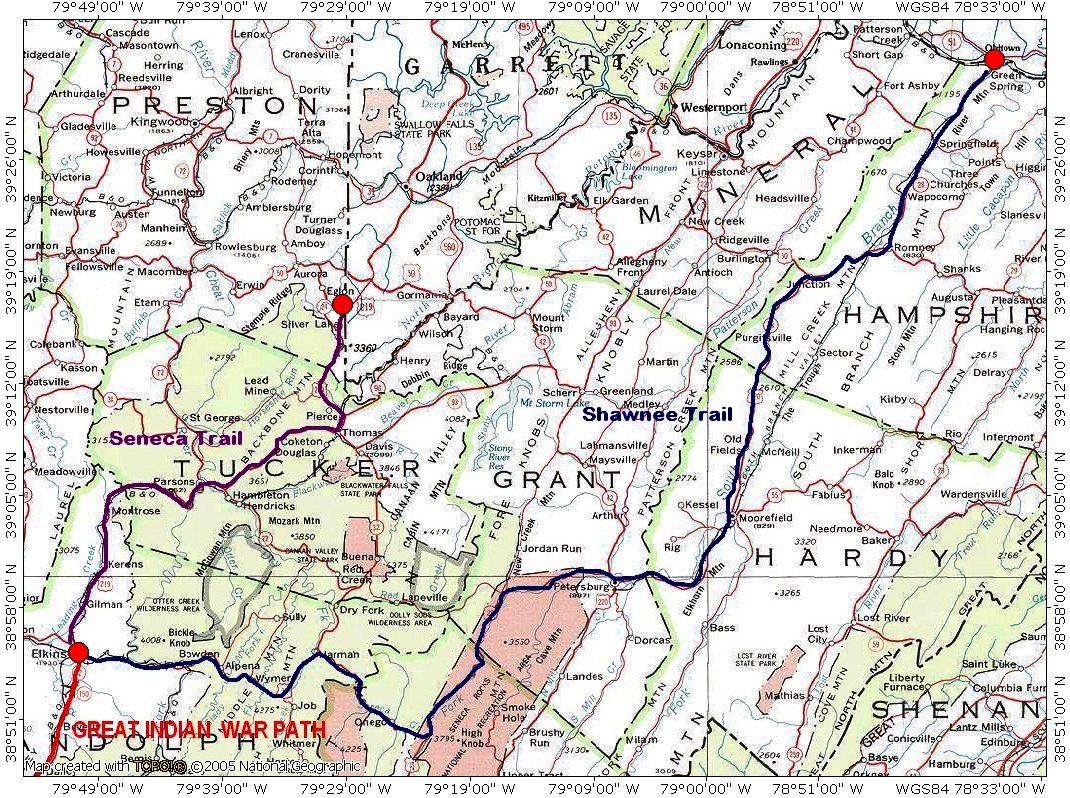 The route it followed through West Virginia was an old one, and well-traveled. Long ago, it had been a major Indian footpath. The Seneca Trail, known also as the Great Indian War and Trading Path, was a part of a network of trails stretching from the Deep South to modern day New York that was used by the Catawba, various Algonquian tribes, the Cherokee, and the Iroquois Confederacy.

As European settlers began moving westward through this area, King George III drew a boundary in the Proclamation of 1763 that followed sections of the Seneca Trail. No settlers were to move west of this line. The explorers and pioneers could not be held back, however, and some of the roads left by their great westward push still intersect Route 219 today. Today’s US Route 60 approximates the James River and Kanawha Turnpike, a route proposed by a young surveyor named George Washington seeking to give Virginia access to trade in the West.

It was Thomas Jefferson who, in 1809, authorized the construction of the Cumberland, or National, Road. This road, the first major improved highway built by the US government, connected the Potomac and Ohio Rivers and further opened the settling of the West. The Northwestern Turnpike was completed at about this same time, and was one of the first major roads crossing the Appalachian Mountains. Both the Cumberland Road and the Northwestern Turnpike are followed approximately by today’s Route 50. Shortly after, the Staunton-Parkersburg Turnpike (now US 250) was engineered through the steep terrain by Claudius Crozet in order to connect the upper Shenandoah Valley to the Ohio River.

The modern wayfarer may know nothing of this history as they zoom along Route 219. Yet they may find that they ease off the gas a little as they drive this mostly rural, scenic highway. This road has been traveled before, and a trip down it is meant to be savored.