Most people in Kansas know of William Quantrill’s raid and burning of Lawrence as his most famous and only attempt to burn and raid a town, but there is actually another town where he started. In Shawnee Kansas Quantrill seized an opportunity to practice raiding and burning a town. This historical marker in Shawnee Kansas commemorates the second raid and burning of the town by William Quantrill in preparation for his similar act on the town of Lawrence. That’s correct, Quantrill burned and raided the little town of Shawnee twice. The fist burning occurred on October 17, 1862, and the second burning occurred in the summer of 1863. Shawnee is located just 35 miles away from Lawrence and this marker sits in front of the Shawnee Town Hall.

The historical marker for Quantrill's raids on Shawnee sit on the southwest corner of the Shawnee Town Hall. 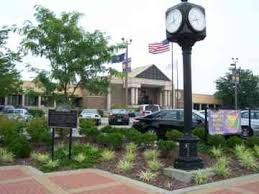 The historical marker remembering Quantrill's raids on Shawnee, mostly mentions the first burning and raid of Shawnee on October 17th, 1862. 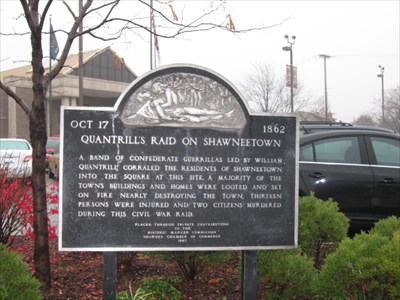 William Quantrill, a bushwhacker from Missouri who most famously burned and raided not only Lawrence, but also Shawnee. 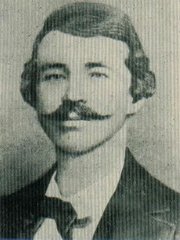 First, a little overview on William Quantrill. William Quantrill was a name feared throughout the free-state of Kansas. He and his posse of bushwhackers from Missouri are the ones who performed several raids, most ending in the murdering of the people and the burning of the buildings throughout the towns. Quantrill’s most famous raid took place in Lawrence where his posse murdered 183 men and boys aged 14 to 90, and burned the entire free-state city to the ground. Quantrill performed these raids in order to scare and intimidate the people of the free-state of Kansas, as his native Missouri was pro-slavery. The attacks between the Kansas Jayhawkers and the Missouri Bushwhackers occurred mostly during the period known as “Bleeding Kansas”, but acts such as the burnings of Shawnee and Lawrence occurred during the Civil War.

The first raid took place on October 17th, 1862. Quantrill and his gang of roughly 140 bushwhackers stormed into town and corralled the residents into the town square, next to where the present-day City Hall is. It is said that in the first raid the bushwhackers performed was in order to get clothing (all clothing was handmade back then) and horses. There were only two Shawnee residents murdered in Quantrill’s first raid. Once Quantrill had everything he desired, his band of bushwhackers set fire to the town and burned all of the fewer than twenty buildings Shawnee had at the time.

The second raid took place during the summer of 1863. This raid was entirely in preparation for the raid on Lawrence that would take place in August of 1863. The raid was to scout for an escape route for the planned attack on Lawrence. The route had to be devoid of Union soldiers, as the bushwhackers would be executed immediately if they encountered any Union troops. The town of Shawnee was small and unimportant at the time so no Union soldiers were there, giving the bushwhacker group their best escape route. Although the second raid did not include as much stealing as burning, thirteen people were injured. A small side note, the second raid included two future outlaws and widely known stage-coach robbers Frank and Jesse James as part of Quantrill’s bushwhacker posse.

Overall, while many residents of Shawnee have never heard of the burning of Shawnee, myself included, the memory still lives on today. The memory of this event will no longer only be tied to the small historical marker, it will be taught in the seventh-grade curriculum throughout USD 232 (Johnson County School District), as part of the “Bleeding Kansas” and Civil War time period.