From the day it opened its doors in October of 1924 to its demolition in 1999, the Ellis Auditorium in downtown Memphis acted as the stage for many important eras of history. Confederate Veterans once held their annual convention in what was then called the Memphis and Shelby County Auditorium, and entrepreneurs sold their wares at the marketplace while couples danced the night away on ‘revolutionary’ removable, hardwood floors. In 1956, Elvis played his first sold-out show for the screaming masses, pelvic thrusting his way into Rock n’ Roll history. Pro-wrestler Sputnik Monroe fought to end the practice of segregation, pointing his finger at the Ellis Auditorium and its seating policies. Other big names like Doris Day, Bob Hope, Katherine Hepburn, David Bowie, Ray Charles, Elton John and many, many more graced the stage at Ellis as well. While that stage has since been torn down, the memory remains alongside the Cannon Performing Arts Center which now stands in its place.

A picture of the Memphis and Shelby County Auditorium as it stood in 1926. Constructed by George Awsumb, it would not be renamed to the Ellis Auditorium and Marketplace until after the untimely death of Robert Ellis in 1930. 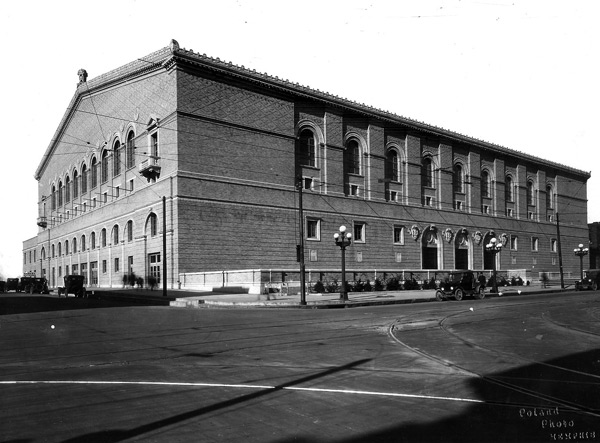 Photo of George Awsumb, the creative mind behind the architectural design of the auditorium, which was considered an innovative marvel ahead of its time. 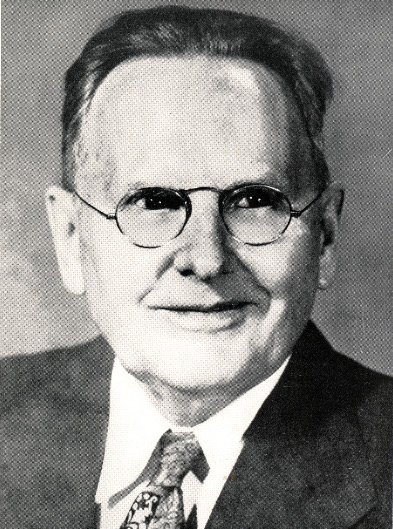 Photo of Robert R. Ellis, President of the Memphis Chamber of Commerce and the man who truly pushed for the creation and completion of the auditorium. It would later be named for him after his death. 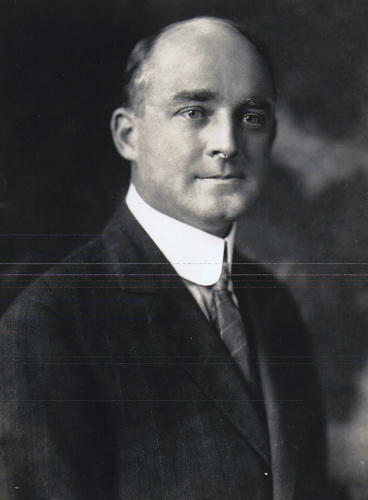 Badge given to and worn by Confederate Veterans who attended the 1924 convention held at the Memphis Auditorium. 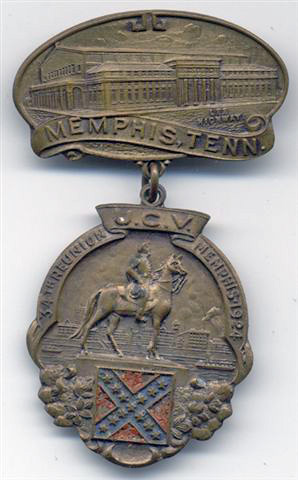 Photo depicting refugees from the 1937 flood registering with members of the WPA (Works Progress Administration) at Ellis before being transferred to Central High School. 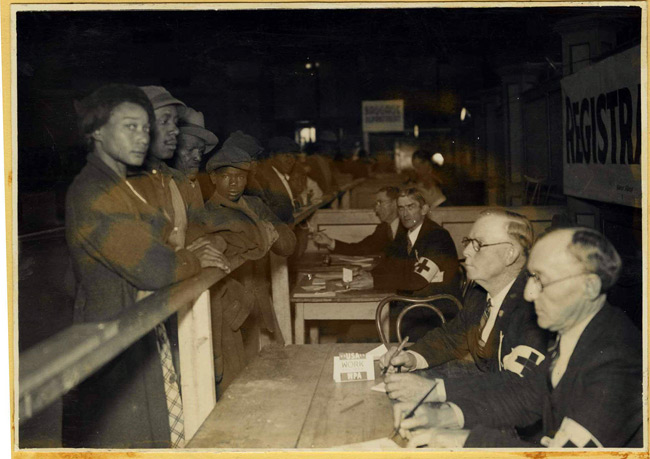 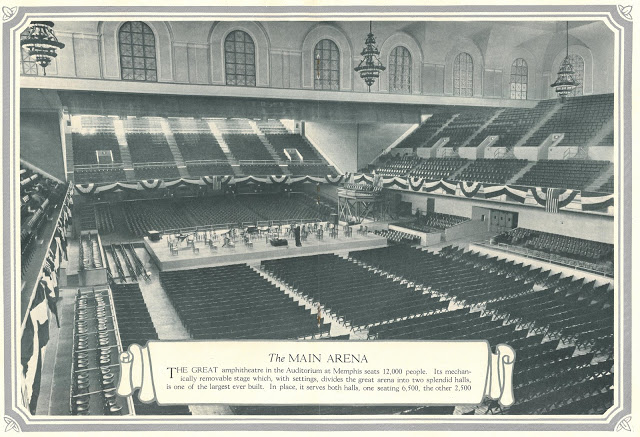 Another photo that was taken from the original brochure that shows off the removable hardwood floors which were a marvel of the age. 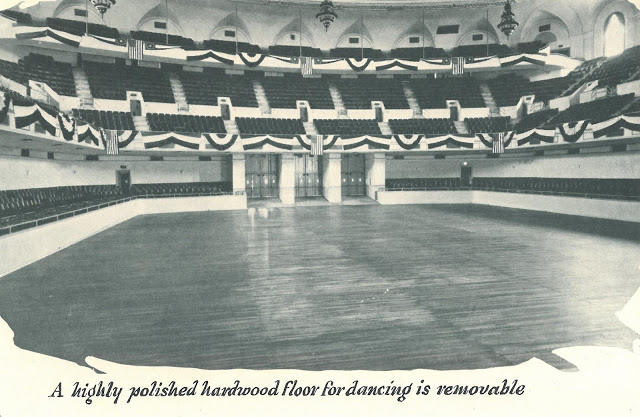 Photo showing the busy marketplace in 1924. City Fathers didn't believe that the concert hall alone would pay for their $3,000,000 investment. During the first few years after opening, the income from the rental of the marketplace actually earned the 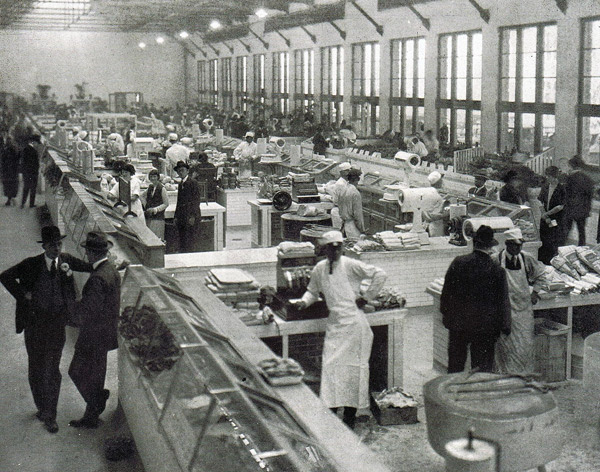 Photo depicting the demolition of Ellis Auditorium in 1999. The newly cleared lot would later serve as the home of the Cannon Center for Performing Arts. 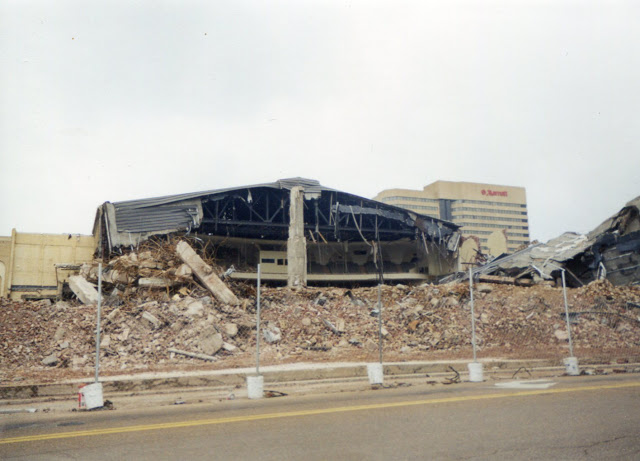 The Cannon Center for Performing Arts, complete with chrome statue designed by Vito Acconci, now stands where the Ellis Auditorium used to. 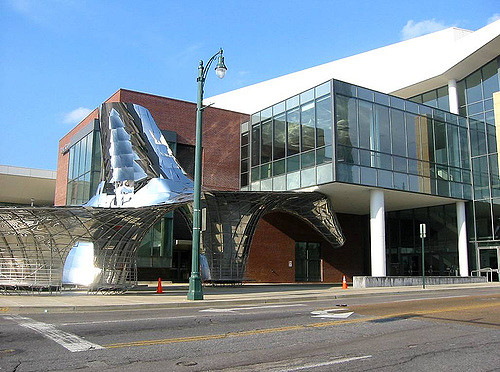 The Overton Hotel, which once served as a hospital for the Confederate and later the Union side of the Civil War. It was constructed on the corner of Poplar and First Street in 1860. 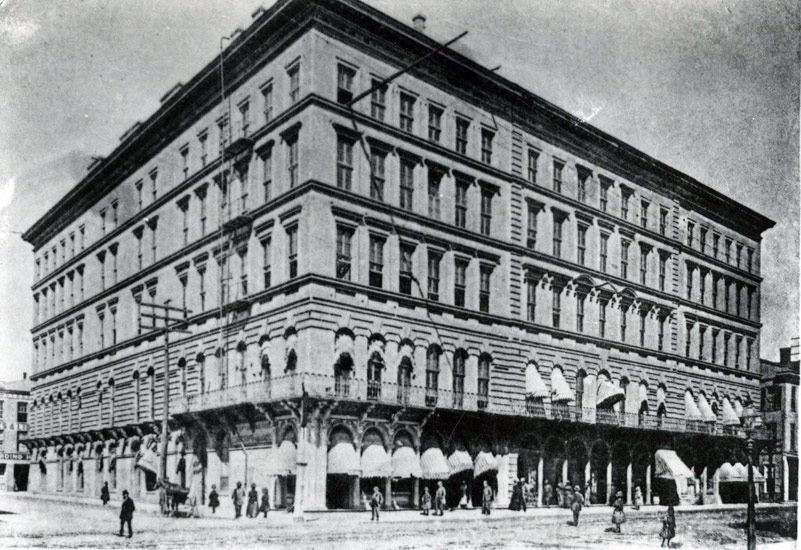 Postcard depicting the Shelby County courthouse, which briefly occupied 255 N Main St between the spaces of time of the Overton Hotel and Ellis Auditorium. 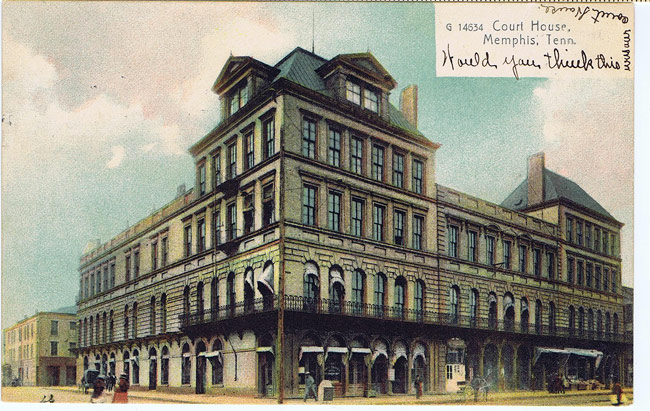 Elvis Presley and B.B. King backstage during a 1956 charity event hosted by WDIA for the Keel Avenue School for Handicapped Black. 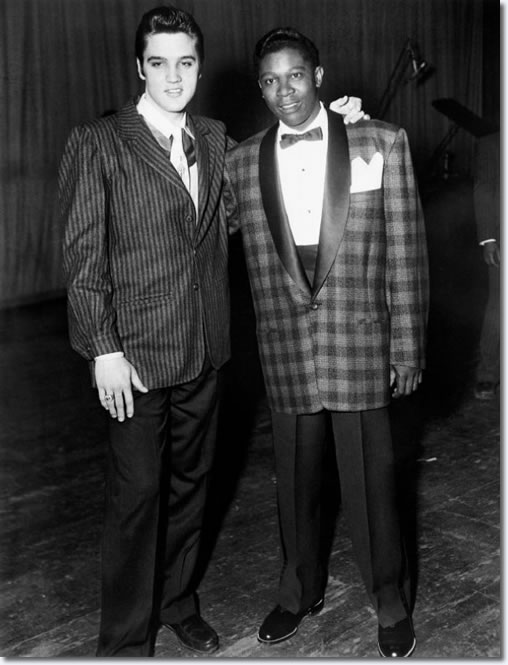 Ray Charles performing on the Ellis stage in 1961. 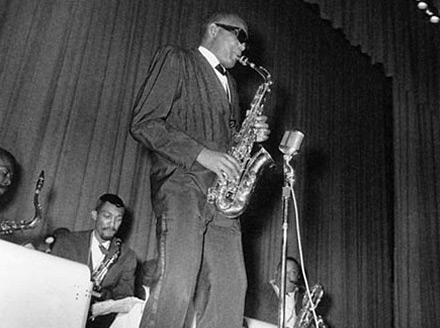 Promotional poster for a performance by Liberace at the Ellis Auditorium in 1954. This would be the first time that BOTH the North and South Halls were used for one performance. 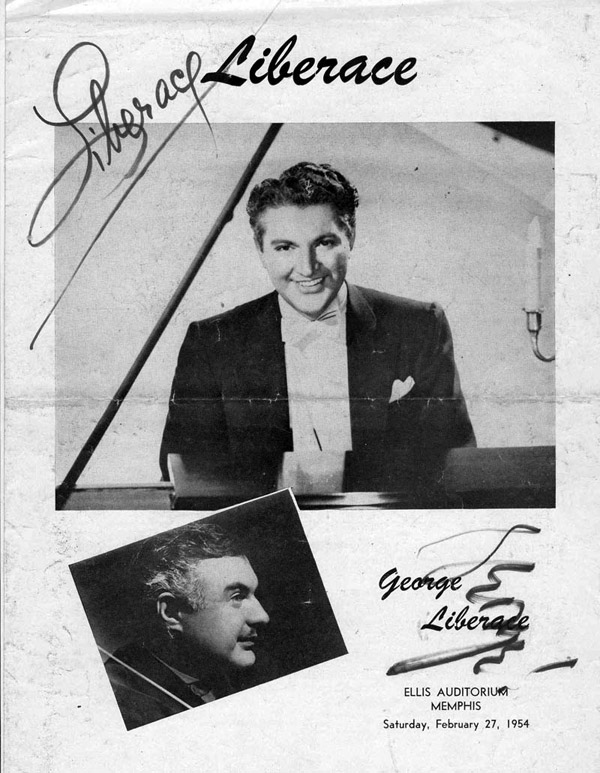 The auditorium didn't only host musical acts, but ensembles like the circus and dance troupes as well. This advert is for the 1954 Ice Revue, an ice skating troupe. 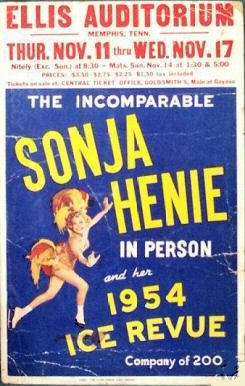 1969 promotional poster inviting you to join the Jimi Hendrix Experience at the Ellis Auditorium. 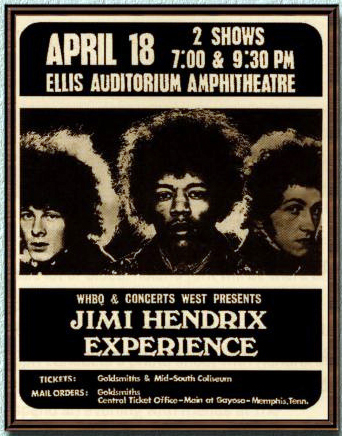 1972 promotional poster for David Bowie and the Spiders From Mars, offering advance tickets to the second stop in his first ever American tour. 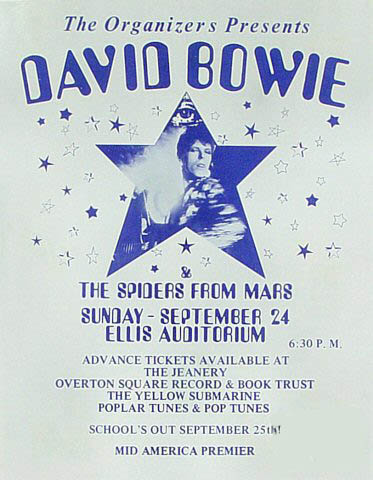 Ticket stub from one of Elvis Presley's many shows at the Ellis Auditorium. 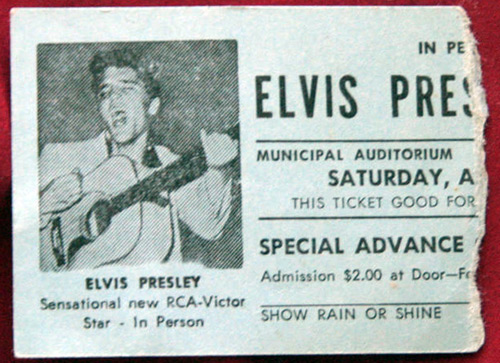 Photo of wrestler Sputnik Monroe, a flamboyant and savvy entertainer who realized the potential of catering to the overlooked Black market. He insisted that Ellis Auditorium end its segregation of Blacks and Whites or he wouldn't perform for them. 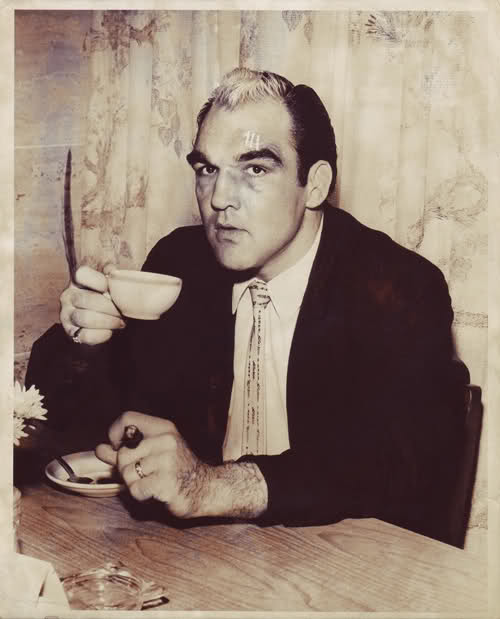 Before the conception of the Memphis Auditorium and Market House in 1924, the corner of Poplar and Front street had first acted as the location of the Overton Hotel, built in 1860. It knew some success in its day with the Grand Duke of Russia staying there in 1872, but it was its time during the Civil War that arguably holds the most historical interest. Transforming itself into a Confederate hospital at the start, it saw itself through the final days of the war by acting as a Union hospital for those soldiers that were previously the enemy. The hotel would later be bought in 1874 by the city of Memphis for $150,000 and used as the Shelby County Courthouse. Originally, the plans for the auditorium that would take its place had included a City Hall but, thanks to halted construction because of WWI and a later lack of funds, such plans were derailed in favor of what the early 1920s would bring.

The innovative design of the Memphis and Shelby County Auditorium began as the brainchild of George Awsumb, a successful architect from Chicago who had won a competition in 1919 to build the Memphis Municipal Auditorium. Post-war Memphis had experienced something of a building boom, and they longed for the addition of the auditorium and marketplace to bring further fame and recognition to their relatively young city, which was only a little more than a 100 years old at the time! This project was spearheaded by one Robert R. Ellis, then President of the Memphis Chamber of Commerce and the man after whom the auditorium would later be named in the wake of his untimely death in 1930.

The auditorium itself was a large undertaking from the start, acting not only as a stage for bands and musicians but as a convention center, retail produce market, and even an athletic arena. As the original brochure would have you believe, the Memphis Auditorium and Market House was a marvel of its time! They touted the wonder of their moveable, electric stage and they boasted 30,000 square feet of display space and seating enough for 12,000 people. The auditorium itself was split into two halls, the North and South. The larger North Hall was used for concerts, operas, circuses, sports, and the like, while the smaller South Hall was used for movies and shows. Despite all these marvels, Ellis Auditorium was not immune to the rules and regulations of a segregated Memphis; it also possessed a separate side entrance and balcony for its African American patrons.

Sputnik Monroe, born Rosco Monroe Merrick, was a professional wrestler who took offense to this practice. A supporter of desegregation and a savvy businessman, Monroe made a practice of frequenting black dominated spaces dressed in flamboyant costumes such as a purple gown and diamond tipped cane where he drank and fraternized with African American citizens. This often led to Sputnik being arrested on trumped up charges where he employed a black attorney and paid his fines in a repetitive process that earned him a reputation as a traitor among the white community but brought in an overflow of support from the black community. As a result of this popularity and the draw he possessed, Sputnik demanded that the Ellis Auditorium allow their black patrons to sit anywhere they liked or he would not perform for them. Needless to say, the Auditorium relented on its policy; the seats were filled and his shows were sold out.

Of course, Ellis Auditorium would rather have you remember its encouragement of African Americans in the entertainment industry over the past injustices of segregation and racism. During the 1920s and 30s, Victor Records used the auditorium to record such blues singers as Memphis Minnie, Tommy Johnson, Furry Lewis, and Sleepy Jones Estes. In 1956, at the same event where Elvis packed the house, a charity held by WDIA, the "Sensation Station of the Nation", also saw performers like B.B King, Ray Charles and Clara Ward help raise money for the Keel Avenue School for Handicapped Black. Like the greater majority of the Bible Belt, a great deal of their musical focus laid in the blues and gospel. These soulful sounds would later go on to inspire the raspy vocals and hard-hitting sounds of Rock n’ Roll.

During the 60s and 70s, Ellis Auditorium saw such acts as David Bowie, the glam rocker himself, and KISS before they'd fully amassed the army of fans they tout today. Bob Dylan and Jimi Hendrix also graced their stage in 1966 and 1969, followed by the likes of Elton John and The Who. They would continue to keep their doors open over the next few decades, despite falling victim to the ravages of time and the perils of faulty wiring. Eventually, it just became impossible for the stone building to keep up with the growing times, lacking the luster and shine of modernity and falling short of the new convention spaces springing up around it. In 1999, Ellis Auditorium was demolished and the chrome plated Cannon Center for Performing Arts was erected in its place.