The Eternal Light Flagstaff is a public monument in New York City’s Madison Square Park dedicated to American soldiers from New York that served in World War One. The flagstaff and granite pedestal was erected on the site that the returning soldiers were officially received in 1918 after their service overseas. The monument was dedicated on Armistice Day 1918, exactly five years after the end of the war. On the top of the flagpole is an illuminated star, lit at all times in remembrance of the American soldiers that gave their lives in the war. The base is inscribed with dedications to the soldiers and the names of major actions that American soldiers participated in in the First World War.

Photo of monument taken from inside the park 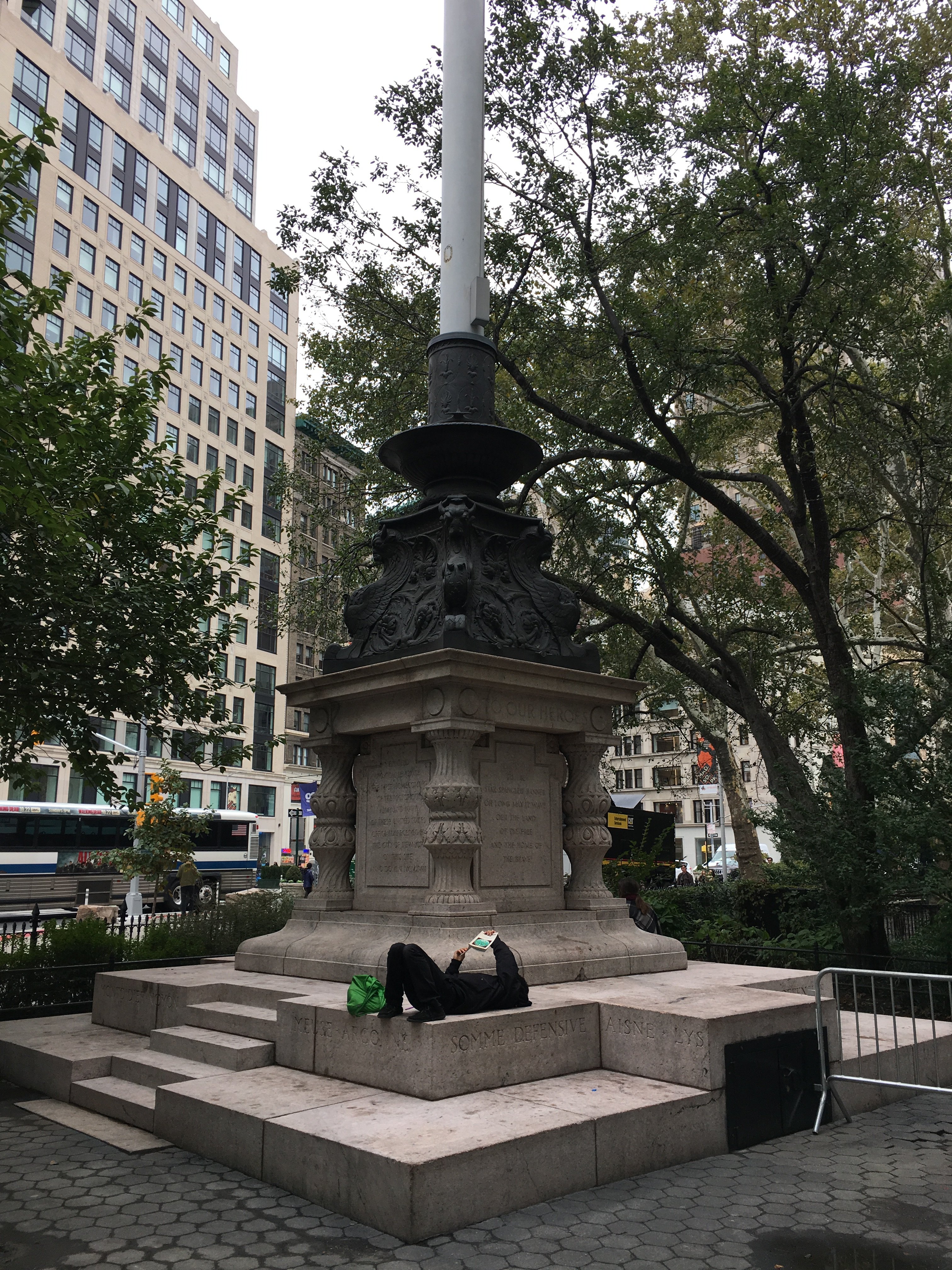 American troops returning from Europe after the war in 1918 were greeted with an official reception in Madison Square Park and the spot of the reception was chosen in 1923 as the spot for a memorial. The memorial was commissioned by Rodman Wanamaker, a wealthy New Yorker that was very involved in the war effort and the nation’s single largest purchaser of war bonds, for $25,000 (or roughly $365,000 as of 2017). The pedestal was designed by notable architect Thomas Hastings and the bronze base of the flagpole was designed by Paul Wayland Bartlett. The granite pedestal was completed and dedicated in 1923 and the bronze base and flagstaff were completed and installed in 1924.

The granite base of the memorial has many inscriptions on it. On the central columnn, each face has an inscription, as do the raised edges of the pedestal base. The east face of the columnn reads “TO OUR HEROES/ ‘TIS THE/ STAR SPANGLED BANNER/ OH LONG MAY IT WAVE/ OER THE LAND/ OF THE FREE/ AND THE HOME OF/ THE BRAVE”, the west face reads “AN ETERNAL LIGHT/ AN INSPIRATION/ AND A PROMISE OF/ ENDURING PEACE/ THIS STAR WAS LIGHTED/ NOVEMBER XI MCMXXIII”, the north face reads “IN MEMORY OF THOSE/ WHO HAVE MADE/ THE SUPREME SACRIFICE/ FOR THE TRIUMPH OF/ THE FREE PEOPLES/ OF THE WORLD” and the south face reads “ERECTED/ TO COMEMORATE/ THE FIRST HOMECOMING/ OF THE VICTORIOUS/ ARMY AND NAVY/ OF THESE UNITED STATES/ OFICIALLY RECEIVED BY/ THE CITY OF NEW YORK/ ON THIS SITE/ ANNO DOMINI MCMXVIII”. The bottom edges of the pedestal are inscribed with the names of major battles that American troops were involved in including Ypres, the Somme, Champagne-Marne, Cambrai, and the Meuse-Argonne Offensive.

The monument has played a role in New York life since it was erected. In 1927, national hero Charles Lindbergh made a stop during a parade celebrating his historic flight across the Atlantic Ocean to lay a wreath at the monument. The force of the crowds watching Lindbergh was so great that the police barriers broke and the police had to physically hold people back. The monument also serves as the starting point for the city’s annual Veterans’ Day Parade, an event that has been taking place since 1919 and is the largest such parade in the nation. One hour before the parade starts, a wreath is laid at the monument to commemorate those that served in the First World War and to honor those that died. As a prominent symbol in New York and a site that is memorialized on Veterans’ Day every year, not coincidentally the same day the flagstaff was dedicated, this monument continues to serve as an enduring reminder of the heroism and sacrifice of American soldiers in the First World War.