Harriet Tubman was a runaway slave, born in 1820. During the Civil War, she was one of the leading abolitionists in the Underground Railroad, saving more than 300 slaves. Originally from Maryland, she moved to Auburn, New York after the war where she published her biography and aided newly freed slaves in beginning their lives. The statue depicts Tubman with a bible in her left hand leading freed slaves. It is located in the South End of Boston and was created in 1999 by Fern Cunningham, a graduate from Boston University. Boston proudly commemorates both the Union and women with this statue. On the reverse side of the monument is a vertical slab that tracks the route that Tubman took when accompanying passengers on the Underground Railroad. 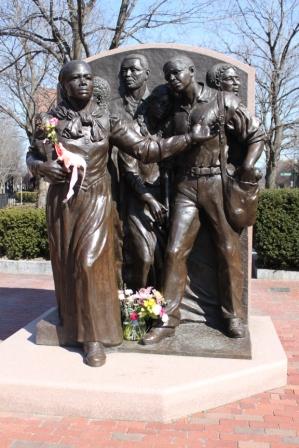 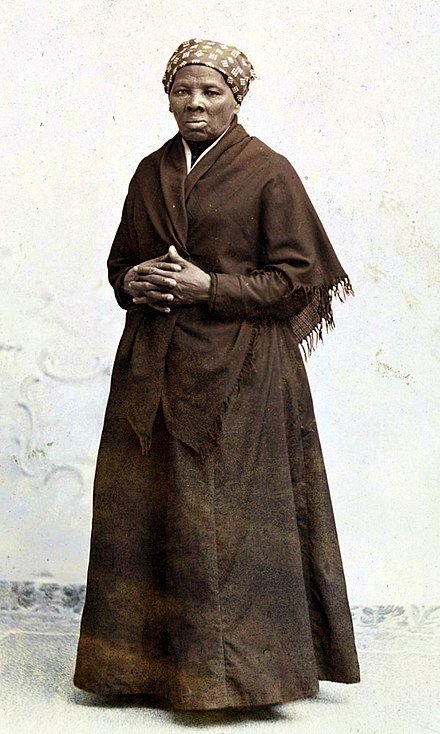 Harriet Tubman,  born as a slave in 1820 in Dorchester County, Maryland became a symbol for women and human rights in the fight for Civil Rights in the United States. She is most remembered for her appearance at the opening of the National Association of Colored Women in 1896 in Washington, D.C. where Tubman was the oldest member of this association.1

Her name at birth was Araminta “Minty” Ross. Tubman fled slavery in 1849 and made it her mission to help others. Tubman believed it was her faith that guided her through life and gave her the courage to save so many slaves. Tubman became one of the most active members of the Underground Railroad, rescuing over 300 slaves.2 Furthermore, in just a short lapse of ten years, Tubman made 19 trips into the South.

Tubman's passion for helping others started in her earliest years fo life. When she was in her early teens, she blocked a doorway to protect another fellow slave from a furious master. After the master discovered Tubman blocking his passage, he threw a two-pound weight which hit Tubman in the head. Sadly, she never fully recovered from the head trauma. She suffered from various side effects from the trauma, including hallucinations and sleeping spells which lasted through her entire life.1

Harriet Tubman married her husband, John Tubman, a free laborer at the estate where she was enslaved, in 1844. Five years later, Tubman managed to escape slavery with the help of a white woman. After various days of struggle, she finally made it to Philadelphia, where she found work and managed to save up some money. Tubman, then returned to Maryland in 1857 to rescue her sister and her sister’s children from slavery.3 When she went back to the South to save her brothers, she sadly found that her husband had found another wife.

At the end of the Civil War, Tubman nursed the sick and wounded black soldiers and Union soldiers in Florida and the Carolinas for three years after the end of the war. After she completed her work taking care of wounded soldiers, she moved to Auburn, New York, to help Blacks pave their way to freedom and a good life. She financed herself by selling copies of her biography as well as giving speeches throughout the United States. She is most remembered for her appearance at the opening of the National Association of Colored Women in 1896 in Washington, D.C. Tubman was the oldest member of this association.3

Tubman never lived in Boston, but she had ties to many abolitionist friends who lived there. Fern Cunningham created the statue in 1999, and its installation was marked by a citywide celebration. The whole park that it is located in is dedicated to Tubman. Fern Cunningham wanted the statue to capture Tubman’s unique spirit.4

Boston proudly commemorates both the Union and women with this statue. On the reverse side of the monument is a vertical slab that tracks the route that Tubman took when accompanying passengers on the Underground Railroad. There is also a quote from Tubman on the memorial that reads,  "There are two things I've got a right to, and these are death or liberty. One or another I mean to have. No one will take me back alive.”4

The next quote on the slab belongs to Frederick Douglass, who as well as Tubman, was a runaway slave. Frederick wrote an autobiography in the early 1800s about the cruelty and abuse he faced as a slave. He became another significant icon in the abolitionist movement. The quote from Douglass reads, “The midnight sky and the silent stars have been the witnesses of [Tubman's] devotion to freedom and of [her] heroism.”3

Nonetheless, the last quote in this memorial belongs to Sarah Bradford, the author of the first Tubman biography. Bradford also included various stories of Douglass into the biography in order to provide the book with more of a purpose than just the narration of life struggles of Tubman and instead made it more of an advocacy piece. Bradford’s quote reads, “She expected deliverance when she prayed unless the Lord had ordered otherwise.”

The creator of the monument, Fern Cunningham, included these phrases because she made it her mission to ensure that the black experience had a powerful presence in the city of Boston. Cunningham, a colored woman herself, who studied at Boston University and who sought more recognition for the black community's past and impact in Boston.2 The memorial was standing powerfully as a symbol for the liberated and not just the liberator as well as representing strong women leaders who have shaped the history of Boston, and the United States.