Loretta Lynn's HomePlace in Butcher Hollow is located in the small Eastern Kentucky community of Van Lear. Here, fans can tour the cabin that Loretta Lynn was raised in, and where her sister, singer Crystal Gayle, spent the first few years of her life. Original furnishings remain in the house and some of Lynn's family members provide tours of the cabin, sharing personal stories of the country music icon. Lynn's childhood in Butcher Holler, growing up with her coal miner father and hard-working mother, inspired her most famous song, "Coal Miner's Daughter." 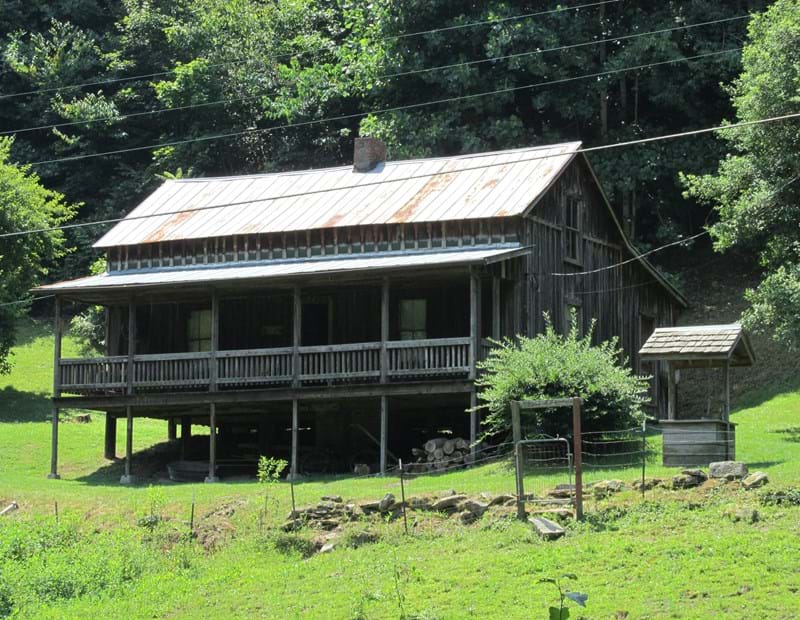 Historic Photograph of the Cabin in Butcher Holler 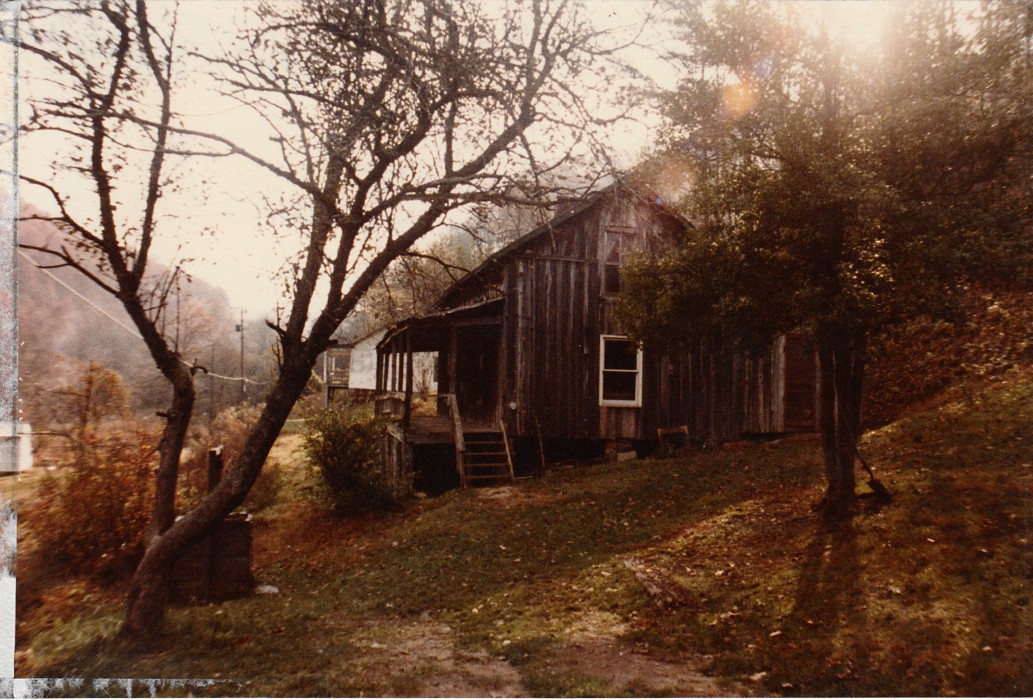 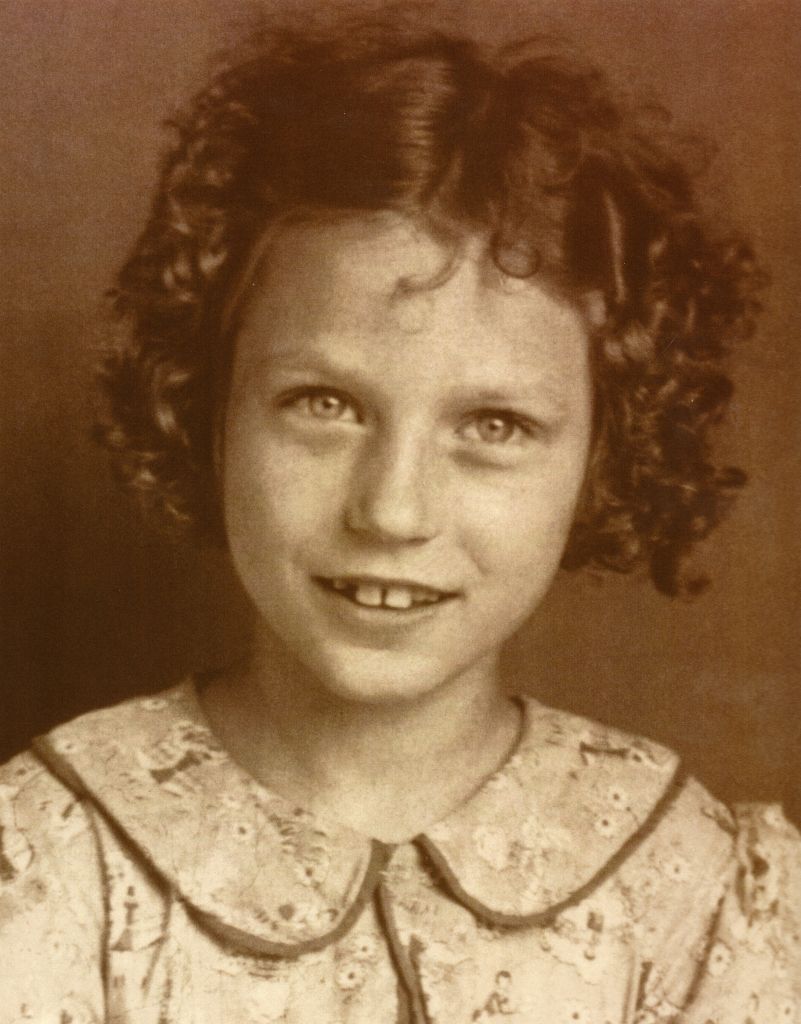 Loretta Lynn on the Front Porch of Her Old HomePlace, 2015 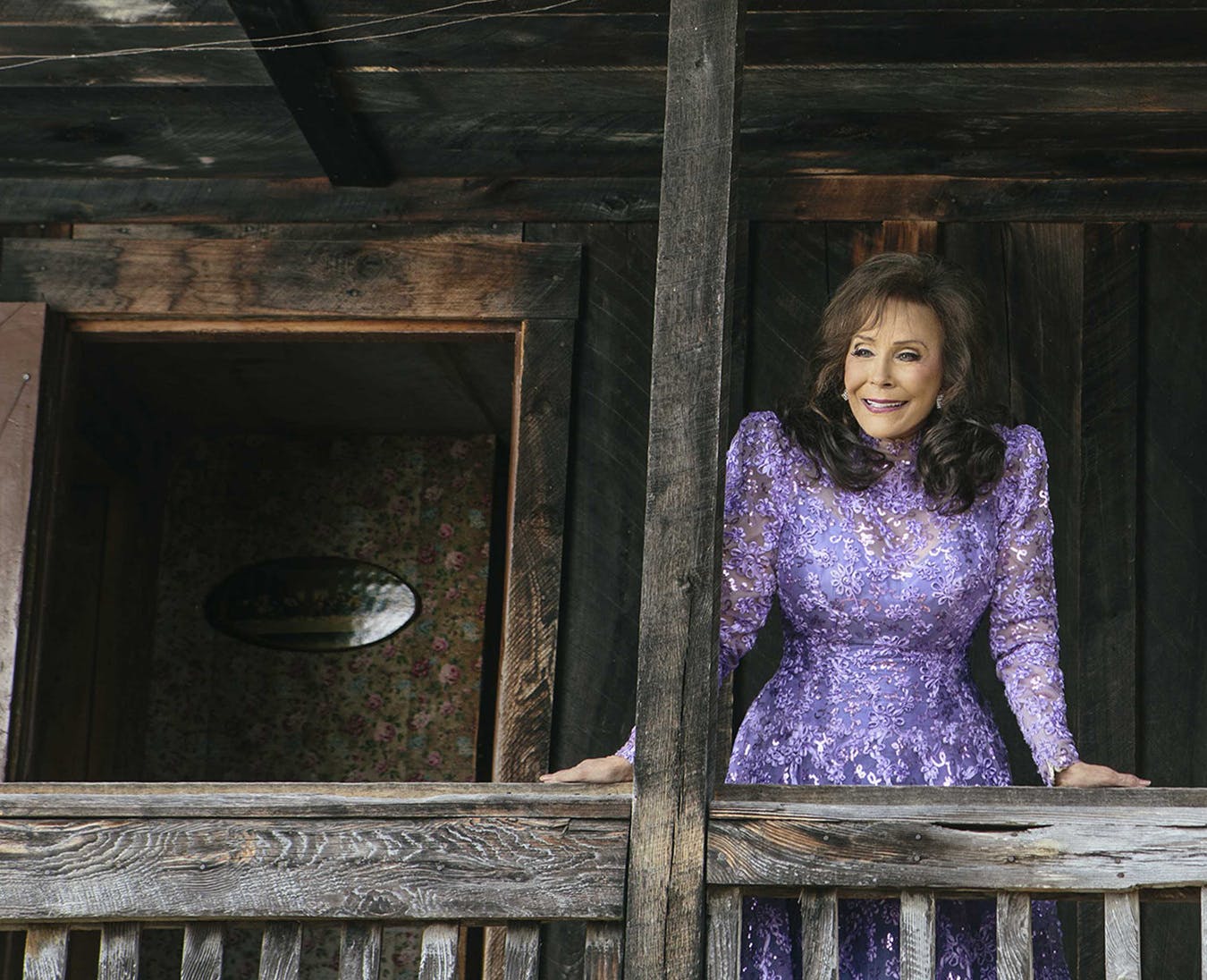 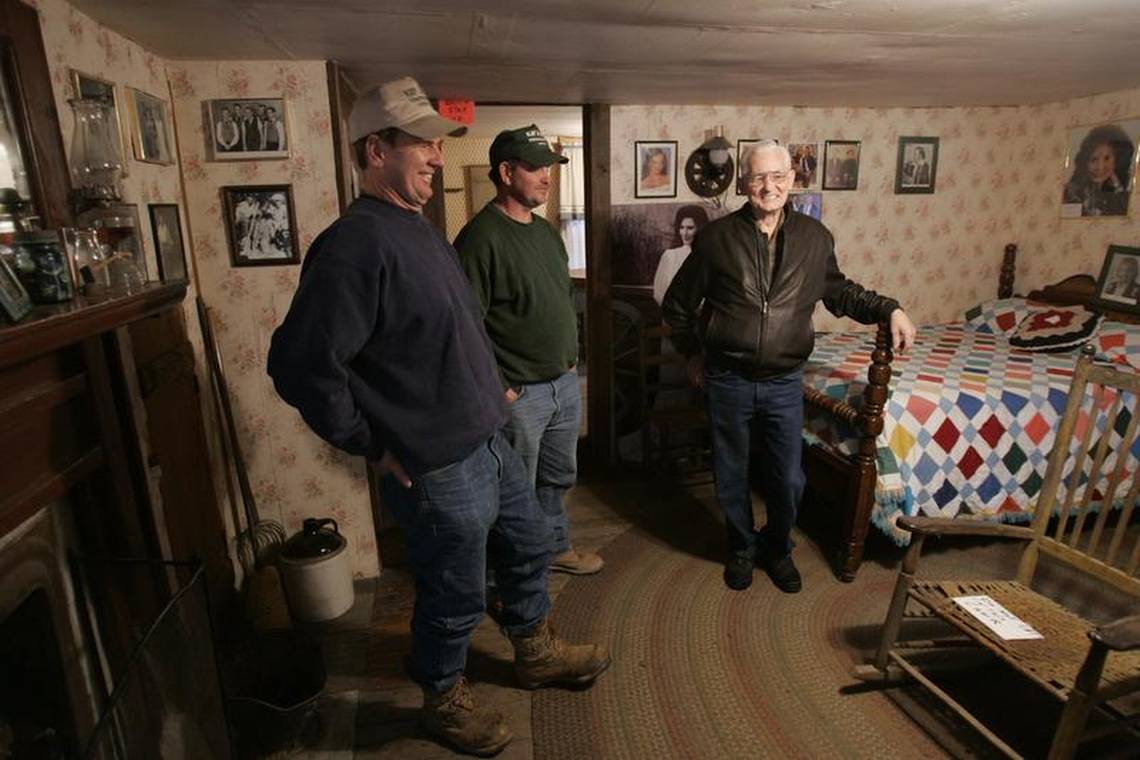 Photographs of Family and Friends Adorn the Cabin 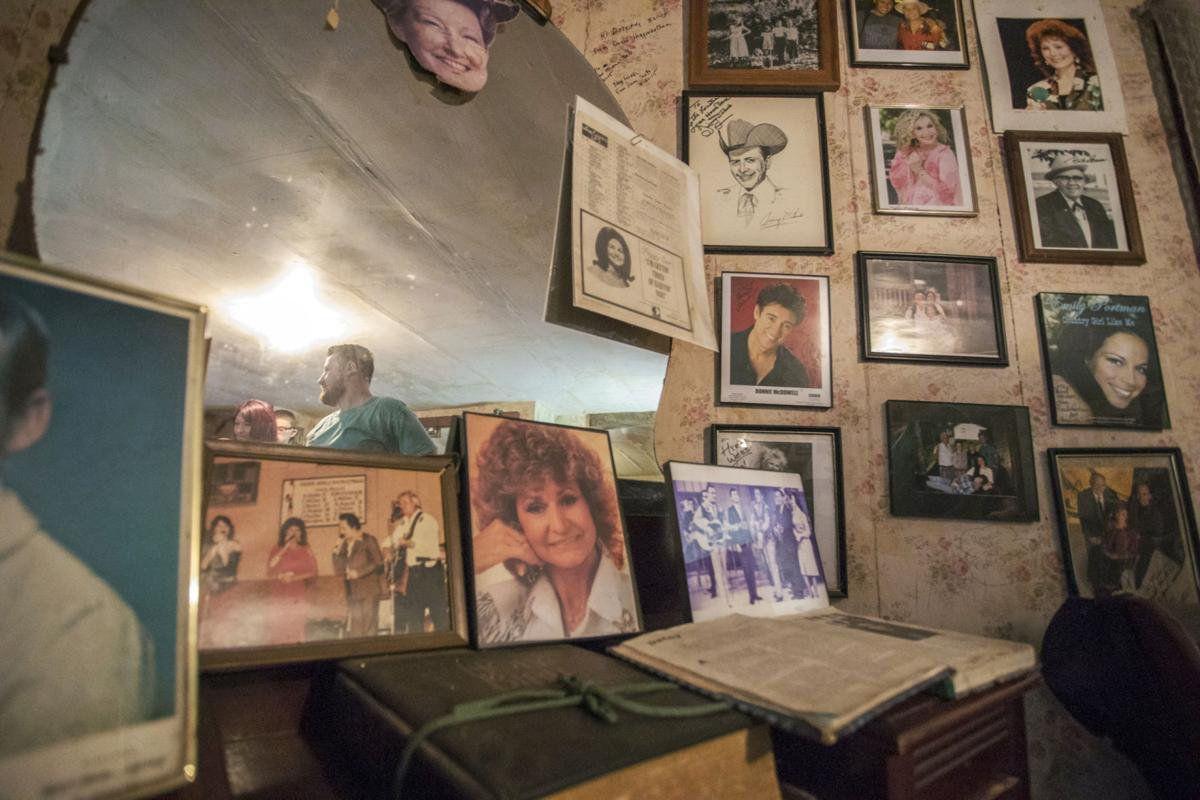 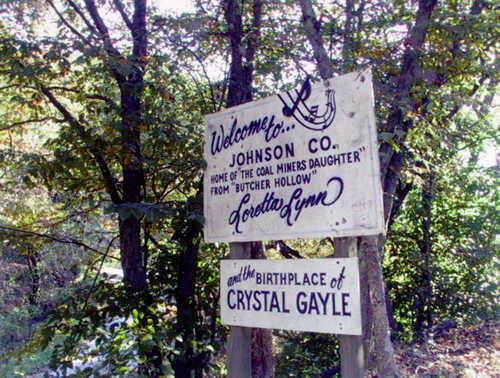 A Replica of the Cabin in Hurricane Mills, Tennessee 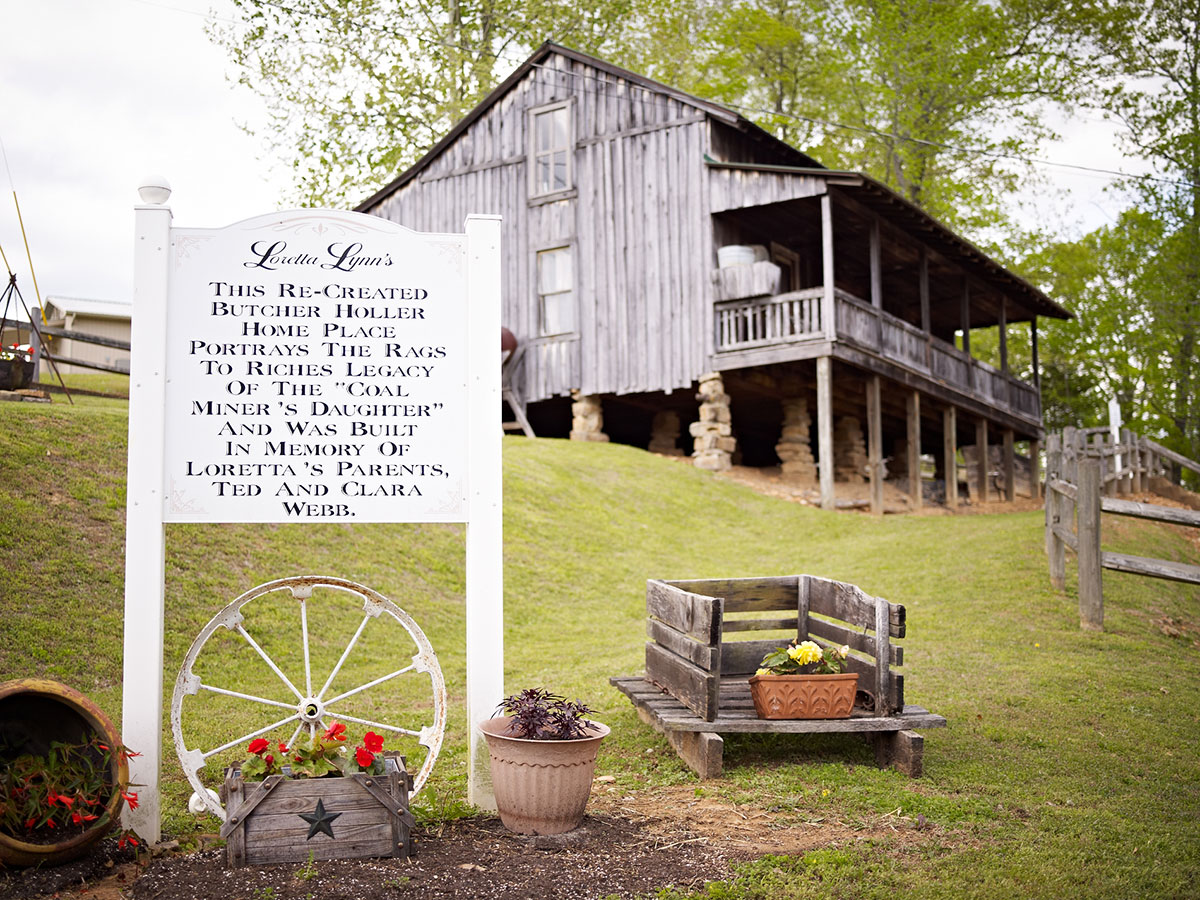 Loretta with Five of Her Siblings, From Left to Right: Betty, Peggy, Herman, Loretta, Donald, and Crystal 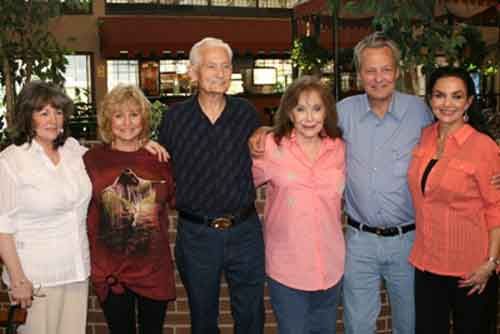 Butcher Hollow (or Holler) is what remains of a once thriving coal mining community in Johnson County, located in Eastern Kentucky. It is most known for being the childhood home of country music icon Loretta Lynn, and the birthplace of her sister Crystal Gayle. Loretta Lynn's most memorable song "Coal Miner's Daughter" is about her childhood in Butcher Holler, where she grew up poor but in a large family full of love. Her father, Melvyn "Ted" Webb, worked for the Consolidation Coal Company in Van Lear. Ted and his wife Clara Ramey Webb raised eight children in their small cabin in Butcher Holler, including Loretta, who was the second child and oldest daughter. The youngest child in the Webb family, Brenda (later to become Crystal Gayle), was born in Paintsville, but the family moved to Indiana when she was 4. As a child, Loretta loved singing in church and to her young siblings on the front porch swing, but her happy childhood came to an end when she married Oliver (Mooney) V. Lynn, Jr. at the age of 15. Soon after, Loretta and Mooney relocated to Washington state, where she had four children in quick succession. Mooney noticed a unique talent in Loretta when she sang their children to sleep at night, and in the late 1950s, the struggling housewife began performing in local venues. Her career took off in 1960 when her song "I'm A Honky Tonk Girl" became a hit. The Lynn family then moved to Tennessee and Loretta signed a contract with Decca Records.

Loretta Lynn has contributed much more to the country music industry than just providing good songs. She ushered in a new image for female artists by writing about the struggles of women, covering topics from cheating husbands to birth control pills. In 1970 Loretta released her most well-known song "Coal Miner's Daughter," inspired by her early life in that cabin in Butcher Holler. The song instantly hit Number 1, and Lynn later released a bestselling book by the same title. In 1980, the movie Coal Miner's Daughter starring Sissy Spacek was released, earning Spacek an Oscar. Loretta's youngest sister Crystal Gayle also went on to have a successful career in the music industry, releasing hits such as "Don't It Make My Brown Eyes Blue" and "Talking In Your Sleep."

Loretta Lynn's HomePlace in Butcher Holler is now seen as a beacon in Van Lear. Fans of Loretta and her sister Crystal travel from all over the world to make the trek up to Butcher Holler to experience for themselves the place that inspired Lynn's hit song. For more than 30 years, Loretta's younger brother Herman Webb provided tours of the cabin, regaling visitors with stories about his parents and growing up with Loretta and Crystal. Since his death, his children and grandchildren have continued providing tours, still relaying the same stories. Inside the cabin, visitors will see tons of Loretta Lynn memorabilia, original pieces of furniture, and the washboard Loretta's mother Clara would use to wash clothes on. After a tour, visitors can stop off at Webb's General Store, once a coal mining camp store. Loretta Lynn returned to Butcher Holler in 2015, where she was photographed for the cover of her 2016 album, "Full Circle."Loretta Lynn's HomePlace is a must-see for any fan of country music and the "coal miner's daughter."