The Toledo Museum of Art, which was founded in 1901 and opened at its present location in 1912, is considered one of the top fifteen art museums in the United States. The museum boasts pieces from ancient Egypt, Greece, and Rome, works by classic artists such as El Greco and Rembrandt, and modern art by the likes of Matisse and Picasso. The Georgia and David K. Welles Sculpture Garden was added in 2001, expanding the museum’s property, and the Glass Pavilion was inaugurated five years later. Today, the Toledo Museum of Art continues its tradition of exhibiting art to the public free of charge.

The Toledo Museum of Art holds one of the finest art collections in the country.

The Glass Pavilion, designed by Tokyo-based SANAA, is an architectural wonder whose interior and exterior walls are made of curved glass panels. 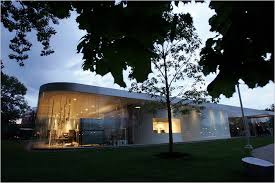 Businessman Edward Libbey and his wife Florence Scott Libbey founded the Toledo Museum of art in 1901. At its inception, the museum consisted of only two paintings and a mummified cat. It resided in a couple of rented rooms in the Gardner Building. In 1903, the museum moved into its second home on Madison Avenue and hired its first director, local artist and writer George Stevens. His wife, Nina Spalding Stevens, who had experience with the School of Applied Design for Women and the Art Students League in New York, became assistant director. Not until 1912 did the Toledo Museum of Art move into its iconic, Greek-style building on Monroe Street.

Over the years, the museum has grown thanks to donations from art collectors and other additions. In 1931, a peristyle auditorium was built for musical performances, including performances by the Toledo Symphony. The Georgia and David K. Welles Sculpture Garden opened in 2001. The museum has also remembered its founder, Edward Libbey, of the Libbey glass company. In 1962, the Studio Glass Movement began after the museum proved that glass work could be accomplished in a studio setting. In 2006, the Glass Pavilion opened its exhibitions of glass artwork, glassmaking facilities, and meeting spaces.