The Bluegrass Railroad Museum was founded in 1976. Today, the retired portion of the railway consists of the famous Youngstown High Bridge - a spot favored by thrill seekers and base-jumping enthusiasts. The part of the rail line that remains in service offers a beautiful scenic train ride through the surrounding farms creating a relaxing experience for all to enjoy! As your ride nears its end, feel free to take advantage of the quick stop and visit the Wild Turkey Distillery! Aside from the history of the railway, the museum exposes you to various vital parts of genuine Kentucky culture.

New location sign at the restored station of the Bluegrass Scenic Railroad and Museum. 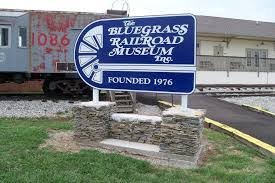 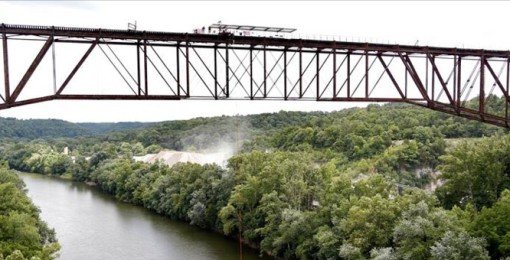 Founded in 1976, the Bluegrass Railroad Museum is composed of several exhibits including its staple piece of track running a total of 5.5 miles from the county park to the Kentucky River. This track was originally laid by Louisville Southern Railroad in 1889. The construction included Young's High Bridge at Tyrone KY – another staple of the scenic train ride that has never been modified or strengthened. Along with the historical track, several pieces of bluegrass railroad history, including the trains themselves, aid in making history a wild ride yet again.

The Kentucky railway system has a rich history through the grass root areas surrounding the museum. The railways played in important part in the extraction of limestone from the nearby deposits that would eventually be integrated into the scene tour. In addition to that, the supply lines of the rail system proved highly beneficial to the early corn and soy farms in the area - truly a rail system with as much history as Kentucky itself.

The Bluegrass Railroad Museum owns track between Versailles to Tyrone and advertises weekend train rides during the summer months over a portion of the track between Versailles and Milner. The museum eventually restored the remaining 2 miles of track to Tyrone so visitors could ride the train and see Young’s High Bridge – a massive structure that stands over 268 feet high and over 1,600 feet long. Also, along the route were the spots of several notorious railway stories that the museum carries as a part of its area’s history.

Today, the shape of the train ride has changed drastically from the original plan. The line from the Kentucky River to Lawrenceburg, Kentucky has since been abandoned and sold to a scrapyard in 2009. The rails on Young's High Bridge were quickly removed and sold for scrap as well. Young's High Bridge itself, however, has been bought by a private company who has formed an LLC to develop the area into a tourist attraction known for its thrilling height.

As for the museum itself, it has moved from the original 1976 location to a spot right outside of Versailles, Kentucky where it remains open today. Originally, this location featured a quaint house capable of housing the museum. However, after a fire in 2006, the remains of the house were remodeled into the functional museum and station seen today. The museum continues to draw thousands of tourists and railway enthusiasts every year – each one leaving with a rich history of the Bluegrass Railways and its impact on the surrounding communities.

Hours Are Subject to Change For Seasonal Accommodation.