In 1955, a skeleton was discovered in a gravel pit near Turin, Iowa. Experts first proposed that these remains were about 10,000 years old, going back to the "early people" of the ice age era. As archaeologists continued to excavate, they found in succession three more human skeletons. After months of rigorous reconstruction of the remains and scientific testing, experts concluded that the skeletons were likely a family unit about 6,000 years old. The site provided evidence of prehistoric burial practices with many similarities to ancient burials found throughout the eastern United States. The skeletons found here in Turin were the oldest human remains discovered in the state until August of 2011, when archaeologists excavated a 7,000 year old village in Des Moines. 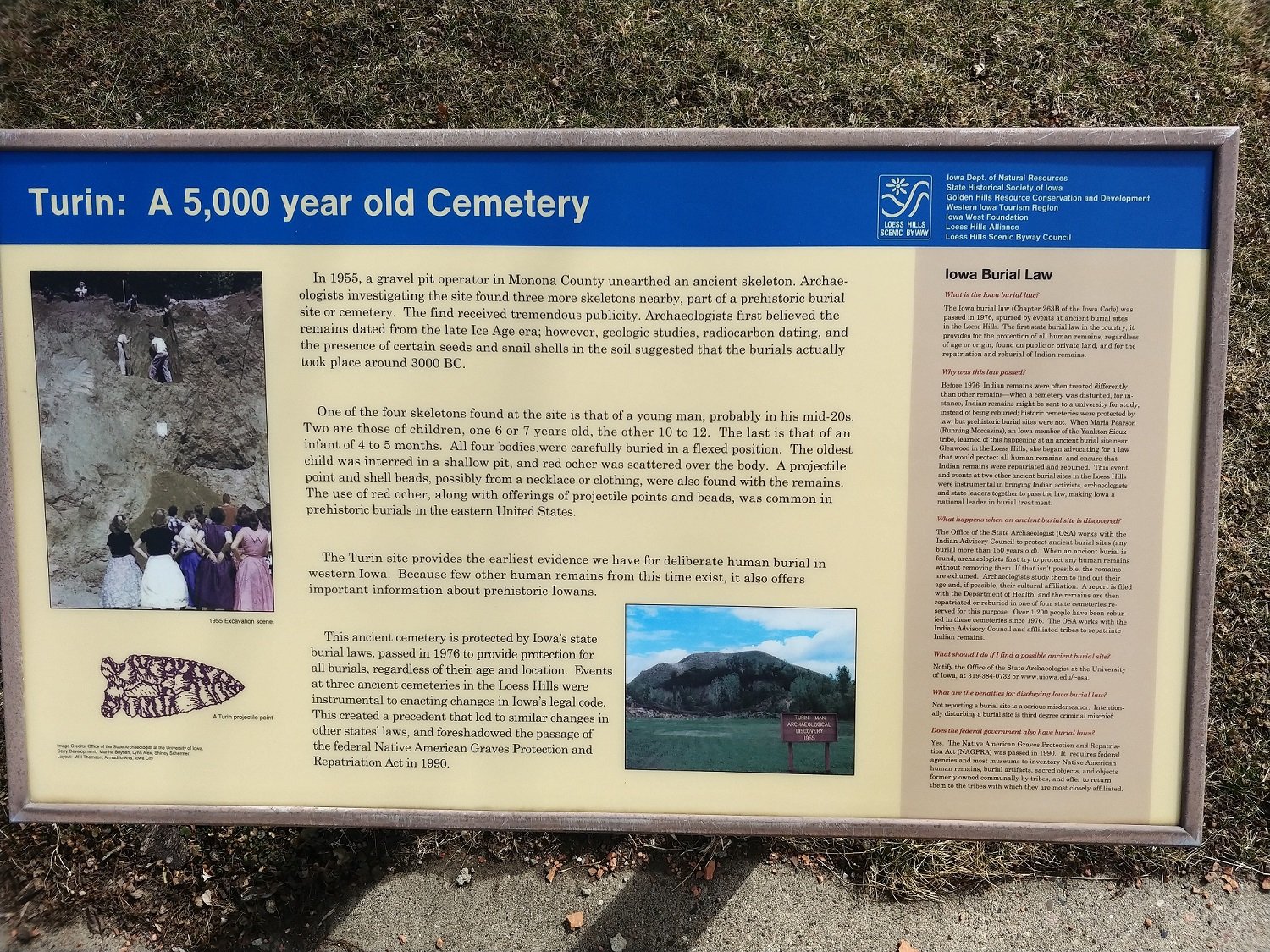 It should be noted here that each source I consulted had variations of how the remains were first discovered and by whom.  I have compiled and presented what I consider are the most relevant details.

In 1955, a gravel pit operator (Asa Johnston) discovered human remains on his property in Turin, Iowa.[1, 2]  Upon finding more human bones, Johnston alerted Monona county sheriff Don Muir and the county coroner, S. N. Anderson.[2]  The bones were then taken to the coroner’s home in nearby Onawa, to be cleaned and pieced together.[2]  Within a few days, experts from the University of Iowa and the Sanford Museum were consulted and taken to the discovery site.[1]  The discovery attracted regional attention to a small town, and even got its moment in the spotlight as photographers from Life magazine came to document the lively excavation.[1, 3]  During this time excavators found three more skeletons: an adolescent, a toddler, and an infant, totaling an incredible four complete skeletons unearthed at the site.[4]

Radiocarbon dating tests accompanied by further biological and geological inquiries confirmed those doubts.  These tests proved that the skeletons found were only about 5,000-6,000 years old, during what was known as the Middle Archaic period.[1, 4]  (More information about the Middle Archaic period can be found in the links section).  Though not as old as scientists had originally estimated, the discovery of four intact skeletal remains in an undisturbed burial site provided invaluable information about North America’s ancient peoples and their customs.  The Turin Man Archaeological Site is still one of the oldest sites of human remains ever found in Iowa.[1, 4]  This archaeological discovery along with others were key elements to passing the state's burial laws in 1976 and eventually the creation of the federal Native American Graves Protection and Repatriation Act in 1990.[4]