Since 1907, lighting a huge bonfire has been a long-standing tradition at Texas A&M University. Students annually prepare for the bonfire months in advance by gathering wood and timber. This tradition symbolizes the love all Aggies have for Texas A&M and their “burning desire” to defeat the University of Texas at football. The bonfire’s tradition was altered after the bonfire stack collapsed on November 18, 1999 at 2:42 am. The collapse killed 12 students and injured 27 others. This loss greatly impacted past, current, and future Aggies. Within five years, a large and symbolic memorial was built to commemorate the lives of those Aggies that were taken and injured.

This is the Spirit Ring that consists of the 12 portals dedicated to the deceased students. The portals point in the direction of the students' home towns. The 27 bronze plaques to honor the injured are in between these portals. 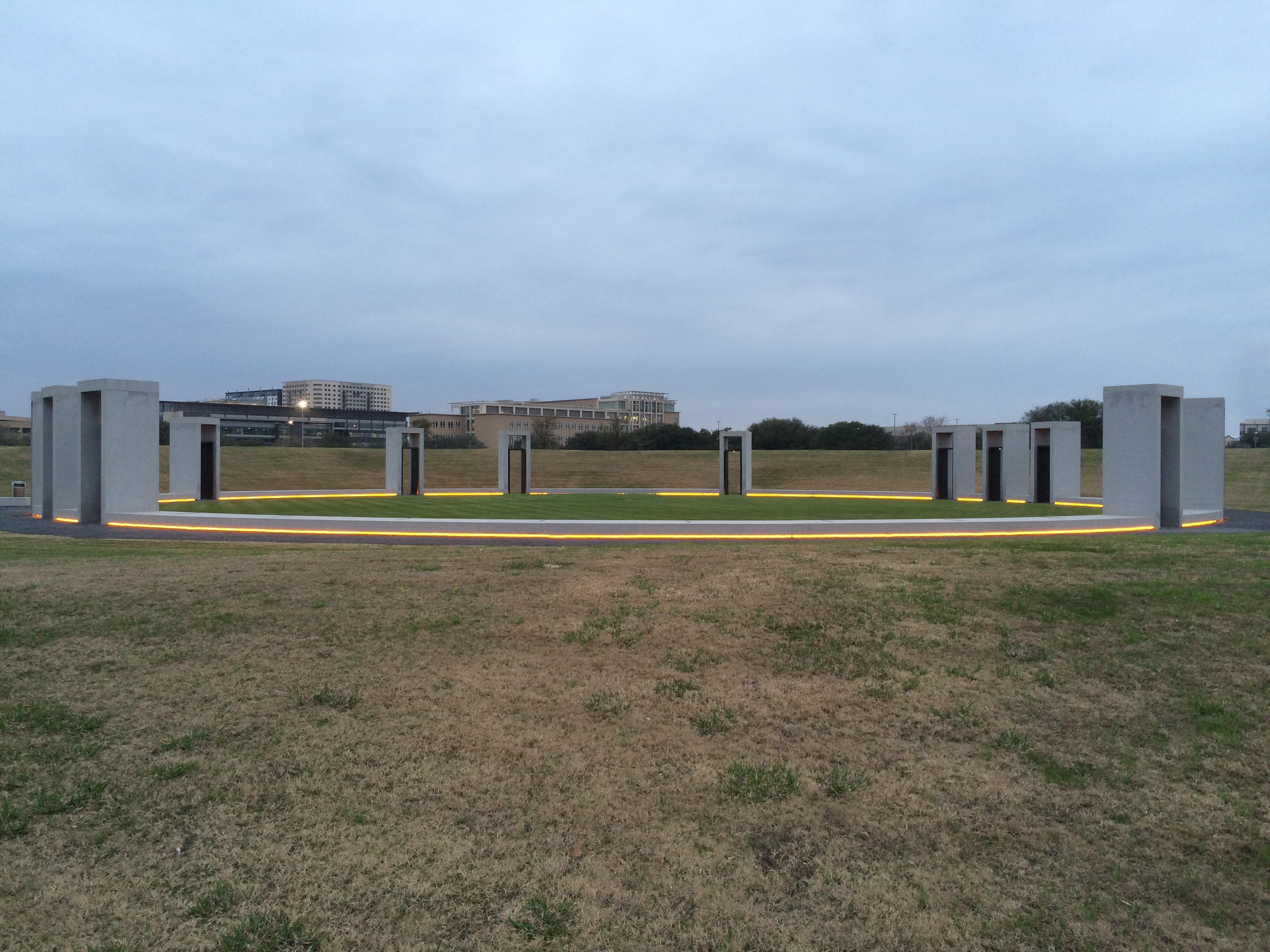 Each light in the indent in the marble on the right signifies every year the bonfire was lit, with the exception of 1963 when John F. Kennedy was assassinated. 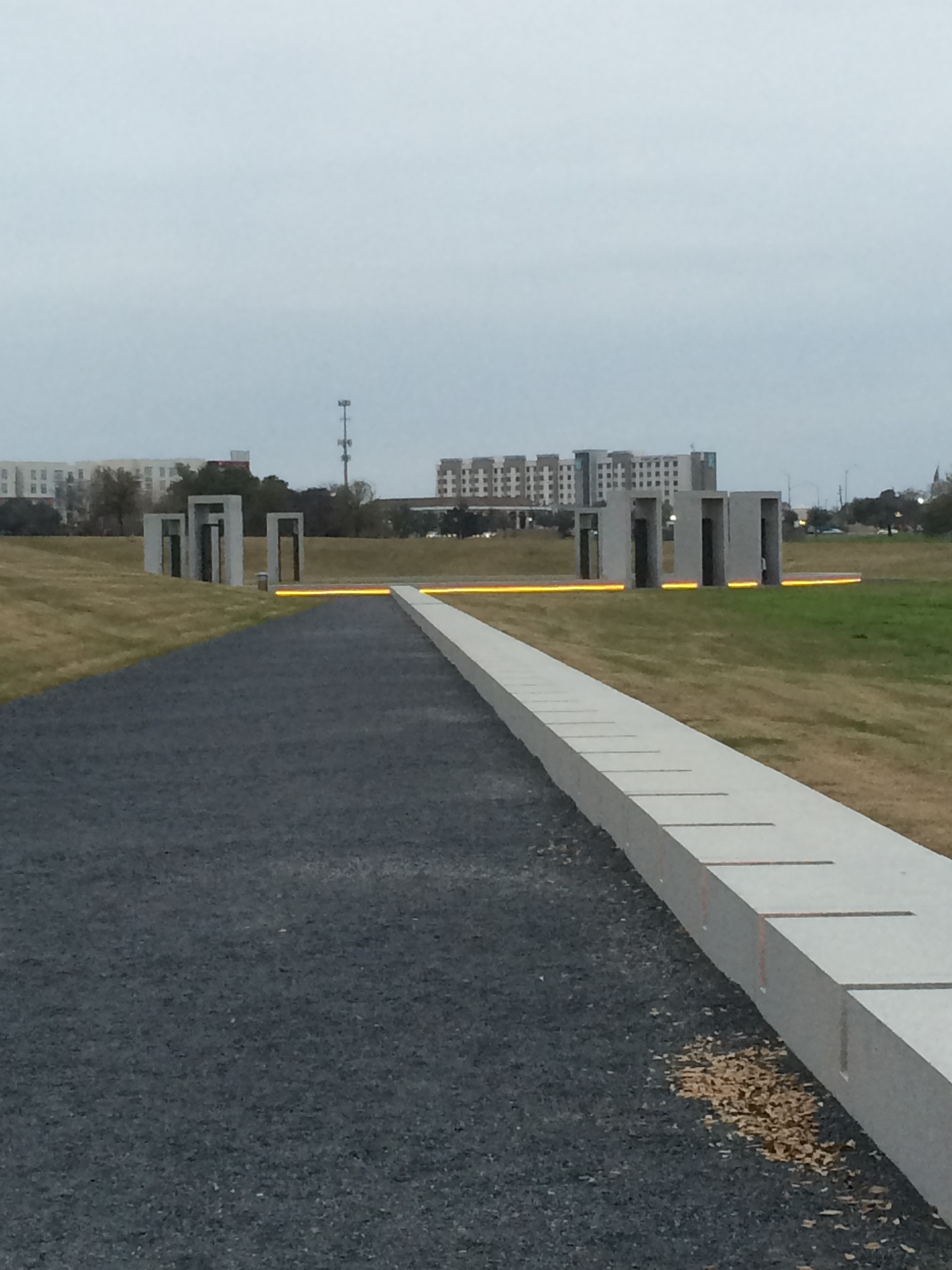 This is just one of the portraits inside the 12 portals dedicated for each student who passed. This is Timothy Doran Kerlee Jr.'s portal, the last student to pass. 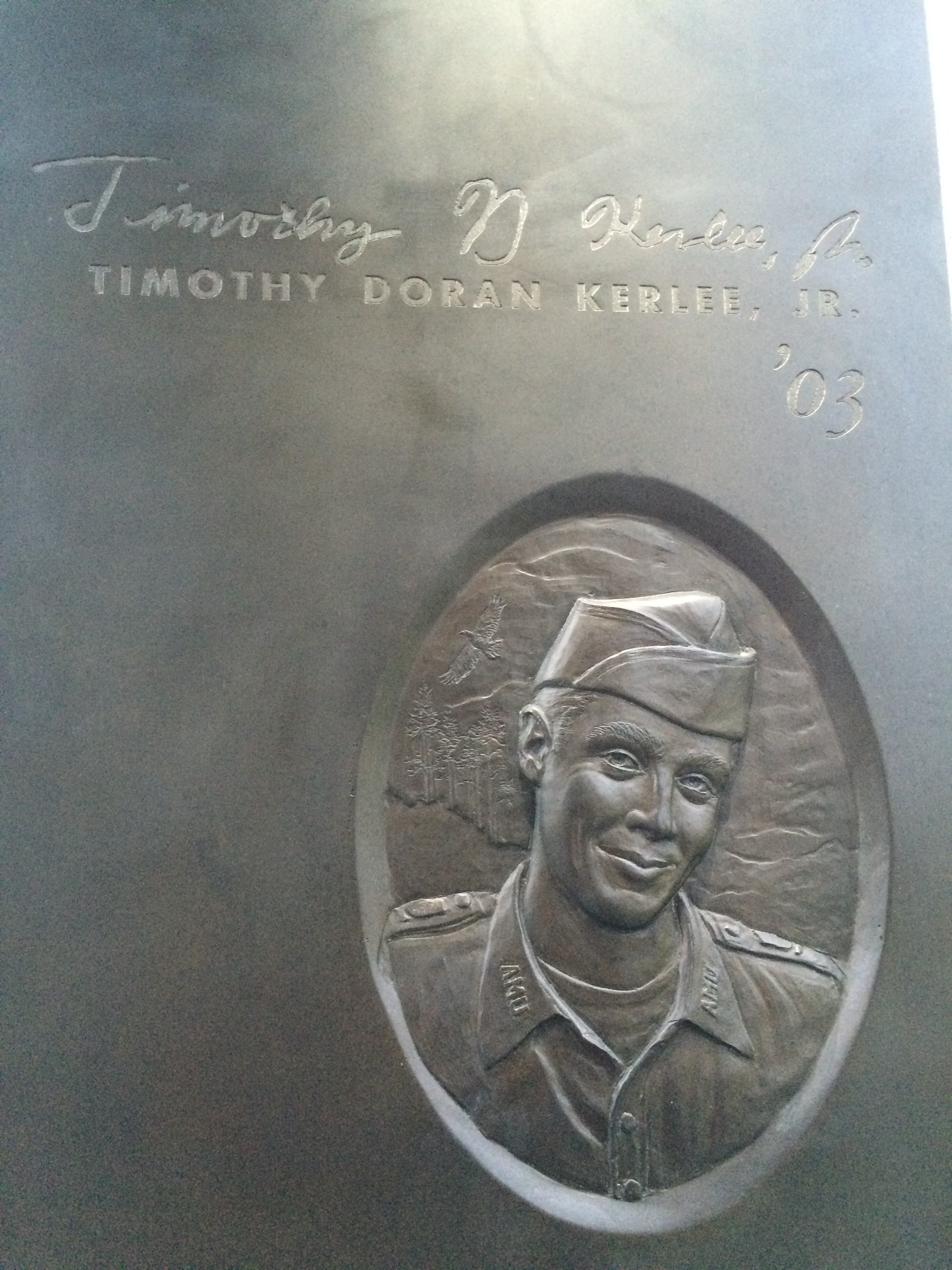 This is what the right wall of the portal looks like. The portals include a portrait of the deceased student and quotes from their friends and family. 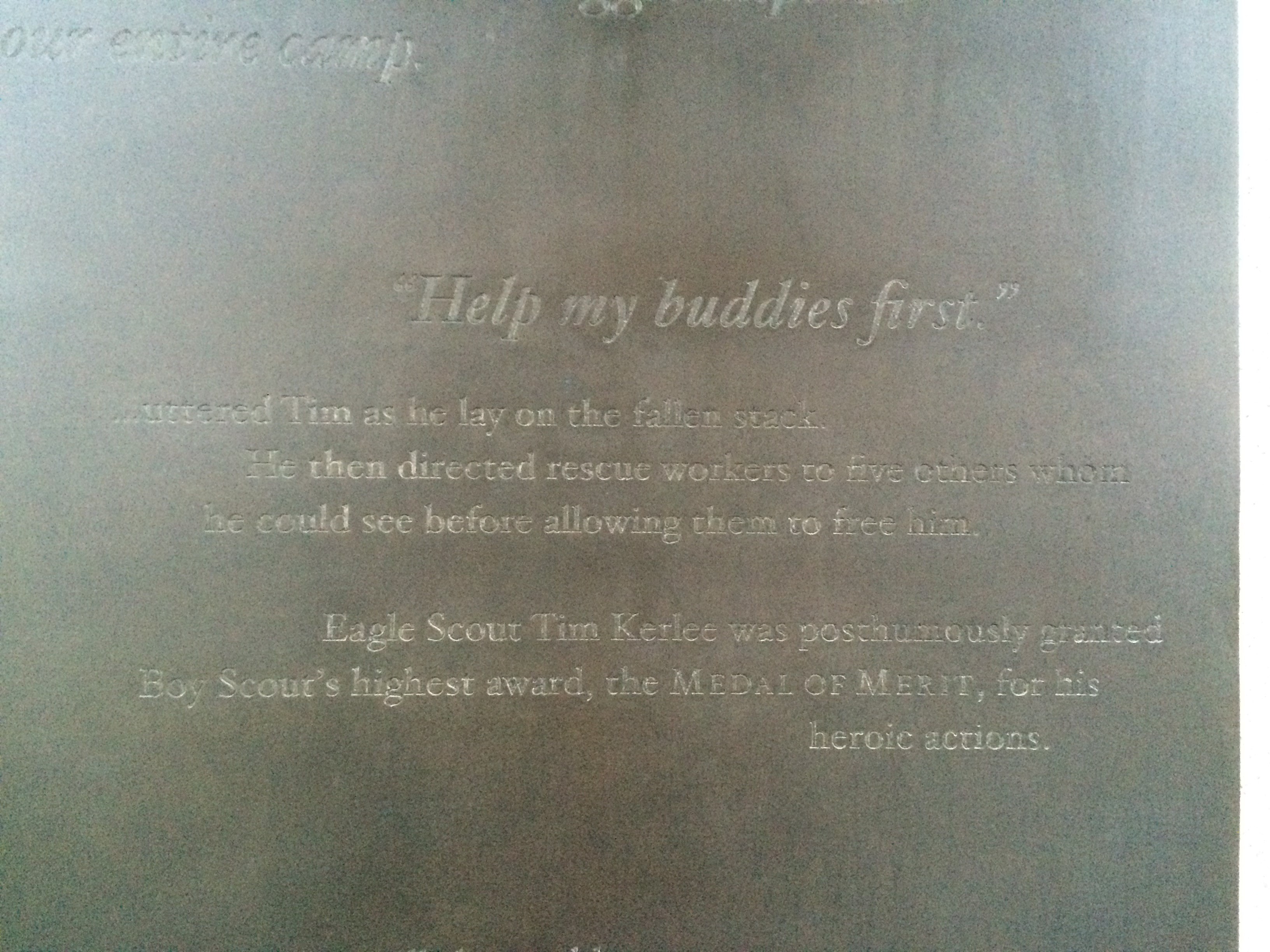 Here is another example of what is included inside the walls of the portals. 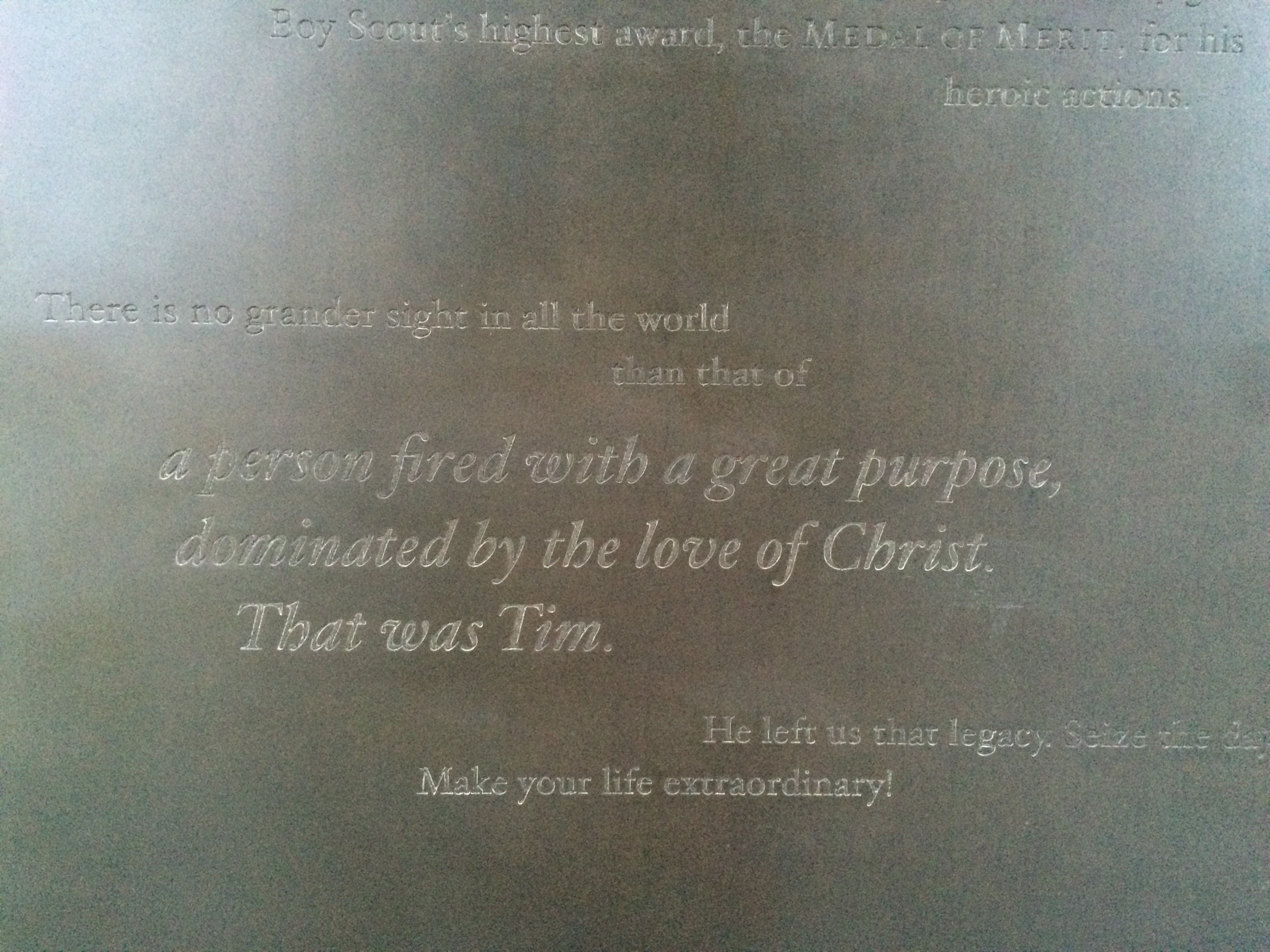 The Aggie bonfire is one of the most respected and well-known traditions of Texas A&M University. It started in 1907 as an unimpressive pile of wood and scraps but evolved into one of the largest organized bonfires in the world. This impressive feat was accomplished by months of preparation, teamwork, organization, and commitment. Students would go out and cut wood every weekend, typically starting in September, to prepare for the bonfire to be lit on November 18th. There are certain leadership positions and vernacular used to effectively achieve the goal, while still taking safety precautions. All participants must wear protective head gear, and leaders are indicated by the color pot they wear.1 Students wearing red pots are in charge of maintaining a safe environment and organizing the project as a whole. Students wearing brown pots are in charge of using heavy equipment such as chainsaws. There were traditionally 9 seniors and 9 juniors with red pots, but since the bonfire stack has grown each year, the need for more leaders has increased the numbers of students with red and brown pots.

The bonfire was lit each year since 1907, and in 1935 the lighting of the bonfire became a university sponsored event. Starting in 1936, the students were provided with the necessary tools and transportation by the university, and were even assisted in locating dead trees to cut down.2 This symbolized the university officially adopting Aggie Bonfire as a cherished tradition. The way the bonfire was stacked eventually became standardized instead of improvised. A stacking technique that resembled a Native American tipi was established.3 This design allowed the bonfire stack to grow in height. The bonfire stack was originally just a few feet in height, never exceeding more than 15 feet, but the new design allowed the stack to grow upwards to almost 100 feet. However, the stack was soon limited to around 50 feet in height as a safety precaution.

This height limit was a wise decision considering the tragedy that occurred during the stacking of the bonfire in 1999. On November 18th, students were constructing the bonfire by stacking the logs to form the tipi shape. At 2:42 am the bonfire stack collapsed during construction, killing 12 students, and injuring 27 others. Over 24 hours were spent trying to pry the students out from underneath the heavy logs.

The next night a memorial was held in Reed Arena and thousands of Aggies gathered to honor their brothers and sisters that had past.4 As an Aggie, each student feels a deep connection with one another, even if they have not met, a characteristic that makes Texas A&M different from other universities. Due to this deep connection among the student body, past, present, and future Aggies are still haunted by this tragedy. As a result, the University decided that it could no longer sponsor the Bonfire tradition, but it is still lit each year off campus and without the university’s aid.

Timothy Doran Kerlee Jr, the last student to die, was a freshman in the Corps of Cadets (Squadron 16). He urged the first responders to help save the other students first because he claimed his injuries weren’t life threatening. He told the rescue workers to, “Help my buddies first.”  Timothy had substantial injuries, his internal organs were punctured, and he had multiple broken bones. He would only live for a couple more hours once he was removed from the rubble. He died in the hospital on November 19th. He was the 12th man to die, and he died honoring the principles that Aggies live by; excellence, integrity, leadership, loyalty, respect, and especially selfless service.5

Within five years of the tragedy, a symbolic memorial was built at the location of where the bonfire stack collapsed. The Bonfire Memorial is located near the intersection of Texas Avenue and New Main Drive on the Texas A&M campus. The Bonfire Memorial has multiple parts. There is an inscription at the entrance that reads, “There’s a spirit can ne’er be told,” which symbolizes that the Aggie spirit is strong and especially powerful at this location. On the walkway leading up to the Spirit Ring, there is a long granite strip with a space carved out for a light. Each light symbolizes every year that the bonfire was lit from 1907 until 1999, the only exception was in 1963 the bonfire was not lit in order to honor President John F. Kennedy who had just been assassinated. The Bonfire Memorial is centered around the Spirit Ring.

The Spirit Ring has 12 portals, one for each student who passed. In between the portals are 27 blank bronze plaques, that symbolize the Aggies who were injured during the collapse. Those who were injured insisted on leaving the bronze plaques blank because they considered their sacrifice insignificant compared to the Aggies whose lives were lost. The portals are 12 feet tall, symbolic to the Aggie tradition of being a 12th Man. Each portal is dedicated to a specific person, and points in the direction of their home town. Stepping inside the portal is symbolic to stepping inside the spirit of that person’s life. Each portal has a portrait of the person whose life was taken, and features quotes directly from the deceased student, or quotes from their family. The portals are meant to serve as a celebration of their lives, rather than a mourning of their death.

Every year on November 18th, at 2:42 am, thousands of students gather at the Bonfire Memorial to commemorate the lives of those Aggies that were taken on that tragic night. A few speeches are made and it is overall a solemn time dedicated to mourning the loss of fellow Aggies. The families of the deceased students still come to the ceremony, even though their sons and daughters were lost almost 20 years ago. The impact this tragic event had on the Texas A&M campus and student body is still evident 19 years later.

1) Slang term used to refer to military style headgear worn to protect participants from falling debris. The headgear is sold all around campus at military merchandise suppliers and resembles the headgear worn by U.S. soldiers in World War II.
2) Brad Morse, “From pile to stack: the origins of Aggie Bonfire,” The Battalion, November 16, 2017. Accessed March 5, 2018. http://www.thebatt.com/traditions/from-pile-to-stack-the-origins-of-aggie-bonfire/article_781cce84-c
3) Native American tribes such as the Comanche, Cheyenne, Kiowa, Pawnee, and others lived in tipis, which were a nomadic style of housing that could be transported easily. The basis of the design consisted of standing a long log vertically upright as a base to lean other logs diagonally onto to form a circle of logs around the original center log.
4) Reed Arena is the basketball stadium on campus, the only location besides Kyle Field that would be large enough to hold everyone in attendance.
5) The tradition of the 12th Man originated in Dallas on January 2, 1922 during the Dixie Classic. E. King Gil, an Aggie, was called from the stands to suit up as a substitute because so many players were injured during the football game that they just needed one more person to be on the team. Whether or not he ended up playing was irrelevant. E. King Gil’s readiness to stand with his team on a moments notice was admired and soon inspired all students to stand at every athletic game from then on.