This monument commemorates the battle that took place between the Native American warriors led by Red Stick Creeks and soldiers led by American forces were led by Brigadier General John Coffee. The battle was fought on November 3, 1813 and was part of the larger battle that saw the Creek and several other Native American tribes fighting with British forces during the War of 1812 in hopes of using the British to secure better trade deals while also thwarting the western expansion of the United States. The battle was also a turning point in the Creek Wars of 1813-1814. Coffee was under direct orders from General Andrew Jackson and the ended with a resounding victory for the Americans. 186 Creek warriors perished in the battle compared with only five American troops.

This monument marks the approximate location of the Battle of Tallushatchee. 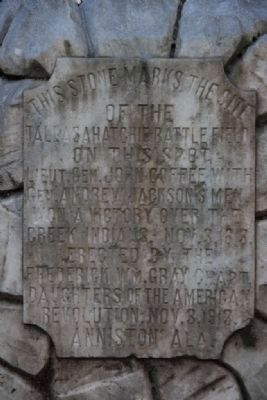 Brig. Gen. John Coffee who led the Americans to the victory at the Battle of Tallushatchee. 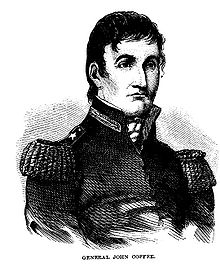 The Creek War of 1813-14 begun as a conflict between tribes that belong to the Creek Nation. The Red Sticks opposed the treaty signed by the Creek National Council because they believed that it gave too much land to the Americans. The two sides battled and this civil war soon expanded into the larger regional contest between Native tribes, the British, and the Americans.

The Fort Mims Massacre led to the Battle at Tallushatchee. On August 30, 1813, Creek Indians that were part of the Red Stick faction drove a force of around 1,000 warriors to the gates of Fort Mims in Alabama. Fort Mims was defended by 265 U.S. militiamen and the larger force of Creeks stormed the fort and won the battle with ease. The resulting slaughter, which included the killing of women and children, led to reprisals by American troops fighting both the British and Native tribes in the area.

After suffering the loss of men from his Tennessee militia in the Fort Mims Massacre, General Andrew Jackson assembled a force of around 2,500 men and marched into the Mississippi territory in search of Creek Indians. This army constructed Fort Strother about fifteen miles east from the Red Stick Creek town of Tallushatchee. General Jackson ordered Brigadier General John Coffee to lead 900 men in an attack against the village and hoped that the resulting battle would force the Red Stick warriors to abandon their fight.

On November 3, 1813, Coffee and his troops marched to Tallushatchee. When his men were one mile away from the village, Coffee split into two sections and created a perimeter around the village. Once in place, two detachments of scouts were sent into the middle of the village in hopes of drawing the warriors out of their homes. While the Red Sticks hastily made defenses, they were devastated by Coffee and his much larger force. The fighting ended with the death or capture of every Red Stick warrior in the village.

The battle resulted with the death of 186 Red Stick Creeks and 5 Americans killed plus 41 wounded. The remaining Red Sticks were taken as prisoners. The battle was the first victory for the Americans in the Creek War that coincided with the War of 1812 and convinced many Creek villages to seek alliances with the Americans instead of the British.