Leo Petroglyphs were created by the Fort Ancient Culture and date back more than a thousand years. The site is currently a state memorial and nature preserve. The outcropping of rock, now protected by a wooden shelter, has thirty-seven glyphs (symbols) carved on it. The glyphs include images of snakes, birds, fish, humans, and human and animal footprints. Very little is known about the Fort Ancient Culture other than the fact that they were mound builders and were prominent from approximately 1000 to 1650 C.E.

An example of the petroglyphs (rock carvings) 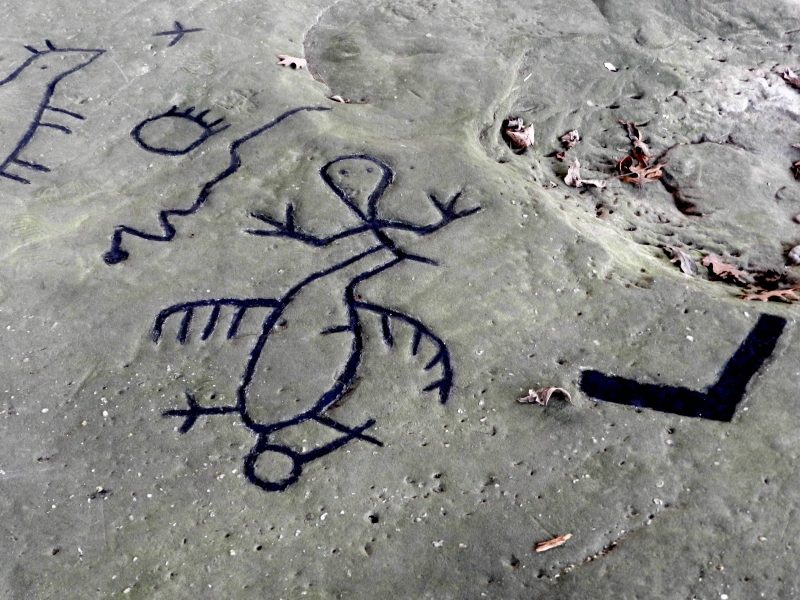 The Fort Ancient Culture is a modern construct. Like the Hopewell and the Adena, the term Fort Ancient is a blanket term for a loosely associated group of people that lived in southern Ohio before contact with Europeans. Evidence suggests that the Fort Ancients were the ones who built the Great Serpent Mound in Adams County, Ohio, the largest effigy mound in the world. It appears that at a later date in their history, the Fort Ancients stopped building mounds and conducted burials in simple graves, but very little else is known about them.
Native tribes like the Fort Ancients, the Hopewell, and the Adena settled in Jackson County because of the natural salt deposits called licks. A salt lick is a naturally occurring deposit of salt that has to be dug out of wells. The water in the wells is called brine, and in the production of salt, the water would be evaporated or boiled away leaving only the salt behind.
After Europeans began to settle in what is now the United States, Native tribes were forced westward. When the fur trade began, eastern tribes like the Shawnee moved into the Ohio country in search of beaver pelts to trade with European settlers. The fur trade led to the Beaver Wars, in the course of which, Southern Ohio was nearly depopulated, and the tribes that were living in the Ohio River Valley were replaced by eastern tribes. However, the people that were living in Southern Ohio were not exterminated, though many were killed, those that remained in southern Ohio stayed and were assimilated into the eastern cultures that were moving in until further European expansion pushed the native tribes out of the Ohio Country altogether with the Treaty of Greenville after the Battle of Fallen Timbers.