The first church that was known as St. James' was established by the Bishop Assistant to the Protestant Episcopal Church in October 1810. Prominent Hudson Valley families such as the Bards, Hughes, and Livingstons had raised funds to build the only Protestant Episcopal Church north of Poughkeepsie and south of Hudson. In 1844, a new church was unveiled, this one in the Gothic Revival design. Just over ten years later another St. James' Chapel was established down the road in Hyde Park on East Market Street and would serve as the place of worship during the winter months until 1955. The family most associated with St. James' is the Roosevelt family. Franklin Roosevelt and his family worshiped at St. James', he serving as a Vestryman and a Senior Warden. Numerous members of the Roosevelt family, including FDR's parents and some of his children, are buried at St. James' and Eleanor Roosevelt's funeral took place there in 1962. In 1984 a devastating fire left intense damage to the church and the cost was more than $1 million for it to be restored. St. James' continues to attract visitors and tourists with its annual Graveyard Tours, bringing historical figures from the Hudson Valley back to life.

The front of St. James' Church in Hyde Park 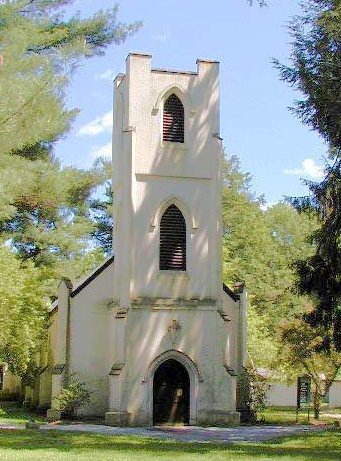 The interior of St. James' as it appeared in the 1960s 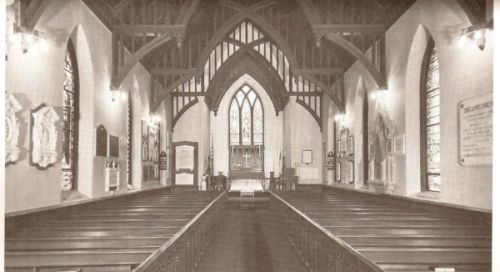 President Franklin D. Roosevelt, along with his son James, wife Eleanor, and mother Sara, attend church at St. James' with King George VI and Queen Elizabeth of England in June 1939 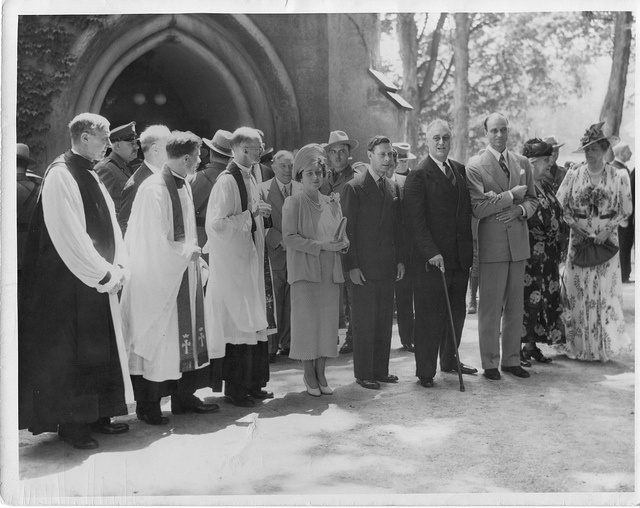 The cemetery at St. James' where members of prominent New York families, including the Roosevelts, are buried 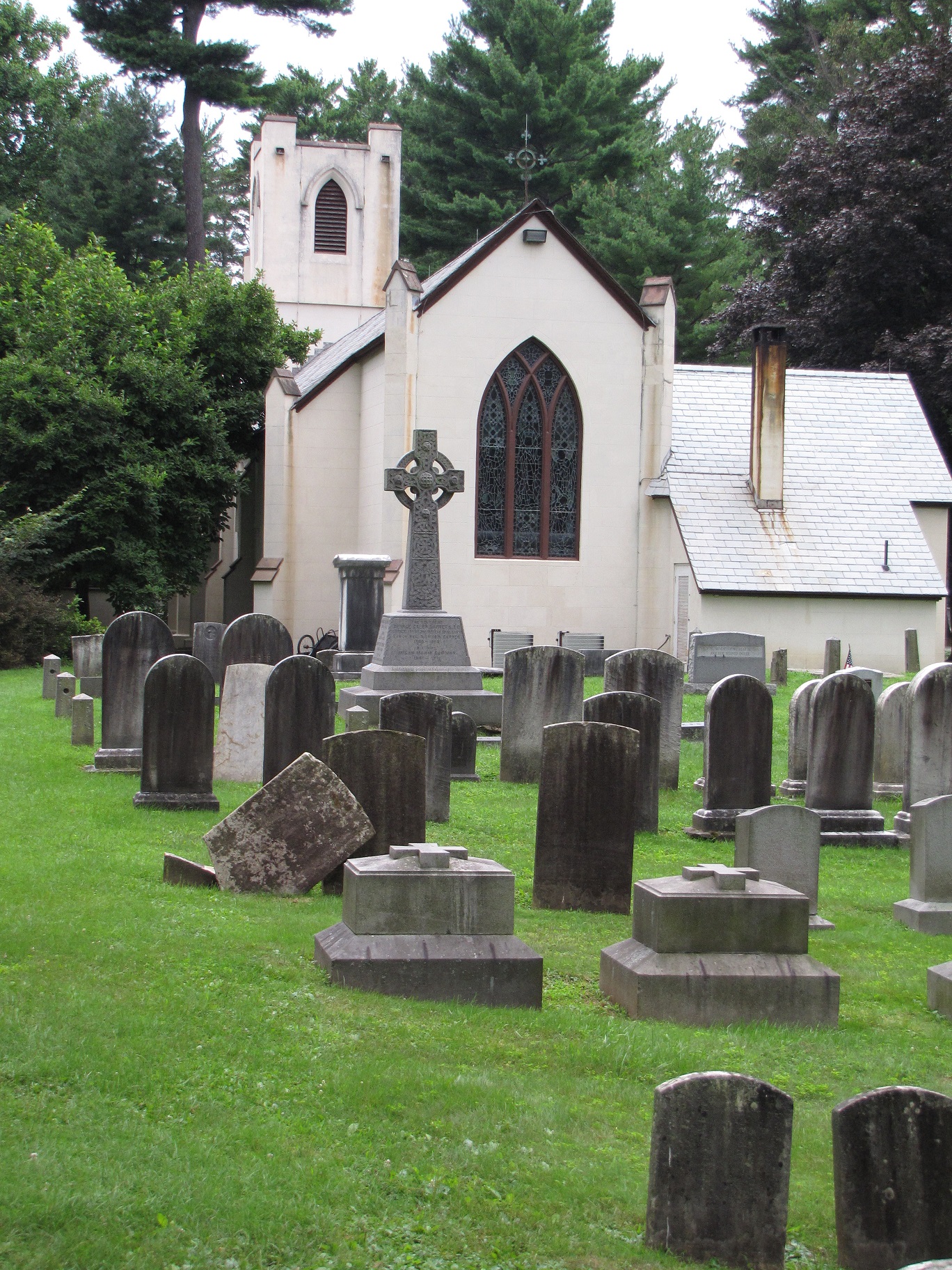 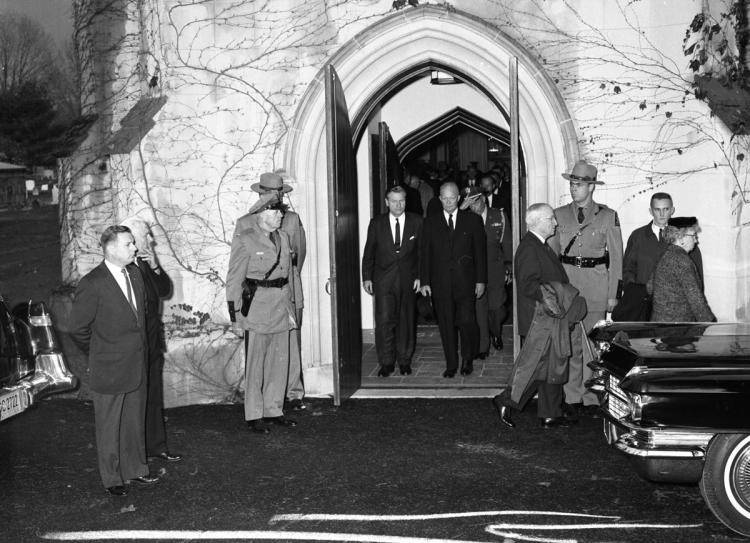 The efforts to begin building what would become St. James' in Hyde Park began in 1770 when Dr. John Bard acquired land issued to him by a grant from the British Crown. The land, a part of the Five Partners Patent, was named Hyde Park, after Edward Hyde, Lord Cornbury and the Governor of the Colony of New York. After the death of Dr. John Bard in 1799, his son Samuel continued to pursue his father's dream of organizing a new parish. The property on which the parish was to be built was located south of the Bard family home and included the burial plot of Dr. John Bard and other Bard family members. The Bards and other Hudson Valley families such as the Livingstons, Hughes, and Bartons began raising funds to build the Protestant Episcopal Church.

The first St. James' was built in 1811. It cost $2701.75, was made of brick and stone, then stuccoed and painted yellow, and measured in at 30 by 50 feet. In 1832, the then rector of St. James', Reverend Samuel Roosevelt Johnson, called for a school to be built on East Market Street in Hyde Park which he deeded to St. James'. In 1839, a maintenance inspection found that that the church structure was failing and the building was razed. The first church service in the brand new Gothic Revival church, with a black walnut ceiling and an open-timbered roof, was held in November 1844.

Throughout the 1840s, the school in Hyde Park located on East Market Street continued to grow and acted as a Sunday School location, a Guild Room, a reading room, and a library for the town to enjoy. In 1857, a Swedish Gothic design chapel was completed on East Market Street. The chapel was used during the winter months as it was heated and the main church was not. The chapel continued to be used for those few months until 1955 when heating was installed in the church. In the early 1950s, the high-peaked roof that sat over the tower was removed and the original 1811 square battlement tower returned.

The family of President Franklin D. Roosevelt has long been associated with St. James'. Throughout his life, including during his presidency, Roosevelt served as a Vestryman and a Senior Warden. St. James' Cemetery, which began with Dr. John Bard and the Bard family, is now the final resting place of FDR's parents, Sara and James, his half-brother, four of his children, and some grandchildren. When Eleanor Roosevelt passed away in 1962, her funeral was held at St. James'. President John F. Kennedy and Jacqueline Kennedy, Harry and Bess Truman, Lyndon and Lady Bird Johnson, Dwight Eisenhower, and Governor Nelson Rockefeller all gathered in St. James' to remember the "First Lady of the World."

On June 10, 1984, a devastating fire broke-out in St. James', believed to be started by arson. The fire began under the bell tower and spread to the ceiling of the church; the organ pipes were melted, the altar destroyed, and most of the stained glass windows were shattered. Members of the parish opted to restore the church at a price estimated at more than $1 million rather than demolish it and build anew. St. James' continues to attract tourists and interested spectators with their annual Graveyard Tours. Each year different historical characters who are buried in the cemetery, from families such as the Bards, Livingstons, and Roosevelts, are portrayed by local actors who relay their life stories. More than 200 years after its creation St. James' continues to serve as a beacon in Hyde Park.