Located in Clintonville, a quiet suburb of Columbus, Ohio, the Whetstone Park of Roses exists just north of The Ohio State University. The garden functions as a gathering place for special occasions and a reminder of an important time in American history. Although it was just a farm at first, it was later utilized as a victory garden during war time and its journey to becoming the park it is now was not always easy. However, through trials and changes, it remains.

Photo of the fountain added in 2013 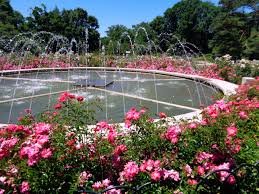 In 1944, the mayor of Columbus, James A. Rhodes purchased the plot of land that is now Whetstone Park. Before it was a park though, it was farmland. It was previously owned by a couple of the name Gay, Lewis and Betsy Gay. Even before they owned it, it was owned by John Rathbone under the United States Military Land Grants. Rathbone had likely gotten the land as a result of the Revolutionary War in the 1803 act. Military Land Grants gave land to officers in the Revolutionary War, different acreage for different rankings. They were purposefully assignable, allowing for the exchange between Rathbone and Lewis and Betsy Gay.

The land was later passed on to Margaret Fuller who subsequently passed it on to the Miller family. At this point, in 1944, the mayor stepped in and purchased the plot of land. This land was used for the interest of America before being officially turned into a park and named Whetstone in 1949.

Throughout the end of World War II, the park functioned as a mass of Victory Gardens. The idea of Victory Gardens originated during World War I as a result of a major food shortage in Europe as a result of recruitment to the war effort. The United States stepped in to help, but the government required a lot of effort to be able to feed their own country and many in European countries. Therefore, the everyday United States citizen was encouraged by his/her government to plant a garden and contribute to the war effort. This country-wide contribution engendered a spirit of national pride and importance to the whole in a time when many people felt hopeless and downtrodden. The most popular crops included different leafy greens, tomatoes, carrots, and various starches.

After the war, the Victory Gardens went dormant and Whetstone was transformed back into a local park for the community. In 1952, the Columbus Rose Club, Ohio Rose Society, and American Rose Society got their wish of a rose garden in Columbus. The American Rose Society was housed in the municipal garden for a few decades, then moved south to Louisiana. Because Columbus is so cold in the winters, the roses cannot survive all year round and therefore mass amounts of the flowers die annually. At first, the cost was just too much for the community to bear. Sadly, it was inevitable that Clintonville would have to say goodbye to its beloved garden. Thankfully, the Columbus Park of Roses Foundation was formed to help cover the cost and keep the beautiful history of the park alive. The foundation still works with the community to this day to make sure everyone can experience the unique rose garden.