The parlor at Fort Hill was built in 1827 and was the most expensive addition to the house. As a teenager, A.P. Calhoun inscribed in the plaster of the wall by the door, "1827, A.P. Calhoun." This room, along with the State Dining Room next door, was a part of the formal entertaining space of Fort Hill. On November 13th, 1838, Anna Maria Calhoun married Thomas Green Clemson in the parlor. The parlor hosts a variety of important Calhoun-Clemson artifacts including, Floride Calhoun's Gunther and Norwood pianoforte along the left wall. The piano to the right of the entrance was her last piano and is the only piano in the home that is still playable. Thomas G. Clemson was also musically inclined, playing both the violin and the piano during his lifetime, as well as composing eight songs during the Civil War. Not only was he a talented musician, but Mr. Clemson was also a gifted painter and a number of his paintings are on display in this room. The portraits of the Clemson children rest on the west wall, Floride Elizabeth Clemson and John Calhoun Clemson, opposite a large portrait of their mother Anna Maria. The wallpaper in this room is an exact replica of the wallpaper that would have been on display during the families' residencies. The pattern of the wallpaper reflects two important 19th-century cash crops, the cotton blossom and tobacco leaves. The simple wooden, Windsor chair in front of the fireplace is said to have been one of George Washington's camp chairs during the Revolutionary War and the sofa along the right wall came to Fort Hill from Washington's estate, Mt. Vernon. Beside the Windsor chair, sits a burgundy chair and accompanying ankle-rest. This chair was a gift to Thomas Green Clemson from King Leopold I of Belgium. On the armrests of the chair, you can see the likeness of King Leopold I carved into the wood. 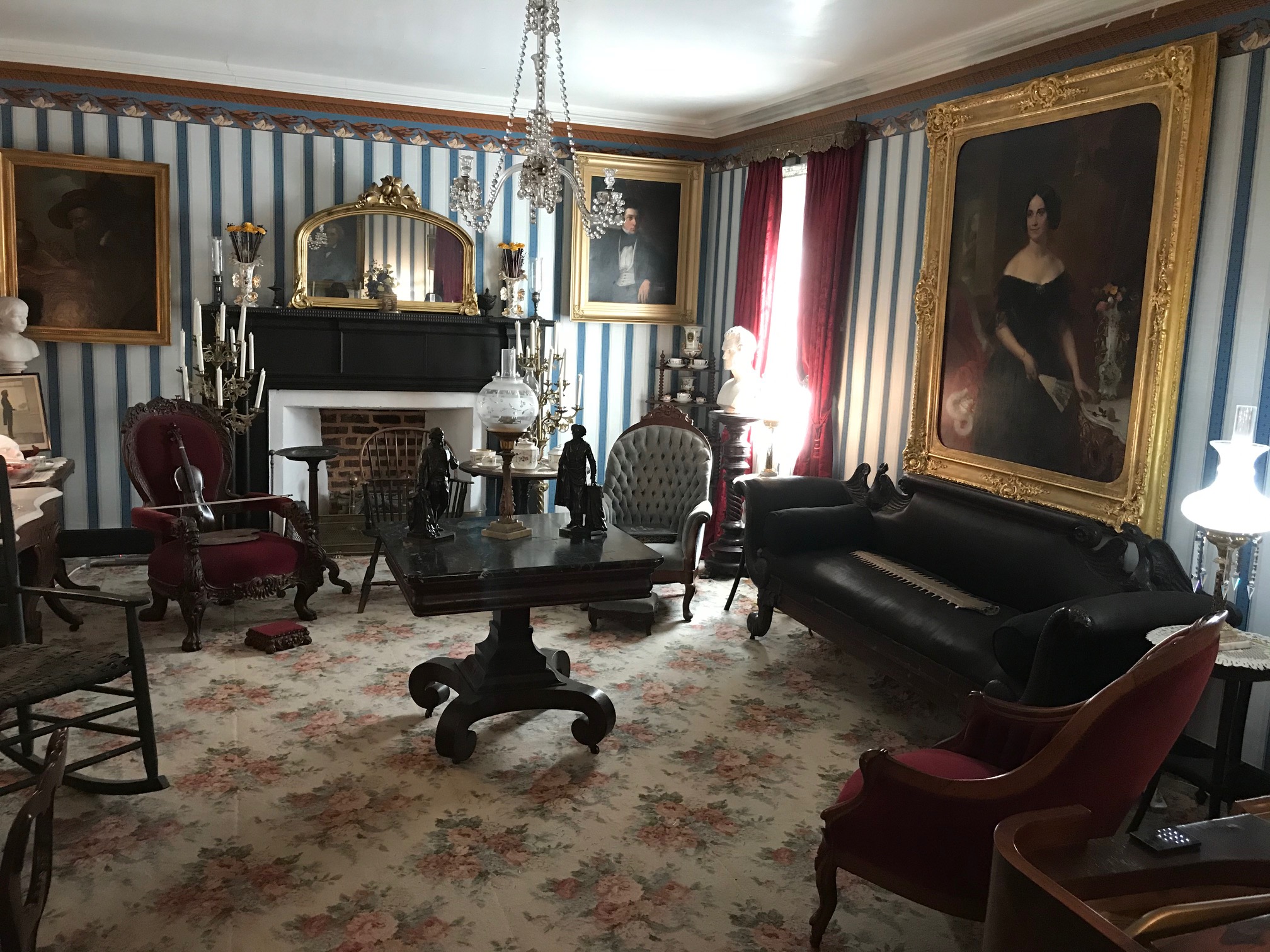 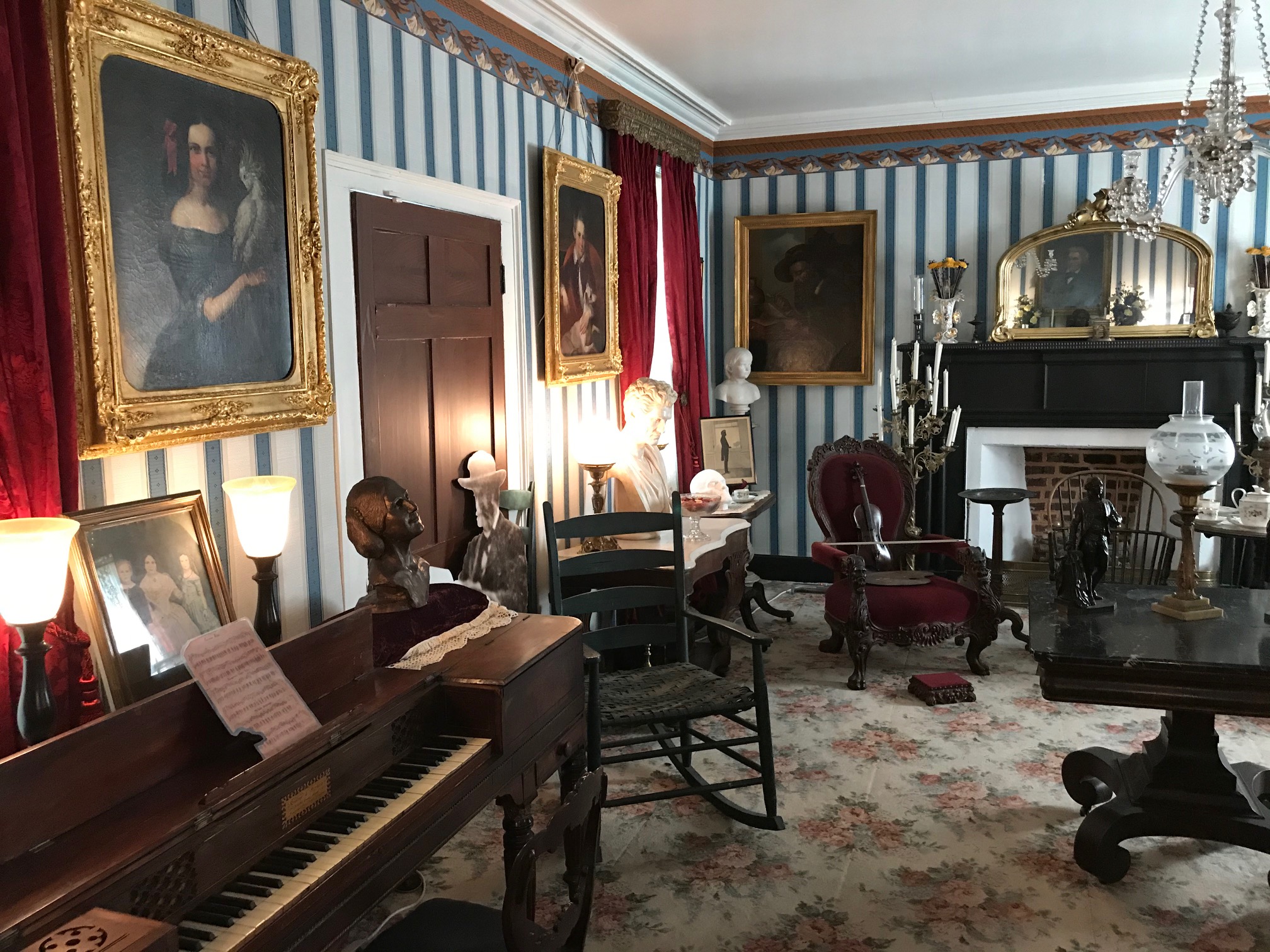 Maintenance and Preservation is an ongoing effort 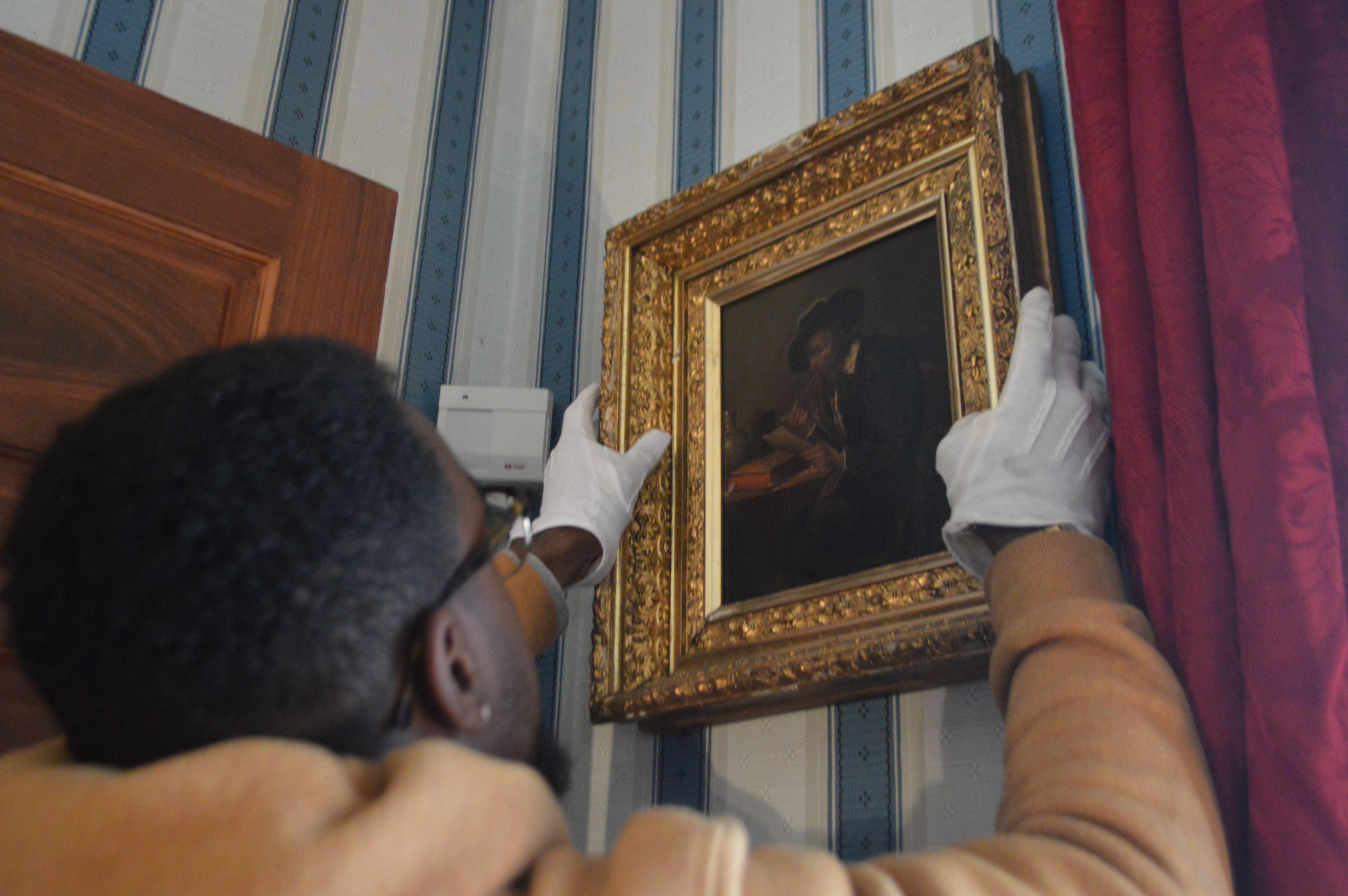 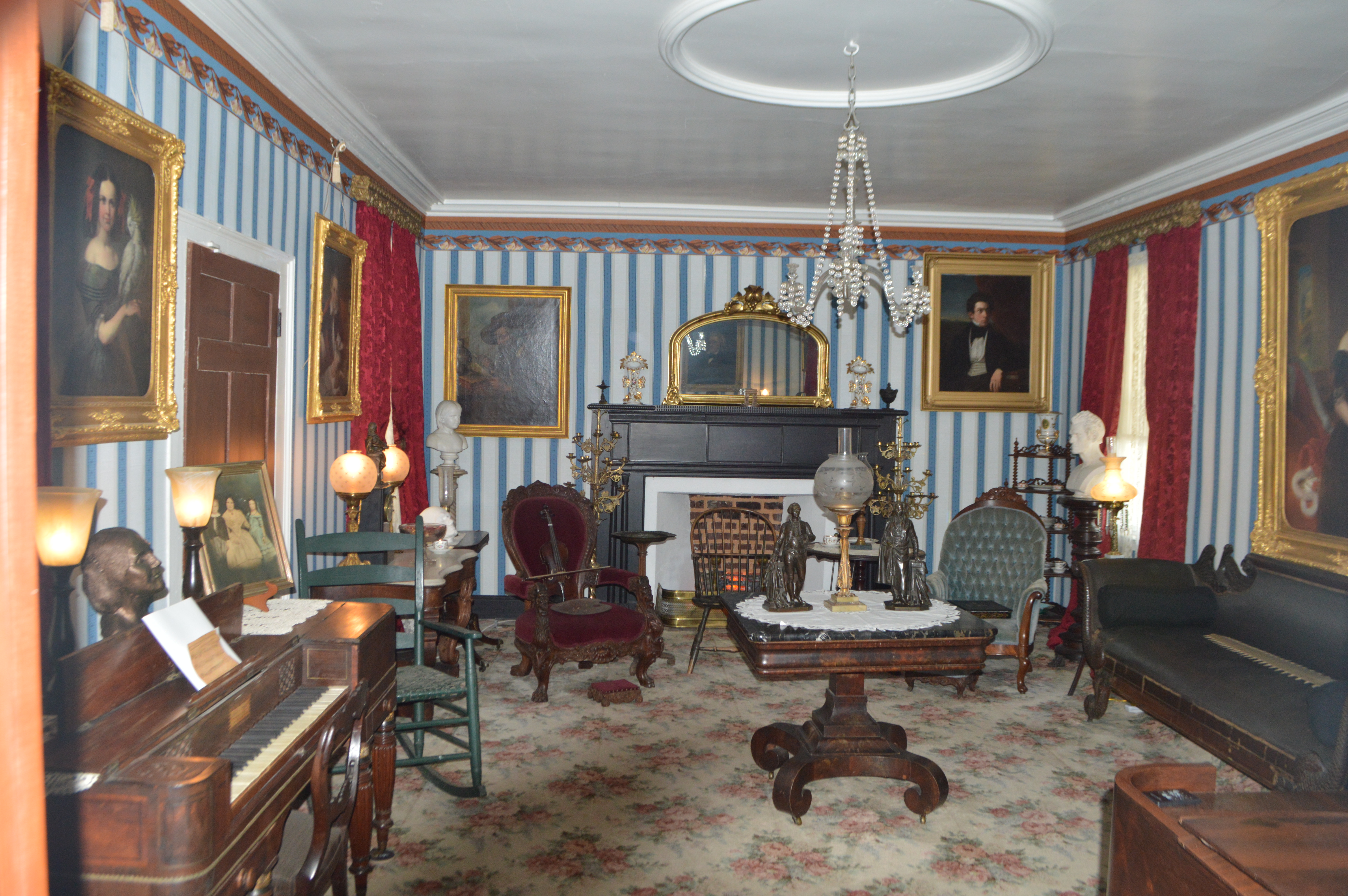 Thomas Green Clemson IV was born on July 1st, 1807 and was the son of Thomas Green Clemson III, a Quaker merchant, and Elizabeth Baker, the daughter of a prominent Episcopalian family. Little is known about Mr. Clemson's early education, but during his formative years he excelled in the sciences and mathematics. At the age of 16, Clemson applied to West Point and the then Secretary of War, John C. Calhoun, "received a letter of recommendation from the Pennsylvania delegation on Clemson's behalf" (1). At the time, the most advanced scientific education could only be obtained in Europe. In 1826, Mr. Clemson began a tour of Europe before enrolling at the Paris School of Mines and later studied at the Sorbonne Royal College of France in Paris. The young Clemson was nicknamed "the giraffe" by his French classmates because of his significant height, standing at six foot six inches tall.

In the spring of 1838, Clemson met Anna Maria Calhoun in Washington, D.C. Anna Maria was twenty-one years old and Clemson was ten years her senior. After a courtship of only six months, the couple was married here in the parlor of Fort Hill. The newly weds spent the first two years of their marriage in Philadelphia before moving in with Anna's family at Fort Hill. Their first three children, a daughter, unnamed, who died in infancy, a son, John Calhoun Clemson, and another daughter, Floride Elizabeth, were all born at Fort Hill. Floride Elizabeth and her brother would survive into adulthood and their childhood portraits now hang in the parlor.

In 1844, John C. Calhoun, who had recently been named Secretary of State for President John Tyler, aided in the appointment of his son-in-law as chargé d'affaires or diplomat to Belgium. This made Clemson the highest-ranking ambassador from the United States to Belgium. The Clemsons lived in Belgium from 1844 to 1852. King Leopold I of Belgium shared Mr. Clemson's interest in art, and later "awarded Clemson the Order of Leopold medal" which is on display at Fort Hill (1). Mr. Clemson also received the Leopold Chair in the parlor as a gift from the king during this time.

After leaving Belgium, the Clemson family moved to a home in Maryland where they would live while Mr.Clemson served as the Superintendent of Agricultural Affairs from 1860-1861. At the outbreak of the Civil War, Mr. Clemson chose to resign his post and join the Confederacy with his son. Clemson was fifty-four years old when he enlisted in the Confederacy on May 7th, 1863 and was assigned to the Army of the Trans-Mississippi Department. On May 18th, 1866, after the conclusion of the Civil War, Mr.Clemson "requested and received a pardon from President Andrew Johnson" (1). He returned to Pendleton and from 1868 to 1871 acted on behalf of his mother-in-law's estate. He signed freedmen contracts with freedmen and women who were employed at Fort Hill. These contracts, "which spelled out some 10 to 15 articles of agreement, were similar to other labor contracts of the era" (1).

In the summer of 1871, the Clemson family suffered tremendous tragedy. Their daughter, Floride Clemson Lee, died on July 23rd, 1871, at twenty-eight years old of consumption. She left behind a one-year-old daughter, Floride Isabella Lee, the Clemson's only grandchild. On August 10th, 1871, John Calhoun Clemson was killed in train wreck in Oconee, South Carolina, only seventeen days after his sister's death. Having lost their only two surviving children, Anna Maria and Thomas Green Clemson retired to Fort Hill in 1872. Three years later, Anna Maria died of a heart attack at fifty-eight. Her will, while not specifically mentioning a desire to create a college out of Fort Hill's land, previous communications between the couple indicated their desire that a college would be built on the land she inherited from her family.

In the last thirteen years of Mr. Clemson's life, he "set out to establish, in the drafts of his will, the type of scientific institution" that he desired to be built out of his wife's land. His last will and testament ordered that his wife's land and a sum of $80,000 dollars be given to the state of South Carolina in the interest of constructing an agricultural college in the Upstate.