This historical marker near the former Governor Ross Mansion denotes the location of the place where enslaved persons lived during the 1850s. Once owned by the Governor of Delaware, William Ross, this former slave quarter is located next to the former plantation house and is the only documented and remaining log slave quarters in Delaware. This building was originally a one-story structure and was later relocated northeast of the mansion after the Civil War when a second story was added to accommodate tenant farmers. The Ross family maintained the property until it slipped into foreclosure in 1924. The property was donated to the Seaford Historical Society by the University of Delaware in 1992.

Slave Quarters historical marker. The structure was relocated further away from the mansion after the Civil War when it was converted into a two-story home with the purpose of housing tenant farmers. 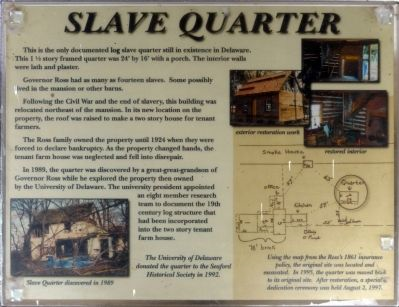 Slave Quarter located near Governor Ross Plantation. A research team, appointed by the University President, was given the task of documenting the slave quarter. It was then handed over the Seaford Historical Society in 1992. 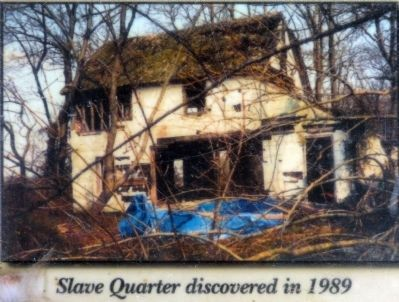 The Governor Ross Plantation was established in the 1850s. It had been built to house the Democratic Governor of Delaware, William Henry Harrison Ross. Ross was a beloved politician who owned as many as fourteen slaves. Though Delaware had been advocating for the North during the Civil War, he loved the South and supported the Confederacy. Unfortunately, because of this, he had a slight fall from grace and was forced to flee his mansion and seek refuge in England during the war. The plantation was purchased by the Seaford Historical Society in 1976. The log slave quarter was discovered thirteen years later by the great-grandson of Governor.

The Ross Plantation was large enough to accommodate the Governor, his wife, his children, and his fourteen slaves comfortably. Some slaves resided within this quarter while others took up shelter in either the mansion or other barns on the property.  Once the home had been relocated further away from the mansion it was converted into a two-story home with the purpose of housing tenant farmers. During this time, some tenant farmers were slaves who had been freed by the Emancipation Proclamation. The Ross family was forced to declare bankruptcy in 1924. The tenant house slipped into decline amid the change in property ownership that erupted over the next few years. It was discovered by Ross’s great-grandson in 1989. The University of Delaware was in possession of the property at the time. A research team, appointed by the University President, was given the task of documenting the slave quarter. It was then handed over the Seaford Historical Society in 1992.

Governor William Henry Harrison Ross held a firm belief that southern states had rights that entitled them to slave ownership and he was not shy in encouraging those who shared his views to stand firm. He surrounded himself with other southern sympathizers throughout his life. Eventually, his views and opinions would compel him to flee his beloved mansion for the sake of his own safety. He died in Philadelphia, Pennsylvania on June 30, 1887. Today, the only remaining slave quarters in the entire state of Delaware, along with Governor Ross’s Plantation, is open for public viewing.