The 1762 Bethlehem waterworks system is thought to be the first municipal water pumping system created in the United States. Designed by Johann Christopher Christensen, the first system was built in 1755 but had to be rebuilt due to systemic flaws. The 1762 waterworks served the Bethlehem community until 1832 when steam-powered pumps replaced those powered by water. While the original building still stands, the internal machinery, including the 18-foot diameter water wheel, has been replicated. It was designated a National Historic Landmark in 1981 and it is also listed as a Historic Civil Engineering Landmark and an American Water Landmark.

The inner-workings of the waterworks building pumped water to the residents of Bethlehem from 1762-1832. 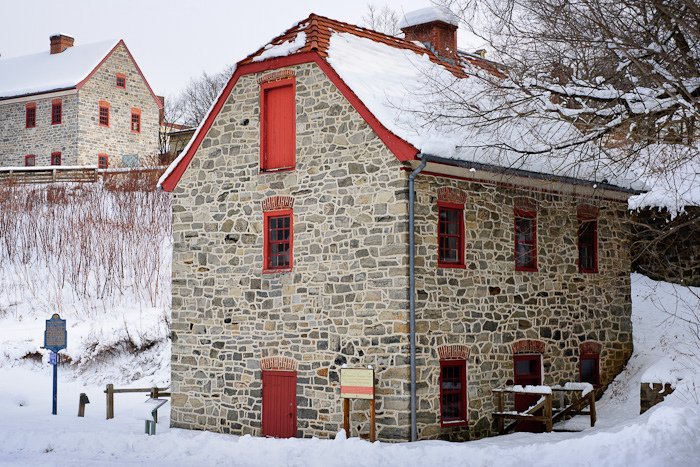 The massive wooden gears that were turned by the waterwheel to power the pumps. 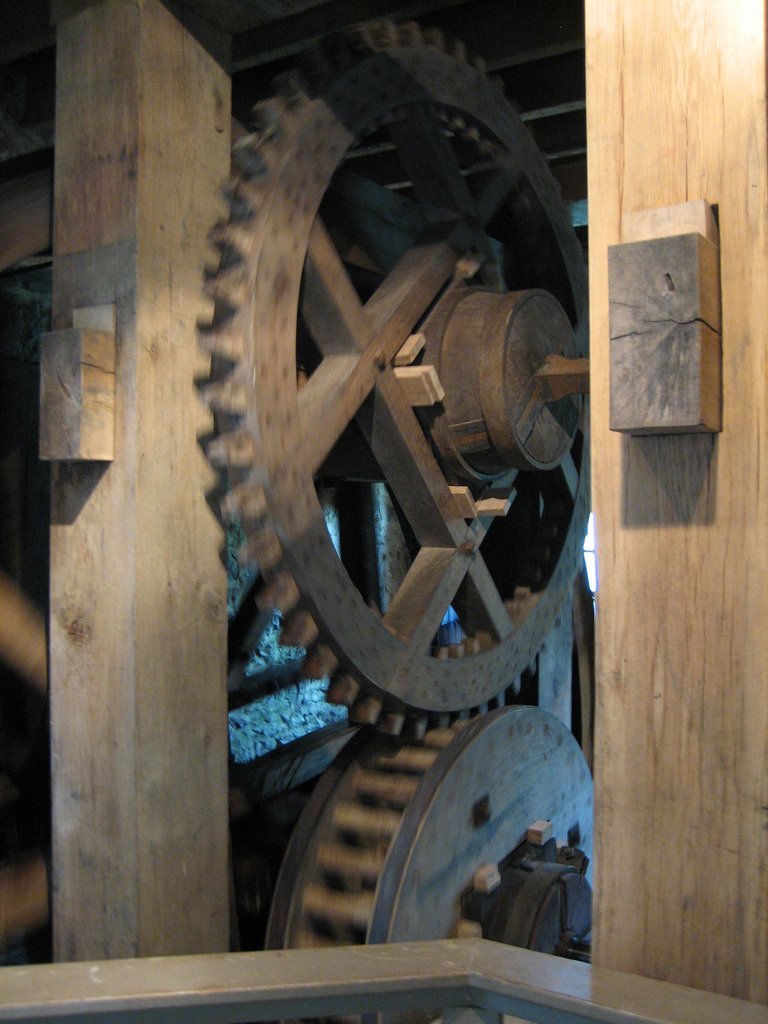 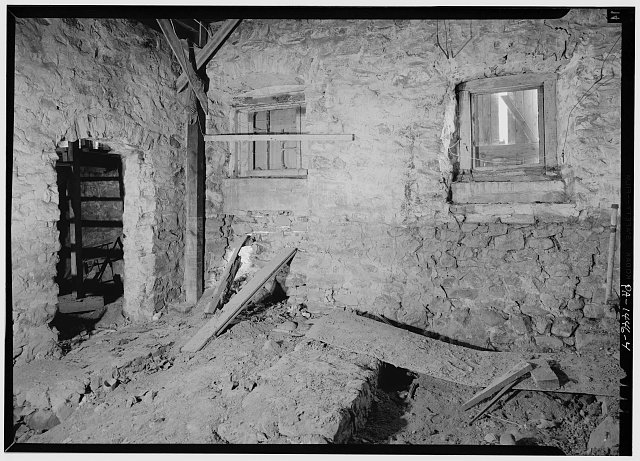 The waterworks, in the background, during recent flooding. 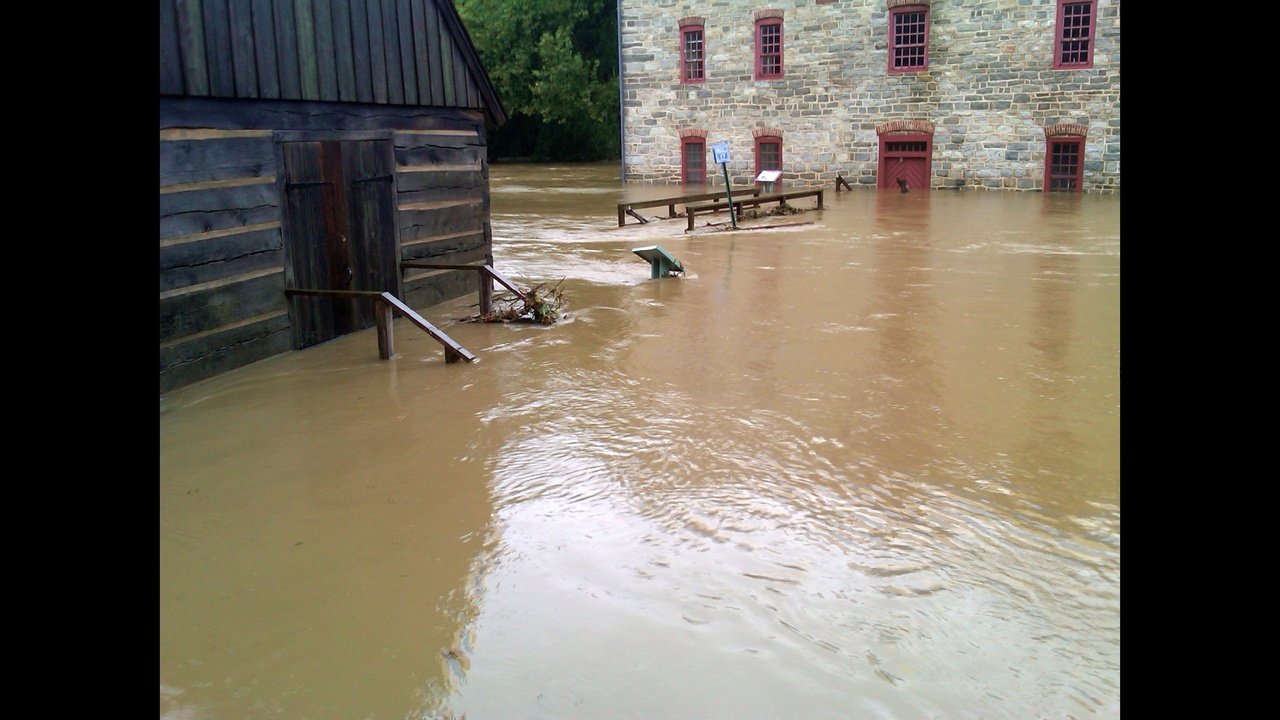 The Waterworks is part of the larger Colonial Industrial Quarter. 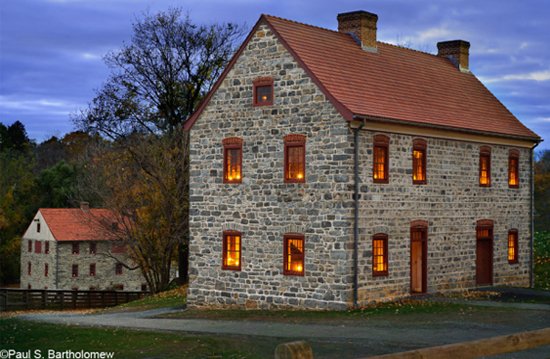 By the 1750s, the Moravian community of Bethlehem had grown to a population of several hundred after its founding in 1741.  Situated along the banks of the Monocacy Creek, citizens labored daily to haul drinking and washing water from the creek up the bluff to their homes.  For this reason and fire safety, the community contacted local engineer, Johann Christensen, to design a water pumping system similar to the ones utilized in his native Germany.  What he designed and implemented became the first public water system to utilize a pumping system (Boston’s, designed in 1652, was solely a gravity system) in American history.

Christensen’s system utilized a spring along the Monocacy to supply the community with water and water from the creek to spin his water wheel which, in turn, powered the pumps.  These pumps pushed water through wooden pipes 320 feet and 94 vertical feet to a holding tank where the Central Moravian Church now sits.  From there, gravity carried water to cisterns located throughout the community.  Christensen’s 1755 system had to be rebuilt due to pipes bursting under excessive water pressure and the improper positioning of the waterwheel.  Thus, the 1762 version was created using an 18-foot diameter wheel and three single-action force pumps of cast iron all housed in the 24-foot square pumphouse that still stands.

The system continued to expand and improvements were made as the years passed.  In 1786, the wooden pipes were replaced with lead which were, in turn, replaced with iron pipes in 1813.  Christensen’s waterworks served Bethlehem until 1832 when steam-powered pumps were utilized in the adjacent oil mill.  The waterworks building was then later utilized as a private residence and garage before being acquired by Historic Bethlehem Museums and Sites.

By the 1950s, the area that is now Bethlehem’s Colonial Industrial Quarter, considered one of America’s earliest industrial parks, had become an overgrown scrapyard.  Archeological work in the area began in the 1960s which was followed by clean-up and restoration efforts.  The waterworks building was restored in the 1970s and its internal mechanisms were re-created using 1767 drawings that were located in the Moravian Archives in Herrnhut, Germany.  Its undershot waterwheel features a two-foot diameter hub and is comprised of six sections of 48 fins each.  This recreated waterwheel was installed in 1992.

Today, the waterworks is part of the larger Bethlehem Colonial Quarter and continues to be operated and maintained by the nonprofit Historic Bethlehem Museums and Sites.  Recent efforts have been directed to preventing the near annual flooding of the waterworks as well as the surrounding buildings.  The waterworks is open for special events throughout the year.

"The Significance of the Bethlehem Waterworks."  The Pennsylvania State University.  Accessed January 7, 2019. https://www.engr.psu.edu/mtah/articles/bethlehem_waterworks.htm

Open for special events throughout the year. Please call or visit website.