Fraunces Tavern Museum is located inside a building that was completed in 1719 as a home for the family of Stephen De Lancey. Samuel Fraunces purchased the building in 1762 and operated the Queen's Head Tavern. Leading up to the American Revolution, the tavern was the site of many important political discussions among colonists. After the war, the building housed the new government's departments of Foreign Affairs, War, and Treasury from 1785 to 1788. In 1900, the aging building was almost razed until an effort was made by the Sons of the Revolution, the Daughters of the American Revolution, and the founder of the Society for the Preservation of Scenic and Historic Places succeeded in saving the historic building. In 1907, a combination museum and restaurant opened in this building. This business thrived for many years and in 1981, preservationists and historians restored the second floor's "Long Room" as a colonial tavern. The museum continues to expand and now offers nine galleries filled with artifacts and exhibits related to the history of New York and the American Revolution. The restaurant is open daily.

Fraunces Tavern offers a restaurant, tavern, and museum. The building is listed on the National Register of Historic Places. 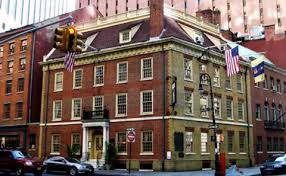 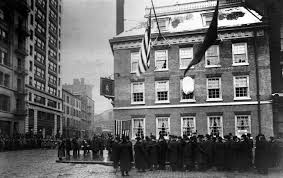 History of the American Flag gallery 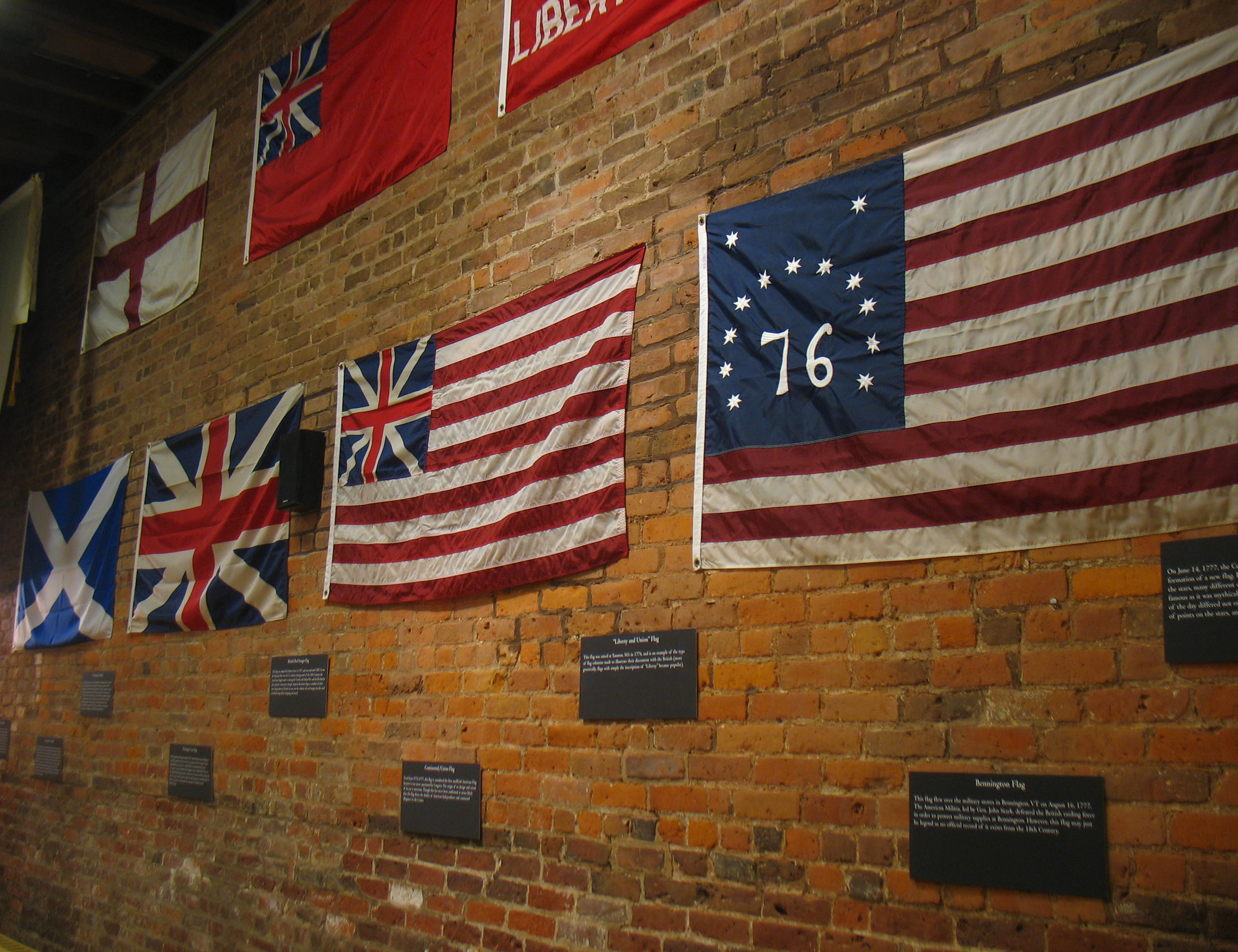 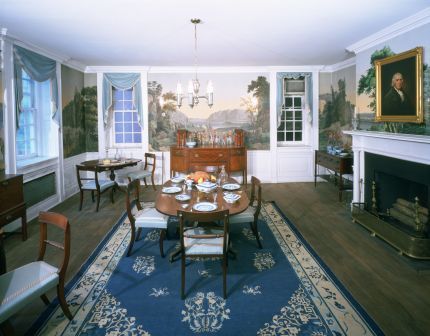 The property where the Fraunces Tavern is now located was a body of water until the 1600s. New York City was rapidly growing into a colonial port by the end of the 17th century. In order to raise funds for a new market house and to construct ferries, the city sold lots in 1691, which were created by filling in part of the Great Dock along Pearl Street. The new block protected the city hall on the north side of the street from flooding.

The plot of land that 54 Pearl Street is located on was purchased from New York City by Stephanus Van Cortlandt in 1686. Van Cortlandt was the son of Olaff Stevenson Van Cortlandt, who moved to New Amsterdam in 1638. His daughter Ann married Stephen De Lancey, a young French merchant, in 1700. De Lancey used the family land to build a residence─the same building that would later be home to Faunces Tavern.

From 1738 until 1740, Henry Holt rented 54 Pearl Street to teach the latest European styles of dance. From 1740 to 1759, the building was most likely used to stock merchandise and for residences. In 1759, the firm De Lancey, Robinson, and Company purchased the building. The firm, composed of Stephen De Lancey’s son Oliver, Beverley Robinson, and James Parker, dealt with imported goods from Europe and the East and West Indies. Despite its prime location, business was slow, so in 1761, the Company decided to offer rooms for rent, but this wasn’t as successful as they had hoped. The law firm had to sell the building in 1762.

A man named Samuel Fraunces purchased 54 Pearl Street, and opened Queen’s Head Tavern in 1762. In 1765, he leased management of the tavern but then resumed ownership of the tavern in 1770. The Fraunces Tavern was a place where travelers and locals would visit and share news of the day and current ideas. The New York Chamber of Commerce was founded at the Tavern in 1768. Many New York clubs held meetings at the Tavern, including the New York Society Library, the Social Club, the Friendly Brothers of St. Patrick, the Knights of the Order of Corsica, and the Saint Andrew’s Society.

As a rebellion against England arose in 1755, Samuel left New York and went to New Jersey.  He left the operation of the tavern to his son-in-law, Charles Campbell. The tavern irregularly provided food, drink, and community throughout the war. In 1780, Governor Tyron hosted a dinner for seventy people, which included members of the Council and British generals. By 1783, Fraunces Tavern resumed normal operations of the tavern, and the American Commissioners made the tavern their headquarters.

On November 25, 1783, British troops left New York City, which was later referred to as Evacuation Day. The Evacuation Day celebration was held at Fraunces Tavern. During that week, George Washington was in the city, and he made use of the tavern by dining in and ordering take-out. Officers escorted Washington from the tavern to the Whitehall waterfront, where he boarded a barge that took him to New Jersey.

Samuel continued running the tavern as post-revolution life settled down. In early 1785, Fraunces agreed to lease the Tavern to the Continental Congress for use as office space for the Department of Foreign Affairs. Two weeks after the lease was signed Samuel sold the tavern to a Brooklyn butcher named George Powers. Two years later, both the War Department and the Treasury had also leased rooms in the building.

As the city continued to grow, the area around 54 Pearl Street did as well. Between the years of 1827 and 1833, eleven other buildings were built on the block. In 1832, 1837, and 1852, the building suffered serious fires. After each fire, the owner rebuilt and added contemporary add-ons. New floors and a flat roof were added. Upper floors were each divided into thirteen bedrooms and a toilet to accommodate tenants. The growing city was running out of building space, and old buildings were being replaced with new ones. In 1900, 54 Pearl Street was threatened with demolition. The Daughters of the American Revolution with the aid of the Honorable Andrew H. Green, founder and president of the Society for the Preservation of Scenic and Historic Places (SRNY), came together to attempt to preserve 54 Pearl Street. They attempted to purchase the building for several years, but the owners refused.

However, the preservationists persisted, and when restoration was completed in 1907, the building was dedicated and opened as a museum and restaurant on December 4, the anniversary of Washington’s farewell address to his officers. The restaurant was managed by Emil Westerburg. By the 1960s, Fraunces Tavern developed to include four surrounding buildings. In 1965, 54 Pearl Street was designated as a New York City Landmark, and in 1977, the entire block was designated a Historic District on the National Register of Historic Places. After extensive research, the Long Room on the second floor of 54 Pearl Street, was re-interpreted and exhibited as a colonial urban tavern public room in 1981. The landmark exhibition “Taverns: For the Entertainment of Friends and Strangers” brought national attention to the museum.

The museum galleries are divided throughout the tavern and four other 19th century buildings on the block. Every gallery focuses on an aspect of early American history and culture in New York, such as art, maps, people, and other important features and artifacts. The art portion of the museum has a collection from the 19th century artist John Dunsmore, whose art portrays events of the American Revolution and the early Republic. Maps that define the lines and routes that began forming in America between the 18th and 19th century can be viewed in another gallery. Two galleries in the museum are dedicated to informing visitors about George Washington's strong political symbol during the 18th century as well as his farewell address held in the Long Room of the museum. Above the Long room, visitors can walk into a gallery dedicated to the history of SRNY, the group that was responsible for saving the Fraunces Tavern from destruction and creating the museum.

Guided tours are provided for any age through all available galleries, as well as performances and lectures on special days throughout the year. The Fraunces Tavern is a great place for educational field trips, guided tour programs for elementary schools, and self-guided programs for high school and college level students and adults. When touring all of the galleries, visitors can do as the founding fathers did 200 years ago and enjoy a pint and a meal in the tavern restaurant.