This monument was dedicated at Arlington National Cemetery in 1990 to honor the 3rd Infantry Division. From its beginnings in 1917 to the division's support in the Korea war, the division fought in a total of 24 campaigns, 10 of which were during WWII. The 3d Division was organized at Camp Greene, North Carolina on 23 November 1917 and continues to be active with soldiers deployed to Iraq and Afghanistan in recent years. Every unit within the division was in France by March 1918, and the division entered combat in May. On July 15, the division distinguished itself in defense of the Marne River at Chateau-Thierry, forty-five miles northeast of Paris. This action earned the division the proud motto, "Rock of the Marne." The 3rd Infantry Division fought with distinction in World War II, participating in four amphibious landings in North Africa, Sicily, Italy, and France. The Division played a crucial role in the defense of South Korea. It returned to Germany in 1957 as part of the NATO Defense Force and was still serving in that nation when the 3rd Division Memorial was dedicated on August 15, 1990. From the first World War to Korea, 11,120 members of the 3rd Infantry were killed in battle and another 41,000 were wounded or recorded as MIA (Missing in Action). 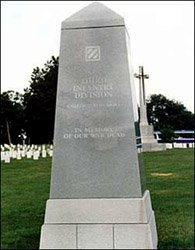 The 3rd Infantry Division monument was approved by President George Bush on September 29, 1988, and was part of Public Law 100-456. The monument was dedicated on August 15, 1990. The memorial is located on the right (north) side of the curved part of Memorial Drive near the Canadian Cross and the Challenger Memorial. The nine-ton gray obelisk is several feet behind a historical marker that offers a brief history of the division. The bronze and stone marker lists battles fought by the 3rd Infantry. World War II Medal of Honor recipient Major Audie Murphy, a member of the 3rd Infantry, is buried along the flagstone walkway in section 46 on the left (south) side of Memorial Drive.

The division has a long history and was home to the most decorated soldier in World War II, Lieutenant Audie L. Murphy. The 3rd Division (later re-designated as the 3rd Infantry Division on August 1, 1942) was organized at Camp Greene, North Carolina, November 21, 1917. The division was composed of the 4th, 7th, 30th, and 38th Infantry Regiments, the 10th, 18th, and 76th FA Regiments, and the 6th Engineer Regiment, with a total of 28,000 men. It underwent training at Camp Green, North Carolina and Fort Bliss, Texas, and shipped to France, arriving in April 1918. The division earned the designation “Rock of the Marne” at the Marne River near Chateau-Thierry on July 15, 1918. When flanking units retreated, then Division Commander, Major General Joseph Dickman, told our French Allies “Nous Resterons La” (we shall remain here). This motto is on the 3rd Infantry Division’s distinctive insignia.

During WWII, the Division was credited with 531 combat days which was the most combat days of any unit in the European Theatre. The 3rd Infantry Division fought in places like Casablanca, Anzio, Rome, the Vosges Mountains, Colmar, the Siegfried Line, Palermo, Nurnberg, Munich, Berchtesgaden, and Salzburg. The 3rd Infantry Division was the only U.S. unit that served in all 10 campaigns of the war, participated in four amphibious landings, and suffered the most casualties of any U. S. unit in the theatre.

Early in the Korea Conflict, General MacArthur specifically asked for the 3rd Infantry Division for his Far East Command. The Division became known as “The Fire Brigade” for quickly moving up to cover breaks in the UN lines. On one cold and stormy night in May 1951, the division was given orders to disengage on the east coast and move all the way across Korea to stop a major enemy breakthrough in the west. No one thought it could be done, including the officers who gave the order. The officers and men of the 3rd Infantry Division loaded onto trucks, and 30 hours later, they engaged and stopped the advance of the large hostile force. The Chinese were amazed. They were fighting and losing to the 3rd Infantry Division, which they thought was still on the east coast.

The 3rd Infantry Division would be called again and again, during the Cold War, Vietnam, the Gulf War, and Afghanistan. With the close of combat operations in Iraq, the 3rd Infantry Division moved on to Afghanistan and continued combat operations and training missions (advise and assist) to prepare the Afghan Army and police to take over responsibility for security in a very difficult theater of operations. The division and aviation brigade then redeployed to duty stations in the U.S. Soon after, the Third Division again answered the call to arms with units deployed to hostile territory in Afghanistan. These soldiers advise and assist missions train and prepare the Afghan Army and security forces to take, hold, and occupy large areas of their nation.