The Museum at Prairiefire

The Museum at Prairiefire offers a variety of unique interactive displays that bring natural history alive. In fact, the museum begins with an exhibit that makes it appear as if dinosaurs were still alive. The museum has partnered with the American Museum of Natural History to offer exhibitions and educational programing for adults and children alike.

As the only building in the United States to feature Dichroic Glass developed by NASA, the Museum at Prairiefire’s exterior is as unique as what it holds inside. 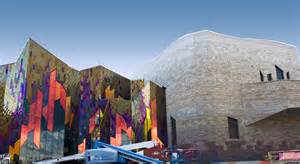 The Museum at Prairiefire (MAP) was established in 2010 and opened in 2014. It is the educational centerpiece of Prairiefire, a 58-acre mixed-use project that integrates residential and retail space with restaurants and entertainment. Guests to the museum enter the Great Hall where they are greeted by a cast of the Tyrannosaurus Rex discovered by Kansas native Barnum Brown. The Great Hall also includes rotating exhibits and an interactive display where dinosaurs come alive through augmented reality. For those who purchase tickets, the Discovery Room engages children 3-12 years old with exhibits and programs in the natural sciences. Children and the adults that accompany them can assemble a Prestosuchus, a life-sized cast of a Triassic reptile and dig up fossils in a re-creation of a paleontology field site among many other activities and resources.