“La Crucifixion de Don Pedro” was painted in 1971 by three community artists: Mario Galan, Jose Bermudez, Hector Rosario, and was commissioned by the Puerto Rican Arts Association. It is the oldest Puerto Rican mural in the city. The mural shows Don Pedro Albizu Campos being crucified between Lolita Lebron and Rafael Miranda. Campos was the Vice President of the Puerto Rican nationalist party, which fought for Puerto Rican Independence. Lebron and Miranda were also members of that party. The fact that Campos is shown between the two of them symbolizes that he was revered as a martyr for the Puerto Rican independence movement. As a result, the mural seems to be paying tribute to those who died for the nationalist cause. The mural is publicly accessible and is located in the Humboldt Park neighborhood of Chicago on 2425 W. North Avenue. 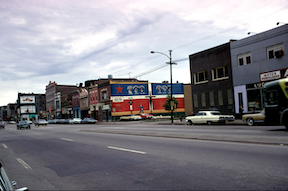 In order to understand the mural, the historical circumstances in which it was commissioned during should be understood. On July 23, 1971, Cuba announced to the United Nations that it would, according to an article that appeared in the Chicago Tribune: “call for a debate on the issue of Puerto Rican independence at the annual session of the General Assembly starting in September”.1 The chief Cuban delegate to the U.N., Dr. Ricardo Alcaron Quesada, claimed that: “the U.N. committee on decolonization had done nothing about freeing the Puerto Ricans from the United States rule”.2 Although the U.N. ultimately rejected to take on the debate about the status of Puerto Rico, the fact that the issue was even suggested by another country to appear before the U.N. in the first place shows the extent to which the Puerto Rican independence movement was being discussed. As a result, “La Crucifixion de Don Pedro” can be seen as both an embodiment and being prompted by this debate.

Due to the fact that the Puerto Rican Nationalist struggle is so central to Puerto Rican history, “La Crucifixión de Don Pedro” is an important symbol for Puerto Ricans in Humboldt Park and the surrounding area. When the mural was originally painted in 1971, many residents of Humboldt Park were plagued with problems, like unemployment, and the mural came to be a symbol of community unity and pride.4 The mural today still bears great importance in the community.

As explained by Ray Quintanilla, a staff reporter for the Chicago Tribune, Humboldt Park is a neighborhood where: “some residents still drape the Puerto Rican flag from their windows and greet each other in Spanish”.5 Humboldt Park clearly exudes nationalist pride for Puerto Rico and the mural clearly embodies this pride. In recent years, as Quintanilla addresses, the neighborhood has changed and “newcomers who know little about the mural's history have flocked to the area”; however, he continues, the mural “has remained an important symbol for Puerto Ricans in the Northwest Side community”.6 In 2001, as summarized by the Puerto Rican Cultural Center, a developer attempted to construct a condominium building that would block the sight of the mural” which sparked protests throughout the community.7 In fact, the alderman of the community threatened to chain himself to a construction machine if the project did not end, thus falling in line with the mural’s theme of martyrdom. After a long fight, the city finally regained the land in 2007 when a restoration effort began.8 One of the original artists of the mural, Mario Galan, worked on the restoration team, ensuring that the integrity of the piece was kept intact.9 The massive protests that the attempt to obscure the mural prompted and the subsequent restoration effort show the extent to which the mural is a community symbol.

Ultimately, “La Crucifixión de Don Pedro” pays homage to the martyrs of the Puerto Rican Nationalist struggle through its depiction of Don Pedro’s crucifixion and is viewed as a symbol of pride within the Humboldt Park community. Although debates surrounding Puerto Rican independence are declining, the mural is still a deeply important historical image. Humboldt Park is in the process of gentrification and, as a result, there are new residents who do not understand the significance of the mural; however, to those who do, it exudes nationalist pride.