This station was built to serve passengers along the Pennsylvania Railroad by John C. Horsey who named the station after his daughter Marion. With increased use, the name "Marion Station" stuck and soon the community became known as Marion. At the time, Marion was the largest strawberry producing area in the world. Several nearby historic buildings have also been restored 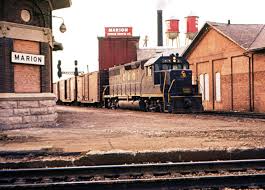