This is a contributing entry for Industrial Athens Digital Story Map and only appears as part of that tour.Learn More.

Throughout the industrial history of the United States, strikes have been a key tactic used by labor unions to attempt to improve working conditions and wages. Athens, home to the Athens Manufacturing Company was no exception during the 20th century. The General Textile Strike of 1934 was a major textile strike organized by the Textile Workers Union of America (TWUA) to enforce the new regulations implemented by the National Industrial Recovery Act. With around 170,000 workers in the south and 400,000 workers participating, this strike was the largest labor protest in the South’s history, and one of the largest organized strikes in US history. Lasting just under one month, this strike involved walkouts, the use of “flying squadrons” to drive in supplies and workers from other towns to support the strikers. Many Georgian workers participated in this strike, though as of now, there are no sources showing the contribution of Athenian workers. Then after the Second World War, Athenian mill workers of the Athens Manufacturing Company, with support from the TWUA, began the longest strike in American history lasting from August 29, 1945, to March 11, 1947. This strike eventually became part of a larger Southern union movement called Operation Dixie, which aimed to, “Transform the region’s political climate,” and maintain the gains made for union organization before and during the war and received support from returning veterans. The TWUA called off in March of 1947 due to the company’s refusal to negotiate. 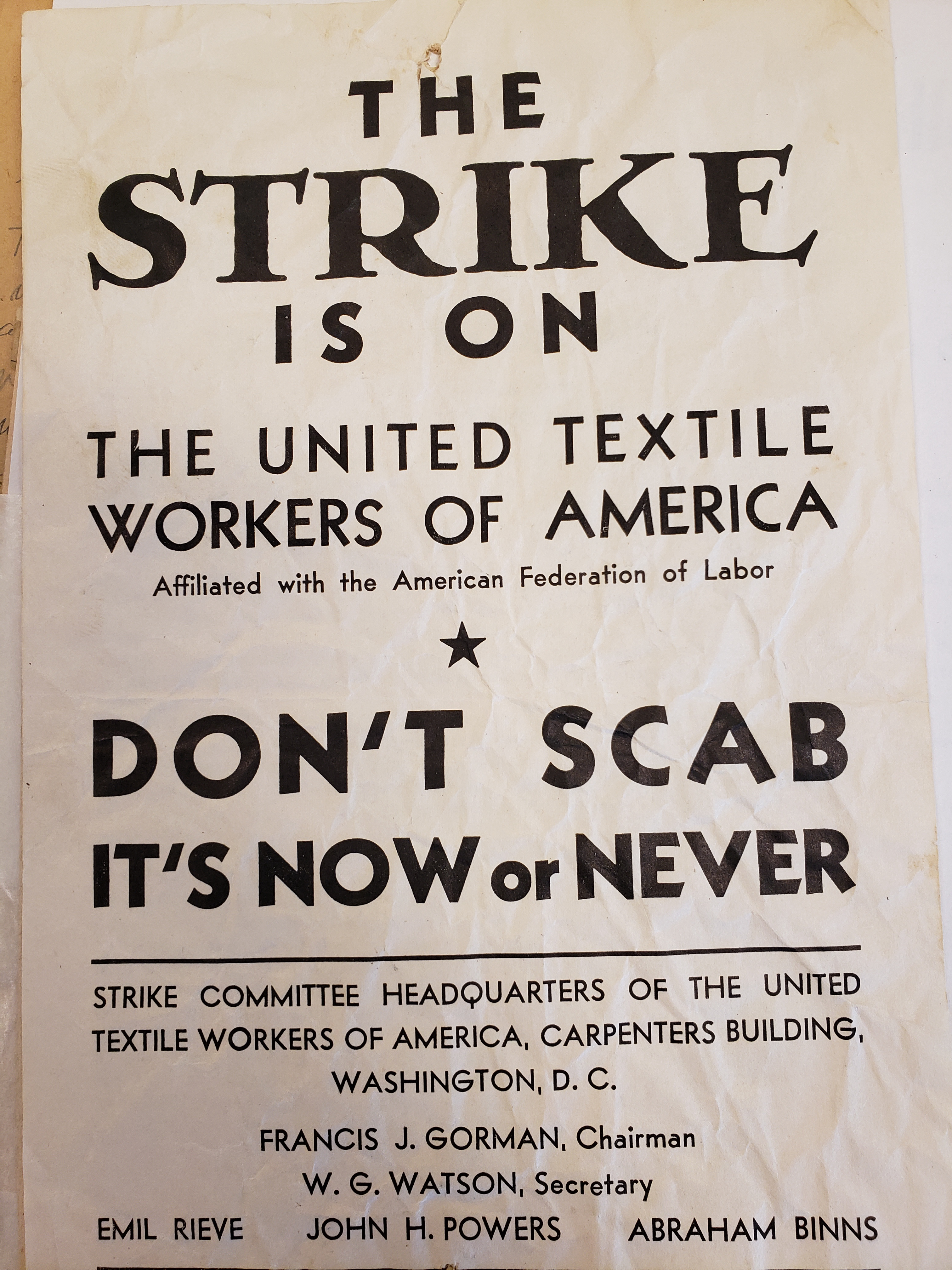 By the beginning of the 1930s, textile workers were among the most depressed and lowest paid of the working class in the country. After the First World War, The United States entered an industrial depression, and the Great Depression only made matters worse. To compensate, the textile manufacturers cut the wages of their workers. In 1932, the average southern male textile worker earned roughly twenty-six cents per hour with an average of 50 hours per week with women in the same position earning around

twenty-one cents an hour. Adjusted for inflation that would be around $4.87 an hour and $3.94 an hour respectively as of 2019, about one-third of what a textile worker today earns. For most of the industrial history of the USA, the government has mostly legislated in favor of the businesses at the expense of the workers. Oftentimes the worker’s ability to join a union was restricted, sometimes even forbidden by his or her employer, which Washington generally ignored, and past attempts to organize and strike were put down violently.

In 1933, the Democratic majority Congress passed the National Industrial Recovery Act (NIRA) and established the National Recovery Administration (NRA) to revitalize the economy. Section 7a which gave industrial workers the rights of collective bargaining. Hailed by some as an emancipation proclamation of workers, the enacting of this law sparked a surge of optimism throughout the textile industry. For a brief period afterward, production increased by 120% of the average during the 1920s and union membership increased dramatically. However, this optimism was short-lived. It soon became clear that the NRA was not properly enforcing the NIRA as many workers were still being paid below the minimum wage, and mill owners were still laying off workers associated with the UTWA. During UTWA’s convention on August 13, 1934, they declared a general strike beginning on September 1.

Throughout Georgia and the rest of the South, the call for a general strike was strong. Workers were growing impatient with Roosevelt and the NRA’s unreliability and had even participated in minor strikes earlier in the year. Despite the UTWA’s hopes, clashes between strikers and law enforcement occurred across the state, most notably in Macon where police violently dispersed picketers who were disrupting the trains, and in Trion where a standoff between strikers and deputies escalated when one of the deputies fired into the crowd of strikers and fled into the mill.

Although then Georgia Governor Eugene Talmadge held anti-union beliefs, he initially did not respond to the strikes. He knew that a large number of his voters supported the New Deal, and his election for that year relied on him appealing to the Georgia worker. After many reports of violence across the state however, Talmadge declared martial law and sent in the national guard to suppress the strikers. The strikes died down shortly after. After the failure of the general textile strike of 1934, the TWUA merged with other

unions to form the Committee of Industrial Organizations (CIO) in 1935, and the Supreme Court declared the NIRA unconstitutional that same year. However, during the war, the labor unions came to a consensus with the federal government in which they would force businesses to recognize unions, and the unions would take a “no-strike” pledge to ensure the unhindered production of wartime munitions. As a result, Union membership drastically increased to nearly 15 million, and Georgia textile mills began production of military uniforms and parachutes.

As the war in the Pacific concluded so did the demand for military equipment, and textile workers lost a substantial amount of income. As a result of the Athens Manufacturing Company’s refusal to negotiate with the TWUA, the textile workers began their strike. All across the state workers in other large manufacturing towns, such as Macon and Rome, had also begun to strike. George Baldanzi, the executive vice president of the TWUA, claimed that around 45,000 workers were involved in the strike by September of 1945. By 1946, the CIO commenced Operation Dixie in an attempt to end the anti-union conservativism that had dominated Southern politics for decades. This strike received plenty of support from veterans of World War II returning from duty, who would not cross the picket line to work and joined the movement.

However, even after almost two years of striking, the Athens Manufacturing Company was still adamant in their stance. Despite an ultimatum in favor of the strikers and the order to rehire all strikers, the Athens Manufacturing Company refused to bargain with the strikers and only rehired 50 of the around 400 of them. On March 11, 1947, the TWUA called off the strike. All across the South, Operation Dixie slowly failed due to racial tensions between the black and white workers in the Jim Crow South and the loss of public support due to the Red Scare. Then in June that same year, Congress overrode President Truman’s veto on the Taft Hartley Act which, among other things, made closed-shop policies (businesses are required to only hire union members) illegal, allowed states to pass “right-to-work” laws, and forced union officials to declare their disassociation with communism, which set back labor advancements significantly and led to the decline of organized labor in the nation.

Staughton Lloyd, "We are All Leaders": The Alternative Unionism of the Early 1930s (Champaign, IL: Published by University of Illinois Press, 1996) 72.

Frances Perkins, Wages and Hour of Labor In Woolen and Worsted Goods 1932 (Washington D.C.: Published by the US Government Printing Office, 1933, Available from the University of Missouri Libraries, 2019)

Transcript of the National Industrial Recovery Act (uploaded by the National Archives and Recovery Administration) https://www.ourdocuments.gov/doc.php?flash=false&doc=66&page=transcript

John A. Salmond, The General Textile Strike of 1934: From Maine to Alabama (Columbia, MO: Published by University of Missouri Press, 2002) 26-9

Janet C. Irons, Testing the New Deal: The General Textile Strike of 1934 in the American South (Urbana: Published by University of Illinois Press, 2000)

Last updated by Evan Howell (Instructed by Cindy Hahamovitch, University of Georgia) on December 6th 2019, 6:19:28 am.