Off the intersection of Forrester and Bluff Road once stood the Bluff Street Bridge, on which Levi Harrington was hanged, tortured, and shot for no reason other than the color of his skin. Today, in what is known as the West Bottoms district of Kansas City, Missouri, stands a historical marker portraying what little is known of Levi Harrington and his final moments. Described as a “faithful… honest man,” Levi was an African American man who fathered five children with his wife and lived near Kansas City. 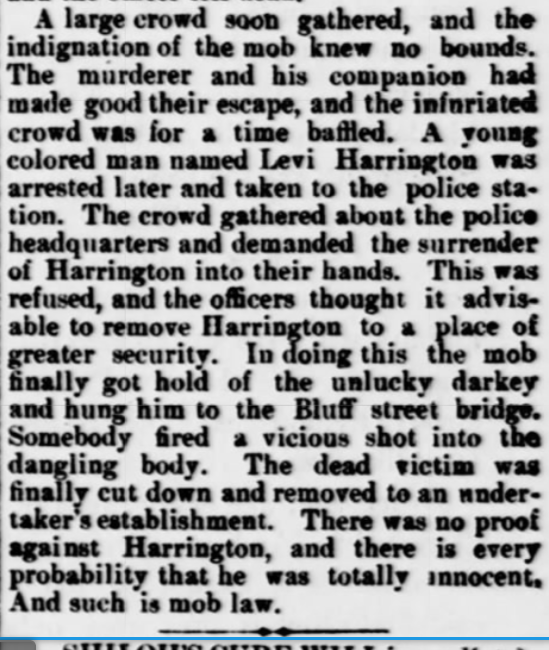 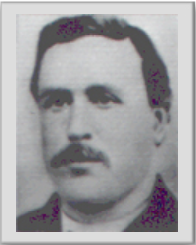 Historical marker in honor of Harrington 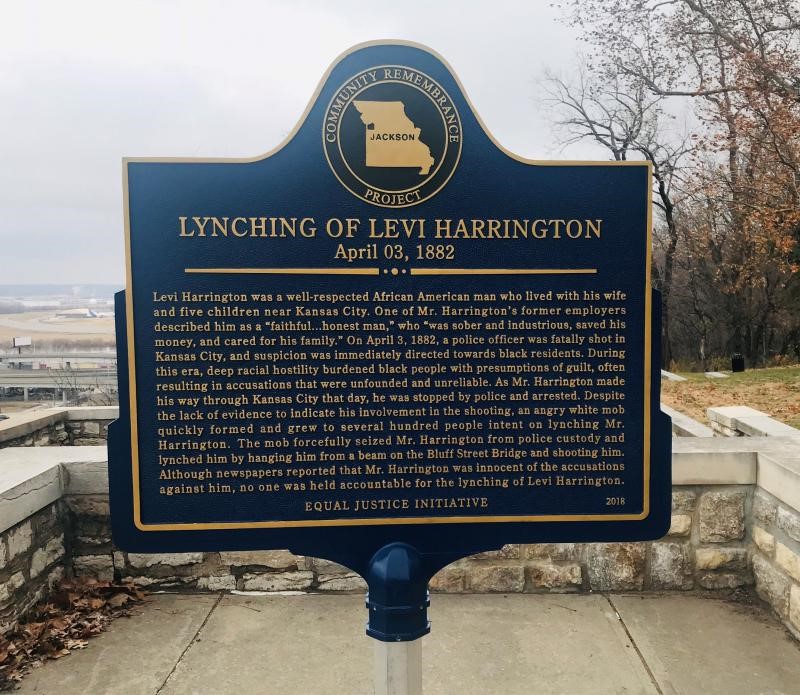 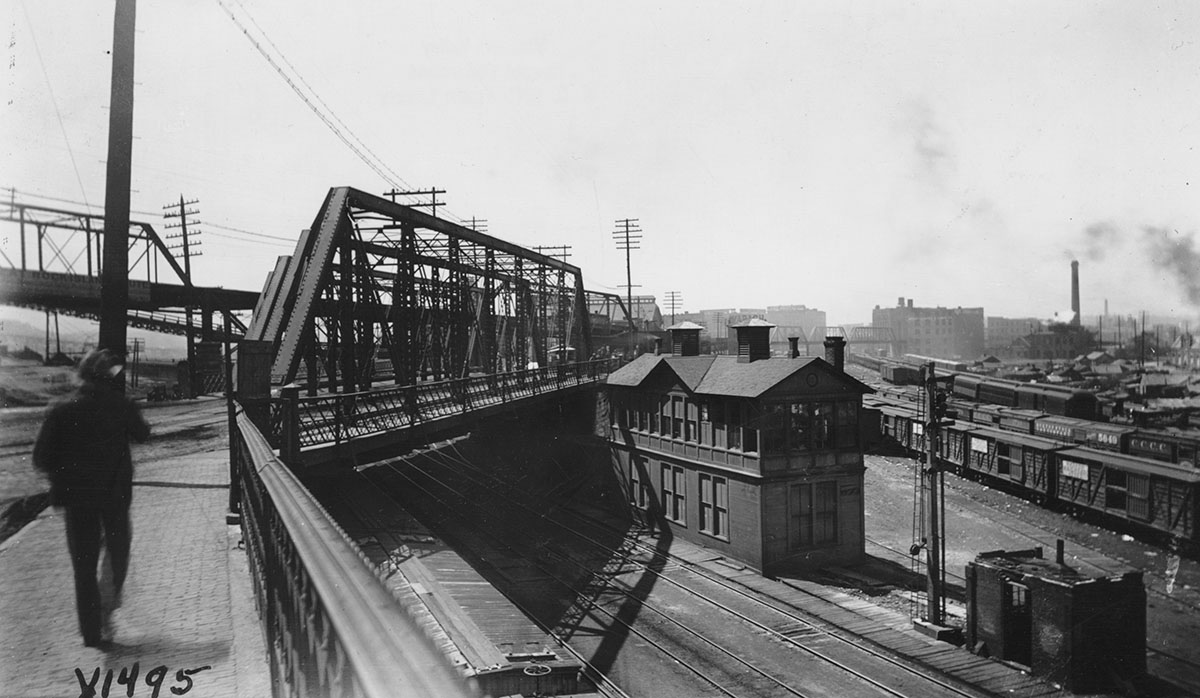 Postbellum America gave birth to the rise of white vigilantism specifically in the form of lynching African Americans. The late 19th and early 20th century, contained thousands of lynchings. Membership in the Ku Klux Klan was at an all time high (estimated to be around 5 million total members) in 1925. Like many other African Americans in the era, Levi Harrington of Kansas City was lynched with no crime other than the color of his skin.

On April 3rd, 1882 Kansas City police officer Patrick Jones responded to a report of three suspicious males. When Jones approached the group, they fled the scene. The officer gave chase but was shot and killed. An African American man by the name of Levi Harrington was making his way though town when he was stopped by Kansas City police. Just because of his presence in the area near the crime, and the color of his skin, Harrington was made into the prime suspect of the case and was arrested and taken to the police department for holding. As he was being held, a crowd began to form and demand he be handed over to them for proper punishment, which according to them was the death sentence. As the police refused and began to move Harrington to an area with more security, the angry mob forcefully took Harrington and took him to the intersection of Forrester and Bluff road where they hung him from a beam on the Bluff Street Bridge and tortured and lynched him and then shot at his dead body.

Harrington was found innocent the next day, when the true culprit was caught and put on trial. George Grant was tried 4 different times for the murder and eventually accepted a plea bargain that only locked him up for 2 years. Nobody from the lynch mob was tried or punished in any form. The true victim was Harrington, as was usually the case in most mob trials. The lynching of African Americans was common in Postbellum America, specifically in the early 20th century. The lynching of Levi Harrington went relatively unnoticed in terms of media coverage. Apart from a couple paragraphs throughout local newspapers, there was little to no talk about this incident. One newspaper specifically calls Harrington "the unlucky darkey" which just further illustrates the extent to which racism was intertwined, in this case it was visible in even the "objective" media. Regardless of how “Well-Respected” Levi Harrington was within the Black community, his fate helplessly fell to the angry white mob.

Despite the lack of memory, the people did not forget. Harrington’s lynching is remembered through a memorial plaque recently erected in the West Bottoms of Kansas City by collaboration between The Black Archives of Mid-America in Kansas City, the Missouri conference for the NAACP and other various organizations. The plaque was recently erected last year and was one of the first remembering lynching victims of Missouri. The story the plaque tells is trustworthy as every credible account of the situation has stated that Harrington was innocent in the killing of Officer Jones.

To conclude, the lynching of Levi Harrington was simply one of thousands around the country between 1877 and 1950. Despite the lack of evidence in most of these cases, white mobs continued to torture and kill Black people accused of crimes. This form of domestic terrorism was used to reestablish white supremacy even after the emancipation of slaves. Lynchings alongside Jim Crow laws in the south successfully delayed the civil rights movement and strengthened the racial hierarchy that was deeply rooted in America.

Hill, Karlos K. Beyond the Rope: the Impact of Lynching on Black Culture and Memory. Cambridge University Press, 2016.