St. Mary’s Mission, nestled in the Bitterroot Valley, was the birthplace of Catholicism in Montana. The mission is significant to the Catholic Church and the state of Montana because its establishment led to the inception of various Catholic missions throughout the region and the founding of Stevensville, Montana’s first permanent settlement. In 1841, a small group of Catholic priests, led by Father Pierre Jean DeSmet, established the St. Mary’s Mission in order to introduce Catholicism to the Salish Indians. After nearly ten years of successful proselytizing, a dispute between the Blackfeet and Salish Indians led to the Catholic Church’s destruction of the original mission. In 1866, the Church sent Father Ravalli to re-open the mission at a new location in Stevensville. Ravalli successfully led the Salish people back to the practice of Catholicism and introduced modern medicine to the community. Tragedy struck the mission again in 1891, when the Salish Indians were forcibly relocated by the federal government onto the Flathead Reservation in the Jocko Valley. This event ended the practice of Catholicism at the mission until the twentieth century. In 1921 the mission campus was re-opened and used until 1954 by the Catholic community in Stevensville. In 2010 the mission became a part of the National Register of Historic Places. Today, St. Mary’s Mission is a tourist destination in Western Montana. 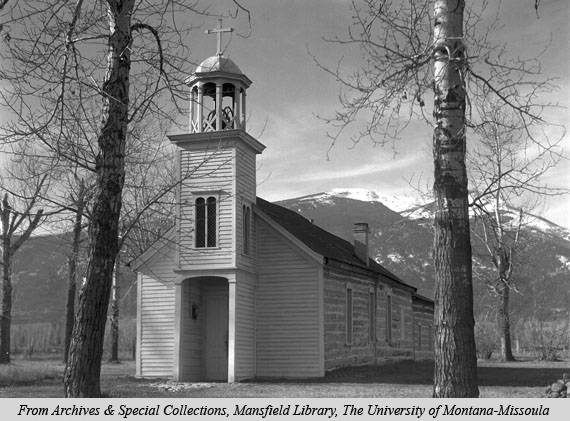 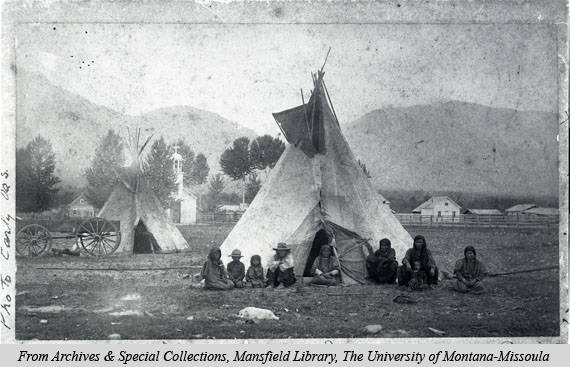 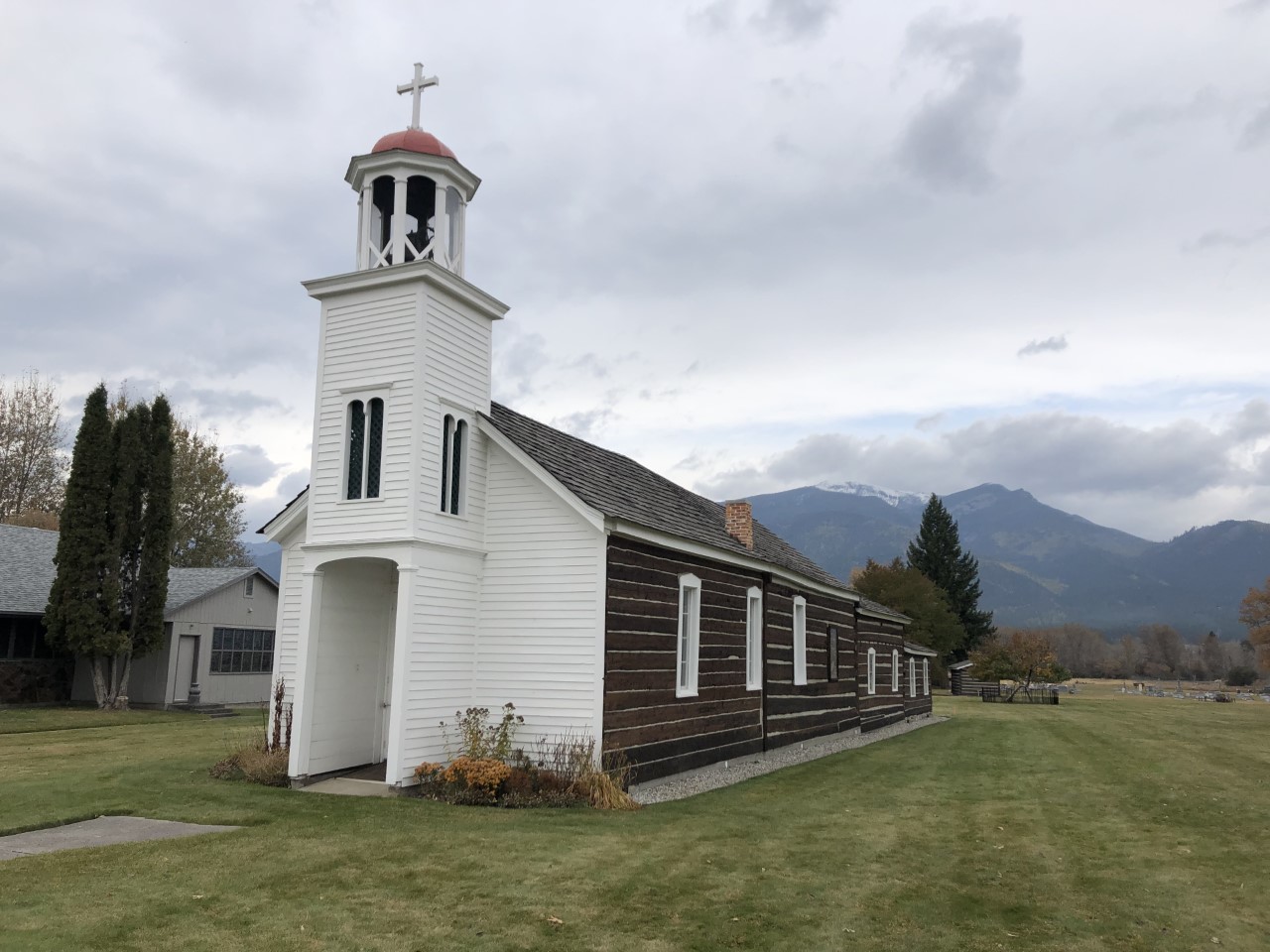 A view of the Bitterroot Mountains from the Mission grounds, October 2019 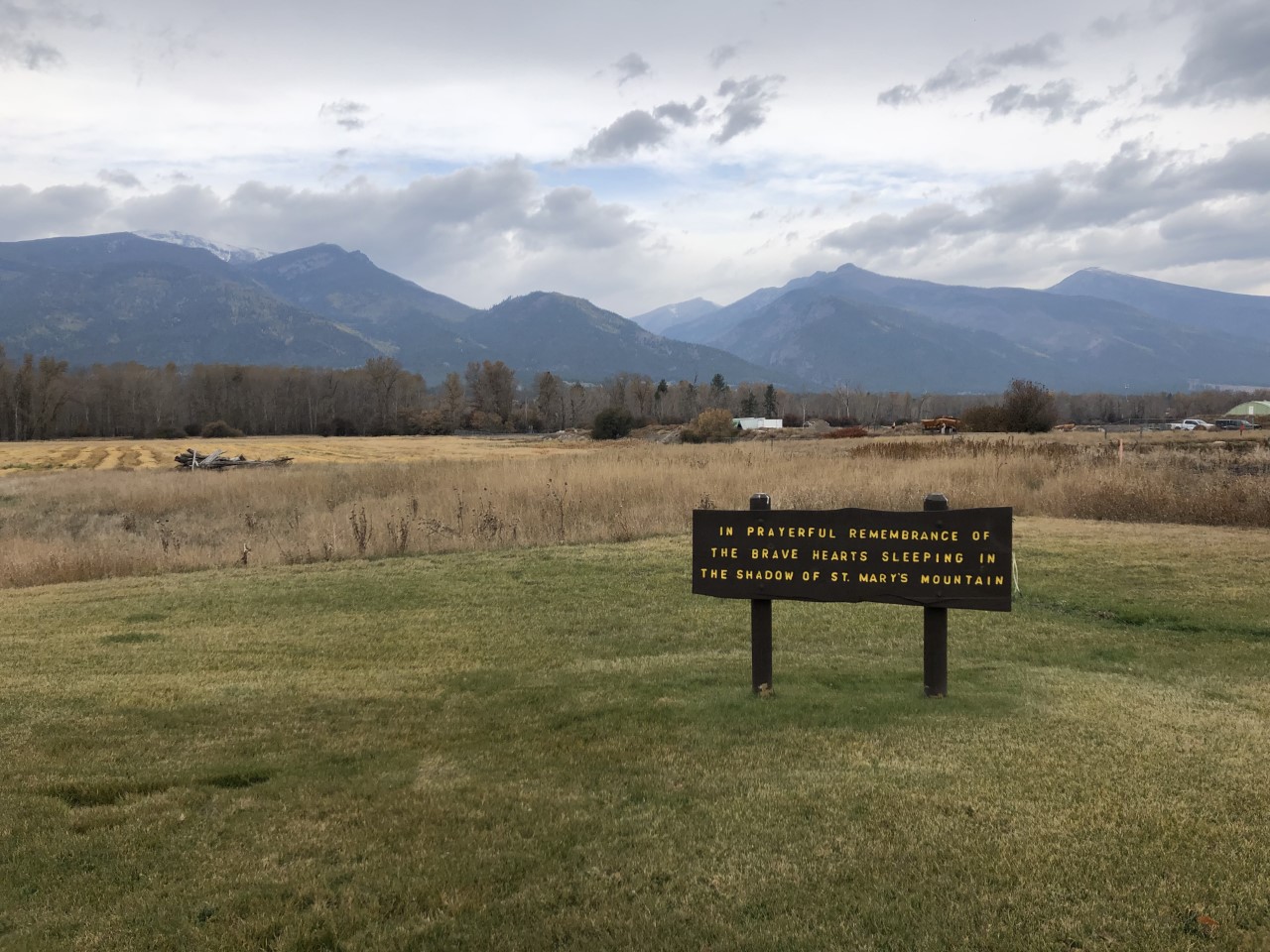 The historic pharmacy used by Father Ravalli to administer medications to residents in the area, July 1965 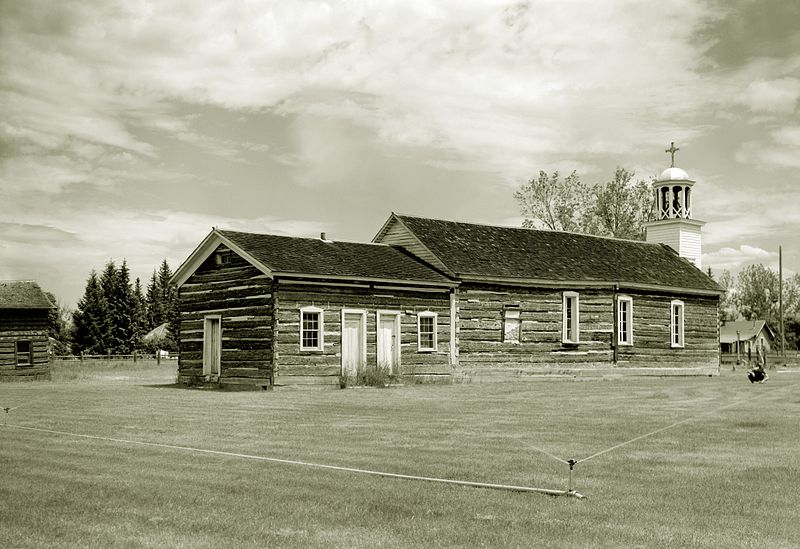 Starting in the 1840s, the Catholic Church began sending priests westward on mission trips to spread the word of Catholicism to settlers and Native Americans in the region. One of the most prominent of these missionaries was Father Pierre Jean DeSmet. “Pierre Jean DeSmet had long been associated with the vast Missouri-Platte, upper Great-Basin and Columbia-snake geographic complexes. Between 1840-1870 one might find him in almost any Indian village, baptizing or blessing children, instructing adults, or simply talking” (Antrei, p. 26). In 1840, DeSmet embarked on a westward trip from St. Louis, leading a group of Catholic missionaries. The most notable of the missionaries included Father Nicolas Point, a French priest and painter, and Father Gregory Mengarini, an Italian priest and linguist. During his time in Western Montana, Father DeSmet came to know and respect the Salish Indians, who were the predominant group that resided in the Bitterroot Valley. He proselytized the Catholic faith to them, and they were receptive to his teachings, because the Salish people believed power derived from spiritual belief. Historian Gerald McKevitt, explained, “the native peoples, who, like the Jesuits, believed that the supernatural world could be communicated with, valued and affirmed the power of prayer….One of the reasons why they invited the Black Robes to come among them was to learn their invocations and thereby acquire Christian power” (p. 55).

The Salish expressed their commitment to the Catholic faith, so Father DeSmet created the St. Mary’s Mission on September 24, 1841. Father DeSmet, Father Mengarini, and Father Point successfully planned and built the first structures of the mission. Point wrote in his journal,“when the hunters returned from their summer hunt, the cross was already elevated above the site of their future reduction, and their chapel was also rising. At the sight of the work going on, which had for the Indians all the interest of a novelty, and which promised so much for their future, there was a universal joy in the camp” (p. 41). The priests also introduced agricultural practices into the Salish’s traditional hunting and gathering survival techniques. In 1845, Father Ravalli joined his fellow Jesuit missionaries in the area and provided basic medical care to the Salish. In 1846, the Salish discovered that Father DeSmet had been sharing Catholicism with their enemies, the Blackfeet Indians. Father DeSmet attempted to bridge the divide between the two tribes; however, the attempt was ultimately unsuccessful. The Catholic Church consequently closed the mission in 1850 and sold the land to John Owen, an Army veteran. The Church burned the original mission structures down in order to “save it from desecration” (St. Mary’s Mission Website). Owen used the land where the mission previously stood to build Fort Owen and established it as a trading post in the valley.

In 1866, the Catholic Church decided to rebuild the Catholic community in the Bitterroot Valley and sent Father Ravalli to re-establish St. Mary’s Mission. He rebuilt the mission one mile from its original location, and expertly reinvigorated the Salish community’s practice of Catholicism. Ravalli continued to provide medical care as well as administer medication among the Salish and the community at large. However, in 1891, the federal government forcibly removed the Salish from their ancestral homeland and marched them onto the Flathead Reservation north of Missoula. This event ceased Native practice of Catholicism and caused the mission to close its doors once again. The Catholic Church re-opened St. Mary’s in 1921 and the congregation used the historic chapel until 1951. The congregation then built a new chapel, which is still in use today.

Currently, the mission’s campus includes the historic chapel, Father Ravalli’s original living quarters, Chief Victor’s cabin (which serves as a Salish museum), a reproduction of a Salish teepee camp, and the congregation's graveyard, where Father Ravalli is buried. As a visitor, you can participate in a tour of the mission from April to mid October and see the historic grounds.

Townes, Halle. " View of the Bitterroot Mountains From the Mission Grounds 2019". Digital Image, 2019.

This entry has been edited 28 times.