Constructed between 1917-1918, the Frederick J. Osterling Office and Studio served as an office space for one of Pittsburgh's prolific architects during the early-twentieth century. Constructed by Frederick J. Osterling (1865-1934), the building was listed under several historic databases and registers, such as the National Register of Historic Places (1985) and the Pittsburgh History and Landmark Foundation (2004) for its direct connection with Osterling and its unique Gothic Revival-Eclecticism design. Osterling was responsible for designing and constructing multiple banks, churches, industrial facilities, schools, houses, and courthouses within the Pittsburgh area. Osterling was inspired by various European architectural designs, such as the Gothic Revival, Neo-Classical, Beaux Arts, and Eclecticism. Some of his works included, the Heinz Company Factories, the Washington Courthouse & Jail, Allegheny High School, the Commonwealth Trust Building, and the Union Arcade (later known as the Union Trust Building). 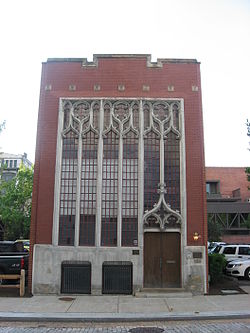 The Side of the Office and Studio

The Plaque Dedicating the Office and Studio as a National Landmark

Born on October 4, 1865 in Dravosburg, Pennsylvania, Frederick J. Osterling was the eldest son of Philip and Bertha Osterling. At an early age, the Osterling moved from Dravosburg to Allegheny County. After he finished his schooling, Osterling began working for local Pittsburgh architect, Joseph Stillberg. Osterling gained instant success as an architect by having a design American Architect and Building News at the age of 18, and at 19, he was commissioned to design a house for his father’s lumber business partner. Afterwards, Osterling traveled abroad to Europe to study the continent's architecture and was inspired by the Gothic Revival, Neo-Classical, Beaux Arts, and Eclecticism styles.

When returning to Pittsburgh, Osterling began designing and constructing buildings, industrial facilities, banks, churches, courthouses, schools, houses, and residences. Some of his best works include the Heinz Company Factories (1889), Bell Telephone of Pennsylvania Building (later used as the Verizon Building) (1890), the Washington Courthouse & Jail (1899-1900), Washington Trust Building in Washington, Pennsylvania (1902), Allegheny High School (1904), the Commonwealth Trust Building (1907). His most significant work was the construction of the Union Arcade (later renamed the Union Trust Building) between 1915-1917. After the Union Arcade, it was speculated that Osterling wanted to erect an office of his own as a "test" project for experimenting with terra cotta Gothic motifs, which he implemented in the Union Arcade.

Between 1917-1918, Osterling completed construction of the office-studio. The lot was originally occupied by a building once owned by Osterling's father between the 1870s-1890s for his lumber company. The building harks back to the designs of the Union Arcade, such as the Gothic and Eclecticism elements in the facade. By combing both styles together, the building was considered a beautifully unique and symmetrical establishment at the time; its deigns were progressive and different compared to Osterling's works and other buildings in the surrounding area. The building included compact offices and drawing rooms for Osterling and his assistants.

After his death on July 5, 1934, Osterling's properties and estate all went to his siblings since he was unmarried and childless. However, the will was contested by Martha Aber, a woman who claimed to be Osterling's "secret wife."Aber took her case to the Supreme Court, who ruled against her in 1940. The Court believed she pulled the stunt to claim Osterling's pension instead of the lump sum he apparently bequeathed to her before his death. Later, it was discovered the Frederick J. Osterling Office and Studio had a secret "love nest" apartment in the basement of the establishment.

The Frederick J. Osterling Office and Studio has been listed in some national registers and databases, such as the National Register for Historic Places (1985) and the Pittsburgh History and Landmark Foundation (2004) for its direct connection to Frederick Osterling, its contribution to architectural designs of early-twentieth century Pittsburgh, and its unique Gothic Revival-Eclecticism deign. Currently, there is a National Register of Historic Place plaque on the side of the building, which dedicates the building as a historical landmark.