This three-story building was built in 1894 for the Nebraska Telephone Company and is believed to be the first purpose-built structure designed to hold the heavy equipment needed to operate a telephone exchange. The Renaissance Revival style building housed the Lincoln Telephone and Telegraph Company from 1912 to 1927. The structure was later home to many area businesses. The building was added to the National Register of Historic Places in 1978. The building's facade includes alternating lotus and palmette, a design that was also used in the Acropolis in Greece. The ground floor is now occupied by the Francie & Finch Bookshop. 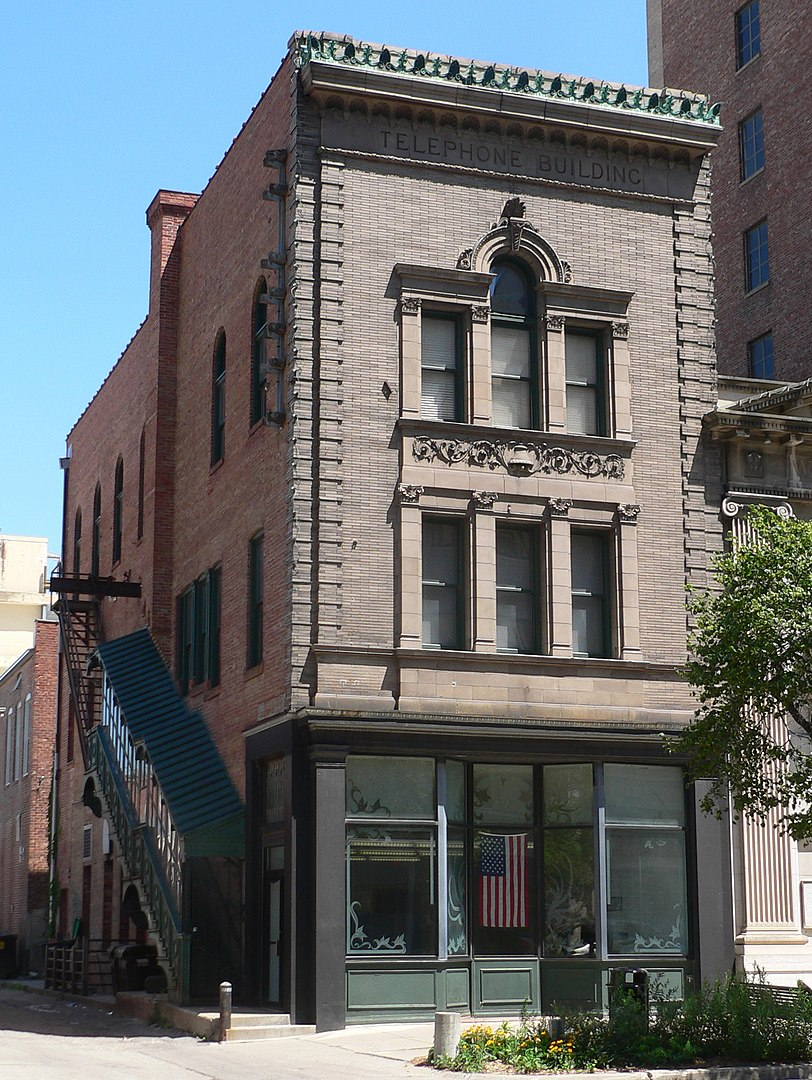 The Nebraska Telephone Company Building is three stories tall over a basement. The ground story is composed of cast iron with a simple classical motif spanning the width of the front of the building. The upper stories are St. Louis pressed brick topped by a terra cotta entablature and wall cornice, under a copper free-standing anthemion motif. This motif featuring of alternating lotus and palmette is shared by the Acropolis in Athens, Greece. The second and third floor facades also feature ornate designs such as a terra cotta panel featuring a bell (a symbol of the phone company) and floral motif underneath a palladian window.

The building is said to be the first building built in Lincoln as a telephone exchange. The sturdy design was meant to hold the heavy loads from telephone equipment within a fire-resistant structure. Lincoln was the second town in the state to receive telephone service, in 1879. The Nebraska Telephone Company incorporated in 1882. The prominent Omaha architect for this new building on S. 13th Street was Thomas R. Kimball, who also was a son of the company founder.

Lincoln Telephone and Telegraph Company (L. T. & T.) became the solo provider of phone service in southeast Nebraska. The company served homes and businesses south of the Platte River, and in 1912, this building was acquired by the company. L. T. & T. was founded in 1903 as the Lincoln Independent Company. The Nebraska Telephone Company continued to provide telephone service north of the Platte River based on the two company's 1912 agreement. L.T. & T. already had a building nearby in downtown Lincoln, at 231 S. 14th Street, so this building was used by their commercial department. By 1927, the company decided that the 13th Street building was no longer needed. After the phone company sold the building, it was leased to many businesses over the years.

In 1978, the building was listed on the National Register and represents the early communications industry in the state. The building is the only survivor of two in Lincoln known to have been designed by Kimball. The other, the University of Nebraska's Administration Building, built in 1903, was demolished in the 1960s.

The Nebraska Telephone Company Building shares a block with a modern drugstore across an alleyway to the north; and the 1916 Woods Brothers Building which is also listed in Clio. There is also an early-twentieth century skyscraper to the south. The tenant on the ground floor since 2016 is Francie & Finch bookshop. Besides children and adult fiction and nonfiction books, the store displays art by local and national artists and holds special events like book signings and writing workshops.

This very short walk includes a variety of historic landmarks including the governor's house, the State Capitol, the Ferguson House, the Kennard House, and several commercial buildings along O Street such as the Woods Brothers Building and Nebraska Telephone Company Building.