This family project is valued for its creativity with nature. The Tropical Treehouse in Rincon is a site for ecotourism and incorporates three guest cabins known as "Sunset Hooch", "Buddha Hooch" and "Luna Hooch". It is a natural location where visitors can stay in eco-friendly outdoor cabins made of wood and bamboo. Viewing platforms from the top of the structures offer panoramic views of the surrounding natural environment. All of the construction materials are natural, water comes from a spring and lighting is sunlight. As the island's ecotourism industry increases, this concept may provide the template for other natural guesthouse initiatives. The tropical tree house is a family-owned for-profit organization that potentially indicates future drections for the island's tourism industry that has heavily influenced and continues to define the islands recent economic history.

Main house in Tropical Treehouse, when Joe Scheer and his family made it their home in 1992. 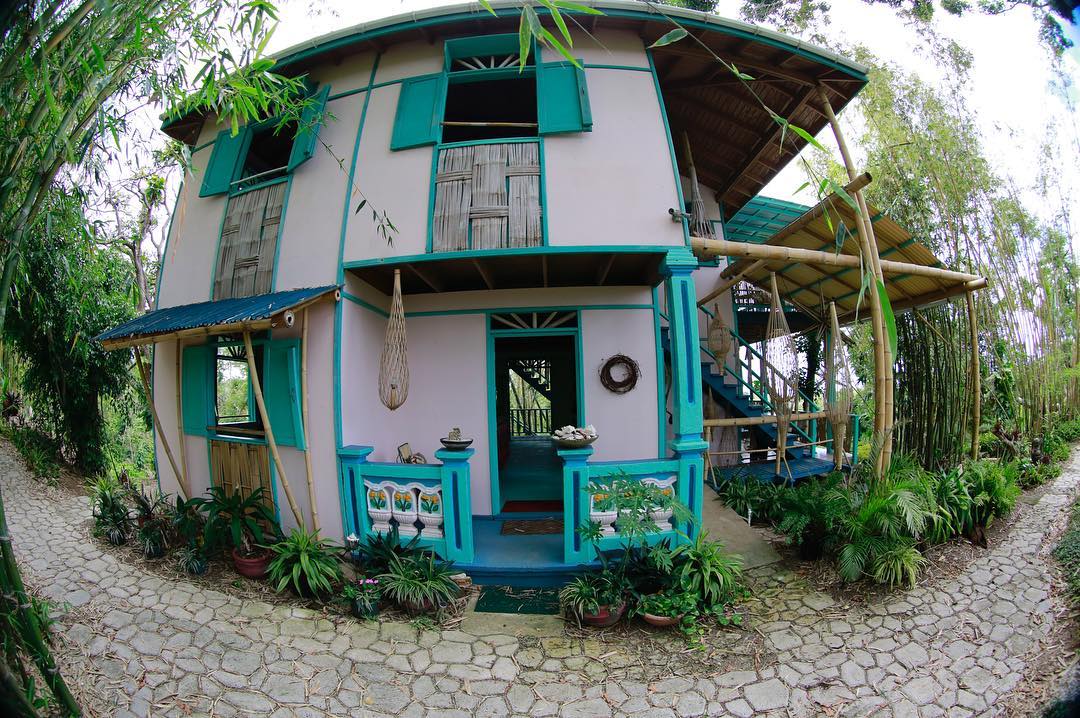 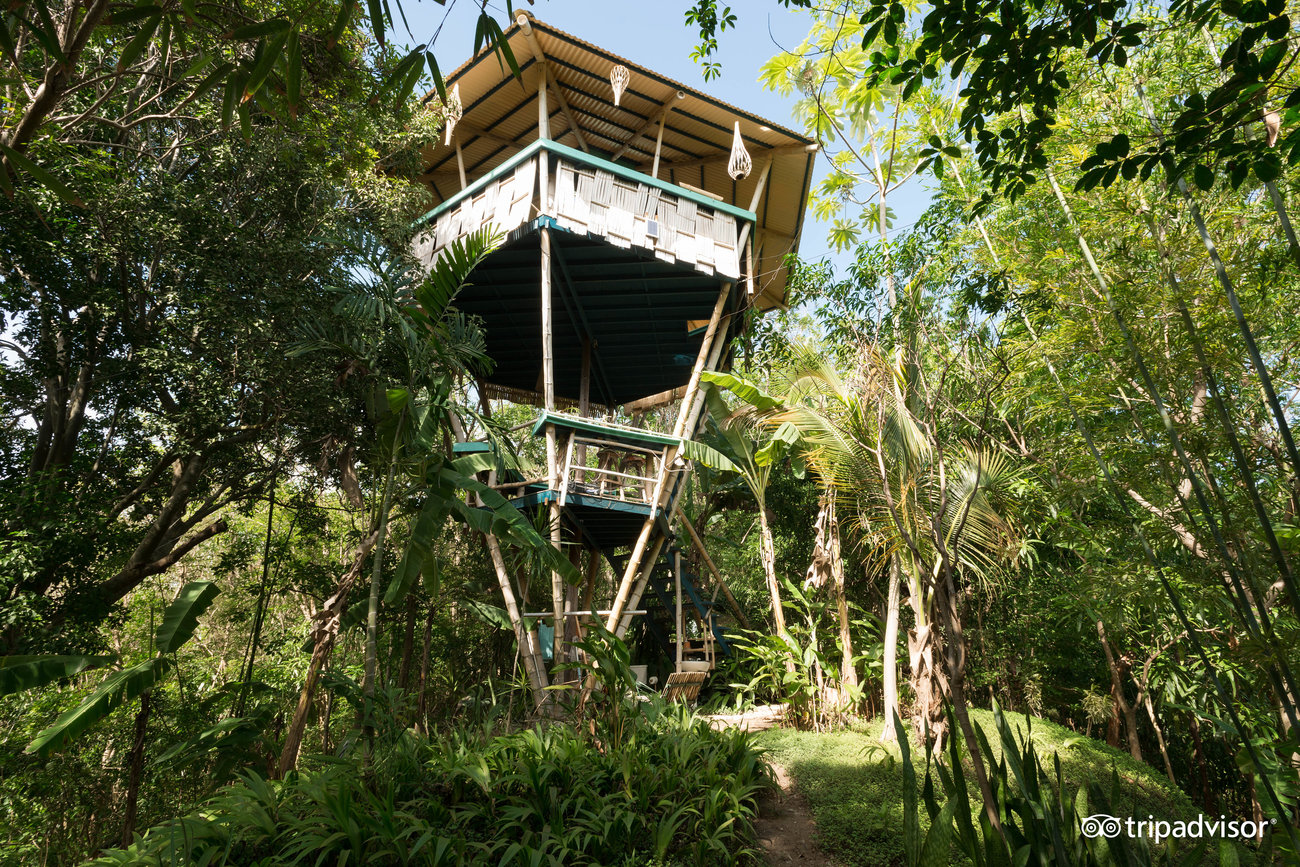 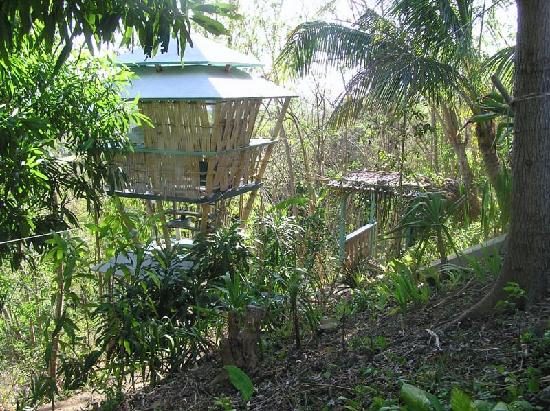 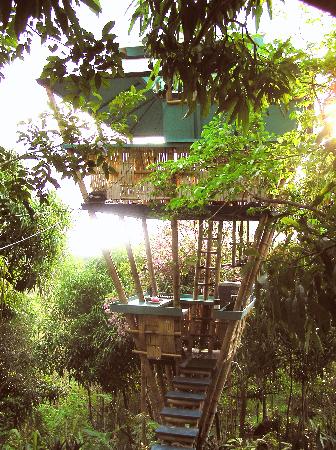 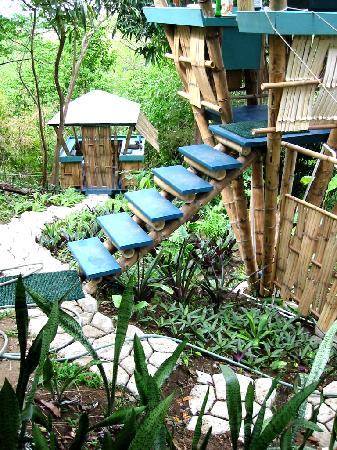 View towards the vegetation and the beach from the top floor of the Hooch cabins. 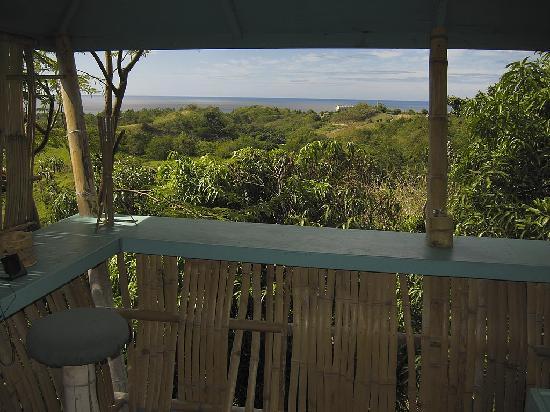 On the west coast of Puerto Rico, Joe Scheer and his wife Laura establihed a creative a concept of hospitality among nature. In the mountains of Rincon, they found an ancient structure that was almost consumed by vegetation which they bought and made their home. In 1992, the idea of the Tropical Treehouse as ecotourism began with the creation of the "Hooch" cabins, guest structures that are made from different types of bamboo.

In an interview for a national newspaper, Scheer explains how the idea of the Tropical Treehouse began because he was seeking a warmer climate than Wisconsin in winter. He came to the Caribbean for the first time with a University friend who was from Vieques, and then he lived in St. John for two seasons before buying land in Rincon, Puerto Rico [1]. Scheer was a science teacher in SESO (the Southwestern Educational Society) in Mayagüez and later gave classes for the Geology Department of the Univeristy if Puerto Rico in Mayagüez. Yet his passion for carpentry and architecture, specifically working with wooden architecture and bamboo structures, led to the creation of the Tropical Treehouse, a space located away from urban areas and very close to nature. The Tropical Treehouse is a non-traditional hotel. It consists of 3 bamboo cabins with an ecological structure, that is, each cabin is separated by vegetation. Which makes it different from older and more traditional hotels on the island. In addition, the Tropical Treehouse encourages all its guests to protect, care for and enjoy nature.

Hooch cabins are made of different types of bamboo and wood. Each one is built from a central point where the bamboo connects. The structure maintains its balance with the tensioners that are tied to the trees. The structures are secure and take advantage of the versitility of the material for ecological housing; "Bamboo can be used to generate a large number of components that can be used in almost all areas of everyday life." [2] Each cabin is made up of three floors: the first level is the entrance, the second level is the kitchen that is equipped with stove, counters and a sink and finally, at the top is the room with a queen bed with mosquito net and various wooden items of furniture. None of the structures need windows as the wall space is either fully or partially open. Sunlight is used to illuminate the structures by day, and at night, a bamboo lamp is used. They owners operate a solar heater and the water is recycled from the rain.

The Tropical Treehouse is an nature-oriented hotel which aligns with the ideals of ecotourism to plan sustainable ways to maintin the diverse practices and modalities of tourism for present and future generations. Visitors can experience the location and also learn about natural habitat that surrounds it. At the Tropical Treehouse, the owners focus on the care of natural resources as a part of the economic activity generated in the rural area. They manage 13 acres of land on which there are more than 35 types of bamboo, native trees of Puerto Rico and a variety of fruit trees. Guests are encouraged to walk through the lanscape and learn about the types of trees as they enjoy nature. Bringas Rábago and Ojeda Revah explain in their article on ecotourism:

Today, tourists seek to obtain new experiences and personal experiences by visiting unknown places, rural areas and practicing different activities outdoors and in a natural environment; for this reason, the alternative model seeks to differentiate the product from other places. [3, translated from original Spanish]

In conclusion, the Tropical Treehouse is a unique concept in ecotourism on the island due to its completely natural construction and sustainability. The hotel concept potentially indicates future drections for the island's tourism industry and suggests economically productive way to re-purpose wood and bamboo. Its owners strive to protect nature and educate visitors in sustainable ways to meet their basic needs such as making use of the sun for lighting and the rain for bathing.