St. Mary's School was established by German immigrants in 1857, eight years before the parish was founded. The first St. Mary's Church was built at Merrill Avenue and Marquette Street in 1866. The Congregation of Sisters of St. Agnes began teaching at the school in 1879. In 1974, St. Mary's School merged with St. Joseph's School and the school was renovated into an apartment building. The church underwent a major renovation in 2016 and is part of the Holy Family Catholic Community.

Old St. Mary's School with the new school building in the background, 1949. 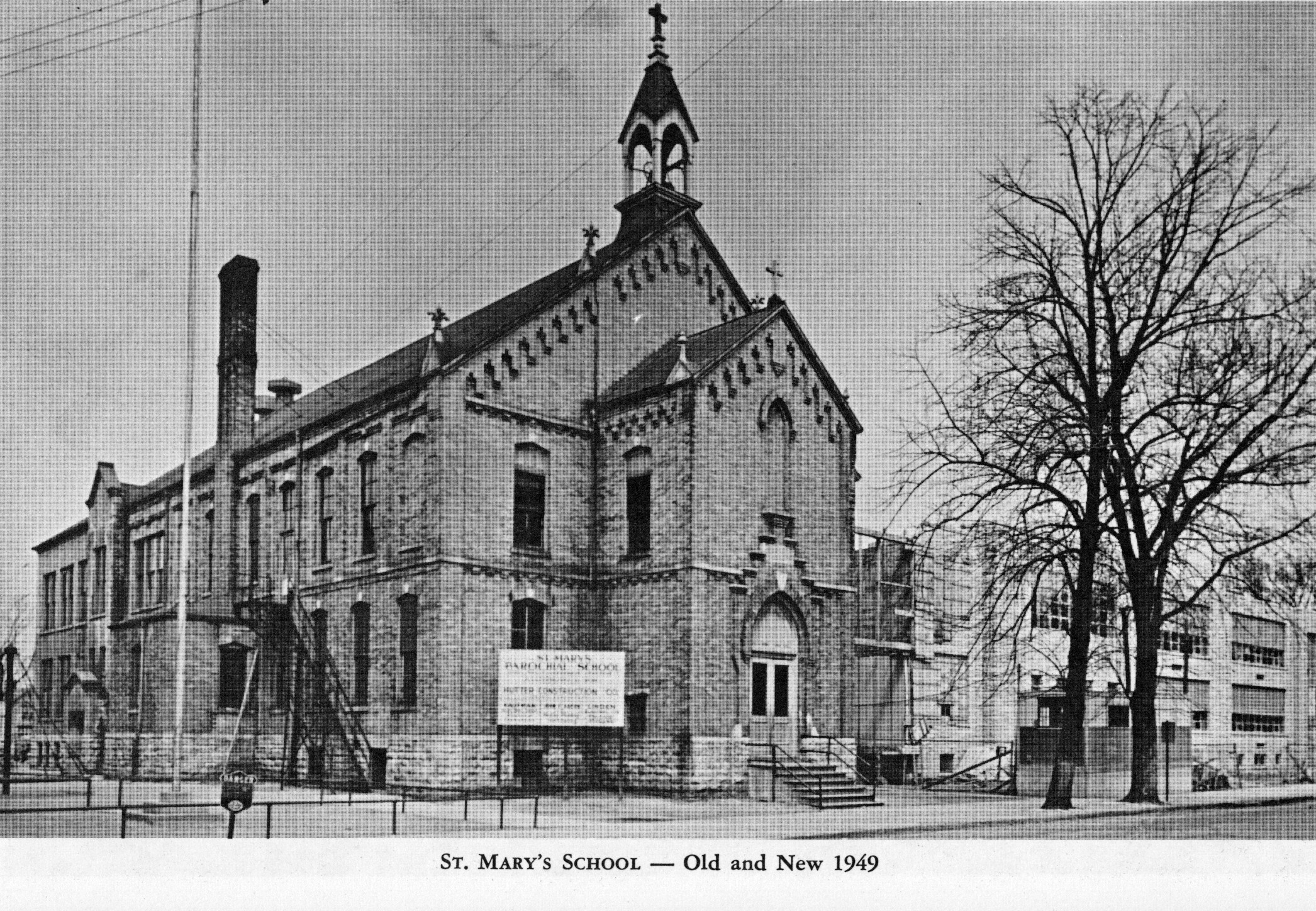 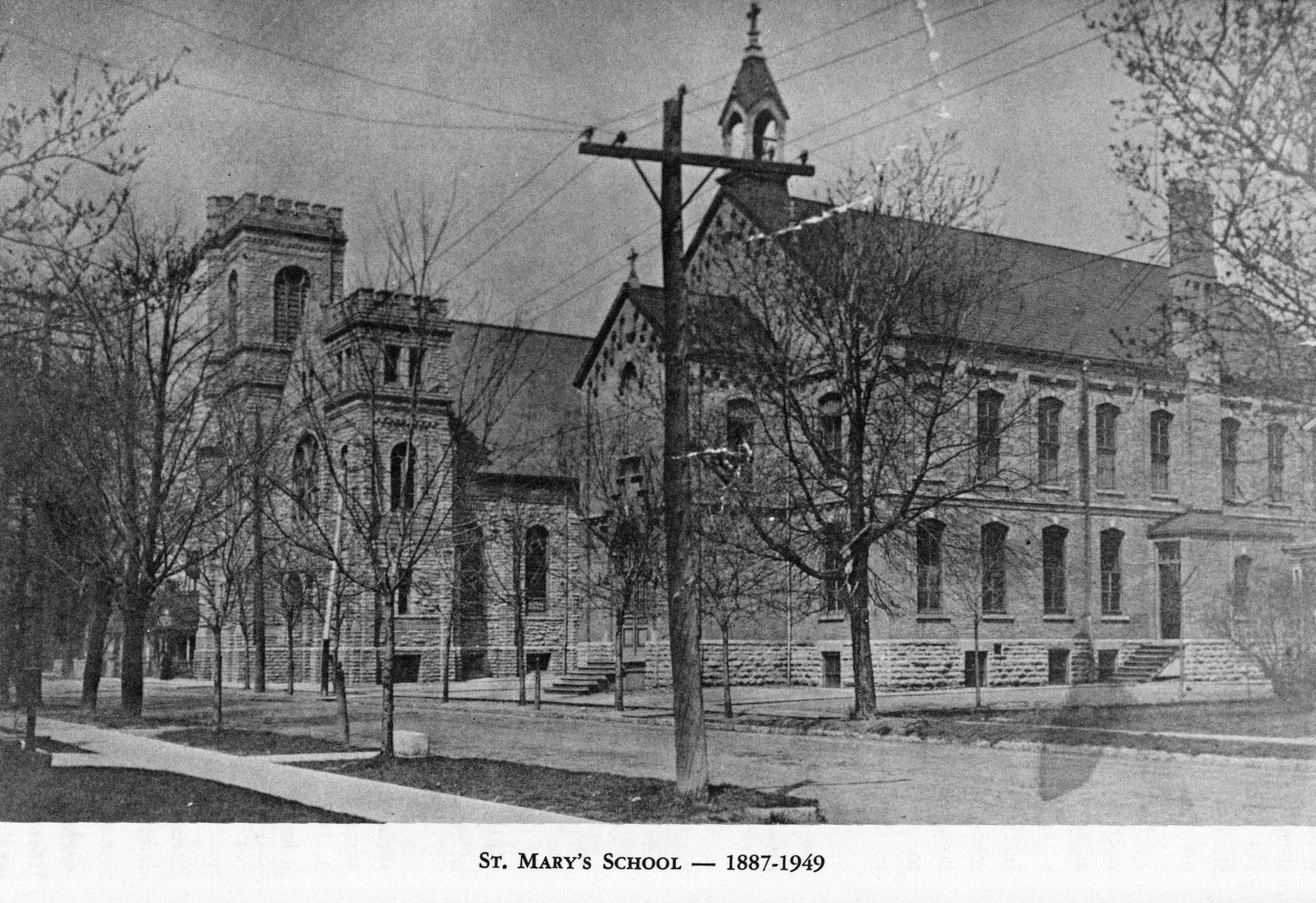 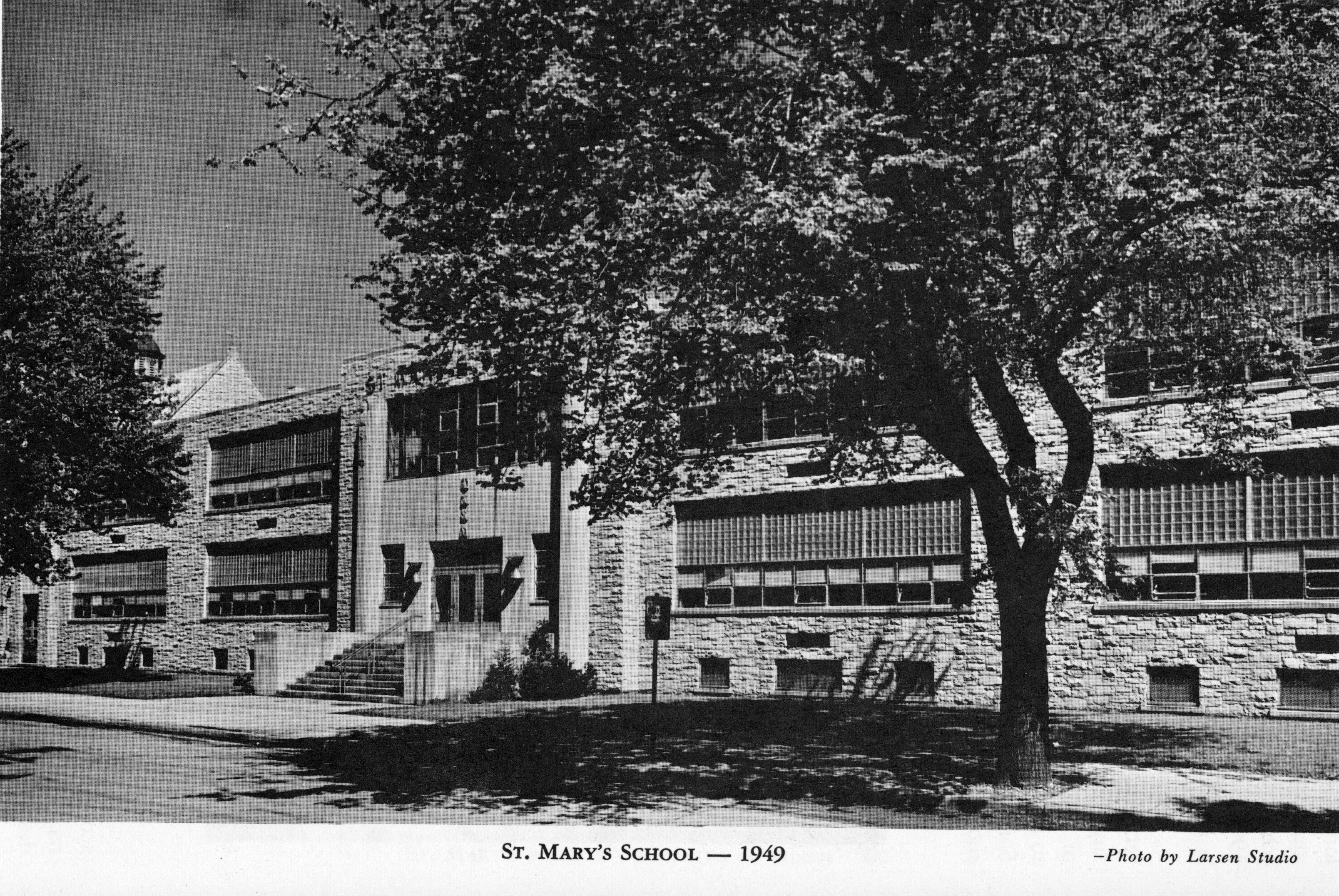 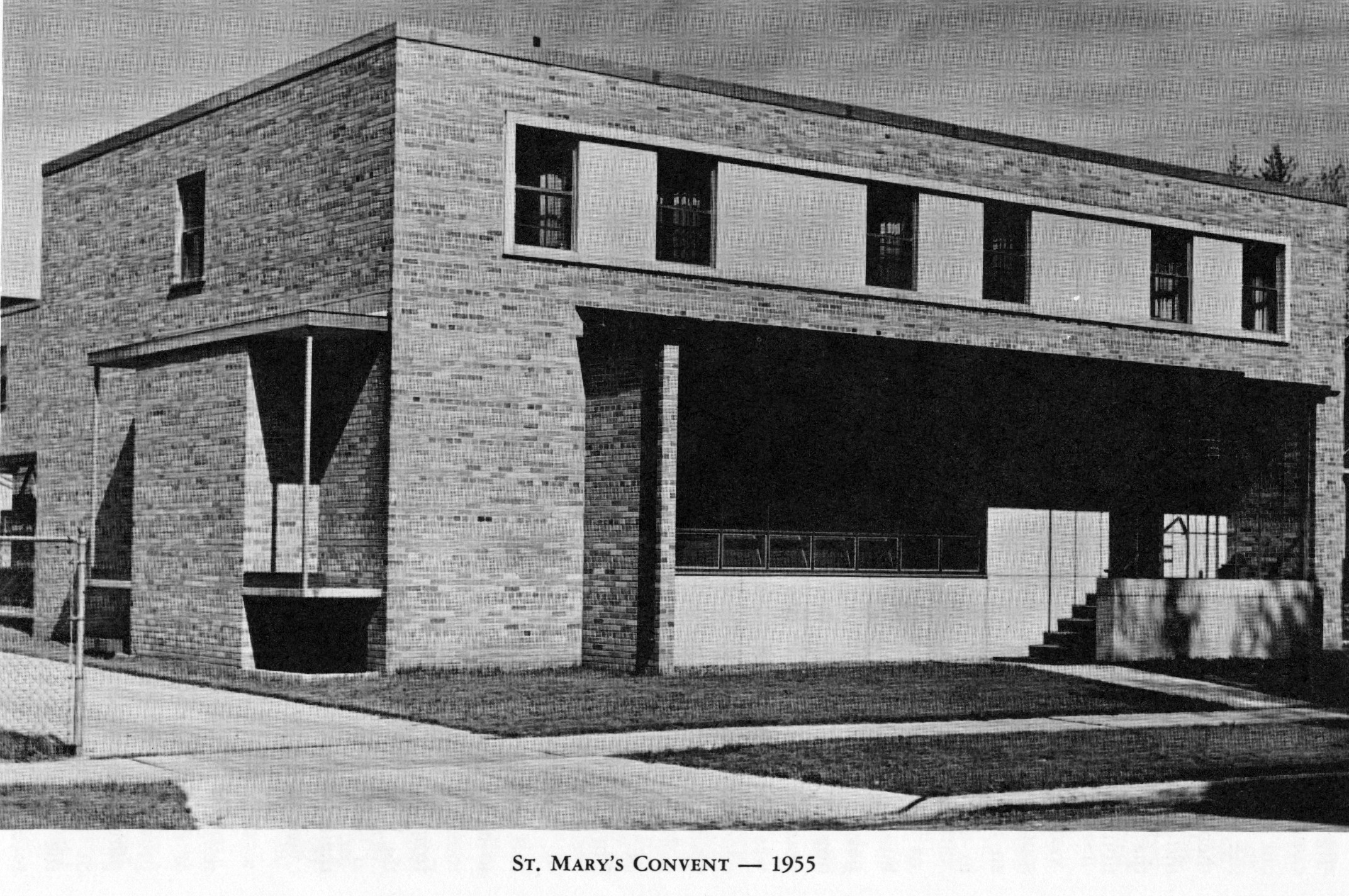 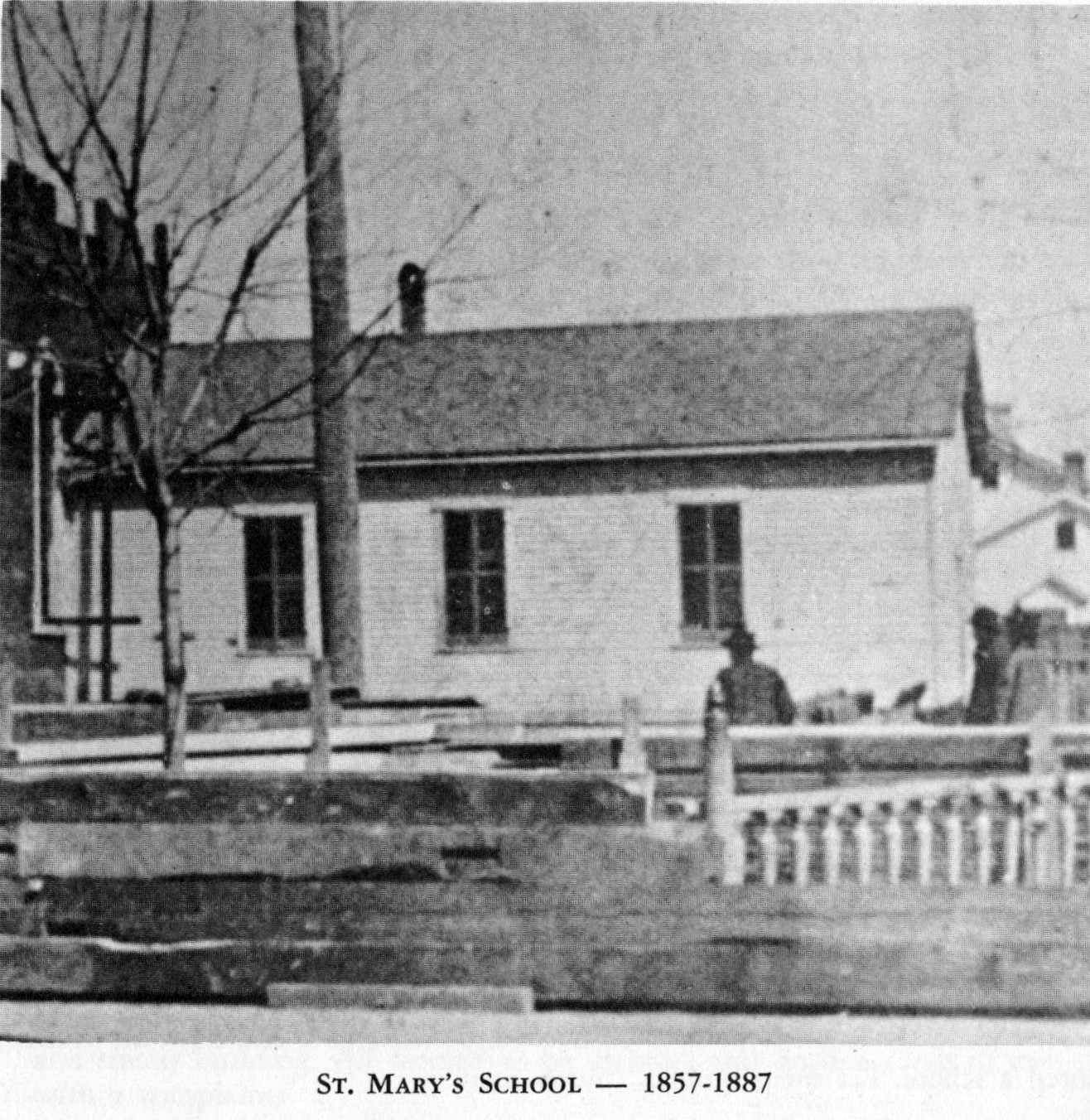 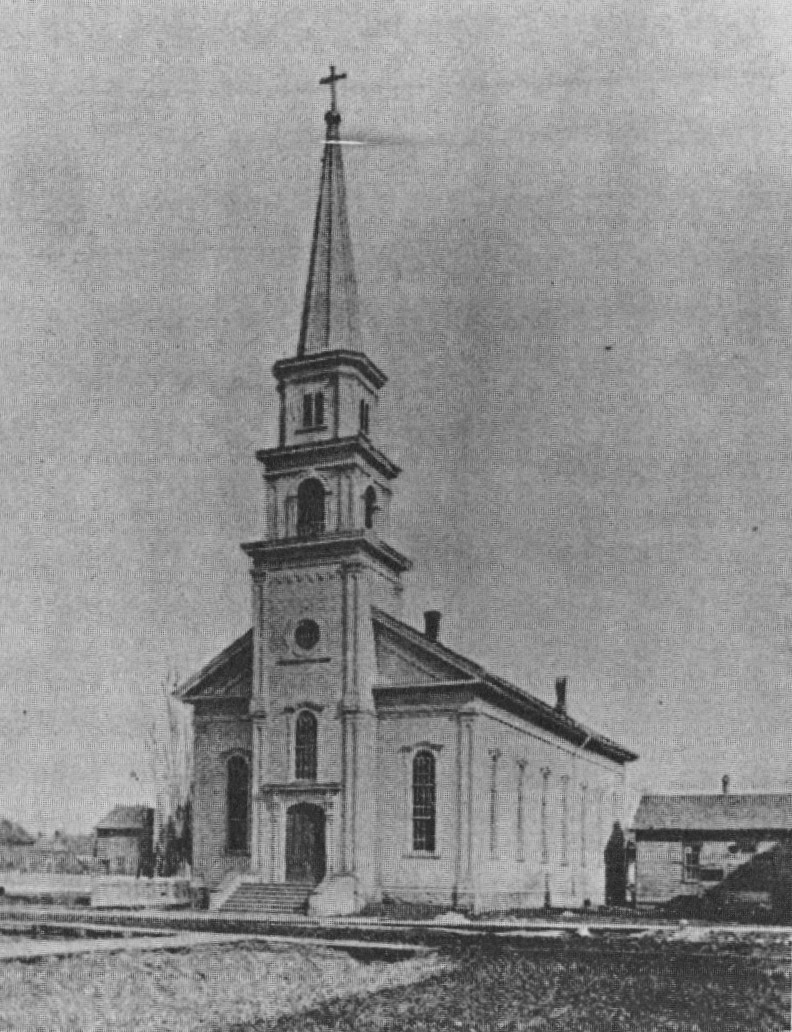 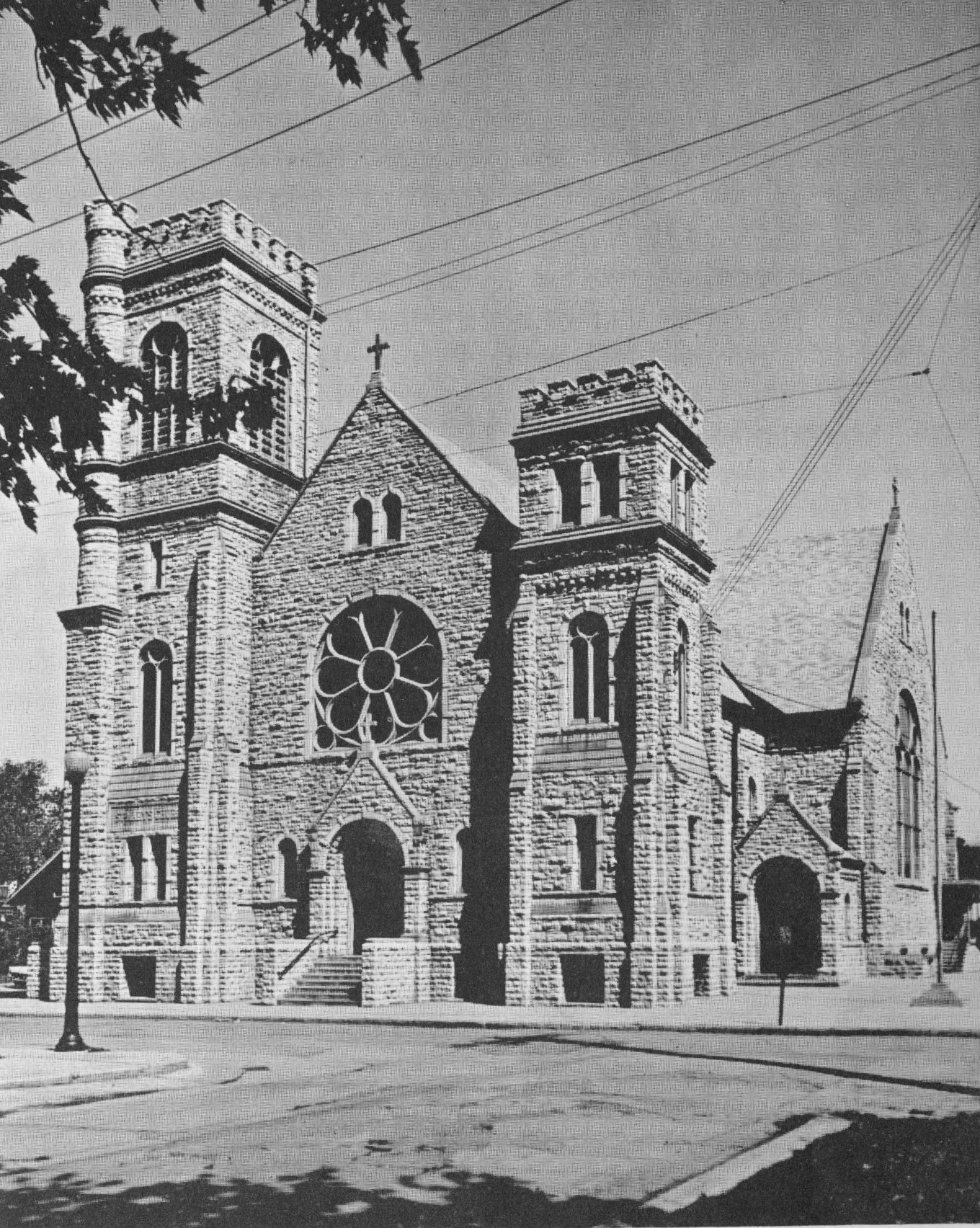 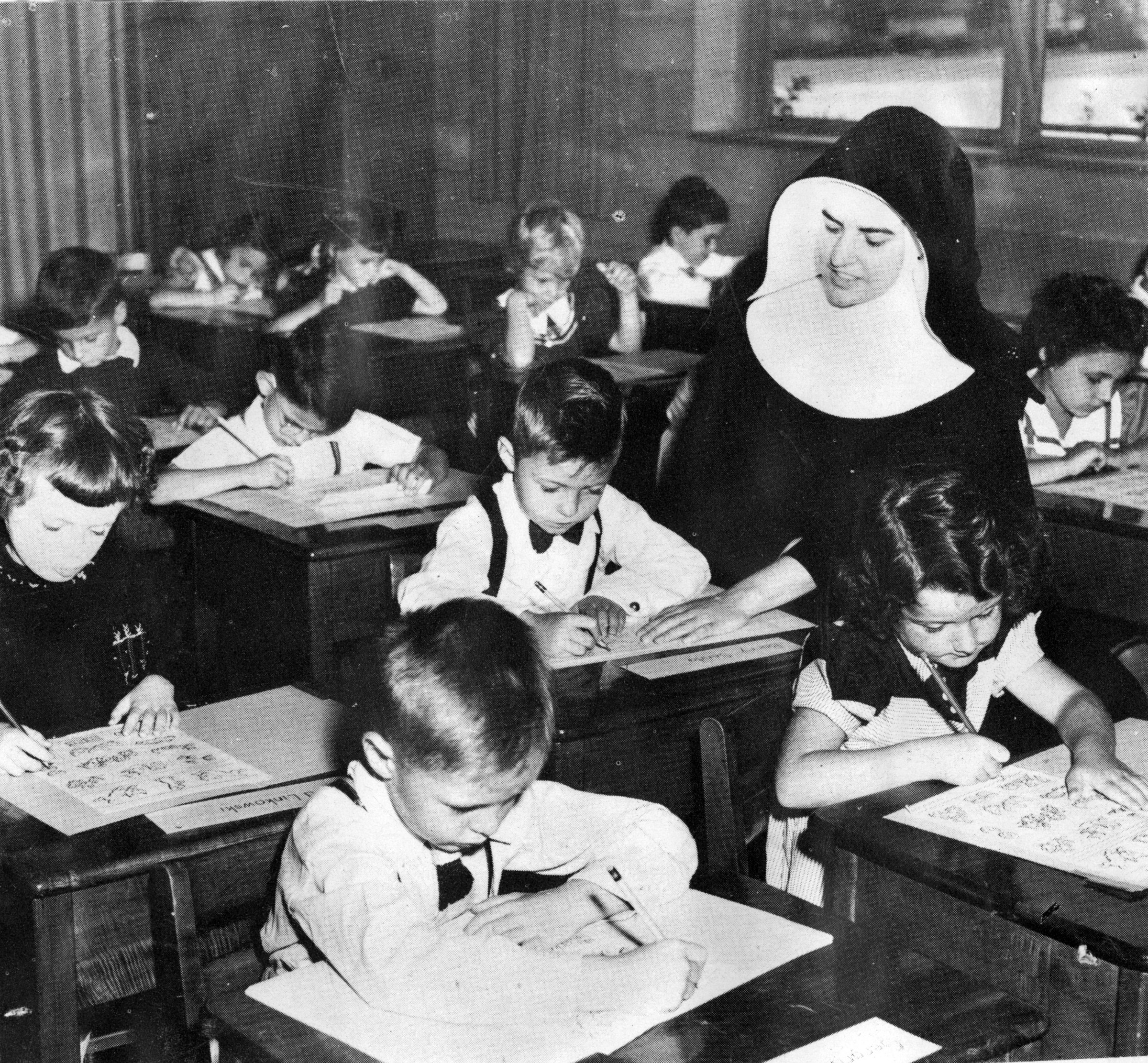 St. Mary’s School was founded in 1857 on Merrill Avenue in Fond du Lac, Wisconsin, by German immigrants wanting to educate their children. It was the first Catholic school in the city and was built eight years before St. Mary’s Church and parish were established.

Local citizens German Scherzinger, Anton Rothgery, and John Dana initiated the school project when the pastor of St. Louis Parish showed little enthusiasm for a school. The one-room schoolhouse was opened in 1857 with John H. Gores as the schoolmaster. St. Mary’s was a bilingual school with students learning in both German and English languages. It became known in the community as “The Old Dutch College.”

With a significant rise in German immigration to the area, the need for a German parish was urgent. The parish was established on November 15, 1865, comprised of 21 families. Land was purchased at the corner of Merrill Avenue and Marquette Street for $800. The 40’ x 60’ church was completed in late fall 1866 and dedicated by Archbishop John Henni on December 8, with Father Eusebius Hensler installed as the first pastor. Hensler stayed at St. Mary’s for a year before Father Nicholas Pickel took over.

By 1875 a rectory had been built behind the church and additions increased its size to 40’ x 108’. A pipe organ and raised pulpit were also installed. Three years later, lightning struck the building and started a fire that caused about $500 in damage to the structure, but ruined the church organ. The newspaper reported the lightning bolt struck the church bell and the sound alerted a policeman who quickly called in the fire department.

In 1879, Father Pickel was transferred out of Fond du Lac after difficulties arose with the parish trustees. Pickel was replaced by Father Francis Haas, OFM Cap., who, while a popular choice among many parishioners, had been disparaged for years by another faction of the congregation. Haas requested all collection monies be turned over to him as required by archdiocesan law, but the trustees refused. The trustees then incorporated the parish as a civil entity and tensions among the factions grew to the extent that a police presence was necessary at Masses. At the end of December, Haas announced that if the trustees did not turn over parish records, that day’s service would be the last in the church. Supporters of the trustees broke into the church, nailed up the pews, and demanded Haas leave. He refused and church was placed under interdict.

Mother Agnes Hazotte of the Sisters of St. Agnes offered the use of the convent chapel for Haas to preside over the Feast of the Circumcision, a holy day of obligation, when the city’s other pastors refused him. About two-thirds of the parish attended Mass that day at the convent and Father Haas promised them he would build a new church. On February 29, 1880, Sacred Heart Church was dedicated at the corner of Main and Merrill. Then on March 6, Father Sebastian Schwinn was named pastor of St. Mary’s. In a May 25 letter, Archbishop Henni stated that he never intended for the Capuchins to open a parish in the city and ordered that Sacred Heart be closed in three days. After an appeal by the Capuchins, Henni reversed himself and left the matter to be resolved by Rome. Ultimately, the Capuchins were asked to leave the city. Father Schwinn was replaced by Father Joseph Fessler, whose task it was to reunite the parish.

In the same year the discord began, the Sisters of St. Agnes began teaching at St. Mary’s. By 1883, a second classroom was built with an eye toward future expansion. On December 1, 1887, the new St. Mary’s school was dedicated by Archbishop Michael Heiss. A two-story red brick building that could accommodate 200 children was designed by Van Rynn and De Gellene architectural firm of Milwaukee and built by Julius Ley. The cost of the building was $7,700. The first floor held four classrooms and a hall while the second floor housed a gym and stage. The latest technology, including electric lights, was installed in the new building. The original school building was moved closer to the church and served as a winter chapel and then as an annex until 1901.

By this time, the congregation had outgrown the church and a new structure was completed in 1901, designed by H. Messmer and Son and built by Gordon Georgerson for $21,196. Archbishop Frederic Katzer dedicated the church on February 2, 1902.

St. Mary’s School was also undergoing changes. A two-room addition was built in 1900 and the gym stage was converted to classrooms in 1925. Under Father Peter Gersbach, the school no longer required the teaching of German language and classes were now all held in English, whereas students previously had been taught in German for half of the day.

The school could not keep up with increasing enrollments so fundraising efforts began in 1928. Parishioners made 1125 pledges for $75,499. Two homes on Rees Street were purchased for the new school site before the Great Depression hit and pledges dried up. But by 1938 fundraising efforts began anew and a parish meeting was held in 1939 to decide if the project should proceed. A plan was agreed upon and sent to Archbishop Moses Kiley for approval. He recommended waiting a year, then with the advent of World War II, construction of the new school was again put on hold.

In 1948, the building committee hired the architectural firm of Frank Stepnoski and Son and received permission from the archdiocese to begin building. Hutter Construction Company began work on June 12, 1949. The school opened in September 1949 and included a modern cafeteria and kitchen and 10-lane bowling alley for the nearly 600 students who attended that first day.

In 1974, St. Mary’s merged with St. Joseph’s School and in 1992, all Catholic elementary schools in Fond du Lac were united into Fond du Lac Area Catholic Education System (FACES). In this consolidated system, St. Mary’s served students in the intermediate and middle grades from 1992 to 2008, when the PreK-12 FACES-Springs Catholic Educational System was created. In 2016, the school was sold, converted into apartments and in 2017 was listed on the National Register of Historic Places.

In 2000, all Catholic parishes in Fond du Lac consolidated into one — Holy Family. St. Mary’s underwent a complete renovation in 2016 and continues to serve the Holy Family community with weekend Masses.