Historic Shepherdstown Museum is located in the former Entler Hotel. The museum details the history of Shepherdstown and houses many historical artifacts crafted by local artisans. Rooms are arranged to reflect the history of the community at different periods, ranging from the colonial era to the 20th century. At lunchtime on weekdays, local historians present oral accounts of the town's history. The museum also features an archives room for genealogical and historical research. The working replica of James Rumsey’s steamboat is housed in a boathouse on the museum’s grounds. 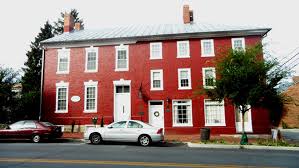 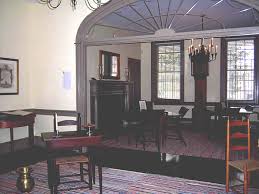 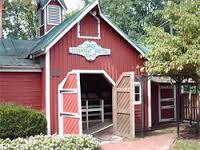 Established on an ancient Native American route, Shepherdstown originated as a farming community named Mecklenburg by the German immigrants that began settling in the area in the middle 1700s, Shepherdstown became an important center of trade along the Virginia colonial frontier.

The Entler Hotel is one of Shepherdstown's historical icons. The land around the museum was included in a deed from 1767 to a man named Christian Cookus.1 In 1786, Phillip Entler bought the west part of the lot from Cookus and built a brick house. This house burned in 1912. Cookus developed the rest of the property, building a two-story brick building to the east of Philip Entler and another building with an entrance on Princess Street. Eventually, Daniel Bedinger, who marched with Captain Stephenson on the Beeline March, purchased the remaining property and built a three-story structure that butted up against both of Cookus' buildings.2 Eventually, Bedinger owned all the property that now makes up the Entler Hotel.

In 1809, James Brown leased the building, and began operating a grocery store on the corner and sublet what is now the museum for a tavern. The “Globe Tavern” offered overnight accommodations and became a well-known meeting place in Shepherdstown. The hotel was entered from the Princess street entrance. Around 1811, the town council began meeting in the tavern. Brown and Edward Lucas bought the property in 1815. In 1820, Brown sold the property to Thomas Crown of Washington City. Daniel Entler, the grandson of Philip Entler, began managing the hotel.5 In 1824, Daniel Entler became the proprietor of the entire complex which now contained 24 rooms, 19 fireplaces, three cellars and three kitchens. It was known as Daniel Entler's Tavern or Hotel, until 1850, when it was shortened to the Entler Hotel. Entler and his six children lived in the original Philip Entler House on the west side of the lot.

The Entler Hotel was used a Union hospital after the Battle of Antietam. Hotel operations continued until 1912 when a downtown fire damaged several buildings, including the Entler.3 The hotel was renovated and reopened in 1914 as the Hotel Rumsey. Hotel operations ceased for the last time in 1917, and the property was eventually acquired by Shepherd College. The college opened the building as a men's dormitory named Rumsey Hall. It was used for a limited time for U.S. Navy and Air Force Cadets before being converted to faculty housing. Concerned locals saved the building from demolition in 1972 and petitioned to have the building placed on the National Register of Historic Places in 1973. In 1979, an organization named “Historic Shepherdstown” began renovating the property and opened the museum in 1983.

Historic Shepherdstown and Museum is dedicated to preserving the heritage of Shepherdstown, its history, and architecture. The group worked to have the National Register of Historic Places designation extended to include the Shepherdstown Historic District. Some of the artifacts displayed in the museum include three clocks made by Jacob Kraft in the late 1700s, several Sheetz rifles, and many other items dating from the Revolutionary period. There are also items displaying items from the early 1800s.

Many of the hotel’s rooms have been recreated to reflect different periods in the town’s history. The Civil War display has been set to portray the lives of five different people as they lived in 1861, the dawn of the Civil War. The lives reflected represent a child, a slave, a preacher, a soldier, and a matriarch. Each room demonstrates life as it was lived by these segments of society. Another of the museum’s exhibits is the working replica of James Rumsey’s steamboat. The ship is housed in a boathouse located in the Entler’s garden area. This functional replica was built by the Rumseian Society, a group that seeks to preserve and promote the inventive genius of Shepherdstown’s James Rumsey. Rumsey invented his steamboat twenty years before Robert Fulton demonstrated his ship.4

HISTORIC MUSEUM: April thru October on Saturdays 11am to 5pm & Sundays 1pm to 4pm. For private tours. Please contact: 304-876-0910 to arrange a private tour. ENTLER HOTEL:Open to the Public Located in the oldest extant section of the Entler Hote