One of the most controversial monuments in the United States, this memorial was erected in 1891 to honor white supremacists who attempted to overthrow the government of Louisiana in 1874. The monument was moved and modified, and was the subject of decades of heated debate regarding its proper disposition. In April 2016, city officials called for the monument's removal. While a vast majority of New Orleans residents wanted the monument removed, the state legislature intervened and in a series of partisan votes, enacted measures that took the authority to remove monuments from city leaders. After two years of demands by residents, state legislators voted against further actions to block the city from removing the monument in early 2017. On April 24, 2017, (a date that a few states still celebrate as "Confederate Memorial Day") workers disassembled and removed the monument under the cover of darkness, protected against possible white supremacist violence by police snipers. Mayor Mitch Landrieu stated in a speech (in the video below), "We will no longer allow the Confederacy to literally be put on a pedestal." The controversy surrounding the monument reflects the violent event the monument was meant to commemorate. Following the victory of a Republican ticket composed of Black and white candidates in the election of 1874, five thousand members of the Crescent City White League attempted to seize control of the state government by force. The attempted coup led to an armed confrontation between members of the racially-diverse police force. Thanks to the presence of federal troops, the attempted coup failed. However, the Battle of Liberty Place continues to represent the most deadly attack on an American police force. While the interpretation of the battle has changed, it is important to note that this monument was created to honor the members of the White League. In the 1990s, the monument was altered to include a plaque that honors the fallen officers who attempted to preserve democracy. In 2015, a special commission established by the city council recommended the complete removal of this monument. Demonstrating the ways that political parties can change over time, modern-day Democrats are in favor of removing the monument while Republicans defend the structure as part of the state's heritage.

Perhaps the most controversial of all the "Lost Cause" memorials in the United States, this monument was built to honor the defenders of white supremacy.

Given the controversial nature of the monument, city officials arranged a compromise between its opponents and supporters. The city moved the monument to this location where few tourists will see it. 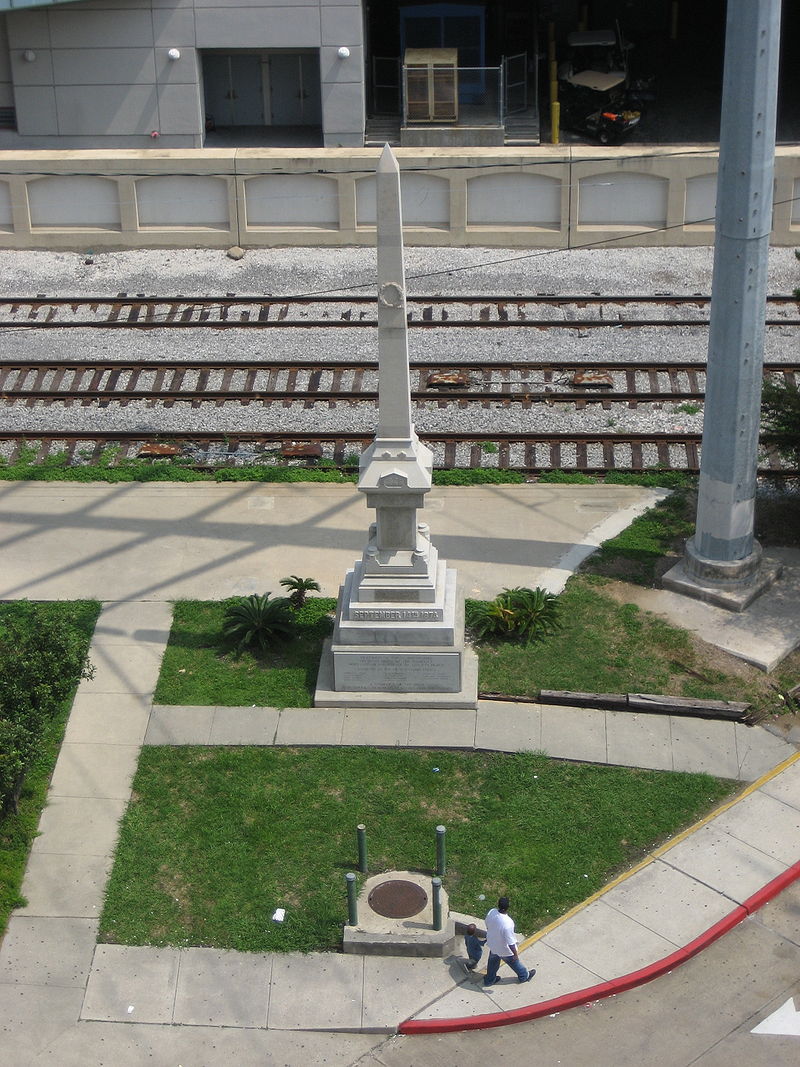 This is one of two inscriptions that demonstrate the original intent of the monument-honoring those who stood for white supremacy. 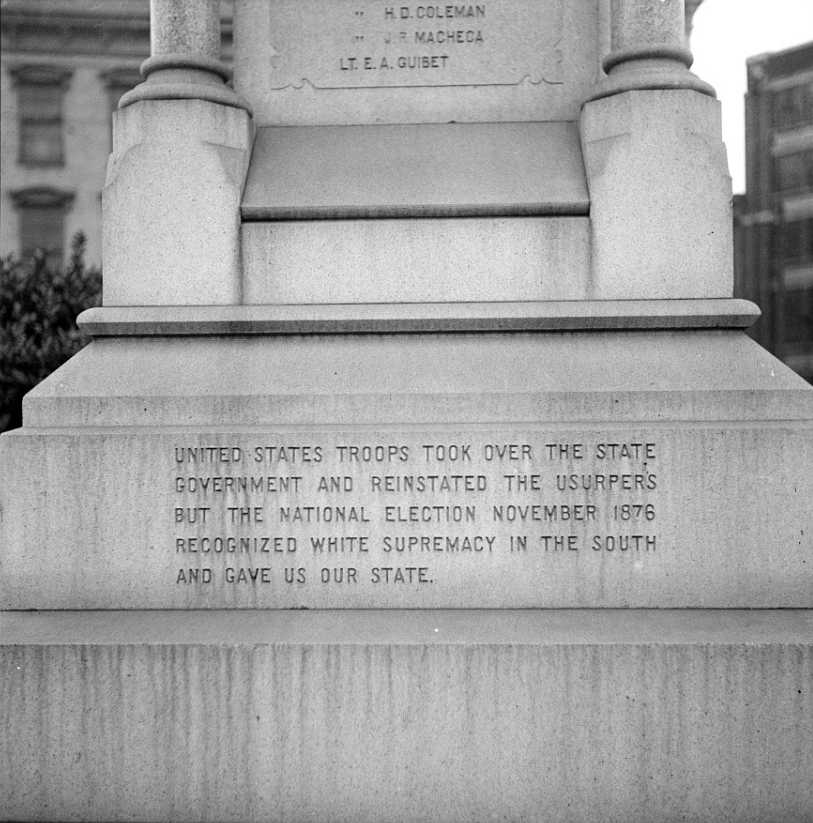 This granite tribute to the police who lost their lives defending the government was added a century after the monument was created. 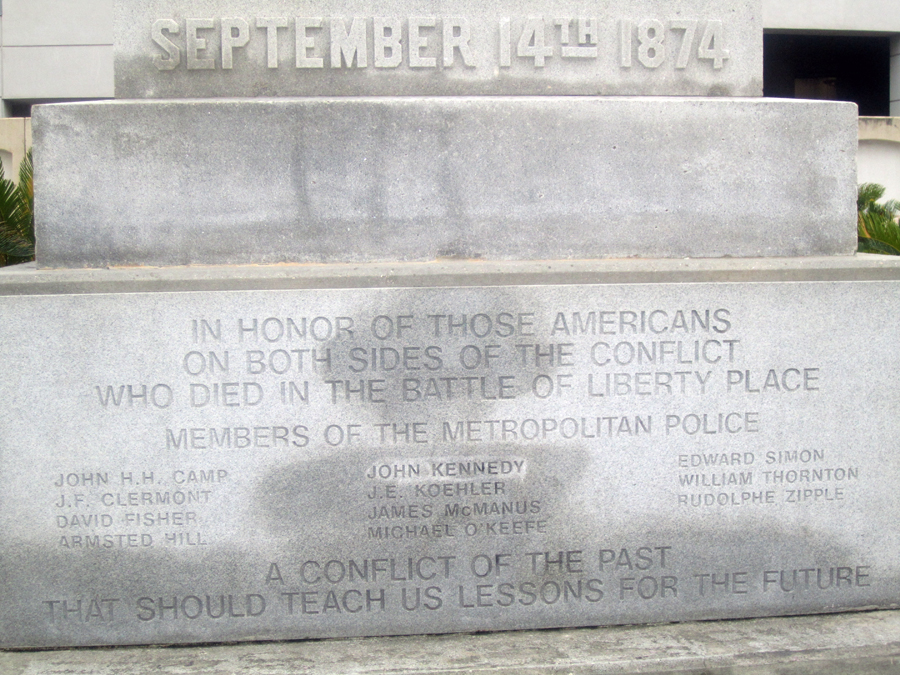 Learn more about the Civil War and Reconstruction throughout Louisiana with this book from LSU Press-click the link below to learn more. 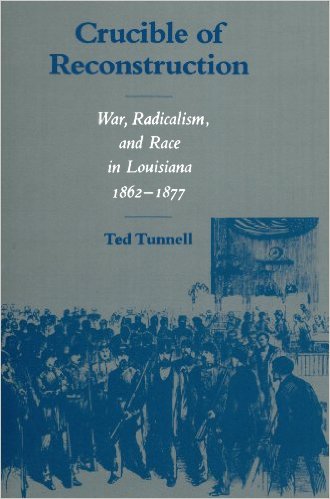 New Orleans after the Civil War: Race, Politics, and a New Birth of Freedom by Justin Nystrom. 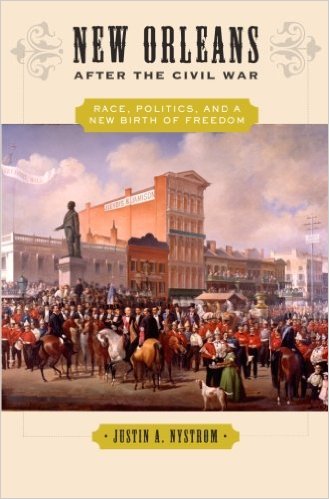 In the aftermath of the Civil War, the Republican Party began to win elections in the South owing to the temporary disenfranchisement of prominent Confederates and the fusion of newly-enfranchised African Americans with progressive Southern whites. Angered by the success of the Republican Party, a political organization that scarcely existed in Southern states prior to Reconstruction, angry whites under the auspices of the Ku Klux Klan and similar secret societies committed acts of terror against white Republicans and any African Americans.

The violence was repeated in the next two years, but so long as federal troops were present, the White League was forced to retreat and the democratically-elected government of Louisiana was restored. Following the Presidential election of 1876, however, national Republican leaders agreed to a compromise that included the withdrawal of federal troops from the South. The Republican Party won the next election, but without federal troops to enforce the results of that election, white paramilitary groups seized control of the state and installed members of the Democratic Party under the banner of "redeeming" the state from former slaves and white Yankees.
Demonstrating the ways that historical interpretations change over time, this monument was created in 1891 to honor the white supremacists who, after several years of violent attacks, forced the legally-elected Republican officials of Louisiana to flee for their lives. Reflecting the long history of white supremacy, New Orleans officials added an additional plaque honoring the Crescent City White League.
In response to the protests by African American residents, the city added a sign next to the monument in the 1970s that attempted to appease both the white defenders of the monument and African American voters who had just elected the city's first back mayor. The sign offered a statement defending the historical significance of the monument but distancing the modern city of New Orleans from the racist sentiment behind its construction. In 1981, the city government attempted to have the monument removed but backed down in the face of angry protest by white residents.

The monument stood at a prominent location on Canal Street until 1989, when nearby construction led to it being placed in storage. The monument was moved to its present location in 1993 and a slab of granite was placed over the inscription that had once praised the White League's efforts to "overthrow [the] carpetbag government" by force of arms and install a new government that "recognized white supremacy in the South and gave us our state." The monument also  received a new plaque, created in a compromise, calling for honor and remembrance for "Americans on both sides of the conflict."

Selk, Avi. "New Orleans removes a tribute to ‘the lost cause of the Confederacy’ — with snipers standing by." Washington Post, April 24, 2017. https://www.washingtonpost.com/news/post-nation/wp/2017/04/24/new-orleans-removes-a-tribute-to-the-l...